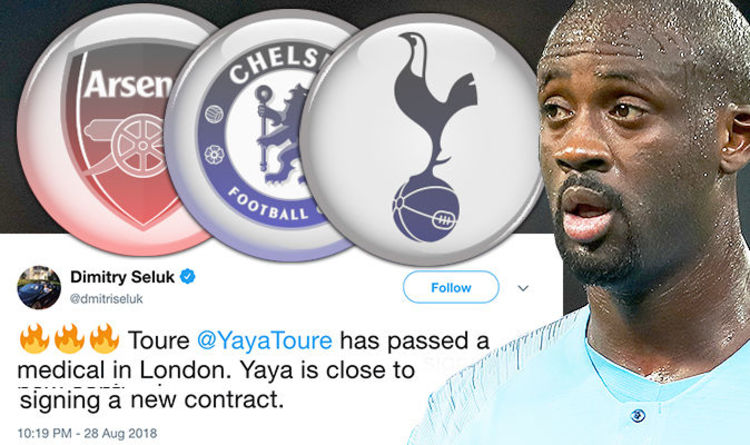 Toure spent eight years with Manchester City before being released this summer.

He won three Premier League crowns during his time at the Etihad and has been linked with a host of clubs across Europe since becoming a free agent.

In May, Toure’s agent Dimitry Seluk insisted his client was keen to remain in the Premier League after leaving City, revealing he would be willing to take a cut on his wages if his new club were not satisfied with his performances.

“Yaya is fit and desperate to prove he’s still the best central midfielder in the Premier League,” Seluk said.

“Ivory Coast will not be in Russia for the World Cup and next season he will be fit, rested and stronger than ever.

“He’s happy to accept a one-year deal to stay in England.

“If his club are not satisfied with his performances, he will pay back half his wages, or the club can cancel his contract immediately, with no compensation.”

Toure, though, appears to have found a new club in London with Seluk’s latest comments indicating that an announcement over the 35-year-old’s future is imminent.

Yaya Toure next club: What has his agent said?

Toure’s agent revealed on Twitter that the former City midfielder had passed a medical in London.

Seluk wrote: “Toure @YayaToure has passed a medical in London. Yaya is close to signing a new contract.”

Fans queried if West Ham or Crystal Palace was the unknown destination for Toure but Seluk was quick to rule out both clubs.

“It’s not Crystal Palace, 100%. Roy Hodgson said he doesn’t know when his players’ birthdays are. Can Yaya go there?”

Yaya Toure next club: Could he join Arsenal, Chelsea or Tottenham?

With his agent branding Toure “a champion”, it suggests a move to Arsenal or Chelsea would be more likely with both sides having won the Premier League previously.

Spurs could be a possible destination for the former Barcelona star but it’s unlikely he would fit into their wage structure.

However, according to Ladbrokes, Arsenal and Fulham are neck-and-neck to land Toure.

The betting company make both clubs 6/4 favourites for Toure’s signature.

Ladbrokes spokesperson Alex Apati said: “Yaya’s Premier League experience wouldn’t go amiss at any club in the top-flight but the latest odds suggest it’s Arsenal and Fulham who are closest to sealing a deal.”

Despite the Gunners being one of the favourites, Football London journalist Charles Watts insists the player will NOT be moving to the Emirates.

He tweeted: “I’m sure none of you are thinking this Yaya Toure stuff has anything to do with Arsenal, but just in case there is any doubt – If he is moving to a London club, it is certainly not Arsenal.”

Yaya Toure next club: Is he joining Olympiakos?

Recent reports suggest Toure is set to join Olympiakos despite his agent’s comments.

The Mirror say Toure is instead set to continue his career in Greece with Olympiakos.

The Ivory Coast international moved to the Greek side in 2005 and won the double.

He then moved to Monaco a year later after enjoying a fine tournament at the 2006 World Cup.

The Mirror say Toure will earn £2m after tax.

However, he will not be registered for Olympiakos’ crunch Europa League clash against Burnley on Thursday night.

From Munich to Voyager: How an Olympic image achieved immortality

Football transfer rumours: Felipe Anderson in, Sokratis out at Arsenal?

September 3, 2020
image copyrightEPAimage captionThe Israel Antiquities Authority said the capitals were the most beautiful and impressive yet foundIsraeli archaeologists have discovered what they say is...

Trump to head to Louisiana as Hurricane Laura cleanup starts

Brit Cameron Norrie will scoop at least £123,000 from the US Open after beating Federico Coria