Men with long facial features and large eyes, and women with slim faces and small eyes are percieved as more promiscuous, a new study has revealed.

However, this perception only rings true for men, and not for women, according to the researchers.

In the study, experts in Australia asked heterosexual men and women about their levels of ‘sociosexuality’ – the willingness to engage in sexual activity outside of a committed relationship, also known as casual sex.

The participants also had their photos taken and shown to other participants of the opposite sex, so they could judge, based on looks alone, if they had an interest in sociosexuality.

So while these may be the physical traits men look for when up for a one-night-stand, either consciously or subconsciously, they might not indicate that the woman is up for it. 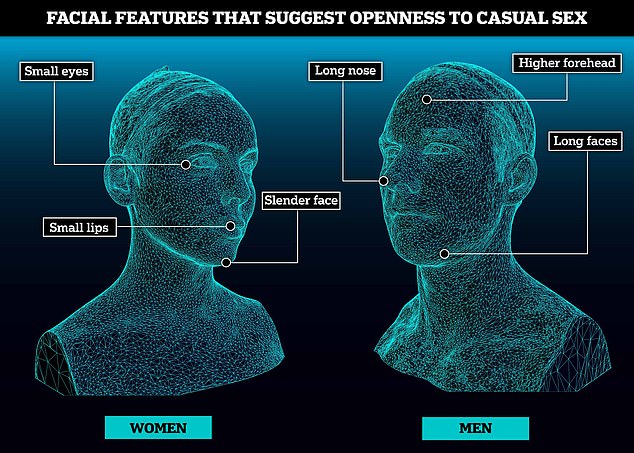 In essence, the results suggest women are good at correctly identifying physical characteristics in men that indicate interest in a one-night-stand, but not the other way around.

The study authors, from Macquarie University in Australia, had wanted to learn more about whether sociosexuality is written in our faces.

‘When we are looking for a new partner, we might be looking for different things,’ said study author Professor Ian Stephen.

‘We decided to see whether people’s intentions might be revealed by their faces.’ 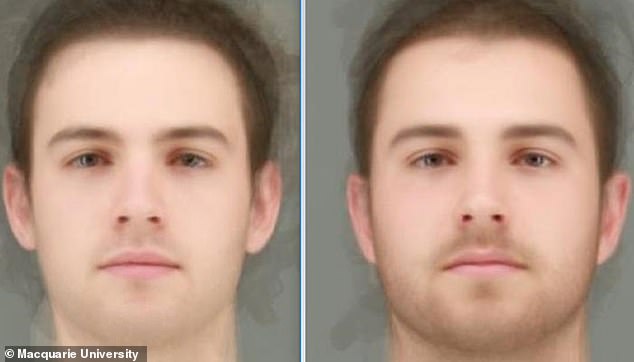 Composite images of the average faces of the men who were least (left) and most (right) open to casual, short-term connections, which women were able to determine 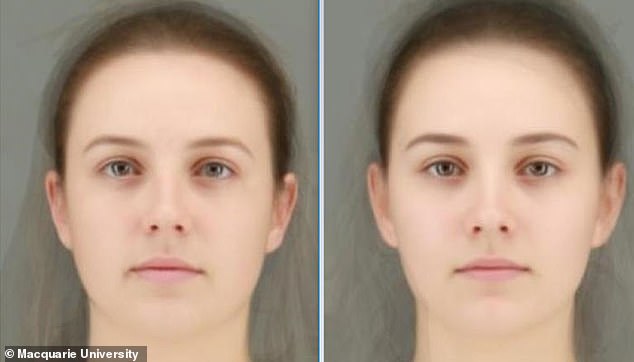 More inscrutable: Composite images of the average faces of the women who were least (left) and most (right) open to casual, short-term connections, although men found it difficult to determine the difference overall

CASUAL SEX IN THE COVID ERA

Covid-19 has made us rethink everything – especially sex.

The sexual freedom many previously enjoyed – having commitment-free sex that is no longer frowned upon – is no longer just a swipe away.

Dating studies say lots of people, particularly women, stopped looking for a prospective partner once it became clear the virus was dangerous.

The Kinsey Institute in America launched an ongoing sex and relationships study in March 2020 and found about half of those involved are less sexually active than before.

Research indicates the same is happening in the UK and Australia.

Video platforms are also making sexual activity virtual in the time of Covid.

Read more: Sexpert Tracey Cox reveals how to hook up safely during the pandemic

For the study, just over 100 Caucasian people, all with an average age of 20 years, were photographed and asked to complete the Sociosexuality Orientation Inventory-Revised (SOI-R).

These photographs were then shown to members of the opposite sex who were asked to complete the questionnaire on behalf of the person in the photograph, to assess how sociosexual they were.

‘It turned out that women were really good at judging whether men were only interested in short-term uncommitted relationships,’ said co-author Joe Antar.

‘This is a really valuable skill to have, as it would allow women to make subconscious decisions about which men would be a good fit for them, according to their relationship goals.’

Men, on the other hand, were not able to accurately make similar judgements about women based on their photographs.

In other words, men were not as good at judging if women were only interested in casual sex.

‘This surprised us,’ said Professor Stephen. ‘The ability to make these judgements would also be really useful to men who are trying to judge who might be interested in short-term uncommitted relationships, and who might be more interested in something longer-term and more serious.’

This difference between led to another question, which the researchers attempted to answer with the help of artificial intelligence (AI). 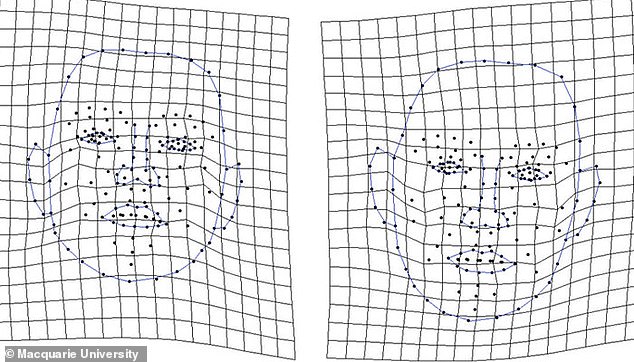 AI at work: Visualisations of the facial shapes that the computer algorithm identified as looking less (left) and more (right) open to casual connections

‘In this case, we should be able to teach a computer algorithm to correctly make judgements about men’s but not women’s relationship intentions.

‘If the computer could do just as well with both men’s and women’s faces, the gender difference must be in the brains of the observers.’

The results were clear – the AI could make accurate predictions about the relationship intentions of men from their faces, but not about the women.

‘We think this points to a role for testosterone,’ said Antar.

‘Higher levels of testosterone are associated with more masculine-looking facial features, and with more male-typical behaviour like interest in short-term, uncommitted relationships.

‘Because testosterone plays a much smaller role in female development, this would also explain why the information about relationship intention does not appear to be present in women’s faces.

‘But we need to do more research to know for sure.’

The study has been published in the journal Evolution and Human Behaviour.

Women tend to regret casual sex more than men – but not enough to stop themselves from having more one-night stands, according to a 2021 study.

But women who do regret a one night stand don’t feel bad enough about it to change their behaviour for next time – likely due to the power of a high sex drive.

The research team previously found 35 per cent of women feel guilty about having casual sex, compared with 20 per cent of men.

Read more: Regret does not keep people from avoiding future one night stands 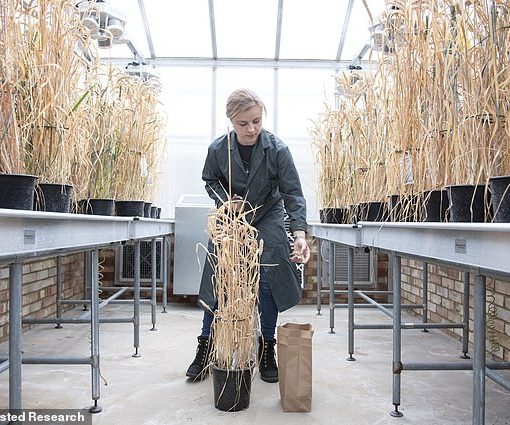 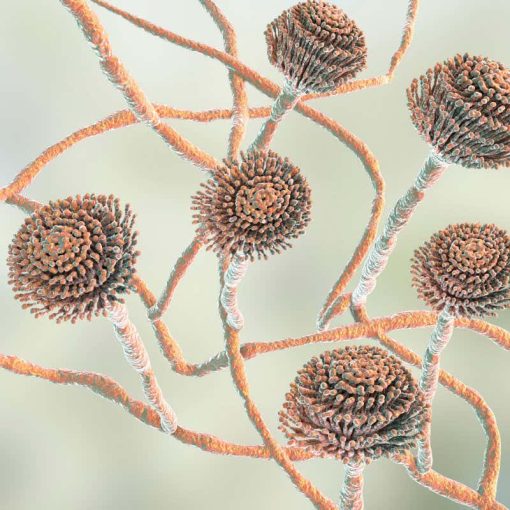 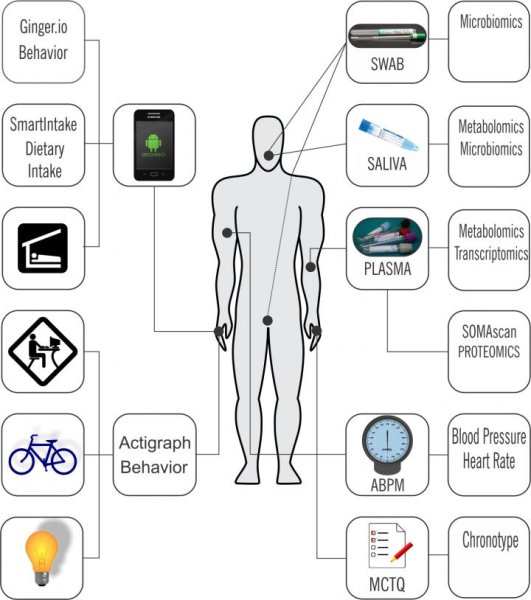 A pilot study collected physiological information from six healthy young male volunteers as they went about their normal daily lives. Thousands of […] 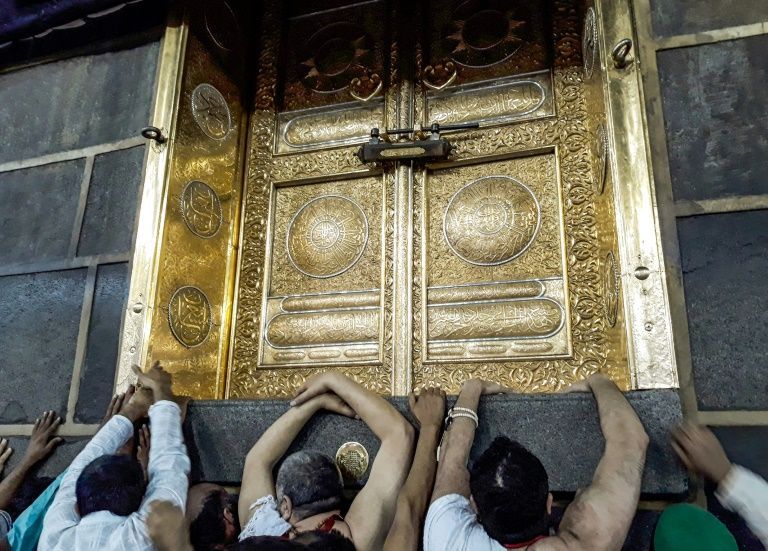