MALIBU, Calif. — Look, but don’t make it obvious. Is that Bella Hadid? Or, is that a person who’s worked extremely hard to make herself look like Bella Hadid?

Some are regulars, power lunching; others celebrate special occasions (including the win of the reservation itself, still borderline impossible). But everyone’s playing some version of this game: Look! Is that …?

In this light, with this many paparazzi on the sidewalk, the answer isn’t immediately obvious. Nobu Malibu is one of those places where the veil between worlds is so thin, the famous and the famous-adjacent blur together. Time itself goes syrupy.

Was anyone surprised to see pixelated photos of Jennifer Lopez and Ben Affleck here just a few weeks ago? No, because Nobu is 2002 and Bennifer and frosted tips. Nobu is Vanessa Carlton, making her way downtown, and Season 5 of “Sex and the City” shaken together and poured into a tall-stemmed glass.

A visit now should seem predictable and dated and maybe even mildly embarrassing, like coming across an old photo of yourself in a dress over bedazzled jeans. But somehow — and this is a part of Nobu Malibu’s magic — it doesn’t.

Maybe it’s because the restaurant, which opened in its current beachfront location in 2012, isn’t entirely stuck in the past. There are often new dishes on the menu, from a kitchen led by Gregorio Stephenson, and a sushi counter led by Toshiyuki Shiramizu. Some of them stay on, like the bright, fluttering, raw artichoke salad dressed with yuzu juice, only to be replicated at other Nobu locations.

Some of the best dishes are the simplest — pristine pieces of fish dressed in brilliant citrus juices, seasoned with a concentration of dehydrated miso or a minuscule dab of chile paste or a single, tender leaf of cilantro. The rolls of crab and avocado in yuba are barely embellished at all, but wonderfully sweet and luxurious. The head-on grilled prawns are a juicy, delicious mess.

You might be tempted by the miso cod that Nobu Matsuhisa made famous — a dish from Kyoto known as saikyo yaki. Mr. Matsuhisa cured the fish directly in miso and sweetened it for American tastes using mirin and sugar. It remains on the menu of every location, forever and always. There’s even a version of smaller pieces of slippery, white-fleshed cod, in the same glaze, in lettuce cups, because the restaurant is completely aware that first-time diners feel pressure to try it, but might not necessarily want a whole slab of an entree.

But I wouldn’t bother ordering either. Other old dishes, like the teeny, melt-away uni tacos, perfectly constructed in fried won ton skins, and the buttery monkfish liver pate with caviar and green, unripe yamamomo, or Japanese mountain peach, have aged so much better.

Still, understanding the development of Nobu’s version of miso cod is key to the sway of the chain.

Mr. Matsuhisa was born in Saitama, Japan, the youngest of 4 children. When he was 8, his father died in a motorcycle crash. When he was a teenager, he was expelled from high school and started working in a small, family-run sushi restaurant in Tokyo, accompanying the head chef to the market every morning, carrying his boss’s basket of cold fish.

What he learned in Tokyo was traditional, but a few years later when a regular offered him a partnership at a restaurant in Lima, Peru, he embraced local South American fish, different from what he was used to, and a whole cast of ingredients he’d never dreamed of applying to sushi before, from lemon juice and cilantro to olive oil and tomatoes.

In the United States, he tried soft-shell crab for the first time, and put it in a sushi roll. When a diner turned up her nose at pieces of raw fish, he cooked the surface with a splash of hot oil to make it more palatable to her. He cut squid into noodles for a child who wanted pasta. Mr. Matsuhisa’s mythology as a chef and businessman has been built around these ideas of experimentation and hybridization — his capacity for adapting the Japanese flavors he knew to please diners all over the world, like with the miso cod.

At this point in his biography, circa 1987, when he opened Matsuhisa in Beverly Hills, Madonna and Barbra Streisand become regulars, and celebrity becomes inextricable from his work.

Mr. Matsuhisa’s collaboration with Robert De Niro and Drew Nieporent produced the first Nobu in New York, and then a chain with 46 locations around the world, from Budapest and Moscow to Kuala Lumpur and Dallas.

For a short time during the pandemic, I wondered if restaurants were revealing themselves to me more completely, if takeout was a way of seeing a whole restaurant compressed into a box, stripped to its truest, barest self: just the food, packed up to go.

Of course I was wrong, and that’s obvious now, but I didn’t realize quite how wrong until I went to Nobu Malibu, just as vaccinations were becoming more accessible and dining restrictions were lifted in Los Angeles.

I’d forgotten how an enthusiastic, fast-moving, highly attentive team can make you feel. The vibes people can create and sustain by making the unrelenting demands of their work look effortless.

At Nobu Malibu, it’s not just the cooks and servers who are pros, who know their work inside out. The bussers are pros. The valets are pros. The man who weaves around tables at dusk to close the umbrellas and turn on the heat lamps as the temperature drops is a pro. And everyone on staff seems to have received formal training as a substitute Instagram boyfriend, ready to patiently take photos of you in front of the ocean — vertical, horizontal, and now one where you’re looking over here, perfect.

Nobu Malibu may be part of a chain — a gigantic, high-end, international chain — but its pleasures aren’t exactly replicable.

The food is good, better than it needs to be considering the commercial power of the brand and the loyalty of its customer base, but the food is also nothing on its own. Without the charming, erudite server whispering conspiratorially to you that, you know what, the caviar white out really isn’t worth it. Without the celebrity spotting, without the clean cuts of fish, vivid and transparent in the sunlight, without the birds surfing the breeze at eye level and the ocean crashing below ledges of thirsty, flowering succulents.

The food is good, but it’s not the point. If you want a respectable piece of miso cod, you can go to a number of places, including, obviously, any Nobu location. But if you want the salt-spray and the vibes, you’ll have to go to Malibu. 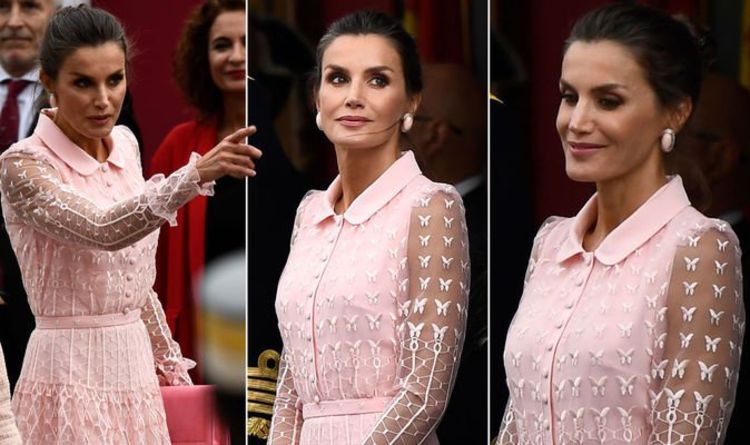 Queen Letizia, 47, attended a military parade in Madrid, Spain today alongside her husband King Felipe and their two daughters. The royal […]

A Tennessee woman who was livestreaming rising flash-floodwaters drowned shortly after recording the video. Linda Almond, of Waverly, Tenn., was on the […] Nicole Kidman’s anniversary tribute to husband Keith Urban will have you reaching for a glass of water. My oh my. Nicole Kidman […]