A huge photograph album charting an Edwardian family’s holiday to the Middle East that could rival the Instagram holiday-makers of today has emerged 112 years later.

The vast album contains 500 photographs and postcards that were taken by the snap-happy Bowen family.

The husband, wife and their two grown-up daughters were prolific photographers and captured almost every step of their month-long trip.

They left the UK from Southampton by boat on March 4, 1908, and the photo album runs chronologically after that. 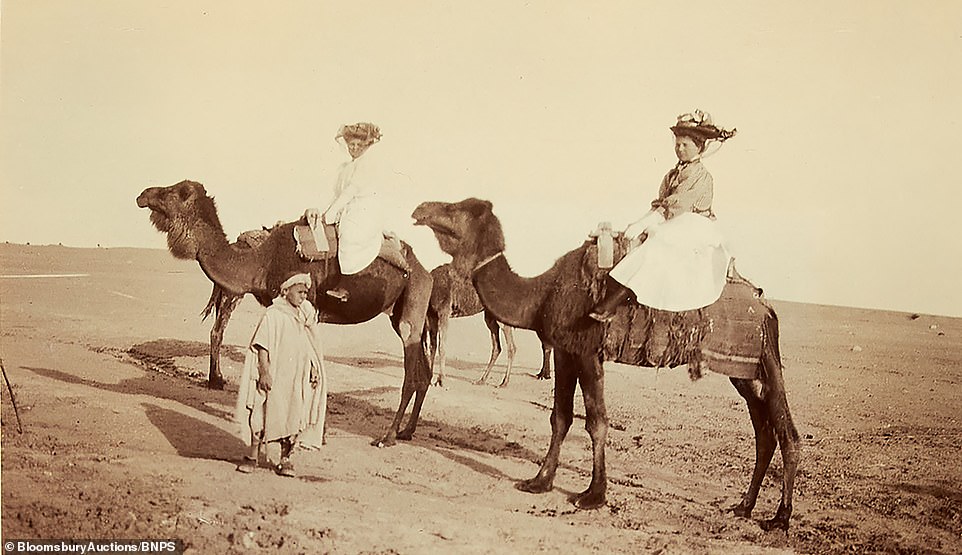 A huge photograph album charting a wealthy Edwardian family’s holiday to Morocco, Tunisia and Algeria has emerged 112 years later. Pictured: Two of the Bowen family ride camels in the desert 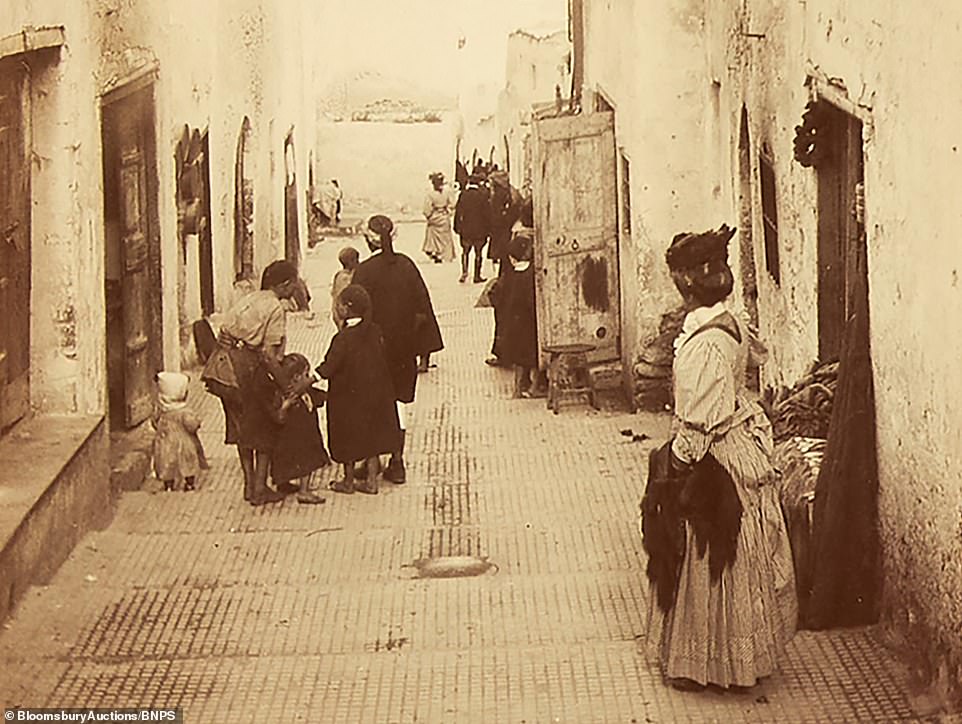 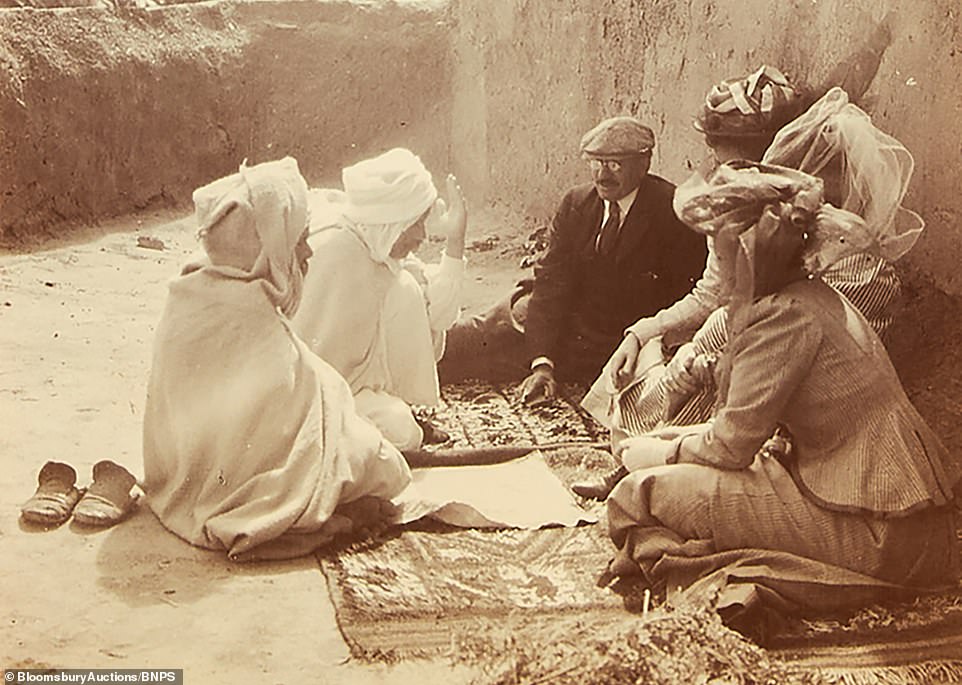 The Bowen father, mother and two daughters sit down to meet locals they labelled ‘Friends!’ in the album on the roof of a cafe 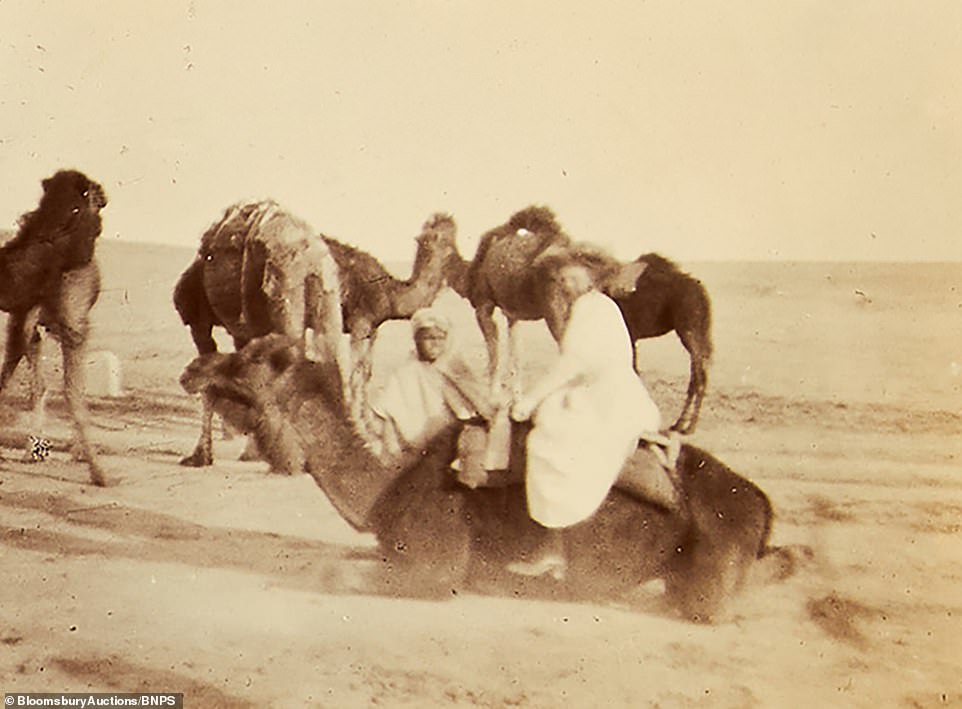 In a picture labelled ‘Descending!’ in the album, one of the Bowen women climbs off the top of a camel, still wearing a dress and hat, after their ride through the north African desert 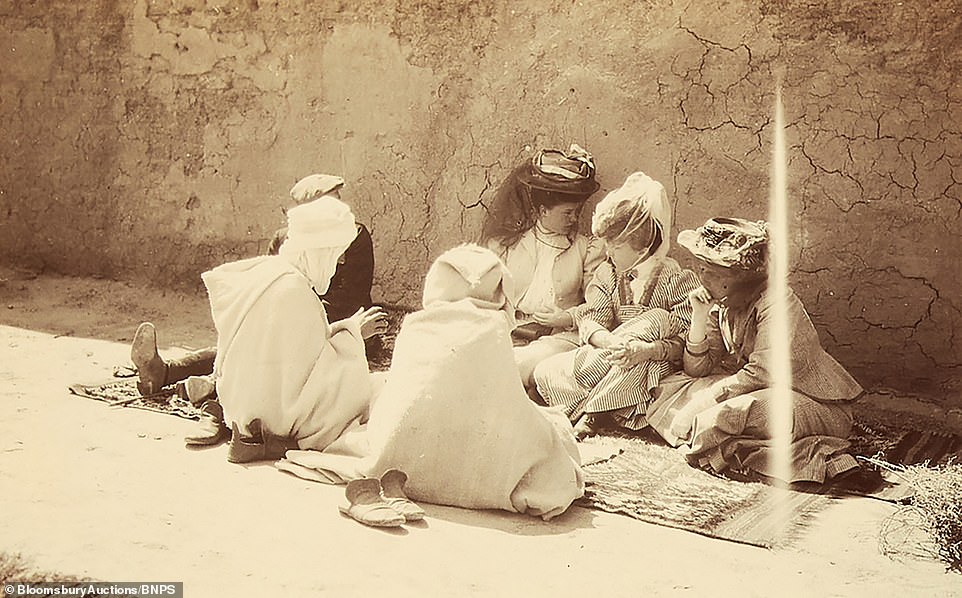 The Bowen daughters, mother and father talk to a local while sitting on the roof of a cafe on March 21 with the help of an interpreter (left front)

It runs to 100 pages and is almost five inches thick. The album documents everyday life in Morocco, Tunisia and Algeria that year.

They also capture buildings and monuments in places like Gibraltar, Algiers, Biskra and Constantine in Algeria, Carthage, El-Djem and Kairouan in Tunisia.

The album is coming up for auction from a deceased estate.

Roxana Kashani, head of Islamic and Middle Eastern world of paper at Bloomsbury Auctions, said: ‘It really is a vast, vast album. 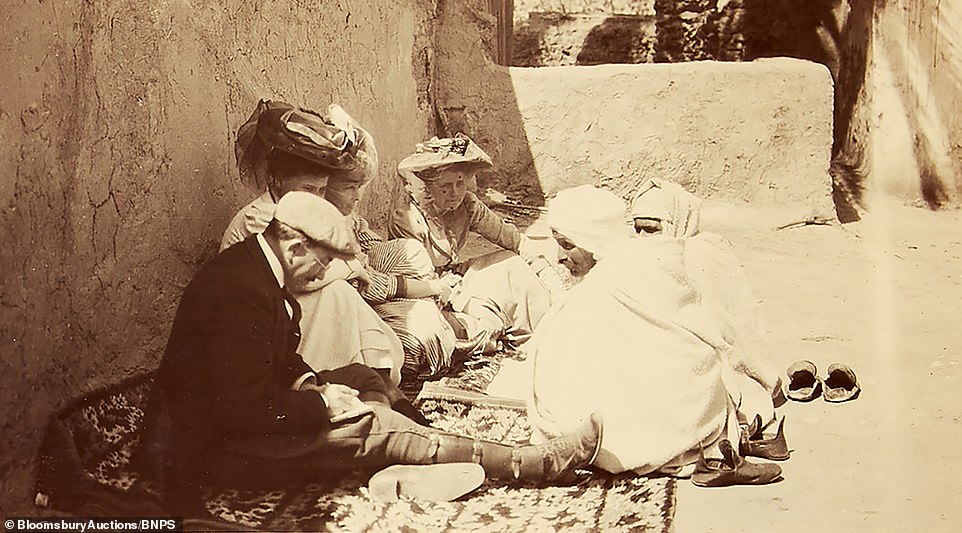 A page in the album titled Fortunes told in Sand show the family chatting with locals on the roof of an ‘Arab cafe’ on Saturday March 21, 1908 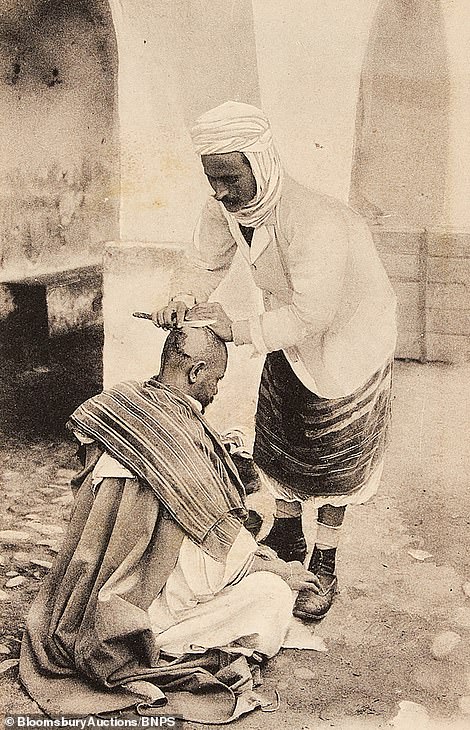 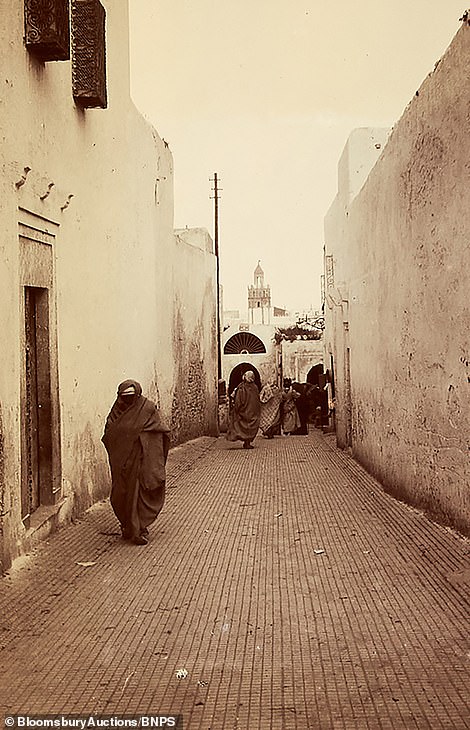 Left: A perruquier, or wig-maker, leans over to shave a man sitting on the ground’s head with a straight-edge blade outside in Biskra, Algeria. Right: Women wearing burqas walk through a narrow tiled street in one of the more urban areas the Bowen family visited 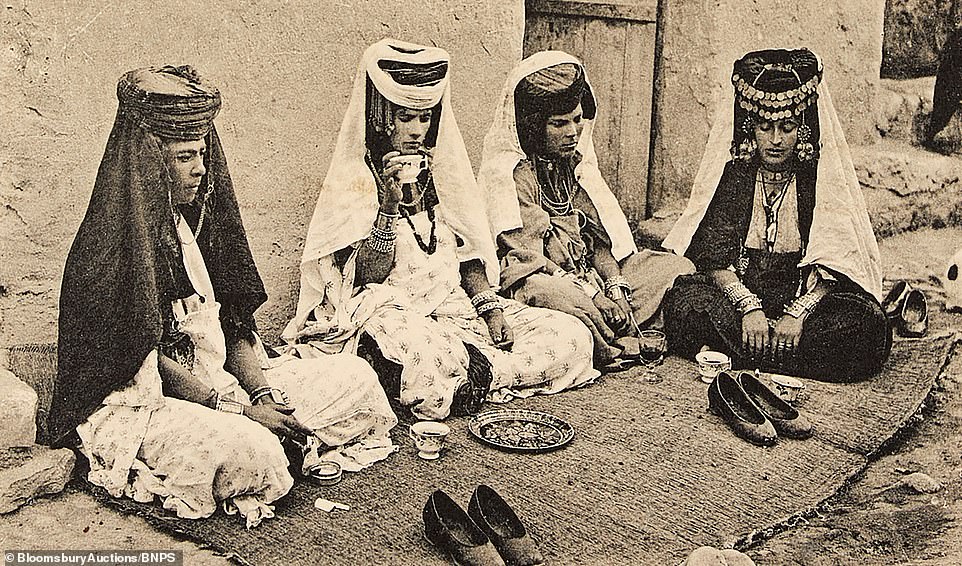 A picture labelled ‘Noon!’ shows four local women wearing decorative Ouled Naïl head pieces sit side-by-side, cross-legged on a mat in the street with their shoes off while drinking tea 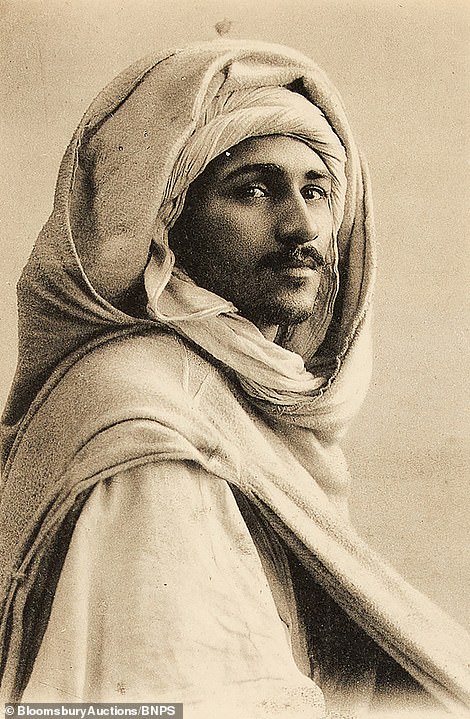 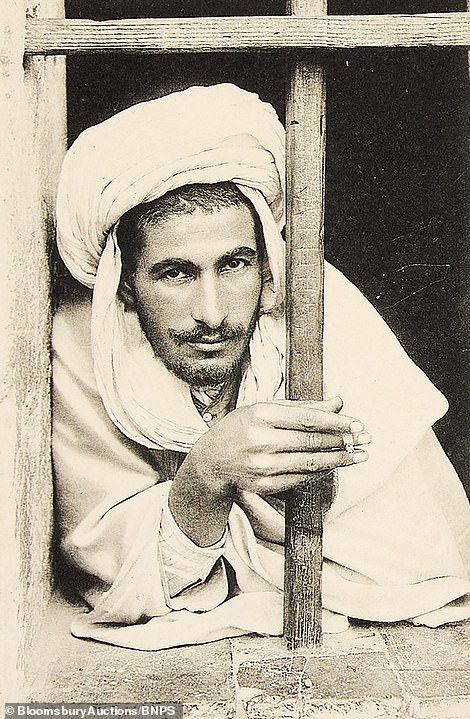 Left: A local man in Algeria with a moustache and turban poses for a postcard portrait titled Arabe de la Plaine, meaning plain Arab. Right: He smokes a cigarette while leaning out of his window

‘There are pictures of the Grand Hotel Continental in Algiers and views from their bedrooms. There are photos of buildings, statues, monuments of architectural and historical importance.

‘There are lots images of trades people like carpet makers as well as shepherds and Bedouins.

‘About three quarters of the album is made up of photographs while the rest is hand-coloured postcards that the family picked up along the way.

‘These postcards just don’t survive and so these provide a really useful insight into life in this part if the world in the early 20th century. 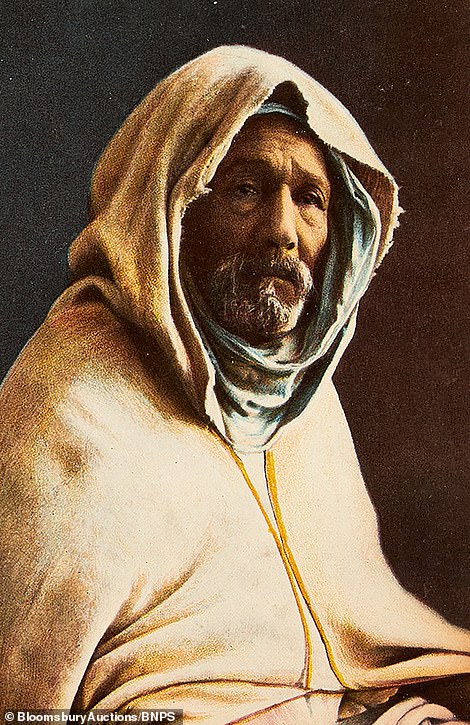 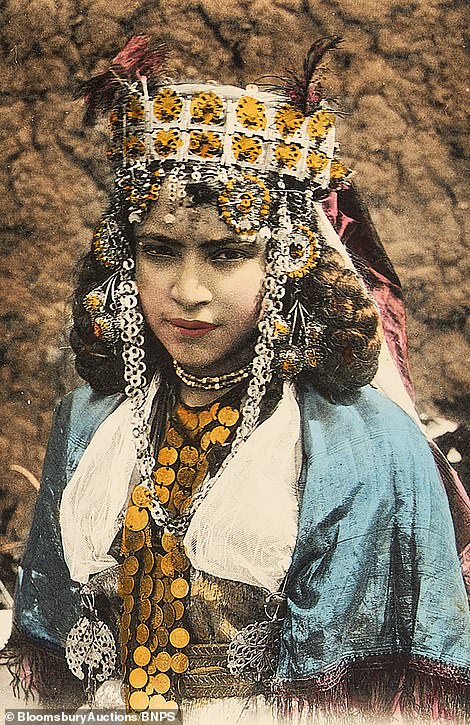 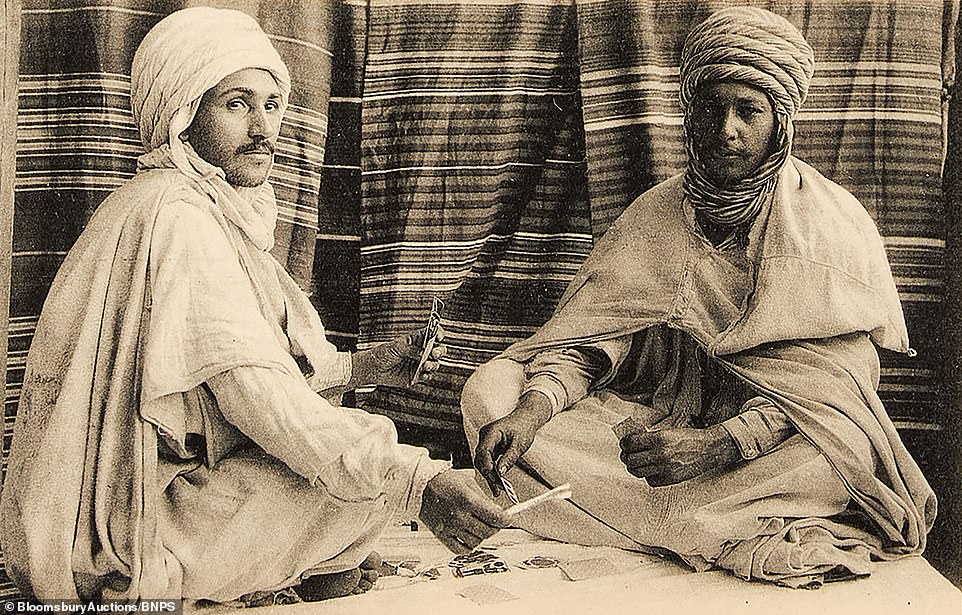 The album documents everyday life in Morocco, Tunisia and Algeria in 1908. Pictured: Two men wearing traditional turbans and robes sit cross-legged across from each other while playing cards on a postcard 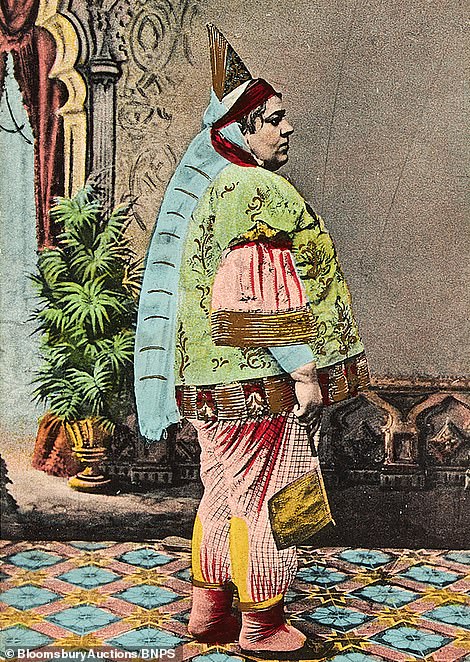 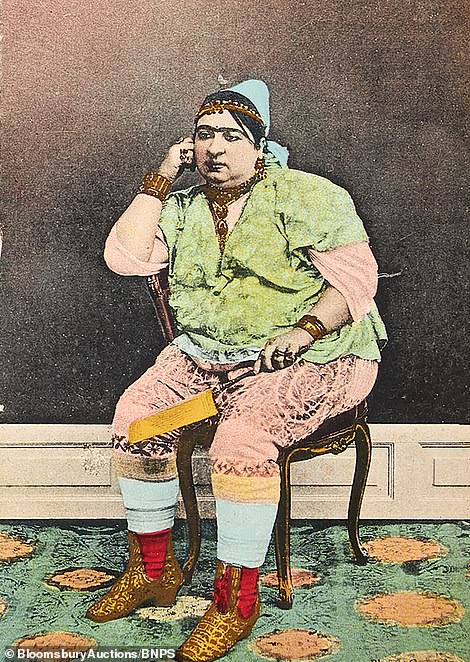 The album gives a fascinating insight into life in the Middle East in 1908. Pictured: Women in traditional dress are depicted on hand-coloured postcards picked up by the Bowen family on their travels 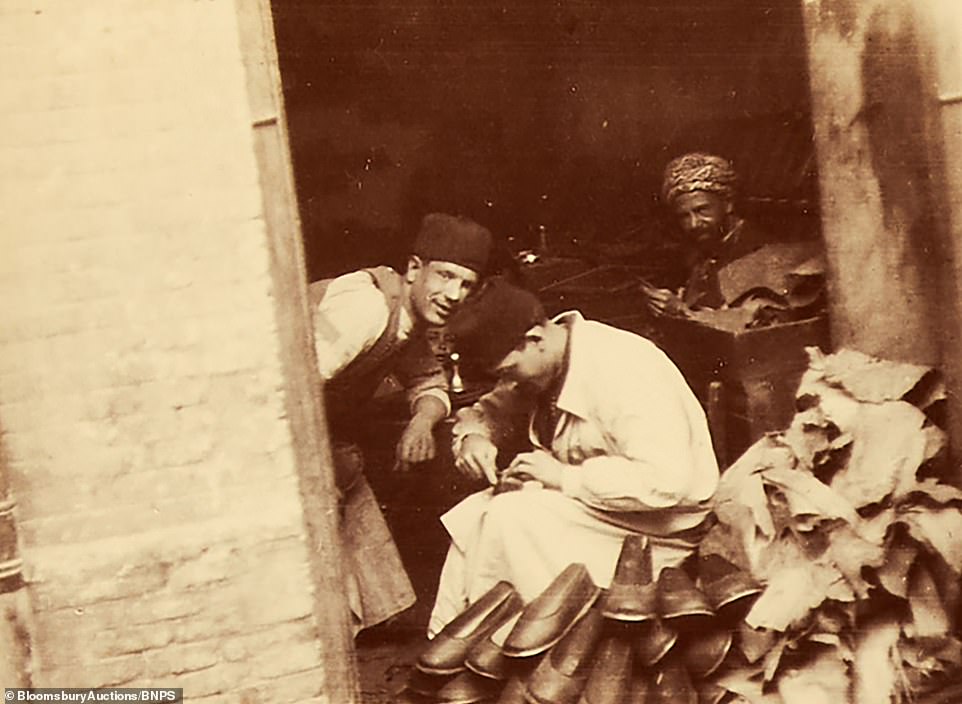 Men wearing Fezes make leather shoes in a street in Morroco. The album is being sold for an estimated £1,500 on October 30 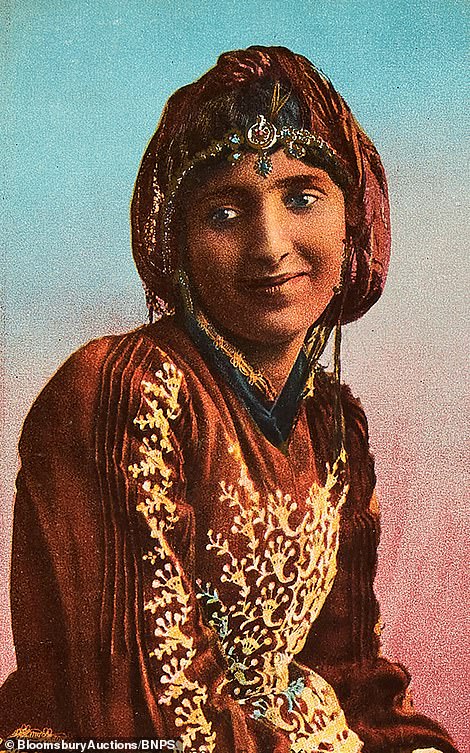 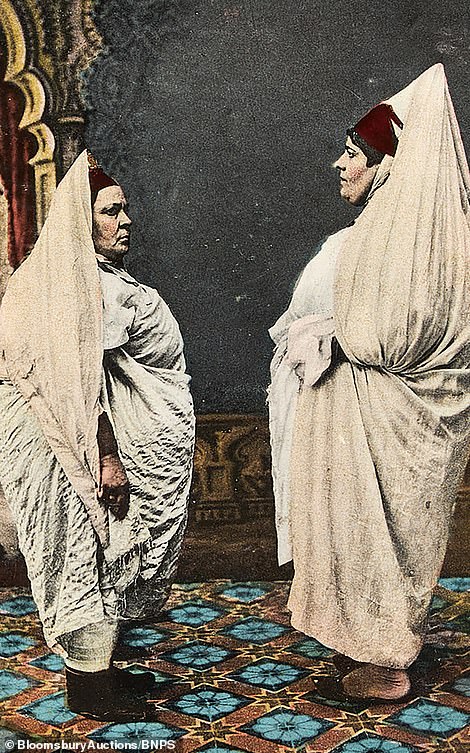 ‘The Bowens must have been a family of some wealth.

‘There are lots of photos of them doing touristy things like riding camels but also of them sat down meeting ‘friendly Arabs’ as they stated.

‘It is fascinating to see their journey documented on these photographs and postcards.

‘Printed ephemera from this part of the world from this time isn’t particularly common.’

The album measures 15ins by 11ins and some of the pages inside are a little faded. It is being sold for an estimated £1,500 on October 30. 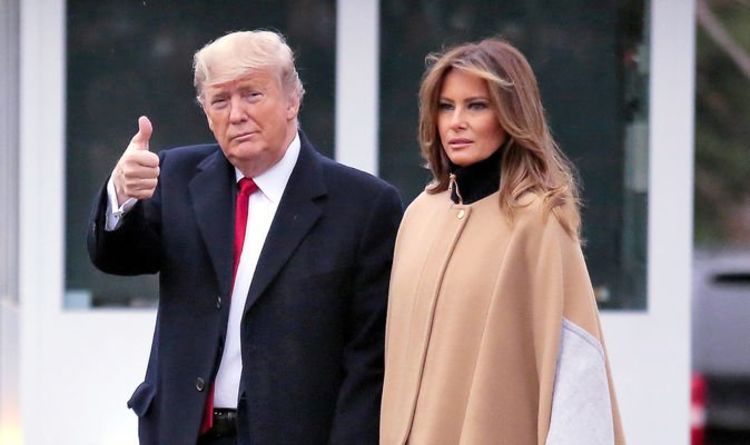 The US President is set to be acquitted on all charges on Wednesday, the day after he delivers a State of the […] 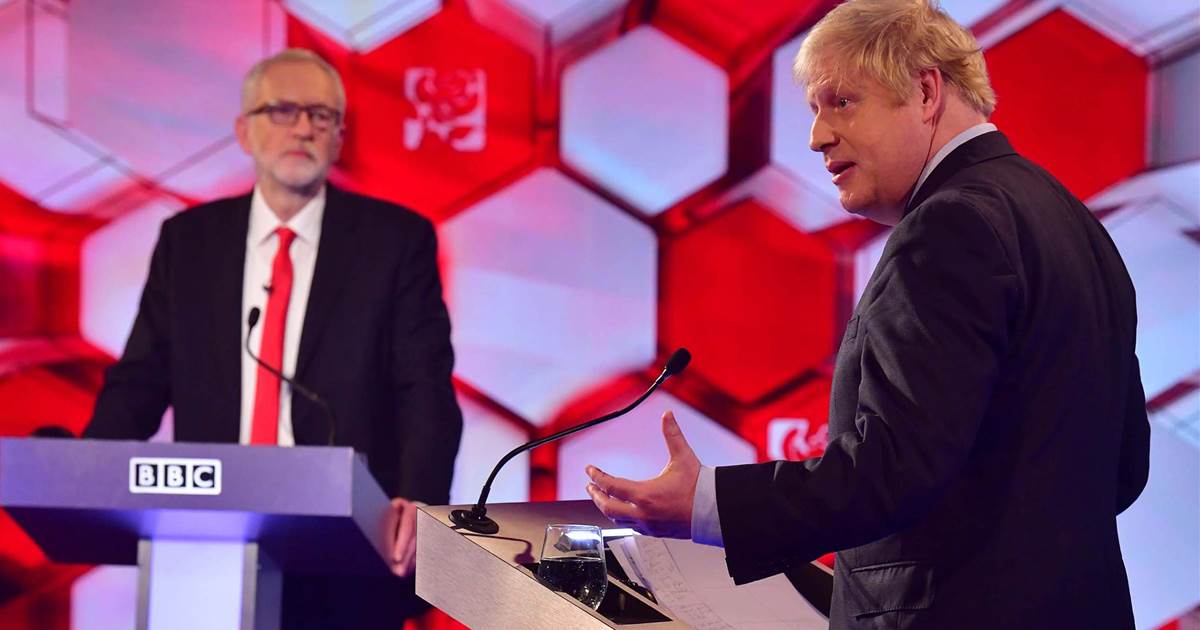 LONDON — The final hours of campaigning have begun ahead of Thursday’s election, which is being called the most fractious vote in […] 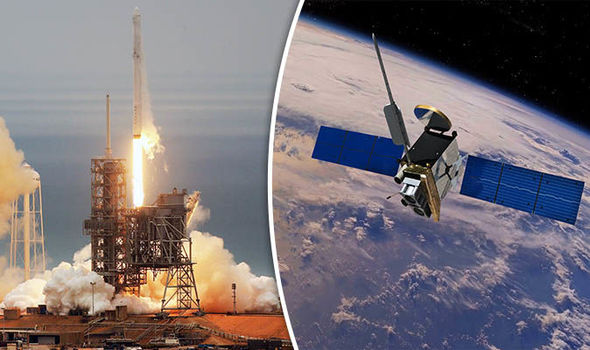 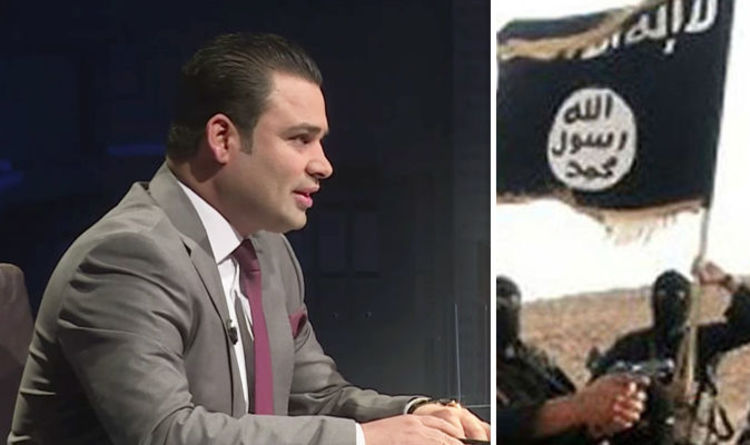 The show broadcasts statements from the sadistic supporters and depicts horrifying images of their crimes. Ahmed Hassan, the presenter of the show, […]