Hello! I’m the one half of Simogo that is not Gordon. We’re mostly known for making small, boutique-y games, often story and interface-driven. We try to do things others aren’t and surprise both ourselves and what audience there might be for those things.

So, after making three slow and thinky games (Year Walk! Device 6! The Sailor’s Dream!), we wanted to make something that was a little more gut than brain. That turned out to be Sayonara Wild Hearts, which is coming to PlayStation 4 on 19th September. 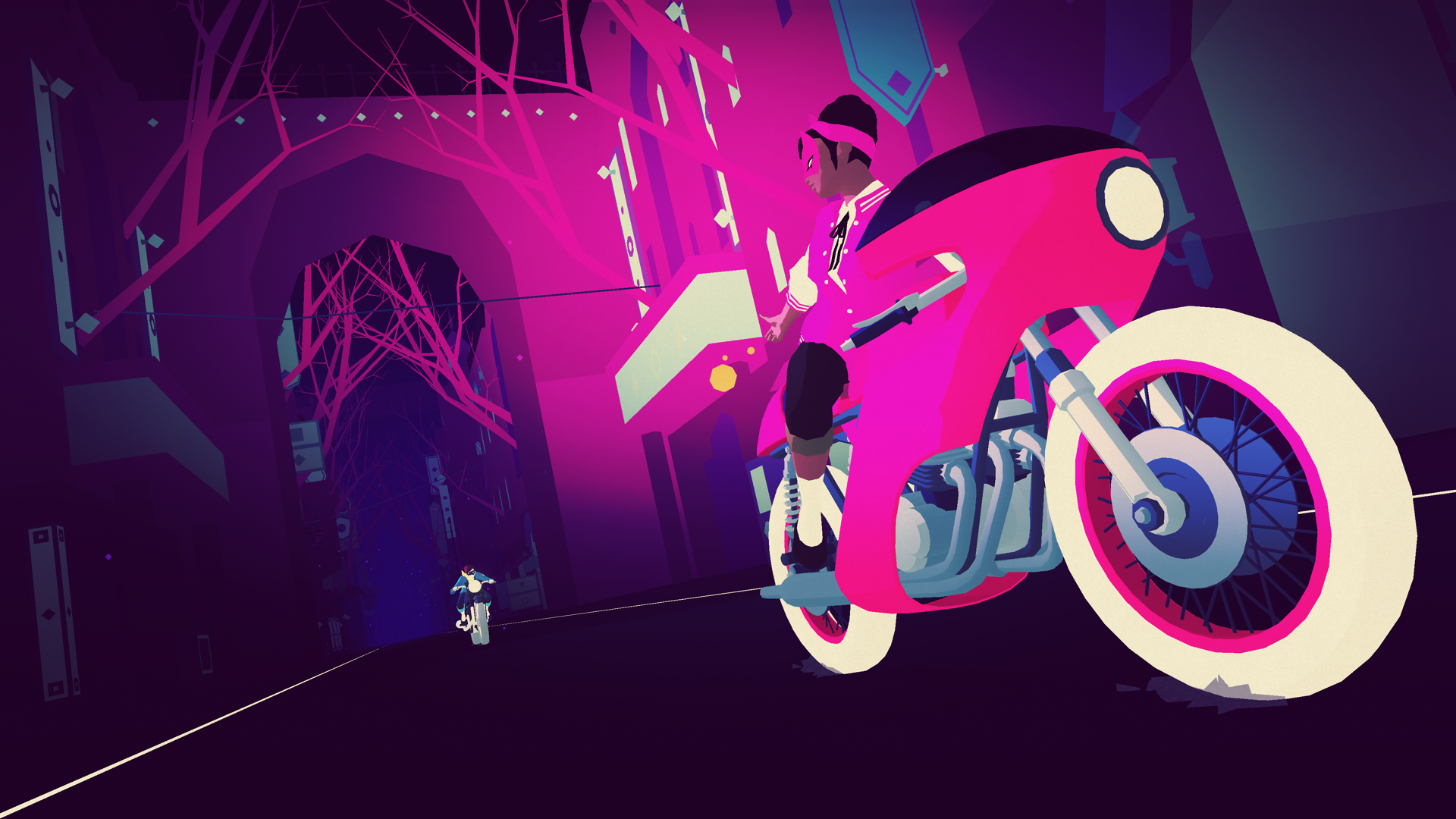 When we started, we only had a doodle in the corner of a notebook of lady wearing a mask. 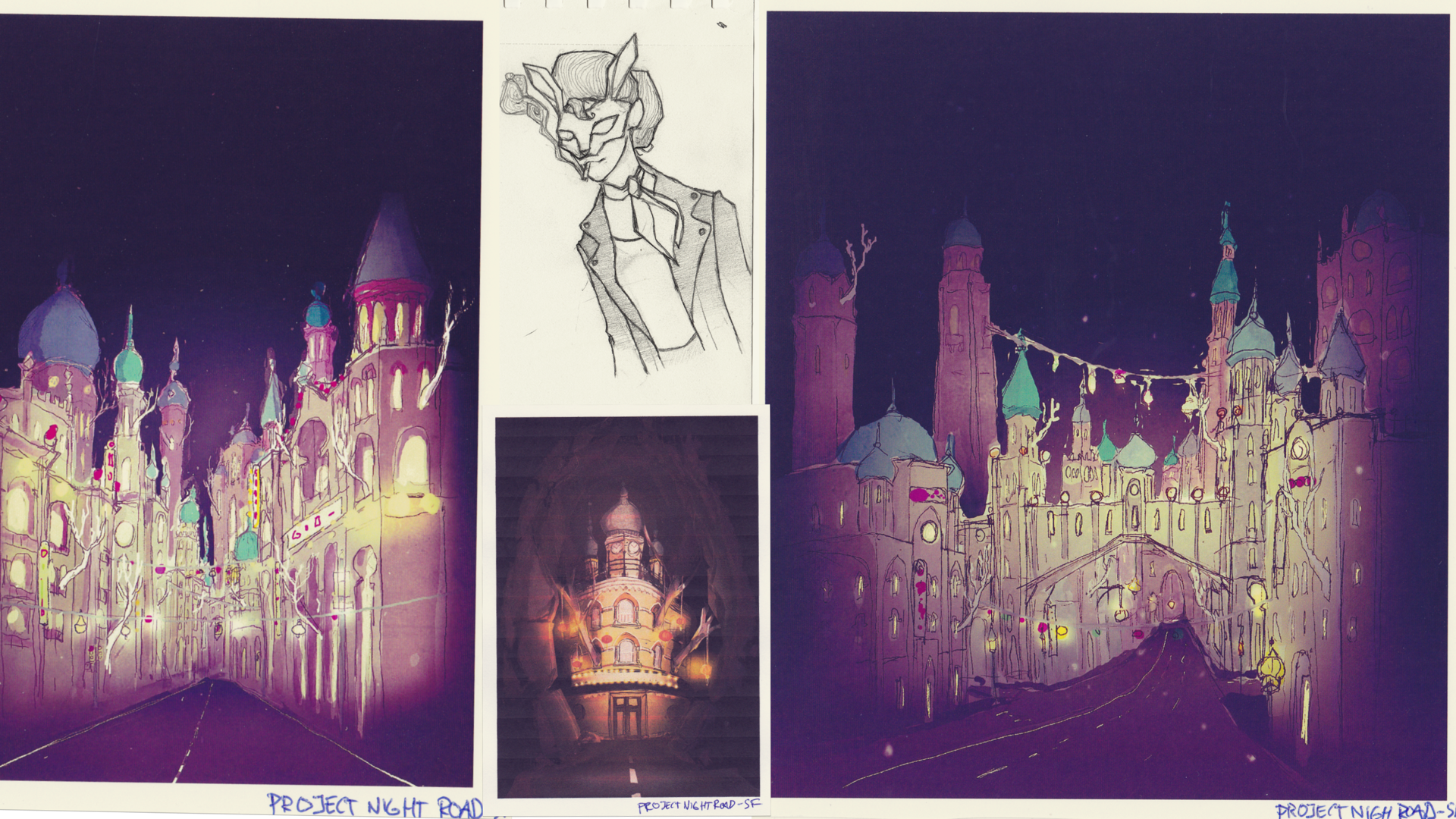 Some early doodles before we knew what we were actually making.

We thought that we would be making some dark surreal thing about tarots, masks, travelling on a motorcycle through dreamscapes and endless darkness, to some fusion of surf rock and taiko drums.

We asked our friend Carl if he wanted to create and animate some cool biker ladies and soon we made a prototype, which was cool and all. 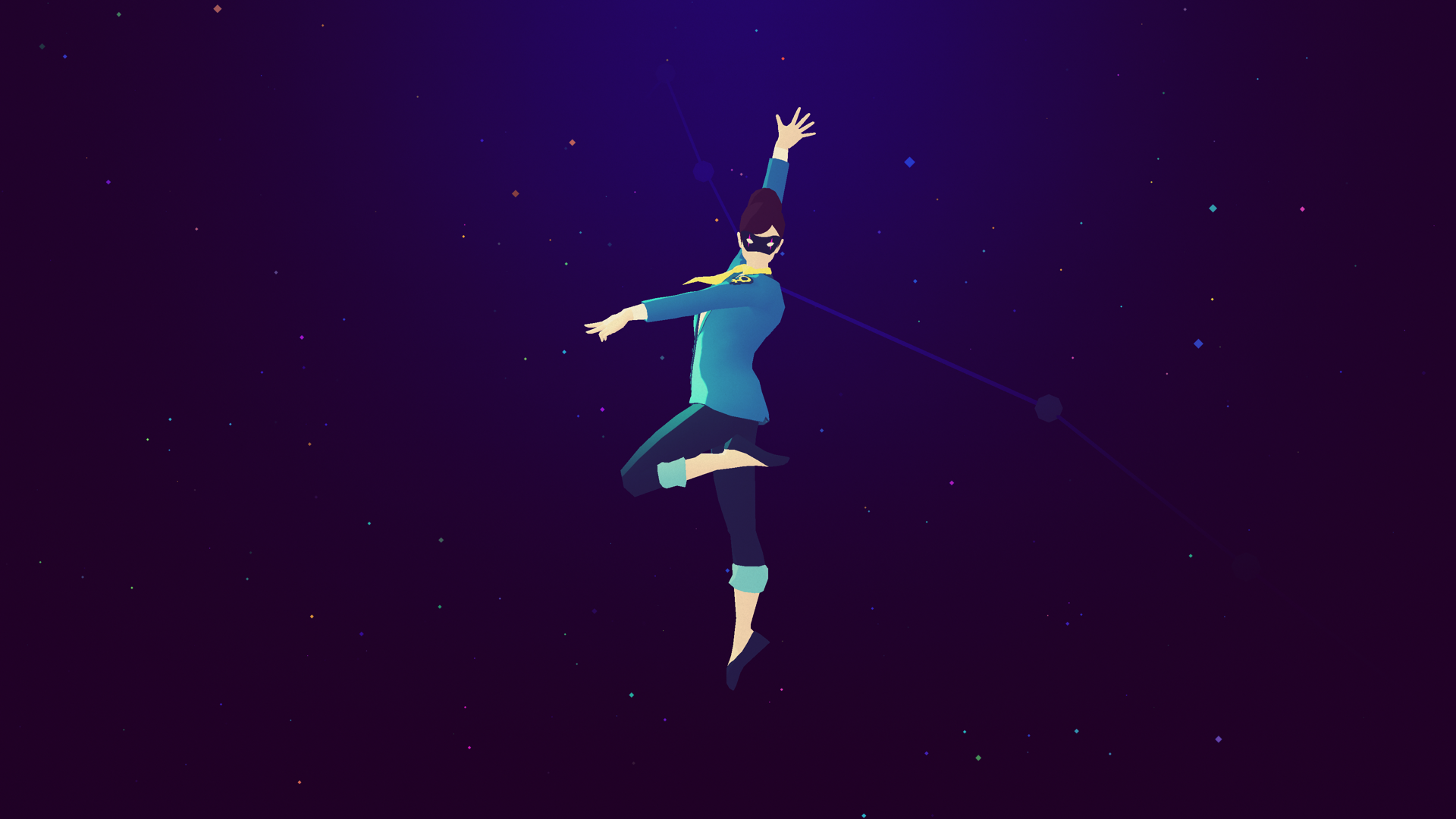 The Fool – the protagonist of Sayonara Wild Hearts.

But as we played it one day we had a playlist of really energetic pop songs on, and just then and there we immediately said “No! This is it,” and steered in a new direction.

The game we were making simply had to have a pop soundtrack and it needed vibrant colours and energy to match it. Soon enough Jonathan and Daniel were producing a pop album and through some star alignment and an encounter at a record shop here in Malmö a year earlier, Linnea was recording vocals for them not long thereafter. 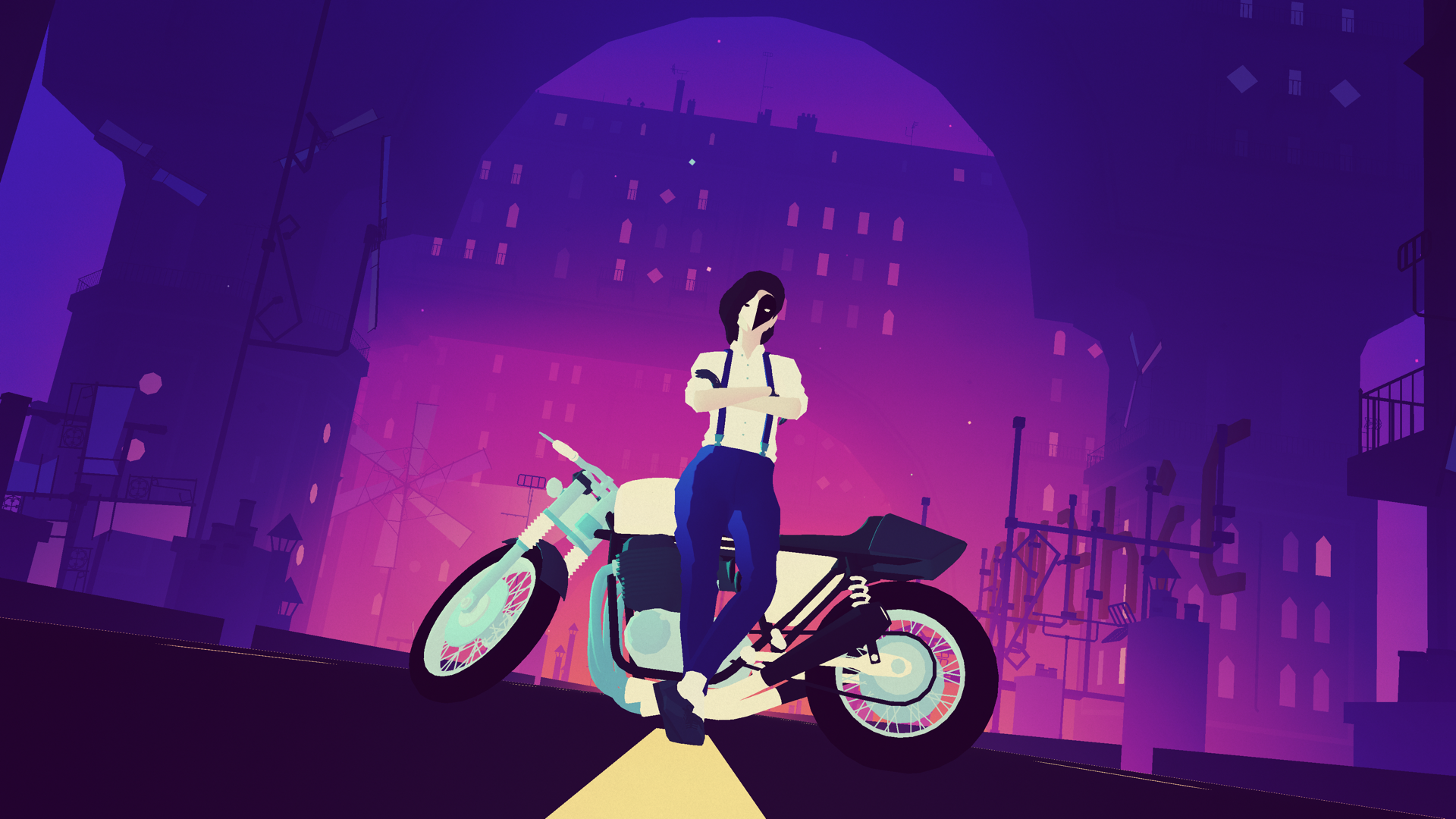 All opponents are based on Major Arcana tarots – as are many vehicles, other objects you’ll encounter in the game.

Around this time we had also been thinking about how uninviting games have become. We thought about how it’s always dudes saving the world, convoluted systems and too many buttons to keep in mind.

We wanted to make a game that would be as inviting to people who typically don’t play as it would be to people like ourselves who miss old arcade games, and still capture the thrill of a good action game. We also came to the conclusion that to make this game as inclusive as possible, it would have to be as enjoyable to watch and listen to as it was to play. A scene from the first stage in which a diamond butterfly appears in a young woman’s dream and leads her through a highway in the sky.

We met with the lovely people of Annapurna Interactive, they dug what we were doing and we dug what they were doing, and their support allowed us to expand the team even more with two programmers and a UI artist (Björn! Jensen! Åsa!). The gameplay varies a between stages. This is from an early dance inspired battle stage.

All of these ideas, concepts and people came together and created Sayonara Wild Hearts. Let’s Pop! 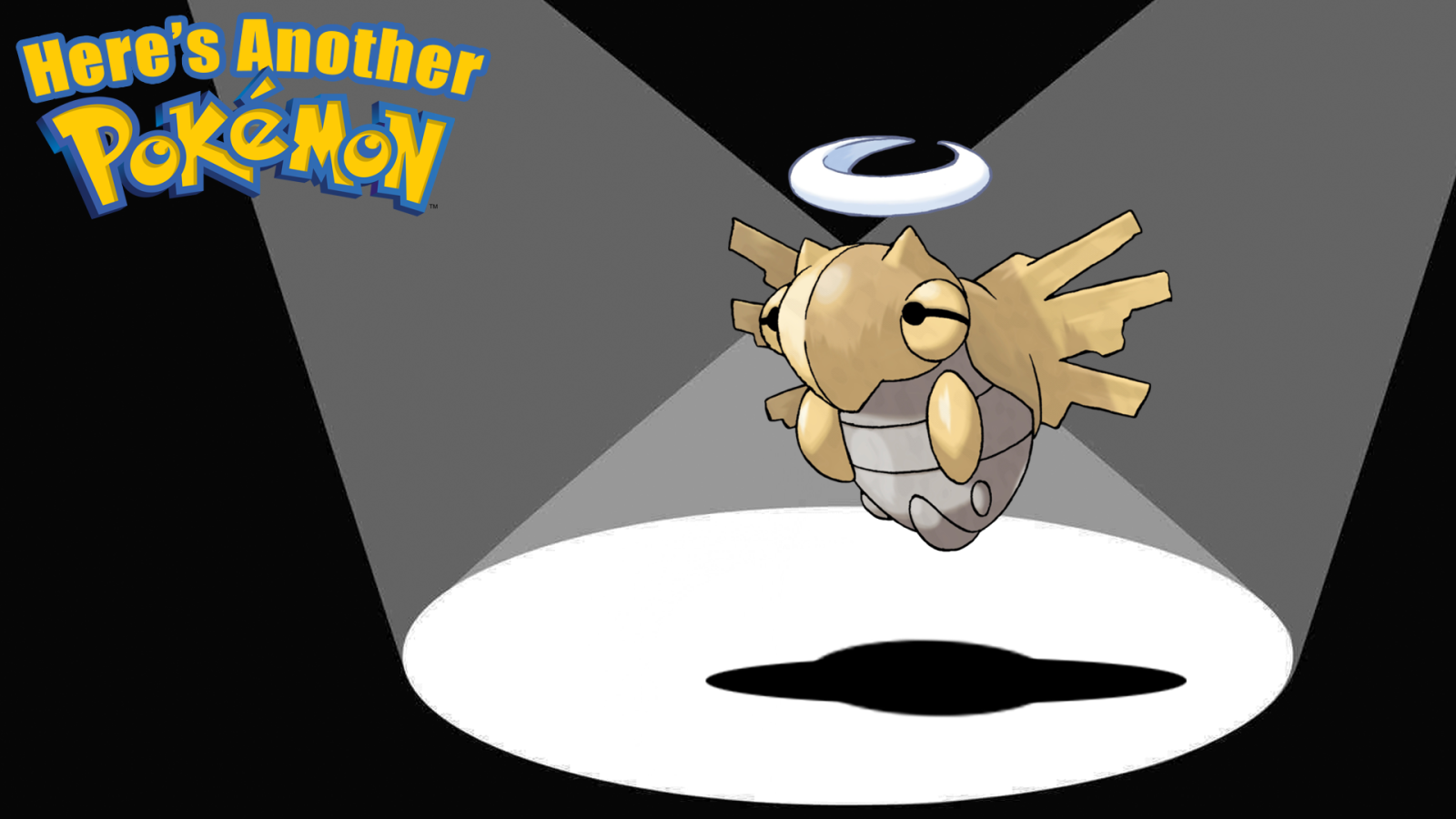 Changes are afoot in CS:GO – not only does it now have characters, but it’s getting a little bit of Halo thrown into […]