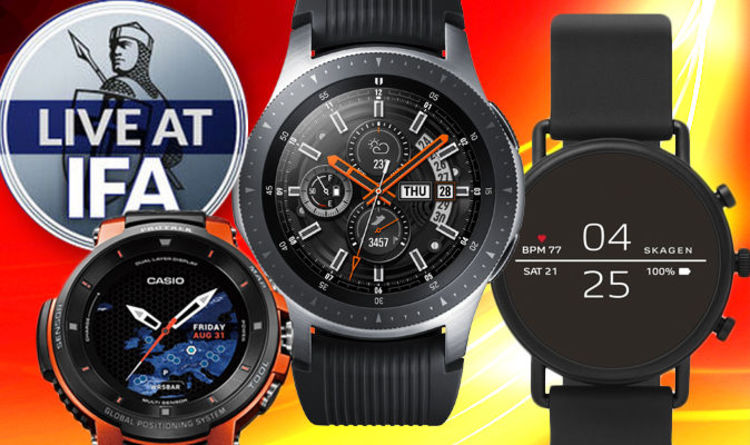 Galaxy Watch was announced alongside the Galaxy Note 9 at Samsung’s Unpacked event in New York City at the start of the month.

The wearable touts a brand new design and comes in 42 and 46millimetre case sizes.

One of the smartwatch’s most notable editions comes in the form of built-in network support, meaning Samsung fans will be able to make calls on their wrist without the need for a phone.

But the wearable also brings a host of new features focusing on health and fitness; Galaxy Watch will automatically track workouts and can monitor 40 exercises.

The hardware will arrive in the UK on September 6 and will start at £279 for the 42millimetre are option but will rise to £299 for the larger variety.

But at IFA 2018 a score of new wearables were announced that launch a direct challenge to Samsung’s smartwatch.

Casio debuted the WSD-F30 smartwatch at the German tech show that is built to be rugged and used for outdoor activities.

The watch can be dunked in up to 50 meters of water, runs Google’s Wear OS software and gives users a variety of settings to choose from in order to maximise battery life.

While the wearable should be able to last around 3 days of normal usage thanks to a new “extend mode”, Casio claims it can last up to an entire month if users opt for “monochrome mode”.

The former turns off Bluetooth and Wi-Fi functionality but still allows GPS usage.

Meanwhile, monochrome mode severely limits colours on the screen and only shows the time in addition to measurements the device is capable of tracking such as levels of altitude.

The WSD-F30 will be available towards the end of January 2019 – no pricing has yet been discussed.

Diesel also announced a new smartwatch at the European tech conference that touts a colossal case size of 56millimetres.

The wearable comes with a 1.39-inch screen and Diesel claims the product is capable of lasting up to two days on a single charge.

No price has yet been announced for the hardware although it is expected to go on sale in October.

Skagen have also announced a new smartwatch dubbed the Falster 2 that boasts a stylish design, comes packing a heart rate sensor and is swim-proof.

The Falster 2 is a minimalist wearable running on Google’s Wear OS software – the hardware packs in NFC so users can make payments with the flick of their wrist.

Skagen’s latest smartwatch will start shipping on September 12 and will be priced at £269.

‘There’s No There There’: What the TikTok Deal Achieved

Emmys 2020 predictions: Who will the winners be?

Creative Emmys 2020 winners: The Mandalorian and Watchmen score most awards

Best smart thermostats to buy in 2020