The sound of shouts and the smashing of glass pierced the night air in the southern Chinese city of Guangzhou, as the defiant and frustrated protesters clashed with riot police.

In dystopian scenes, scores of riot police – covered head to toe in white hazmat suits – stood shoulder-to-shoulder as they advanced down a street towards a group of protesters.

Angry protesters threw anything they could find – including glass bottles – at the police officers, who cowered under their riot shields. The violent clashes prompted a fierce rebuke, with officers dragging screaming protesters away to unknown locations. 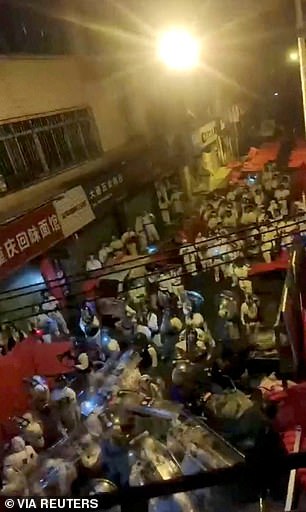 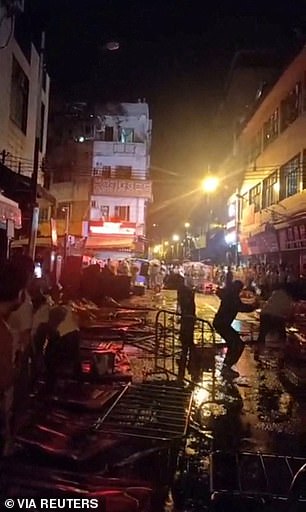 Protesters have clashed with riot police wearing white hazmat suits in China, with demonstrators throwing glass bottles at the officials in chaotic and violent scenes 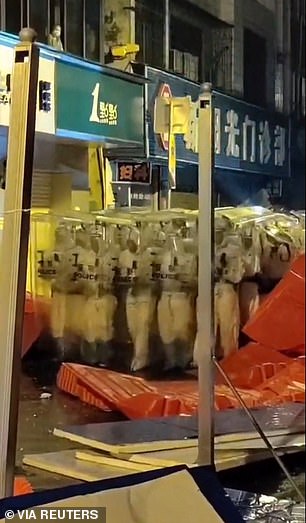 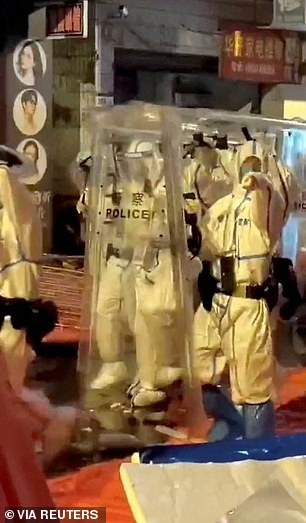 Video shows scores of riot police in all-white pandemic gear, standing shoulder-to-shoulder, cowering under their see-through shields as glass smashed around them in the southern Chinese city of Guangzhou 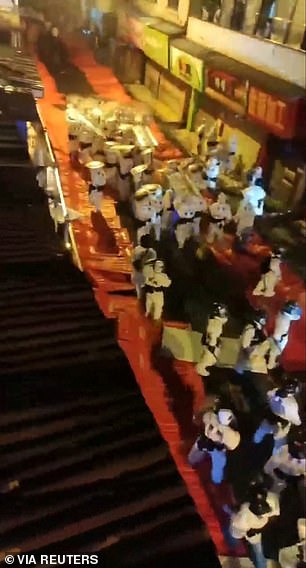 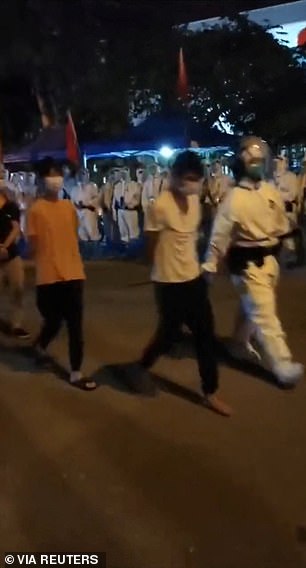 Earlier on Tuesday night, locals shopping in a market watched on as a steady stream of riot police officers marched in formation through the streets of Guangzhou.

The arrival of hundreds of riot police escalated tensions in the city and video shows demonstrators throwing glass bottles at the officials in chaotic and violent scenes.

The riot police were seen tightly bunched together, with rows of officers protecting themselves from the incoming onslaught of glass with their see-through shields.

In the video, people should be screaming and shouting in frustration at the brutal crackdown against protesters who are demonstrating against Xi’s zero-Covid policy which has seen millions placed under strict lockdowns for months.

The riot police ruthlessly threw a tear gas cannister towards the demonstrators in a narrow street, prompting panic among the protesters who tried to run away from the fumes.

Nearly a dozen protesters, their hands bound with cable ties, were seen being dragged away by the police officers to an unknown location.

The violent scenes – which are rare in China’s authoritarian state – comes as Beijing’s top security body warned last night that the police would ‘crack down’ on the protests.

The demonstrations are the most widespread since the Tiananmen Square massacre in 1989, where hundreds – if not thousands – of Chinese protesters were killed by soldiers in tanks.

The protests erupted over the weekend across major cities, including Beijing and Shanghai, with China’s vast security apparatus moving swiftly to smother any further unrest. 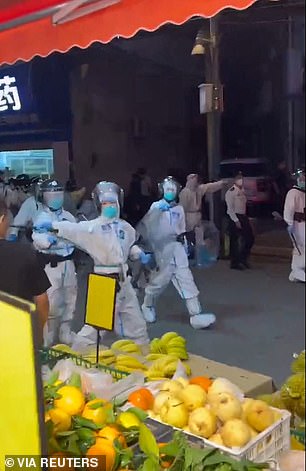 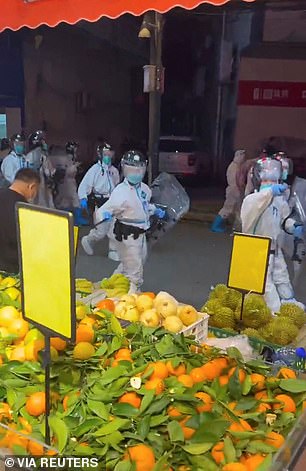 Riot police in personal protection suits (PPE) walk down a street, during protests over coronavirus disease restrictions, in Guangzhou on Tuesday night 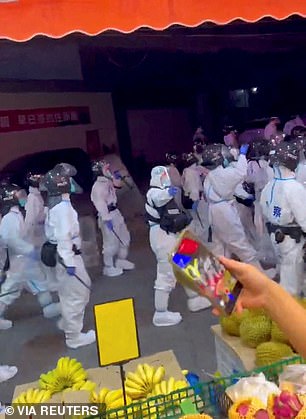 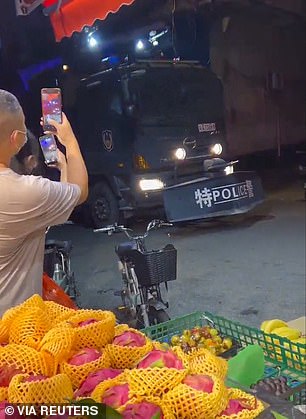 Riot police in personal protection suits (PPE) walk down a street, during protests over coronavirus disease restrictions, in Guangzhou on Tuesday night. A riot police vehicle was also seen

A Guangzhou resident surnamed Chen said on Wednesday that he witnessed around 100 police officers converge on Houjiao village in Haizhu district and arrest at least three men on Tuesday night.

Anger over China’s zero-Covid policies – which involves lockdowns of huge numbers of people and has strangled the economy – has been the trigger for the protests.

A deadly fire last week in Urumqi, the capital of the northwestern region of Xinjiang, was the catalyst for the outrage, with people blaming Covid curbs for trapping victims inside the burning building.

But demonstrators have also demanded much wider political reforms in communist China, with some even calling for President Xi Jinping to stand down.

Signalling its zero-tolerance approach to the protests, China’s top security body called for a ‘crackdown’ on what it described as ‘hostile forces’.

The body – which oversees all domestic law enforcement in China – also agreed at its meeting that it was time to ‘crack down on illegal criminal acts that disrupt social order’ as well as ‘safeguard overall social stability’.

The warning came after a heavy police presence across Beijing and Shanghai on Tuesday appeared to have quelled protests in those cities.

Authorities have sought to intimidate protesters by going to their houses and taking them to police stations. 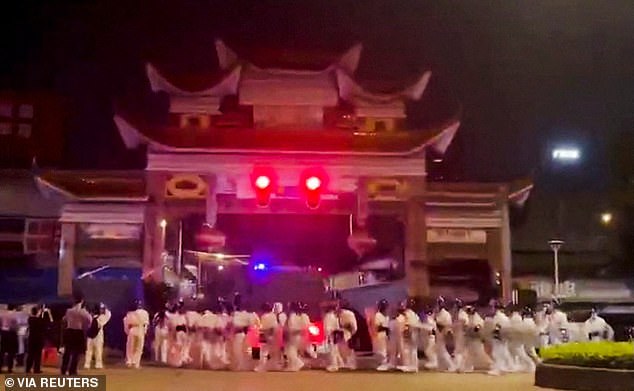 ‘Police came to my front door to ask me about it all and get me to complete a written record,’ a Beijing resident who declined to be identified told Reuters on Wednesday.

Another resident said some friends who posted videos of protests on social media were taken to a police station and asked to sign a promise they ‘would not do that again’.

On Wednesday, several police cars and security personnel were posted at an eastern Beijing bridge where a protest took place three days earlier.

Some rallies did go ahead elsewhere on Monday and Tuesday, however.

At Hong Kong’s oldest university, over a dozen people led the crowd Tuesday in chanting slogans such as ‘give me liberty or give me death’.

‘We are not foreign forces, we are Chinese citizens. China should have different voices,’ one woman shouted, while another held a placard mourning victims of the Urumqi fire. 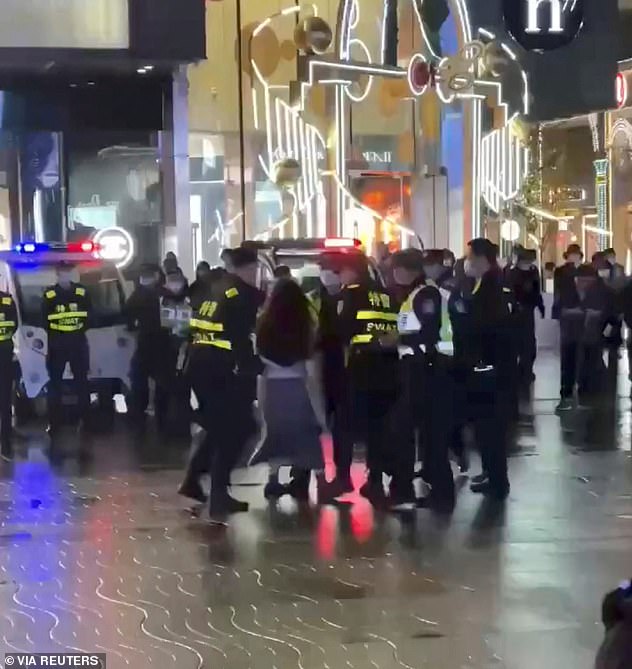 Dramatic video shows a woman screaming as she is arrested by six police officers and dragged away from a main square in Hangzhou, as Chinese officials sought to crack down on protesters in the city

In Hangzhou, just over 170 kilometres (105 miles) southwest of Shanghai, there was heavy security and sporadic protests in the city’s downtown on Monday night.

China’s strict control of information and continued travel curbs have made verifying protester numbers across the vast country very challenging.

But the widespread rallies seen over the weekend are exceptionally rare in China and it comes as China’s economy sputters after growing at breakneck rates for decades.

That era of prosperity was fundamental for the social contract between the Communist Party and a population whose freedoms have been dramatically curtailed since President Xi Jinping took power 10 years ago.

The latest unrest has drawn global attention, with solidarity protests springing up from Melbourne to Washington.

In China, Covid has spread despite Beijing largely isolating itself from the world and demanding significant sacrifices from hundreds of millions to comply with relentless testing and prolonged isolation, three years into the pandemic. 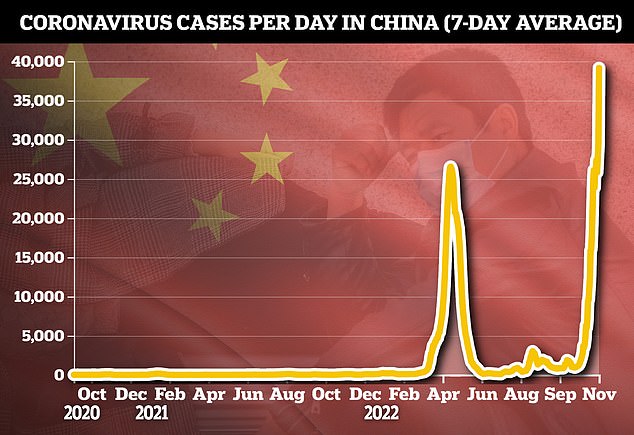 In China, Covid has spread despite Beijing largely isolating itself from the world and demanding significant sacrifices from hundreds of millions to comply with relentless testing and prolonged isolation, three years into the pandemic. Pictured: Covid cases in China have now surpassed the peak of April this year

China’s National Health Commission (NHC) announced on Tuesday a renewed effort to expand low vaccination rates among the elderly – long seen as a key obstacle to relaxing the measures.

Many fear that opening the country up while swaths of the population remain not fully immunised could overwhelm China’s healthcare system and cause more than a million deaths.

China logged 37,612 domestic cases Wednesday, down from record highs over the weekend and comparatively tiny compared to caseloads in the West at the height of the pandemic.

Chinese stocks were steady, with markets weighing endemic economic weakness against hopes that the public pressure could push China to eventually reopen. 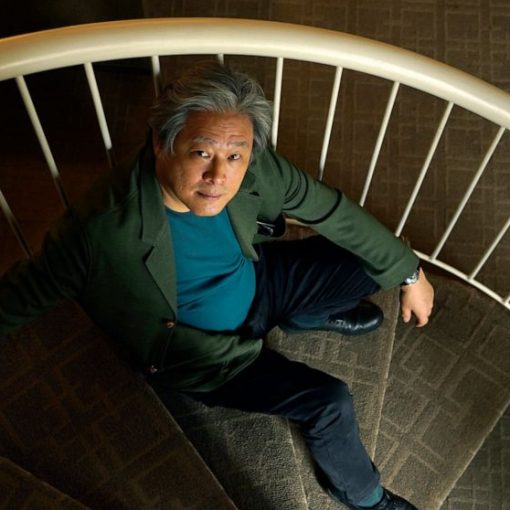 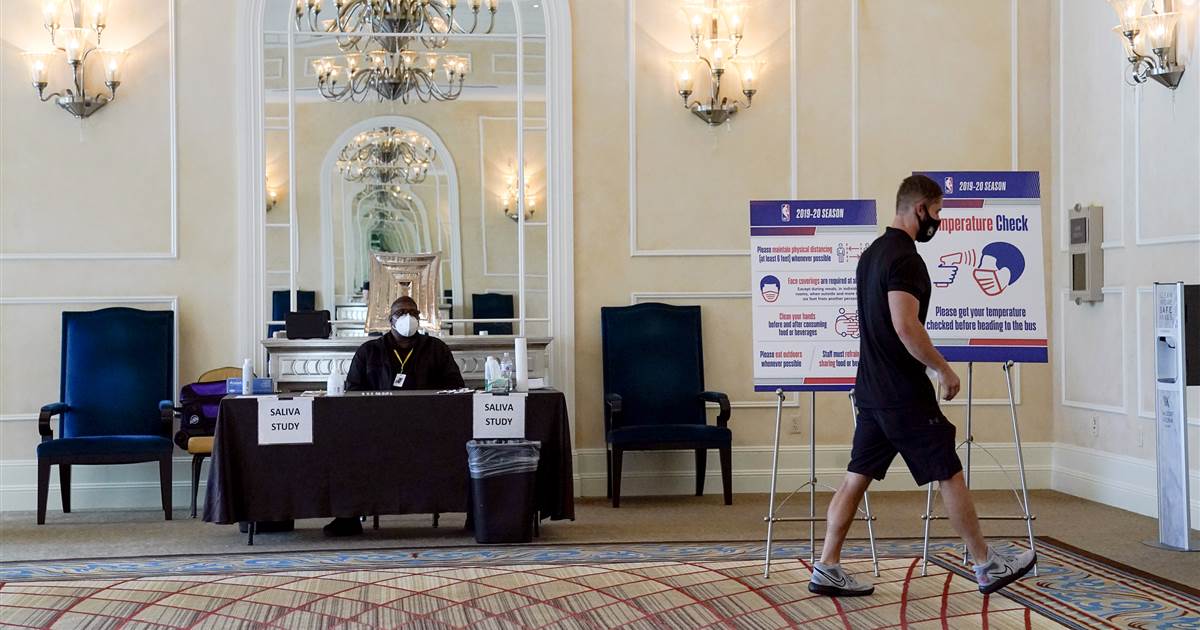 A newly authorized saliva-based coronavirus test is a step in the right direction, but won’t do much to ease the strain on […] 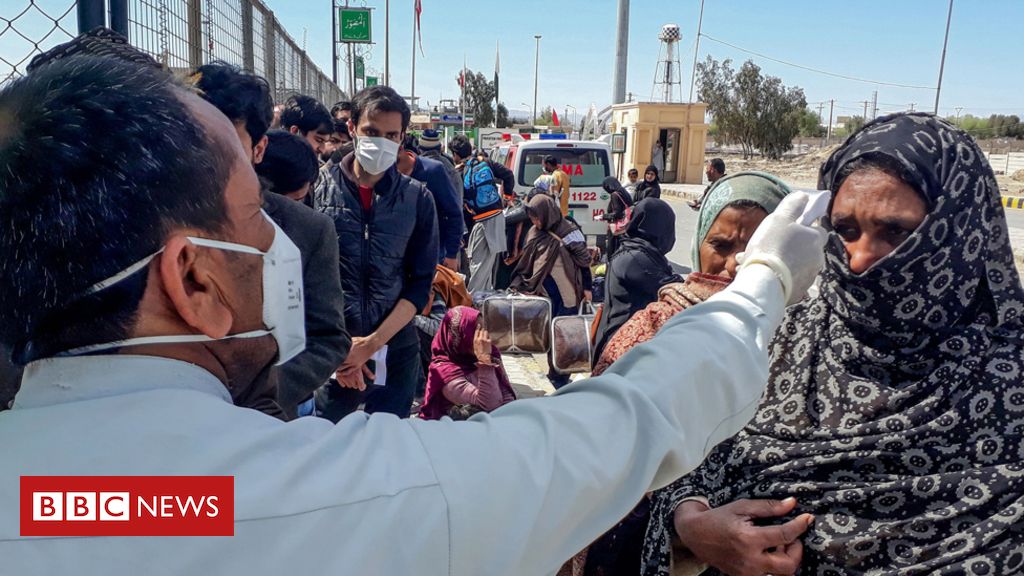 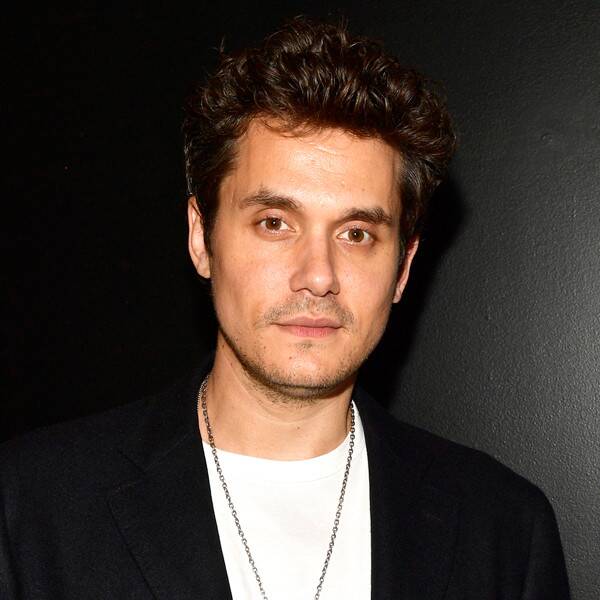