New York is joining California in banning the sale of new gas vehicles by 2035, but how it plans to charge thousands of electric vehicles in a city that lacks private driveways and convince people to pay at least $20,000 more for a new plug-in still remains a mystery.

There are just 677 charging stations spread across the five boroughs and although the city is set to add 10,000 curbside chargers by 2030, it may not be enough to power the thousands that will be cruising around by 2030 – 68 percent of all new cars sold this year be electric.

Along with where people will charge their cars, comes the question of how they will afford one. Nearly 50 percent of residents are deemed middle class and 17.9 percent are low income, leaving just 35 percent of people who have a disposable income to spend thousands of dollars more on a new plug-in vehicle.

New York, however, offers electric car buyers the Drive Clean Rebate of up to $2,000 for new car purchases or leases, but this still may not be enough to tempt consumers into swapping out a cheaper gas guzzler for a more expensive vehicle. 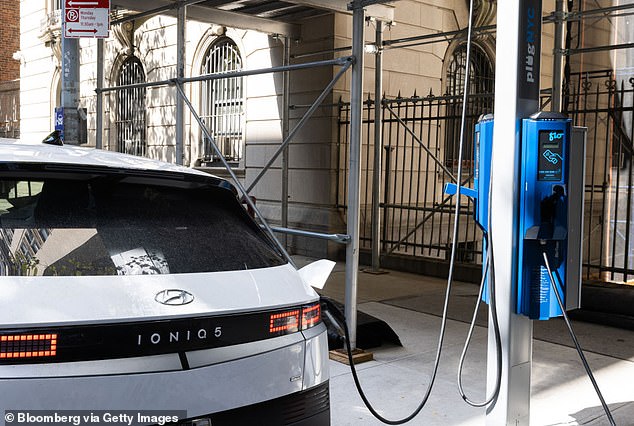 New York is banning the sale of new gas cars by 2035, but officials have yet to reveal how they will provide charging to tens of thousands of new electric vehicles in New York City

The state’s governor, Kathy Hochul, made the announcement on Thursday, ordering automakers to start phasing out gas-powered vehicles to hit specific quotas.

The ban, which will go into effect by the end of the year, follows California’s plan by setting quotas to reach the goal: 35 percent of new vehicle sales to be zero-emission vehicles in 2026, 68 percent by 2030 and 100 percent by 2035.

Hochul announced the initiative last year, but had to wait for California to make the first move due to federal regulations.

And the move is New York’s big push into cutting 85 percent of its greenhouse gasses by 2050.

The 10,000 additional curbside charging stations are the only ones that have been revealed, which would bring the total to just 10,320 five years before the ban is in effect. 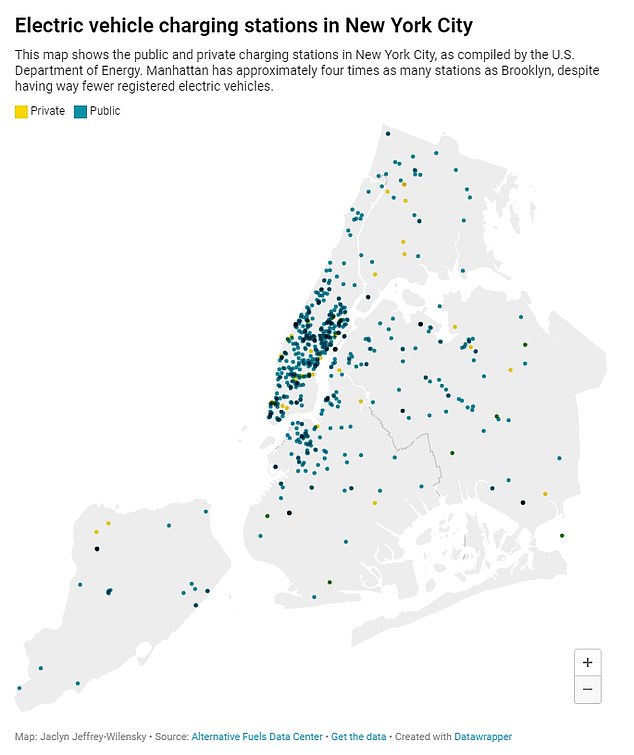 Most of the operating charging stations are found in Manhattan, but this region also has the least amount of electric vehicles.

Brooklyn has 10,414 registered vehicles and 241 stations, while Manhattan has 3,900 electric vehicles that have access to 320 charging stations.

Queens has the same number of zero-emission cars as Manhattan, but only provides 43 public charging stations.

And Staten Island has 32 stations for its 1,276 electric vehicles.

State officials could just construct tens of thousands of more chargers, but Kenneth Gillingham, economics professor at Yale School for the Environment, told Gothamist: ‘You don’t want to put in the chargers before people are going to be using them.

‘People don’t want to buy electric vehicles until the chargers are in.’

California is also facing such obstacles, but it has the land and private driveways to build off from.

The west coast state made its ban official in August, but it currently does not have enough charging stations to meet the soon-be demand. 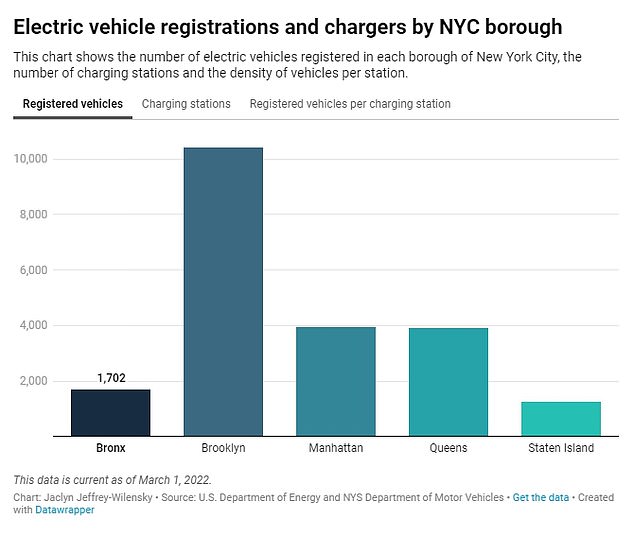 Then there is the cost of purchasing a new electric vehicle, which is now averaging about $66,000 – a 13 percent year-over-year increase – compared to the $43,000 for the average gas-powered car.

According to Kelley Blue Book, the cost of EVs is ‘well above industry average and more aligned with luxury prices versus mainstream prices.’

During the first half of this year, electric vehicle sales accounted for about 15 percent of California’s new vehicle market.

A major uncertainty about the policy is how quickly precious minerals, specifically lithium, will be available to produce large amounts of batteries needed to fulfill the 2035 target.

She urged the state to support incentives for consumers to buy EVs and to help build out a charging system.

There are 17 other US states that have joined California’s movement that account for about 40 percent of all US new vehicle sales. If you’re an aspiring vehicle designer, forget supercars. Figure out trucks. That’s where the big money is. Ford’s F-series pickups are the […]