Business is booming for Britain’s chimney sweeps, as soaring numbers of households open up their fireplaces and fit woodburners to help combat soaring energy bills.

As many as 300,000 households have installed woodburners in the past year alone, adding to the three million who already use these and open fires to heat their homes.

Households that for years have relied on central heating for warmth are preparing their chimneys, flues and fireplaces for a winter of log fires. 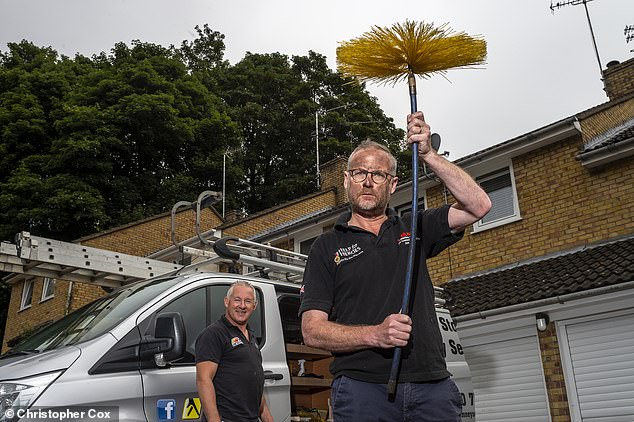 In the 19th Century, sweeps would regularly recruit small children as assistants to do the dirty work of clearing out chimneys. Today Richard Mardell, owner of Bishop’s Stortford Chimney Services in Hertfordshire, has begrudgingly accepted the services of an ageing journalist too fat to fit up a chimney.

Our first job of the day is at a three-bedroom terrace home belonging to retired bank manager Linda Hinton, 63, in the village of Bengeo, Hertfordshire.

Linda spent £1,300 on installing a woodburner last year, a more efficient alternative to the open fire she previously used.

‘Using the burner means I now hardly need to put the central heating on,’ she says. ‘It saves me around £500 a year.’

Richard and I cover the carpet with a thick cotton sheet so that not a speck of soot is left behind from the job. I’m then shown how to push a six-inch wide brush up the narrow flue, and then screw one-metre rods to the end, one by one, until the brush hits the top of the flue eight metres above us.

Many homeowners are tempted to save money and clean their chimney themselves, but helping Richard, I can see why a professional – and the correct equipment – is necessary. It is a delicate job, and can be messy if not done with care.

But Richard, a former firefighter of 30 years, tells me there is another reason why doing it yourself can be dangerous. ‘A professional will issue you with a certificate to show the chimney has been correctly cleaned,’ he says. ‘Most home insurers demand to see one before paying out a claim.

‘House fires caused by a chimney are extremely rare. But if the worst happens, a certificate will help ensure your home and its contents are fully covered by your insurer.’

Richard says that the rise in energy bills this year means that he has never been busier.

‘From now to Christmas, I will be working flat out cleaning up to a dozen chimneys a day,’ he says. ‘But this is a rewarding job – bringing a lovely fire to the home and making it safe.’

It is hard graft being a sweep and it’s not long before I need a sit down and have a cup of tea. But, Richard is as fit as a flea, visiting a gym most mornings at dawn before work.

YOU COULD SAVE UP TO A THIRD OFF YOUR BILLS

Modern woodburners are far more efficient than an open fireplace – where half the heat can disappear up the chimney. They can also work out cheaper than central heating if you spend most of your time in one room.

A woodburner can knock 30 per cent off yearly heating bills, according to stove maker Charnwood. How much you save depends on the length of time you have your central heating on and how much fuel you burn.

If you still use central heating in the rest of your home – as well as for heating water – it may end up costing you more.

A new stove costs anywhere between £500 and £3,000 to buy and install by a Heating Equipment Testing and Approval Scheme (Hetas) qualified expert. The cost of installing a flue is £350 to £1,500 or more.

CHIMNEY MUST BE SWEPT ONCE A YEAR

The average cost of sweeping a chimney is £60. It must be done once a year to tackle the build-up of soot and any hazards such as birds’ nests. A flue that has not been used for years must be professionally checked before it can be used safely. This can cost up to £200 and if cracks are found you may need to reline the entire chimney.

WHAT ABOUT THE POLLUTION FACTOR?

Woodburning stoves are one of the UK’s biggest sources of particulate air pollution, according to Government data. This type of pollution can lead to health issues and has an environmental impact. If you have one, there are ways to significantly reduce their negative impact.

Woodburners sold today must pass tough emission rules, which were introduced earlier this year. As a result, they kick out 90 per cent less pollution than open fires. Such stoves are future-proofed and are unlikely to be banned in any new regulations in years to come.

Older burners and open fires are still legal at the moment, but in the future you must only install new eco-design stoves.

So-called ‘clean air zones’ are also being introduced in many towns and cities banning old woodburners and open fires. Check with the council for rules where you live. If you are considering a woodburner to cut energy bills, there are many cheaper, more environmentally friendly alternatives, such as installing insulation, tackling draughts and updating your boiler. 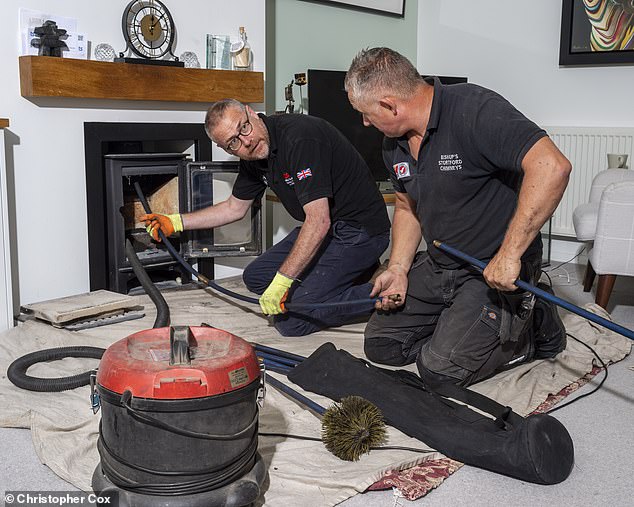 Cleaning up: Toby and Richard’s first job of the day was at a three-bedroom terrace home belonging to retired bank manager Linda Hinton

BE SURE TO BUDGET FOR THE PRICE OF FUEL

The cost of logs is rising, thanks to increased demand. You can expect to pay about £100 for a cubic metre of seasoned logs to be delivered to your home. This is as much as double the price five years ago and up 20 per cent on last year. A cubic metre should be enough to last at least month.

If you enjoy a fire every night you could end up spending £20 to £30 on burning logs each week – depending on how much fuel is consumed in the evening.

Buying in bulk works out cheaper and you can save money getting your logs from specialists rather than garage forecourts.

Freshly cut wood can cost around £60 for a cubic metre. This must often be left outside for at least a year to season so the sap can dry.

Kiln-dried wood with a lower moisture content can cost more than £150 per cubic metre.

For firewood to burn efficiently it needs to have a low water content. It is now illegal to sell bags of wood with a moisture content higher than 20 per cent. You can buy a moisture meter to check your wood is dry enough for around £20.

Vincent Thurkettle, author of The Wood Fire Handbook, says you may be able to source your fuel for free. He says: ‘There is nothing better than enjoying the pleasure of a blazing fire – as we have for thousands of years. Part of this pleasure can be foraging for free wood.’

You must ask permission from a landowner before cutting up a fallen tree – or felling one – on private land. But although the wood is free, tools such as a £200 chainsaw and a £40 log-splitting maul are vital.

It is rewarding but hard work – and requires health and safety considerations, such as learning how to use a chainsaw and being equipped with protection trousers, goggles and gloves. Once cut, you should store the wood in a well-ventilated woodpile or shed at least a year before burning.

Although coal is another option for open fires and ‘multi-fuel’ woodburners, it has fallen out of favour in recent years as it is more of a polluter than wood. Smokeless coal is the only option permitted in most towns. But costing about £20 for a 25kg bag, it is increasingly not as good value as wood.

When using a stove you should ideally use just wood or coal – and not both – as woodburners are best set for either one or the other.

Be wary of burning cash on electric ‘fires’ 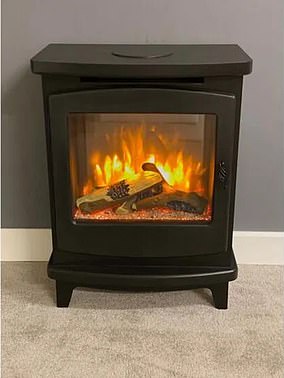 Hot stuff: An electric fire imitates the welcoming glow of the real thing

An electric fire imitates the welcoming glow of the real thing – without the hassle of having to get the flue cleaned or emptying a grate full of ash once a week.

But the rising cost of electricity can make it an expensive option.

When the new price cap kicks in next month, the cost of keeping one on for an hour will be around 68p on average.

You could use a streaming service on your TV to recreate the effect of flickering flames. 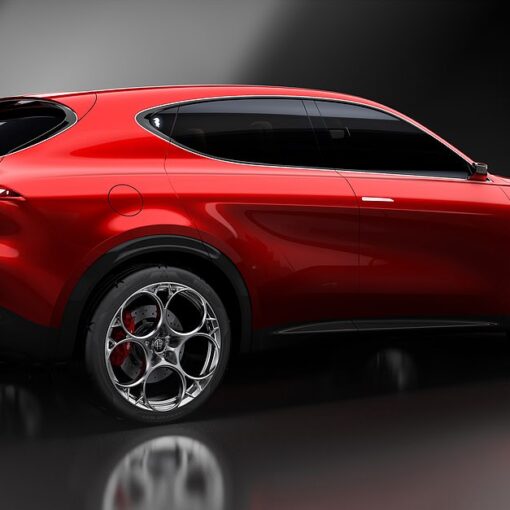 With a new year comes a plethora of new motors, as 2022 looks set to continue car makers’ transition away from internal […] 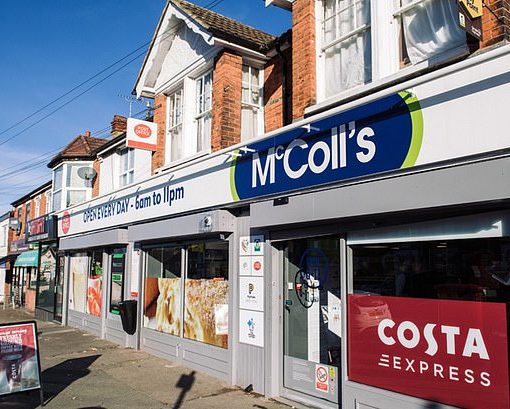 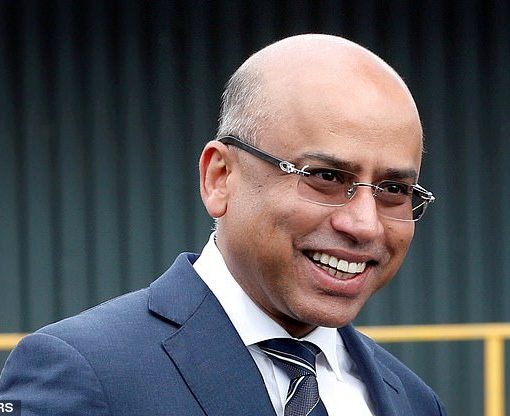 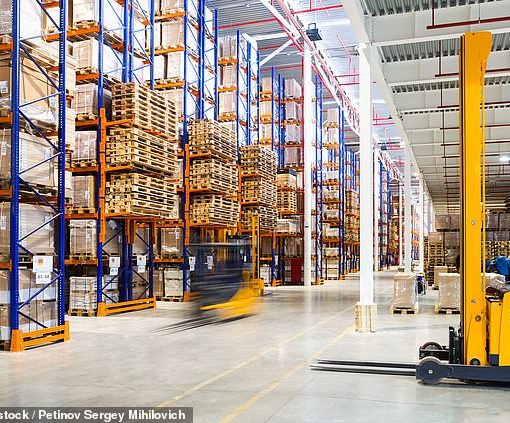