For any astronauts hoping to survive on the surface of the moon, growing crops will be an essential.

Now, scientists have taken ‘one small step’ towards growing plants on the lunar surface, after showing it’s possible to grow thale cress in lunar soil – albeit here on Earth.

Researchers from the University of Florida grew the plants in soil collected by NASA during the Apollo 11, 12 and 17 missions.

The findings raise hopes that plants could be grown on the moon during future space missions, and even enable mankind to set up a lunar colony.

‘For future, longer space missions, we may use the Moon as a hub or launching pad,’ explained Professor Rob Ferl, one of the study’s authors.

‘It makes sense that we would want to use the soil that’s already there to grow plants.’ 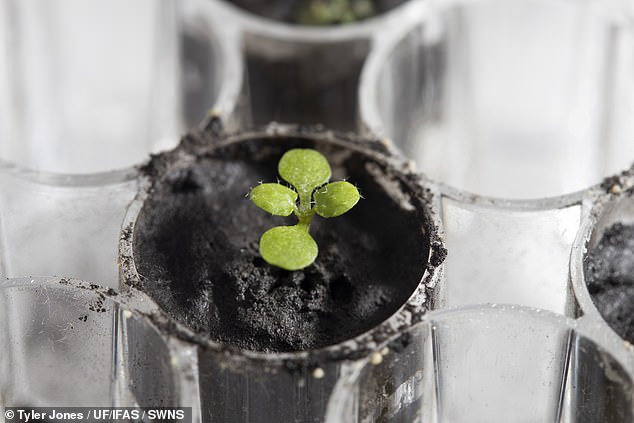 Scientists have taken ‘one small step’ towards growing plants on the lunar surface, after showing it’s possible to grow thale cress in lunar soil 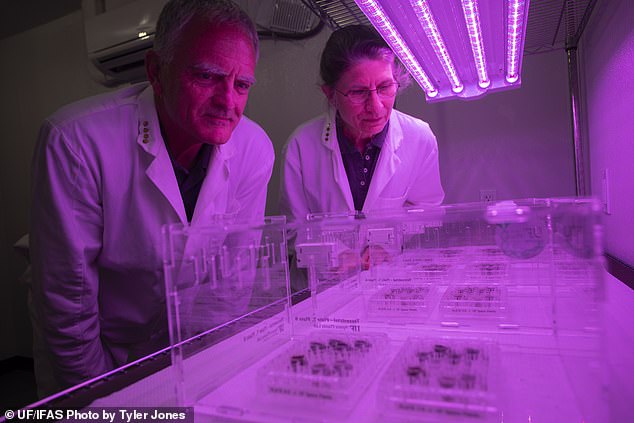 Researchers from the University of Florida grew the plants in soil collected by NASA during the Apollo 11, 12 and 17 missions

Lunar soil could potentially be converted into rocket fuel to power future missions to Mars, a new study has found.

Analysis of coarse and jagged dirt granules brought back by China’s Chang’e 5 spacecraft found that regolith on the moon contains compounds that convert carbon dioxide into oxygen.

The soil is rich in iron and titanium, which work as catalysts under sunlight and could turn carbon dioxide and water released by astronauts’ bodies into oxygen, hydrogen and other useful by-products like methane to power a lunar base.

As liquified oxygen and hydrogen make rocket fuel, it also opens the door for a cost-cutting interplanetary gas station on the moon for trips to the Red Planet and beyond.

This is seen as a vital next step for space agencies around the world because it is so expensive to launch goods into orbit.

While previous studies have dusted plants with lunar soil (also known as regolith) to test for pathogens, until now, scientists have not grown plants in the soil.

‘So, what happens when you grow plants in lunar soil, something that is totally outside of a plant’s evolutionary experience? What would plants do in a lunar greenhouse? Could we have lunar farmers?’ Professor Ferl questioned.

To answer these questions, the team set out to plant thale cress seeds in lunar soil, add water, nutrients, and light, and see what happened.

However, the team only had 12 grams of lunar soil on loan from NASA to do this with, meaning they had to carry out the experiment in thimble-sized wells instead of full-sized pots.

The researchers chose to use thale cress (Arabidopsis thaliana) because its genetic code has already been fully mapped.

For comparison, the researchers also planted seeds in a range of terrestrial soils, including those that simulate Martian soils.

To their delight, the researchers found that nearly all of the seeds sprouted.

‘We were amazed. We did not predict that,’ said Professor Anna-Lisa Paul, one of the study’s authors.

‘That told us that the lunar soils didn’t interrupt the hormones and signals involved in plant germination.’

However, the team did observe differences between the plants grown in the lunar soil, and those grown in the control soils.

Some of the plants grown in the lunar soils were smaller, while others grew more slowly or were more varied in size. 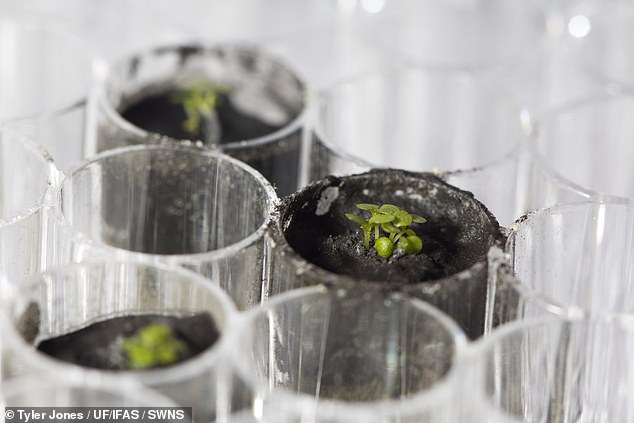 The team set out to plant thale cress seeds in lunar soil, add water, nutrients, and light, and see what happened

This suggests that the plants have to work to cope with the chemical and structural makeup of the lunar regolith, according to Professor Paul.

These findings were confirmed in a follow-up study looking at the plants’ gene expression patterns.

‘At the genetic level, the plants were pulling out the tools typically used to cope with stressors, such as salt and metals or oxidative stress, so we can infer that the plants perceive the lunar soil environment as stressful,’ Professor Paul explained. 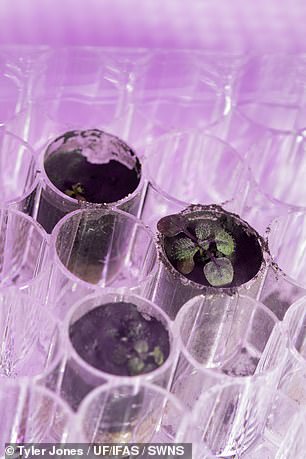 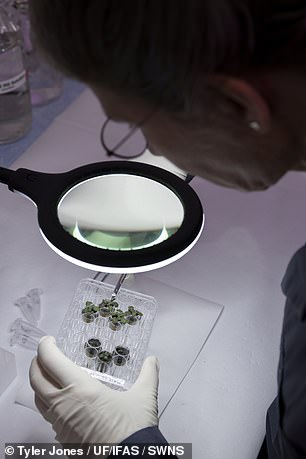 The team did observe differences between the plants grown in the lunar soil, and those grown in the control soils

‘Ultimately, we would like to use the gene expression data to help address how we can ameliorate the stress responses to the level where plants — particularly crops — are able to grow in lunar soil with very little impact to their health.’

Growing plants in lunar soils may also change the moon itself, according to Dr Stephen Elardo, who collaborated on the study.

‘How will minerals in the lunar soil respond to having a plant grown in them, with the added water and nutrients? Will adding water make the mineralogy more hospitable to plants?’

The researchers hope to answer these questions in follow-up studies.

The study comes as NASA’s Artemis Programme kicks off, with the goal of sending humans back to the Moon by 2025.

‘Artemis will require a better understanding of how to grow plants in space,’ Professor Ferl concluded.

WHAT WAS THE APOLLO PROGRAM?

Apollo was the NASA programme that launched in 1961 and got the first man on the moon eight years later.

The first four flights tested the equipment for the Apollo Program and six of the other seven flights managed to land on the moon.

The first manned mission to the moon was Apollo 8 which circled around it on Christmas Eve in 1968 but did not land.

The crew of Apollo 9 spent ten days orbiting Earth and completed the first manned flight of the lunar module – the section of the Apollo rocket that would later land Neil Armstrong on the Moon.

Armstrong and Aldrin walked on the lunar surface while Michael Collins remained in orbit around the moon.

When Armstrong became the first person to walk on the moon, he said, ‘That’s one small step for (a) man; one giant leap for mankind.’

Apollo 12 landed later that year on 19 November on the Ocean of Storms, writes NASA.

Apollo 13 was to be the third mission to land on the moon, but just under 56 hours into flight, an oxygen tank explosion forced the crew to cancel the lunar landing and move into the Aquarius lunar module to return back to Earth.

Apollo 15 was the ninth manned lunar mission in the Apollo space program, and considered at the time the most successful manned space flight up to that moment because of its long duration and greater emphasis on scientific exploration than had been possible on previous missions.

The last Apollo moon landing happened in 1972 after a total of 12 astronauts had touched down on the lunar surface.

Astronaut Edwin ‘Buzz’ Aldrin unpacking experiments from the Lunar Module on the moon during the Apollo 11 mission. Photographed by Neil Armstrong, 20 July 1969 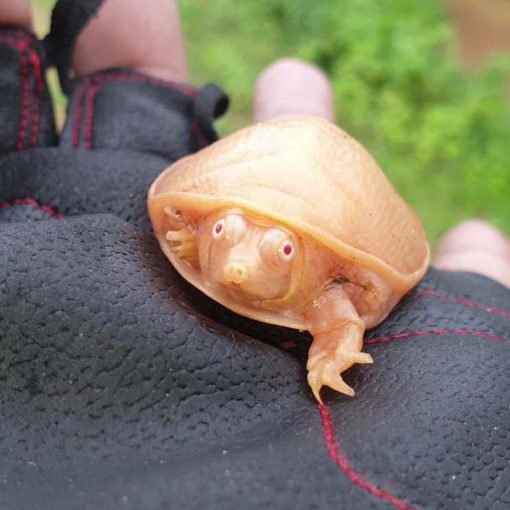 Wildlife photographers spotted an unusually pale, red-eyed turtle hatchling in Telangana state, which was identified as a flapshell turtle with albinism Life […] 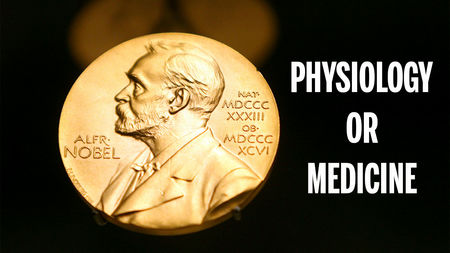 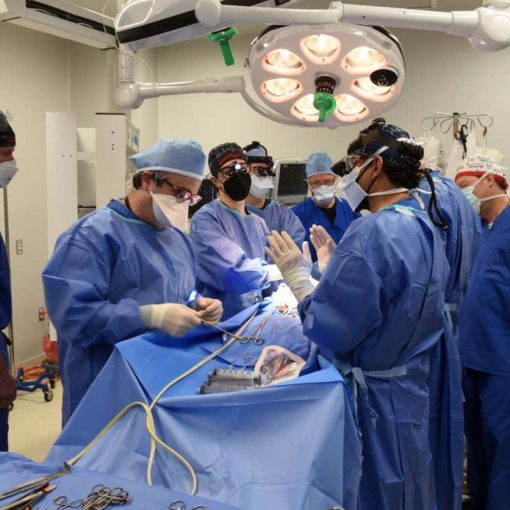 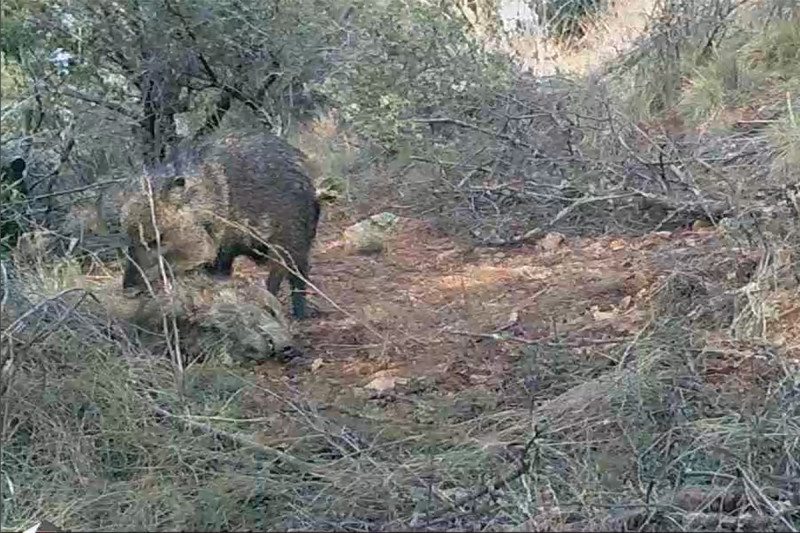