“Things have not been going great for the world’s most powerful social media platform,” said Seth Meyers on Wednesday evening, a day after a former employee-turned-whistleblower informed a congressional panel that Facebook’s leadership ignored research on how algorithms promote harmful content to encourage engagement at all costs.

The hearing with whistleblower Frances Haugen, 37, who worked on Facebook’s civic integrity team, came a day after a server issue brought down the company’s suite of apps – Messenger, Instagram and WhatsApp – for six hours, the worst Facebook outage since 2008. The outage highlighted the extent to which some people and businesses depend on the company; in some countries, Facebook essentially serves as the public internet.

“It is, to say the least, not good that what amounts to a global public utility is controlled by one massive, secretive international conglomerate,” said Meyers. “It’s like finding out that all the drinking water in the world is controlled by some company called AquaBuds and it’s run by some weird little dude who created the company out of revenge because none of the cute girls at his college would give him a glass of water.”

On Wednesday, Facebook’s CEO, Mark Zuckerberg, posted a lengthy statement on the platform defending the company’s decisions. “Zuckerberg likes to present a glowing portrait of what his platform does, but in reality what Facebook hides from the public is much more revealing,” Meyers said.

As CNN explained on Wednesday, the company hid a first-quarter report which showed that one of the most popular links through the platform’s algorithm sowed doubt over the vaccine. But “even if it didn’t eventually leak, you don’t need to be a data analyst to know that Facebook can be a toxic stew of conspiracy nonsense and that’s part of the business model,” said Meyers.

“No corporation, let alone a single individual, should have this much power over how we communicate,” he concluded.

On the Late Show, Stephen Colbert explained the potential, and potentially devastating, financial crisis if Congress does not raise the federal debt ceiling by the end of next week. “It would be an easily avoidable, unthinkable act of self-destruction – so, highly likely,” he joked.

“Let me set the stage: Democrats are ready to vote to raise the debt ceiling,” he explained. “But Republicans are doing nothing to help, and plenty to hinder.”

To break the gridlock, Joe Biden has said he might revise the Senate’s filibuster rules to allow Democrats to raise the debt ceiling without Republican support. “This should be a no-brainer,” said Colbert. “Just get rid of the filibuster. It’s an old rule historically used to preserve racist policies. It’s not in the constitution, and yet it’s blocking the United States’s ability to stay solvent.

“Keeping the filibuster would be like an EMT trying to defibrillate someone and going, ‘Here we go – oh, you know, I’d love to save his life but I can’t. He’s wearing white after Labor Day. Well, he will be missed – not in those pants.’”

Potentially changing the filibuster has the Senate minority leader, Mitch McConnell, “shaking in his orthopedic wingtips”, he added. So on Wednesday, the Kentucky Senator said Republicans would allow an extension of the federal debt ceiling into December. “They’re willing to avoid blowing up the world’s financial system – until Christmastime,” Colbert lamented. “So, everyone, remember to ask Santa for a functional economy.”

And in Los Angeles, Jimmy Kimmel once again took aim at Fox News: according to a Media Matters report, the network has undermined the Covid vaccine on-air nearly every day for the past six months. “The two days they didn’t undermine it were the days they took off to go get the vaccine,” Kimmel quipped.

“Speaking of destroying America,” he added, Mark Zuckerberg responded to allegations of negligent conduct and putting profits over safety with a lengthy Facebook post. Haugen “claimed, among other things, that Facebook prioritizes angry posts – they get the most traction,” said Kimmel. “Zuckerberg rejected those claims in an angry post.”

The Facebook CEO added: “If we wanted to ignore research, why would we create an industry-leading research program to understand these important issues in the first place?”

“Yeah, that’s kinda the point,” Kimmel responded. “You guys know what you’re doing and you’re doing it anyway. It’s like a Bond villain saying ‘If I’m so evil, why did I tell 007 the whole plan while I was lowering him into a vat of boiling piranhas?”

Four years on from the UK’s Brexit vote, a majority of British voters would now opt to remain inside the European Union, […] 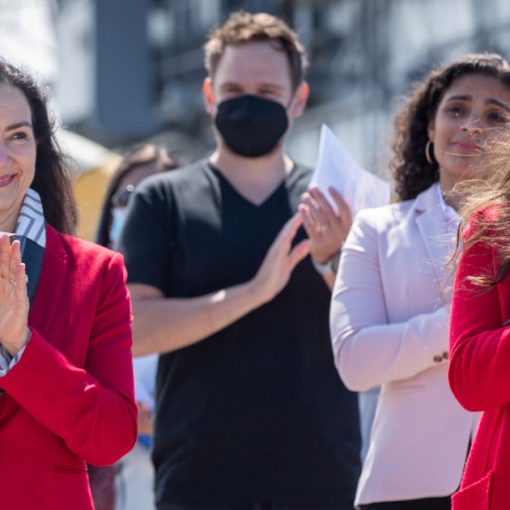 BERLIN (AP) — The western European parties to the landmark nuclear deal with Iran on Saturday criticized a U.S. decision to end […]