September is usually one of the two biggest months of the calendar for car dealers, but this year’s sales have been crippled by the ongoing shortage of semiconductor computer chips causing huge delays for the latest models, data suggests.

There were 215,312 cars registered in September, down by more than a third on last year, latest industry figures show.

It’s the weakest performance for motor registrations in September since 1998 – the year before the current two-plate system (one in March and one in September) was introduced.

Yet demand for electric cars was at an all time high, with Tesla’s Model 3 the best-selling vehicle and total sales of EVs in September falling just 5,000 shy of full-year registrations in 2019. 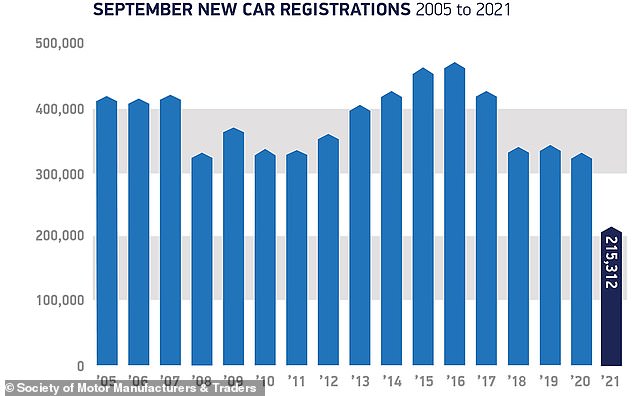 Weakest September for car registrations for 23 years: The last time sales of new motors was this low was 1998 – the year before the UK introduced a two-plate per calendar year system

The short supply of computer microchips has been limiting outputs at car plants throughout 2021, with some manufacturers forced to pause assembly lines and reduce shift patterns.

In some cases, such as at Jaguar Land Rover, customers have been warned they may have to wait for more than 12 months for the arrival of some new models in ordered today, such is a the scale of the chip shortage.

The Society of Motor Manufacturers and Traders confirmed today that the continued impact on outputs of new cars sparked a 34.4 per cent decline in registrations last month.

That compares to a 2020 September when pandemic restrictions were significantly curtailing economic activity.

Against the pre-pandemic ten year average, official records show that last months registrations were down a massive 45 per cent.

Mike Hawes, SMMT chief executive, described it as a ‘desperately disappointing September’ and ‘further evidence of the ongoing impact of the Covid pandemic on the sector’.

He said in a statement: ‘Despite strong demand for new vehicles over the summer, three successive months have been hit by stalled supply due to reduced semiconductor availability, especially from Asia.

‘Nevertheless, manufacturers are taking every measure possible to maintain deliveries and customers can expect attractive offers on a range of new vehicles.’ 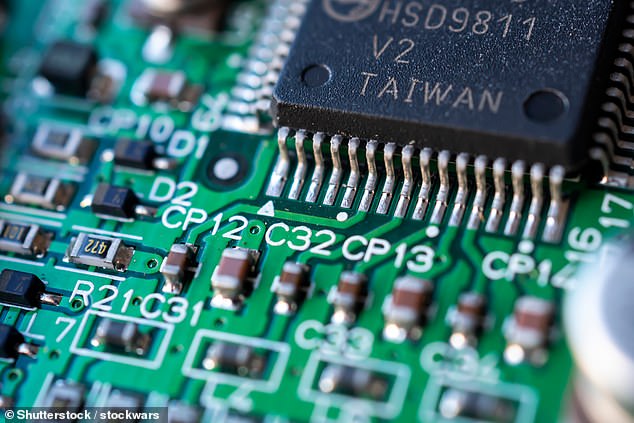 Experts say it’s important not to mistake lower than expected volume of registrations as a dip in demand, with new cars curtailed by a lack of semiconductor computer chips

Jim Holder, editorial director, What Car?, says manufacturers are ‘struggling to meet demand’ because of the chip shortage, with even the most optimistic predictions saying normality won’t return to the car manufacturing sector until midway through 2022.

‘For buyers, this means longer waiting times on new cars than many are willing to accept,’ he explained.

‘Our own research shows just 13 per cent of new car buyers are willing to wait more than 16 weeks for their next car before considering alternatives.’

That alternative has been a switch to the used car market, though that in turn has also squeezed supply of quality second-hand motors and pushed average values to record high levels in recent months.

Richard Peberdy, UK head of automotive at KPMG, said the decline in registrations last months could also have been triggered by consumers tightening their purse strings:

He adds: ‘Intense new vehicle supply issues due to the likes of chip shortages and some remaining Covid-related factory output problems will be limiting some sales, while levels of inflation in parts of the economy are also spooking motorists and businesses into tightening spending.’

However, Ian Plummer, commercial director at Auto Trader, said it is important not to mistake the lower than expected volume of September registrations for a dip in demand.

‘Nothing could be further from the truth. The issue is all about supply,’ he explained.

‘According to our market intelligence, while they’d surely prefer to register more cars and realise revenue sooner, most retailers and brands have record new car order banks.’ 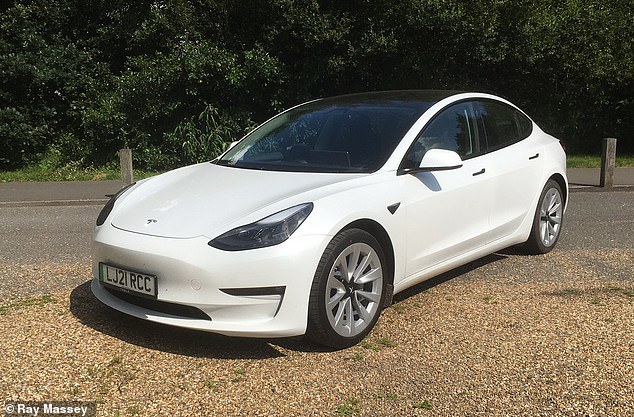 Tesla’s Model 3, which starts from £40,990 and is not eligible for any government grants, was Britain’s best-selling new model in September

While EV sales were up 49.4% in September, diesel and petrol registrations slid by a massive 77.3% and 46.6% respectively last month

It’s not all doom and gloom: September was the best ever month for electric car

While the wider car market posted a worst September for sales in 23 years, it was also the best month on record for new battery electric vehicle uptake.

With manufacturers unable to get their hands on semiconductors required for new petrol and diesel models, availability and supply of EVs appears far less restricted.

With a market share of 15.2 per cent, 32,721 electric cars joined the road in the month, reflecting the wide range of models now available and growing consumer appetite.

While EV sales were up 49.4 per cent in September, diesel and petrol registrations slid by a massive 77.3 per cent and 46.6 per cent respectively.

While Tesla’s Model 3 was the best-selling UK model last month, it hasn’t been enough for it to break into the top 10 most-bought cars for the year to date

This was highlighted by the Tesla Model 3 becoming the best-selling new model in September – the fifth time it has topped sales charts in the UK, but only the second when Covid lockdowns haven’t forced traditional motor dealers to lock their doors.

The electric US model – which costs from upwards of £40,990 and is not eligible for any government grants, recorded 6,879 sales, which was ahead of this year’s front-running new car, the Vauxhall Corsa (5,235 registrations).

That said, the Corsa still sits behind the Ford Transit Custom for 2021 registrations, with 39,503 of the vans hitting the road so far this year due to the spike in online retail activities as well as deliveries.

Showing just how quickly consumer demand for zero-emission cars is growing, September registrations were just 5,000 units shy of the total number of pure electric vehicles bought in the whole of 2019.

Plug-in hybrid share also grew to 6.4 per cent, meaning more than one in five new cars registered in September was zero-emission capable.

Meanwhile, self-charging conventional hybrids grew their overall market share from 8 per cent in 2020 to 11.6 per cent, with 24,961 registered in the month.

It means that one in three new cars in the UK in September were electric or hybrids. 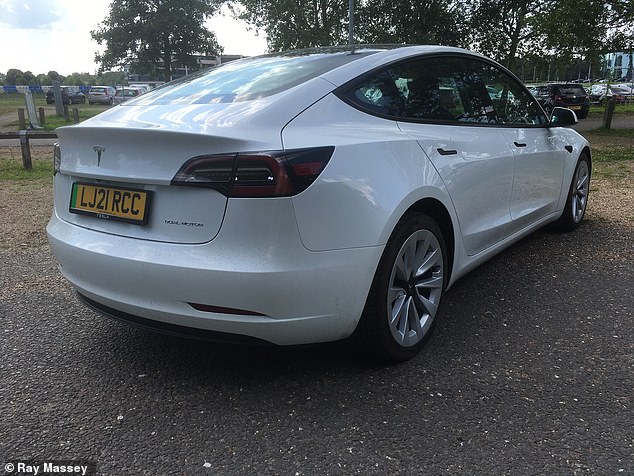 The electric US model – which costs from upwards of £40,990 and is not eligible for any government grants, recorded 6,879 sales, which was ahead of this year’s front-running new car, the Vauxhall Corsa

And it said that ‘enquiries’ for electric and plug-in hybrid models last month had risen by an unparalleled 550 per cent year-on-year.

It says the ongoing fuel crisis, where pumps in many parts of the UK have run dry, is only accelerating demand for EVs, with the biggest rise in searches recorded during the final days of the month when forecourts had to see tailbacks at the pumps.

Analysis of Google search data reveals that online searches for electric cars in the UK exploded 1,600 per cent on 24 September, when petrol station fuel shortages became a widespread phenomenon across the country.

‘Despite the challenges [of semiconductor chip shortages], the rocketing uptake of plug-in vehicles, especially battery electric cars, demonstrates the increasing demand for these new technologies,’ Hawes added in his statement.

‘However, to meet our collective decarbonisation ambitions, we need to ensure all drivers can make the switch – not just those with private driveways – requiring a massive investment in public recharging infrastructure.

‘Chargepoint roll-out must keep pace with the acceleration in plug-in vehicle registrations.’

Despite this boom in electrified car demand, total registrations for the year to date are now only 5.9 per cent ahead of 2020 figures, and almost 30 per cent down on the pre-pandemic decade-long average. 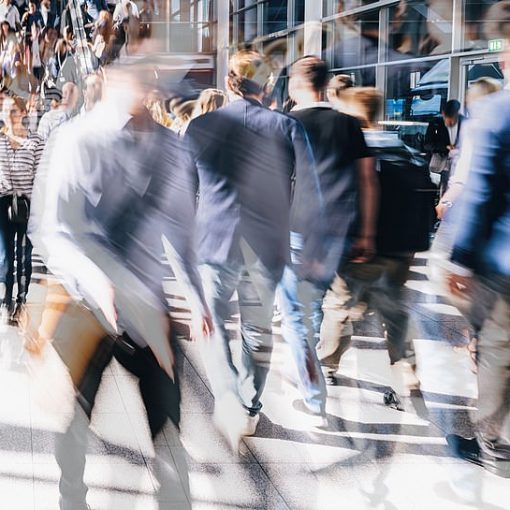 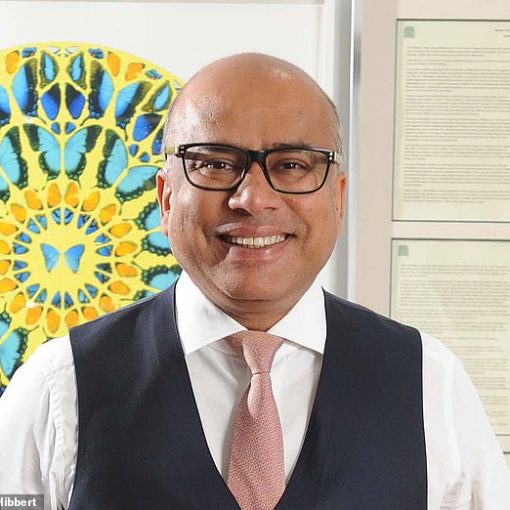 The Government is preparing to trigger an emergency plan to save 5,000 British jobs in the event of a collapse of Sanjeev […] 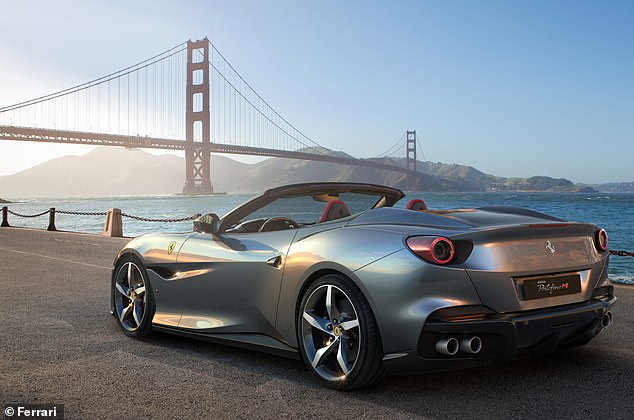 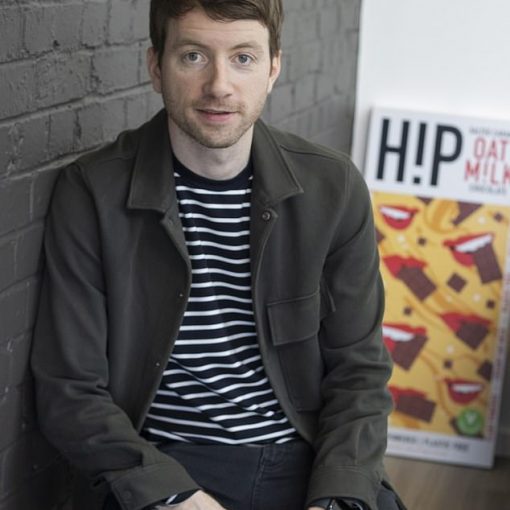 With a surname like Cadbury, you’d think that James Cadbury – the great-great grandson of John Cadbury – founder of the confectionary […]