The US experienced its hottest summer on record in 2021, just edging out the temperatures the country experienced during the infamous 1936 ‘dust bowl.’

The report noted a number of extreme weather events from this summer, as well as temperature records broken across the country.

The states of California, Idaho, Nevada, Oregon and Utah, or 18.4 percent of the contiguous US, all experienced their hottest summers on record, while 16 other states had summers that ranked in the top five warmest on record. 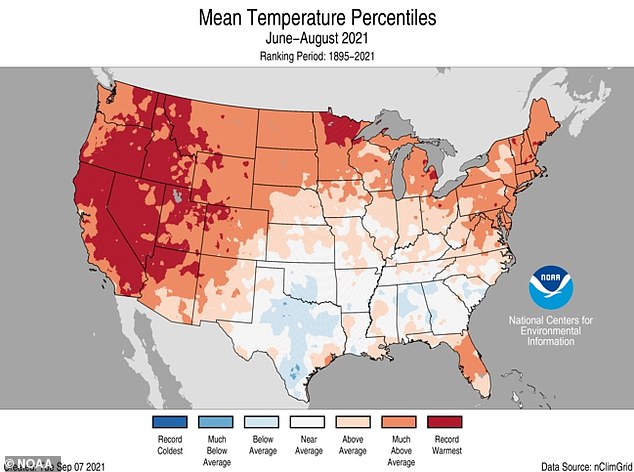 With an average of 74 degrees, temperatures in the US were their hottest on record this summer, just edging out the dustbowl summer of 1936 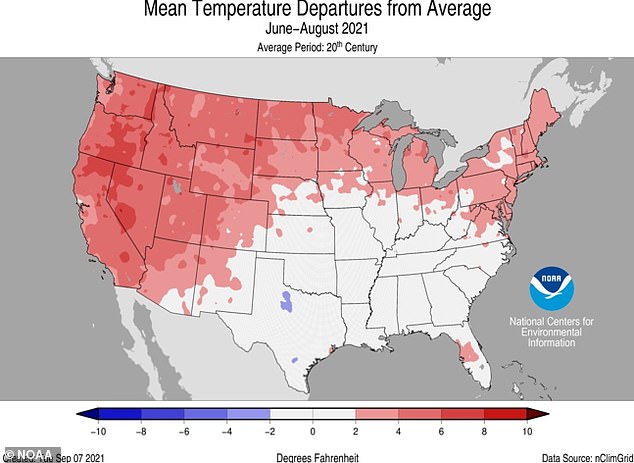 Overall, the summer of 2021 in the mainland US was 2.6 degrees above average.

Overall, the summer of 2021 on the mainland US was 2.6 degrees above average.

Year-to-date temperatures were warmer as well, with California and Maine each reporting their third warmest January through August on record.

Driving up the temperatures were a number of heatwaves that hit the Pacific Northwest in the early parts of summer.

In late June, temperatures in Portland hit a record-breaking 116 degrees and Seattle saw an unprecedented 108 degrees, according to Accuweather. 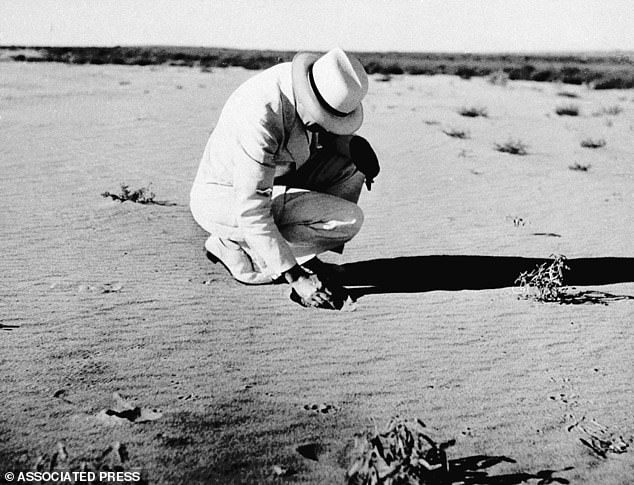 The so-called ‘Dust Bowl Summer’ resulted in triple digit temperatures across much of the Midwest, coupled with drought and severe dust storms. Pictured: Rexford G. Tugwell, rural resettlement administrator and member of the US drought commission in Texas on August 20, 1936 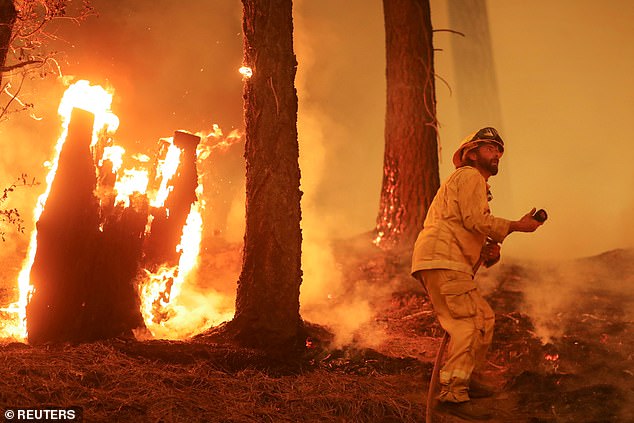 The extreme temperatures this summer have resulted in record wildfires in California. Picture: the Dixie fire, which is now the second-largest in state history, continues to burn out of control

A second heat wave would hit the region again in August, with temperatures in Portland again reaching the triple digits at 102 degrees, and Bellingham Washington saw its heat record broken at 100 degrees.

NOAA scientists noted that in several states, the above-average warmth this summer could be attributed to warmer overnight temperatures. 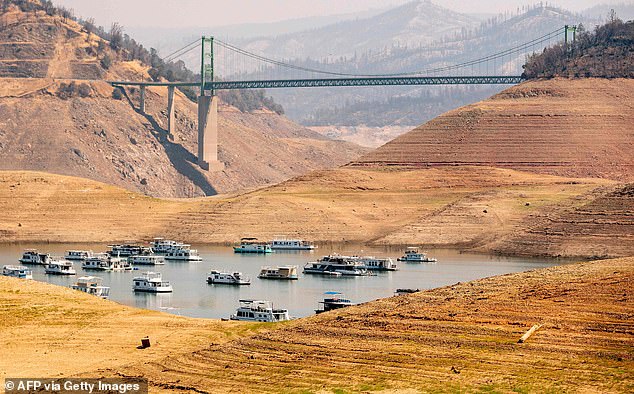 Nearly half of the lower 48 was experiencing drought conditions by August 31, NOAA scientists reported. Pictured: Lake Oroville which is currently at 23 percent of its capacity

Droughts too have become severe, with roughly 46.6 percent of the contiguous US experiencing drought as of August 31, and had expanded throughout the summer, according to researchers, resulting in record-setting wildfires.

The Lake Oroville reservoir, for example is currently at 23 percent of its capacity.

The ongoing Dixie Fire is currently California’s second largest wildfire on record, meanwhile the Caldor fire, also in California, has dangerously impacted air quality in parts of the state. 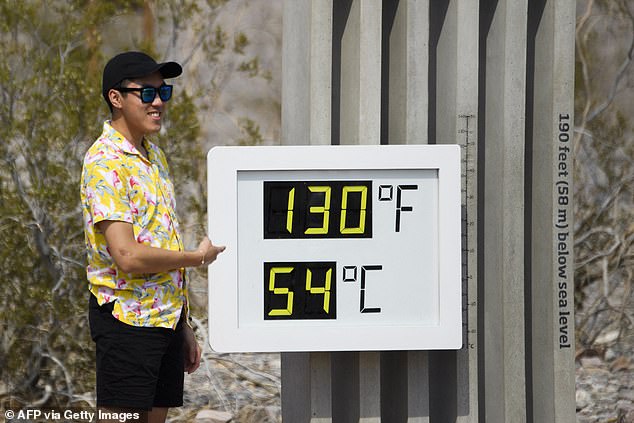 Conversely, the lower 48 experienced its eighth wettest summer on record with 9.48 inches, 1.16 inches above the average, with Tropical Storm Fred, Hurricane Ida, and Tropical Storm Henri all contributing to record rainfall and deadly flooding in places.

While extreme weather has wreaked havoc across the US this year, the Dust Bowl summer of 1936 brought a unique set of conditions including drought, dust storms and insect infestations.

The brutal conditions caused and exodus from Oklahoma and Texas, where dusty conditions had become unbearable, to California.

The dust storms had were so bad that from the midwest to the eastern seaboard, trains would sometime miss their stops due to the blinding conditions, and roofs could collapse under the weight of the dust. 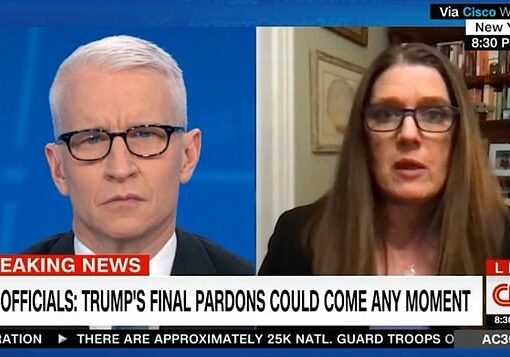 ‘Today is probably worst day of Donald’s life’: Mary Trump predicts ‘grim’ future for her uncle as he leaves White House to […] 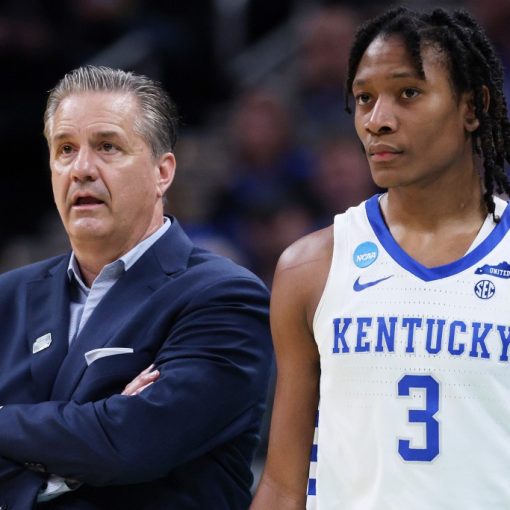 John Calipari gave Saint Peter’s credit, but he was devastated and shellshocked after his No. 2 seed Kentucky team was stunned in […] 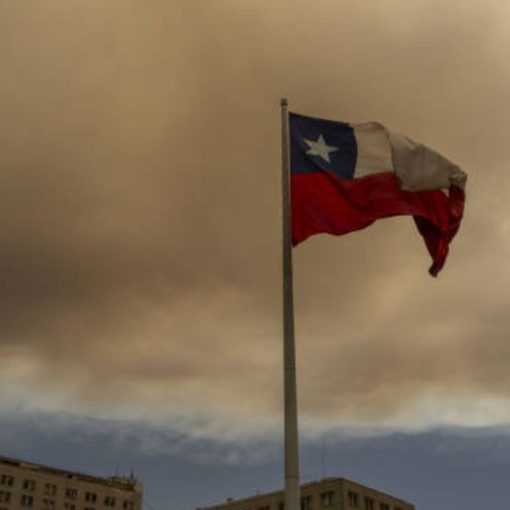 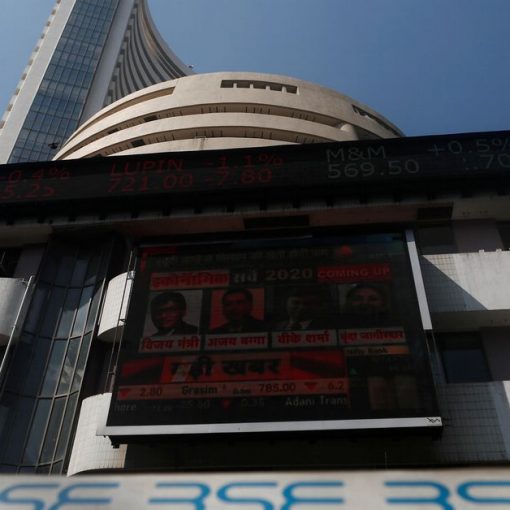