New York, New Jersey and Pennsylvania have been hit by severe flooding and dangerous winds as the remnants of Hurricane Ida sweep up to the northeast.

The National Weather Service’s office in New York issued a Flash Flood Emergency for New York City for the first time ever, as more than 60 million people throughout the northeast are under flash flood watches while Ida – now a tropical depression – moves its way into the area.

New Jersey Gov. Phil Murphy declared a state of emergency ‘effective immediately’ late Wednesday night as the storm caused at least 57,519 power outages statewide. Meanwhile, poweroutage.us shows that 75,250 were without power in Pennsylvania and 25,306 were without power in New York State.

‘These numbers are climbing. Charge your devices and if you experience an outage – call it in immediately,’ Murphy tweeted. 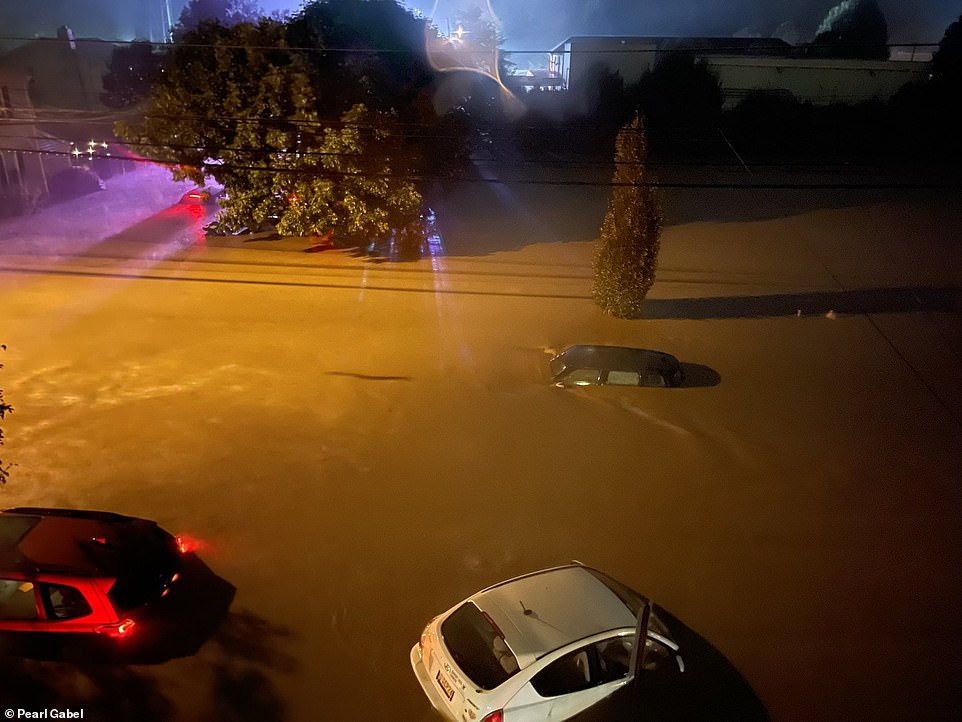 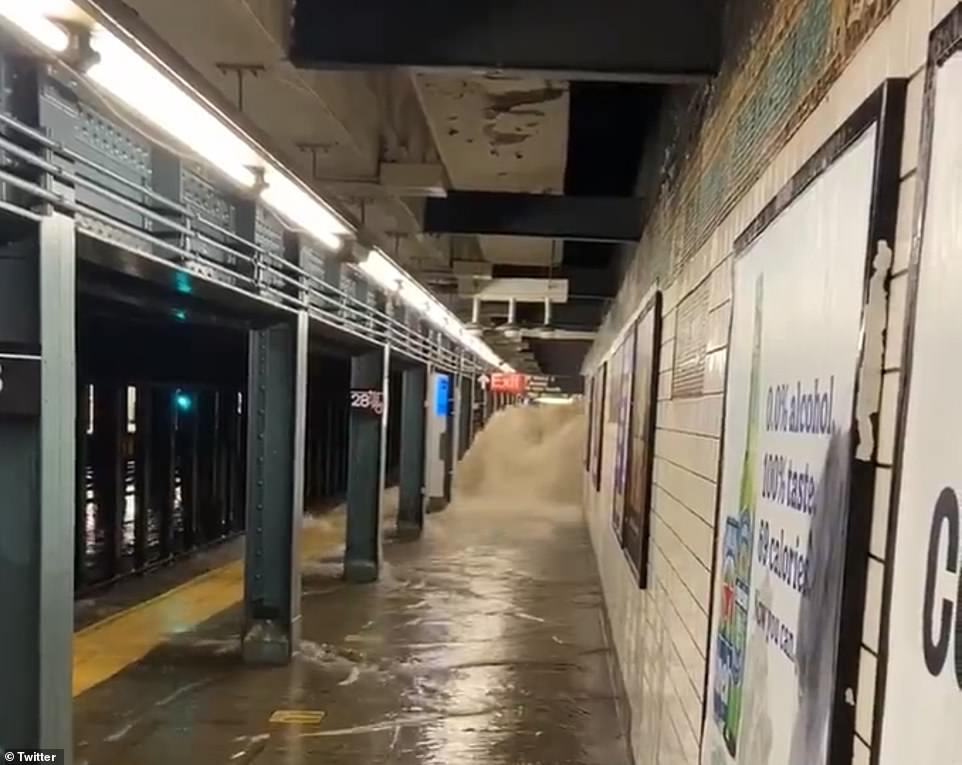 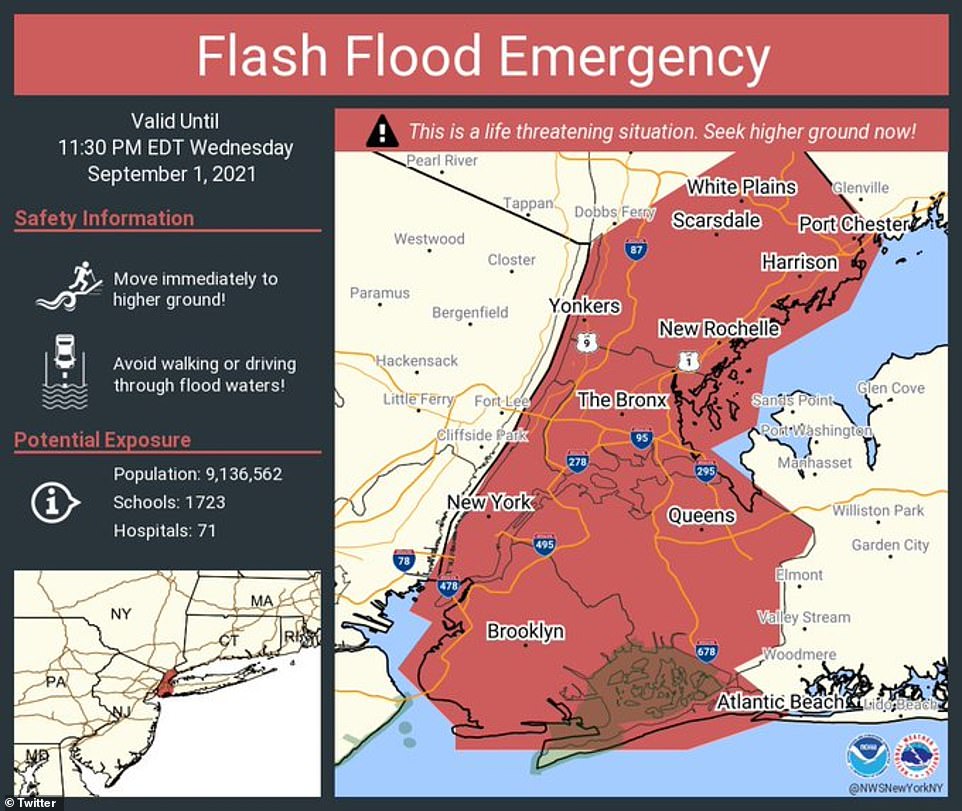 The storm moved east in the evening, with the National Weather Service confirming at least one tornado and social media posts showing homes blown to rubble and roofs torn from buildings in a southern New Jersey county just outside Philadelphia.

Newark Airport reported four inches of rain in a two hour period, as the baggage area of the airport flooded. And the state has suspended some of its NJ Transit train lines and buses.

Meanwhile, in New York City, Queens Boulevard in the neighborhoods of Maspeth and Corona was described as ‘a literal river’ and shocking video shows water flooding a Metropolitan Transportation Authority bus while multiple cars were stuck in the water.

‘Hero bus driver managed to get us safely through the 3-4 feet of rain coursing down the boulevard, but only seemed to be getting worse,’ tweeted Joe English, who works in the press office for UNICEF.

‘Finally made it through to higher ground and a fellow passenger exclaims “oh no I missed my stop”.’

The NYC Office of Emergency Management closed access to the Bronx Whitestone Bridge for some types of vehicles. The bridge is a major access point between the New York City boroughs of Queens and the Bronx, and commuting between Long Island and New England.

‘Due to high winds, there is now a ban on empty tractor trailers, tandem, piggyback, dual and multiple trailers, motorcycles, and minivans on the in both directions,’ the alert reads.

The National Weather Service shared a video of a white SUV floating through flowing water in the Big Apple while warning residents: ‘This is perfect example of what you should not do!’

‘Notice the white car towards the end that is floating. This water is too deep to drive through. Turn Around Don’t Drown!!’ the agency tweeted.

Play was also suspended between Diego Schwartzman and Kevin Anderson at Louis Armstrong Stadium during the U.S. Open – despite the venue have a roof – because of wind and rain. It’s nasty out there, Los Angeles Times sports columnist Helene Elliot tweeted.

Parts of northern Nassau County on Long Island were also under tornado warnings, as the National Weather Service advised there could also be hail from thunderstorms. 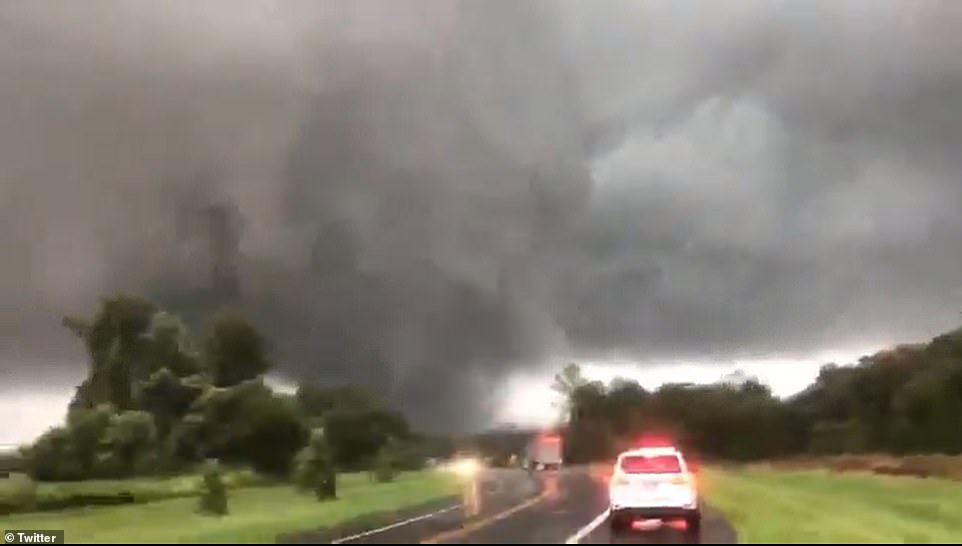 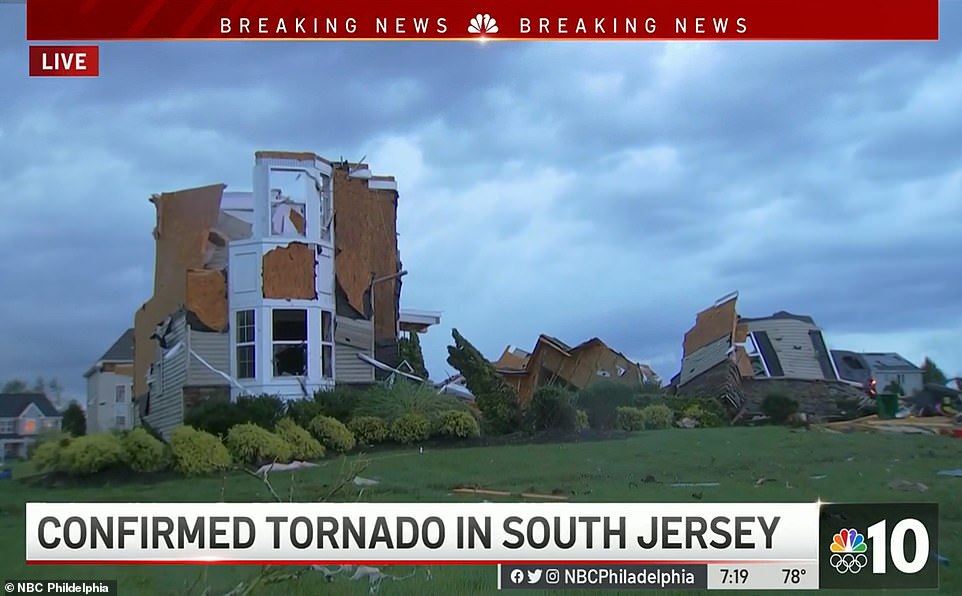 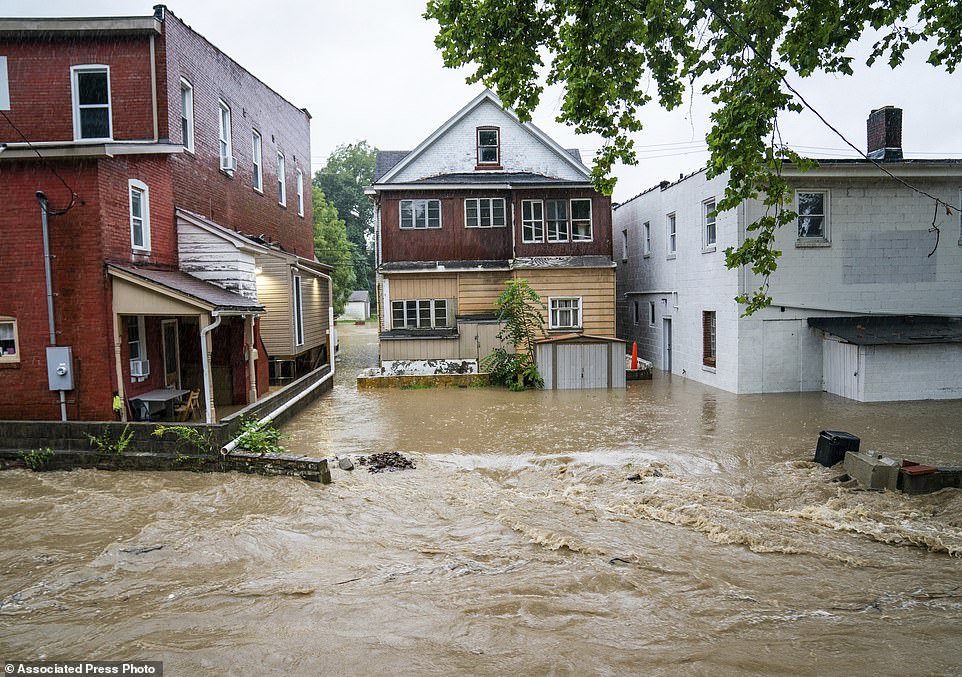 Water floods a street in Bridgeville, Pennsylvan, amid downpours and high winds from the remnants of Hurricane Ida 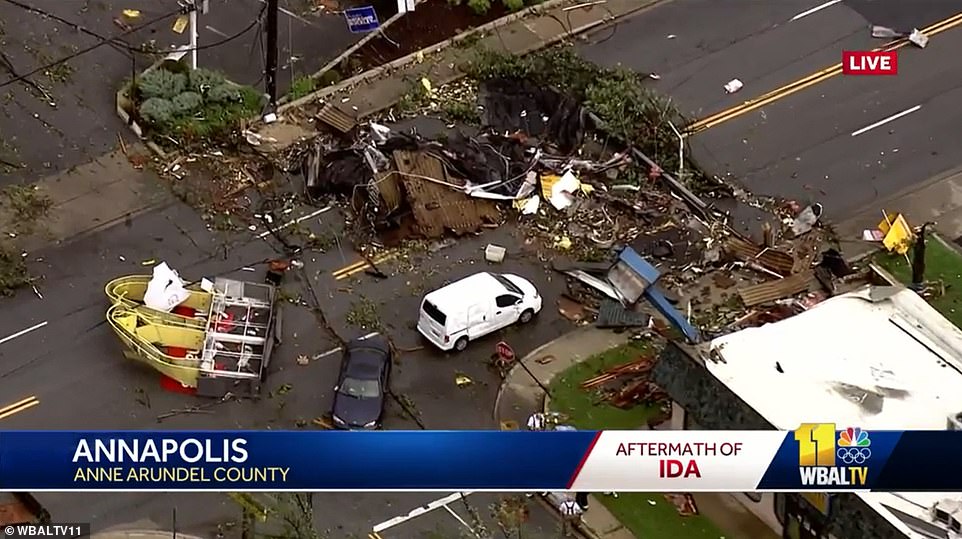 Buildings were destroyed in Annapolis, Maryland after the city was hit my strong winds

Pennsylvania was blanketed with rain after high water drove some from their homes in Maryland and Virginia.

Thousands of people were evacuated Wednesday after water reached dangerous levels at a dam near Johnstown, a Pennsylvania town nicknamed Flood City.

According to the National Weather Service’s Weather Prediction Center: ‘Flash flooding, some of it significant and potentially life-threatening, is expected to go through the late morning and early afternoon hours as TD Ida approaches the region from the southwest.’

‘Flash flood emergency level rainfall impacts are possible as we head into the afternoon hours,’ the Weather Prediction Center said, referring to the highest level flood warning, which indicates immediate and significant threats to life and property.

Two to three inches of rain are expected every hour in the northeast, with total amounts reaching up to six inches. That total could be higher in certain areas.

Northern Virginia, Maryland, Pennsylvania and eastern West Virginia could see the highest impacts from the storm – which has already caused extensive flooding in parts of Louisiana and Mississippi and billions of dollars of damage.

A tornado was believed to have touched down along the Chesapeake Bay in Maryland.

Ida caused countless school and business closures in Pennsylvania. About 150 roadways maintained by the Pennsylvania Department of Transportation were closed and many smaller roadways also were impassable.

Some 18,000 customers were without power, including some 12,000 in central Pennsylvania.

Some areas near Johnstown, whose history includes several deadly floods, saw 5 inches (I2.7 centimeters) or more of rain by mid-afternoon, an inundation that triggered an evacuation order for those downstream from the Wilmore dam.

A 911 dispatcher in Mantua Township, N.J., told The Weather Channel that people were trapped in their basements and that roofs flew off of homes while there were reports of some severe injuries.

There were also reports of multiple buildings with roofs ripped off, damaged trees and debris blocking roads in the north of Philadelphia. Homes were also damaged in Chester County.

Nearby Hinckston Run Dam was also being monitored but appeared stable by late afternoon, he said, by which time water levels at Wilmore dam were receding. 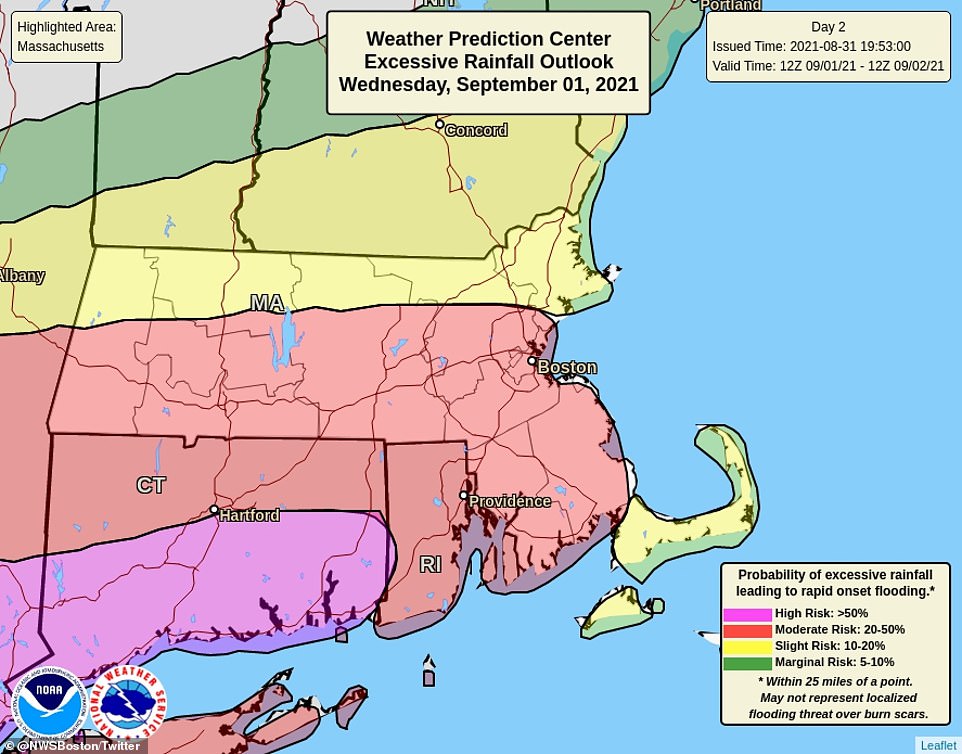 Northern Virginia, Maryland, Pennsylvania and eastern West Virginia could see the highest impacts from the storm 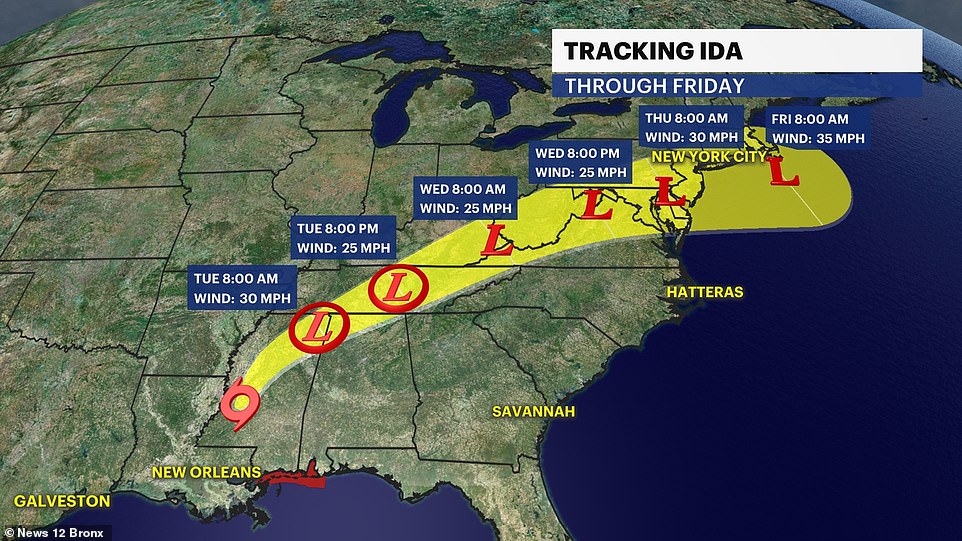 Ida will likely be a tropical rainstorm by the time it reaches the Northeast on Wednesday. Even after it moves off the New England coast later Thursday, residents across the Northeast may still feel the storm’s wrath in the days that follow. Many major metropolitan areas, including Boston, New York City, Philadelphia and Washington, D.C. are under flash flood watch 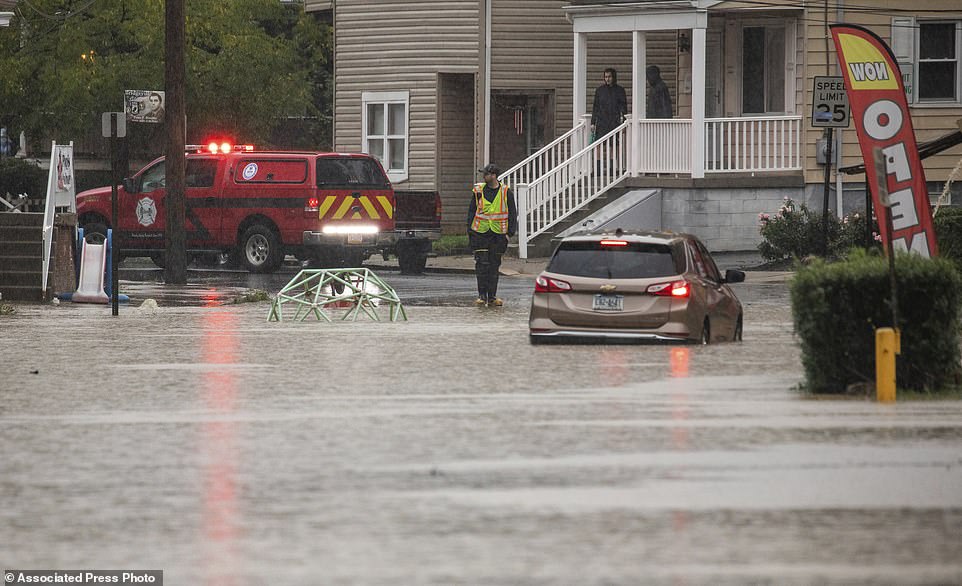 A car is stranded on a flooded street Wednesday in Bridgeville, Pennsylvania

‘If that trend continues we’ll be allowing folks to return back to their residences shortly, hopefully by this evening,’ Martynuska said.

Both dams were considered high-hazard dams that are likely to kill someone were they to fail.

Evacuees were taken to a nearby high school with help from the Red Cross, National Guard, local transit authority and school transportation services, he said.

The 1889 Johnstown flood killed 2,200 people, a disaster blamed on poor maintenance on the South Fork Dam on the Little Conemaugh River. It sent a 36-foot wall of water roaring into a populated area at 40 mph (65 kph).

The National Weather Service had predicted flooding from what remained of Hurricane Ida, saying steep terrain and even city streets were particularly vulnerable to a band of severe weather that extended from the Appalachians into Massachusetts.

Flash flooding knocked about 20 homes off their foundations and washed several trailers away in Virginia’s mountainous western corner, where about 50 people were rescued and hundreds were evacuated. News outlets reported that one person was unaccounted for in the small mountain community of Hurley.

Water had almost reached the ceilings of basement units when crews arrived at an apartment complex in Rockville, Maryland, on Wednesday. A 19-year-old was found dead, another person was missing and about 200 people from 60 apartments near Rock Creek were displaced, Montgomery County Fire Chief Scott Goldstein said Wednesday.

‘In many years I have not seen circumstances like this,’ Goldstein said. 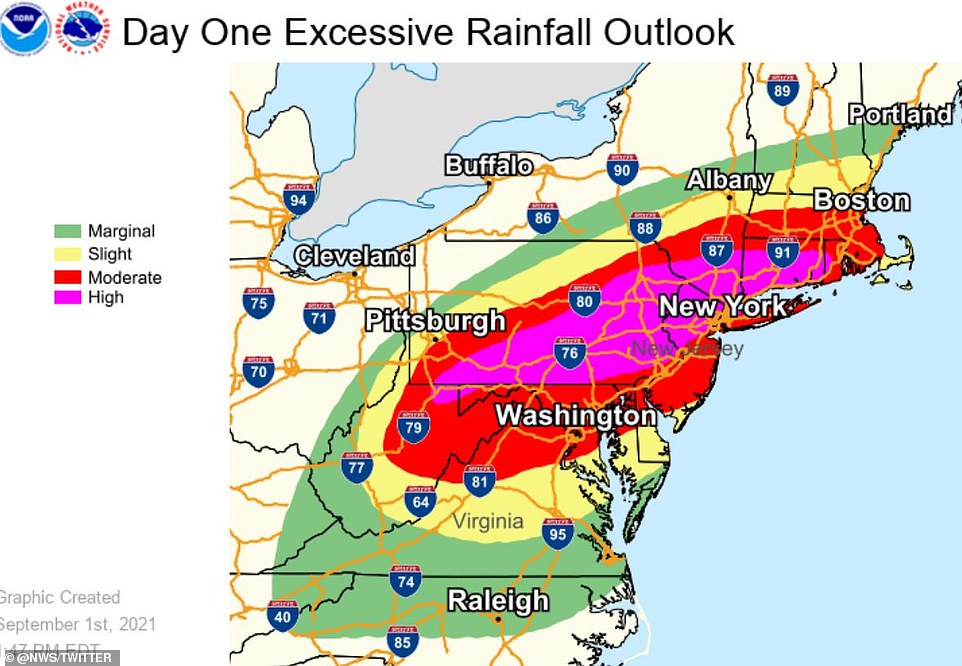 The storm – now a tropical depression – is moving into the northeast, where two to three inches of rain are expected every hour Wednesday evening 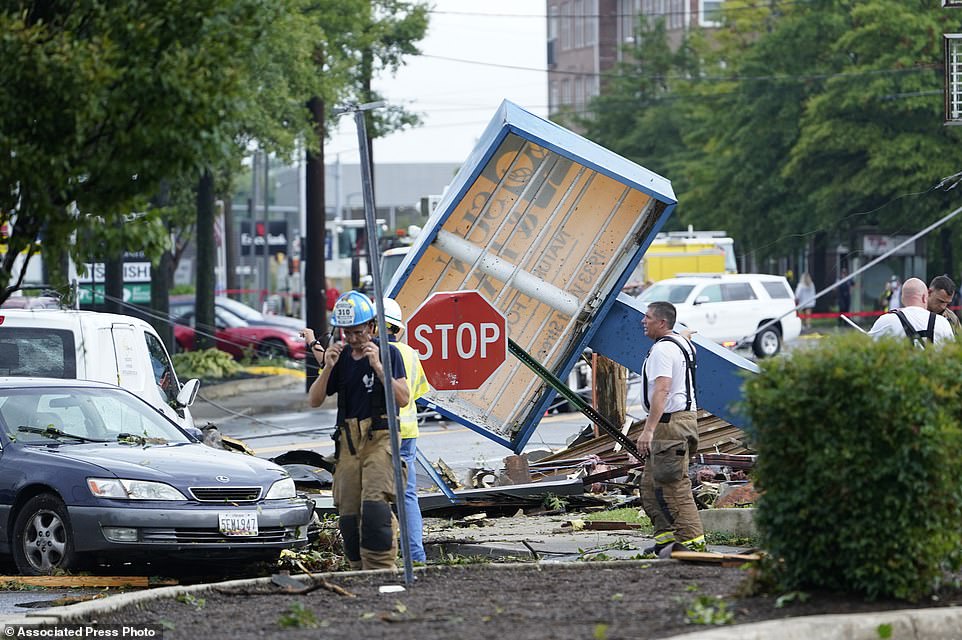 Debris is strewn along West Street in Annapolis, Maryland

Reports of homes and business without power across Pennsylvania increased on poweroutage.us, starting at 8.15p.m.

More than 70,000 homes and businesses were without power in Pennsylvania as of about 6 p.m. Wednesday, according to poweroutage.us.

More than 20,000 of those were in the North of Philadelphia in Montgomery County where a tornado was reported and flooding and water rescues were ongoing.

About 25,000 power outages were also being reported in New Jersey.

Several homes and vehicles are currently taking on water follower after an overflow of a nearby river in Lambertville, New Jersey.

Officials in the state are advising people in North Jersey to seek high ground. 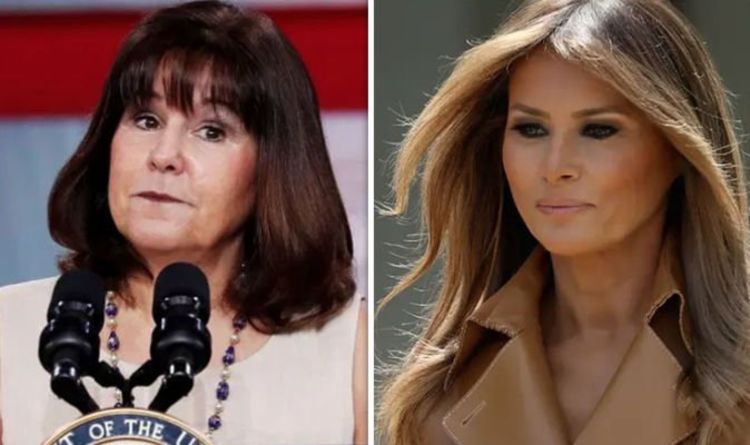 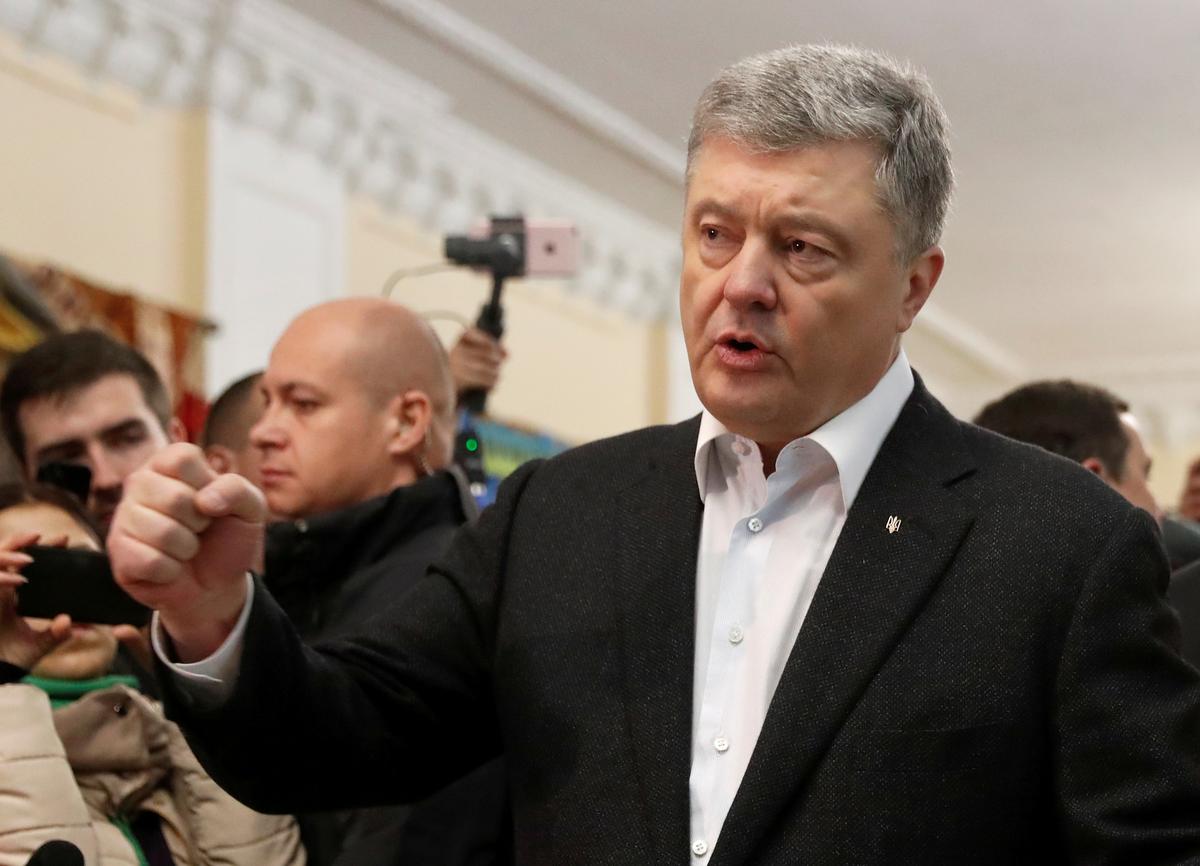 MALE, Maldives (AP) — A Maldives commission of inquiry has concluded that a journalist reported missing since 2014 has been killed possibly […]