The White House delivered a blunt message to Americans stuck in Afghanistan on Friday: If you’re not out by August 31 then we cannot guarantee we will get you out.

During her regular briefing, President Biden’s Press Secretary Jen Psaki said that diplomatic efforts were already under way to set up pathways to allow Americans and other nationals to leave after the deadline – but that would rely on working with the Taliban.

‘Obviously we need to figure out the operational mechanisms,’ she said.

Officials insist they are on course to bring home the last 500 Americans but with U.S. troop numbers already drawing down the clock is running down on the evacuation.

A suicide attack on Thursday that killed 13. U.S. service personnel has only raised the stakes in the high risk effort to keep flying people out of Kabul.

On Friday, Biden was warned that more attacks on the airport were expected.

During her regular briefing, Psaki was asked whether the White House could guarantee that anyone who wanted to get out of Afghanistan could leave after Aug. 31.

‘I don’t think we can guarantee,’ she replied, before adding that the president had directed the secretary of state to work with other nations to secure means for Americans, third country nationals, and Afghans with visas, ‘to leave the country even after the US military presence ends.’ 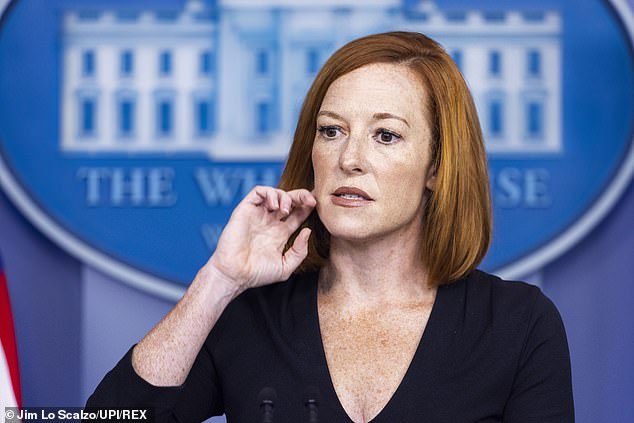 White House Press Secretary Jen Psaki said she could not guarantee that anyone who wanted to leave could get out of Afghanistan once U.S. troops gave up Kabul airport on August 31 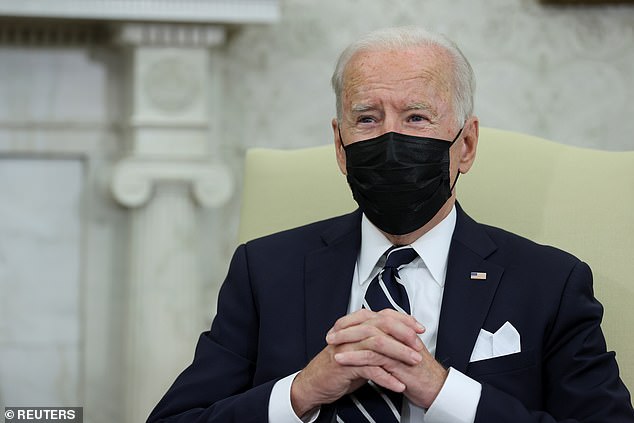 Earlier President Biden said U.S. troops would continue with their ‘dangerous’ but ‘worthy’ mission to evacuate people from Afghanistan 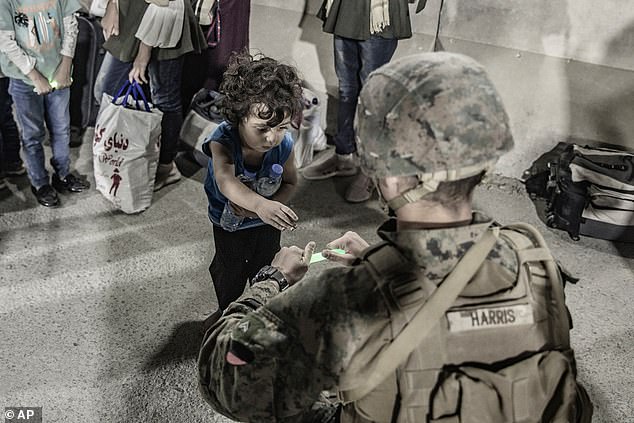 U.S. Marine with the 24th Marine Expeditionary Unit (MEU) gives a child a chemical light to play with during an evacuation at Hamid Karzai International Airport in Kabul, Afghanistan 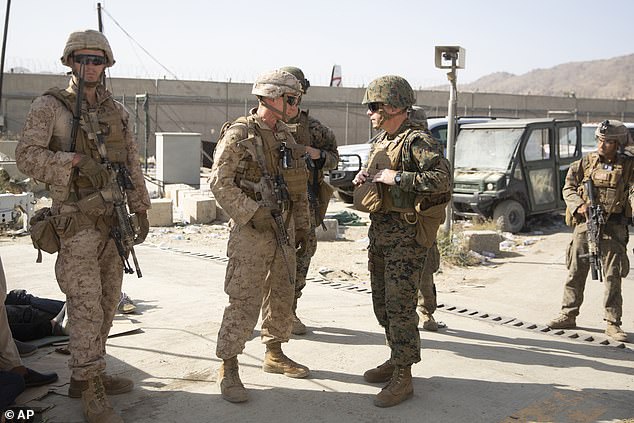 U.S. Marines are providing security at Hamid Karzai International Airport as evacuation flights carry thousands of people to safety. On Friday the White House said 12,500 people were rescued in the previous 24 hours

The Taliban would have to be part of that conversation, she added.

‘In order to continue to evacuate any American citizen who was not yet prepared to leave, who wants to leave, third country nationals, and Afghans with visas we will need to coordinate with the Taliban,’ she said.

Time is running out for that diplomatic push.

The Taliban have made clear they will not tolerate American forces staying a day past the end of the month and Biden has so far said he will abide by his own deadline.

That has meant Afghans who worked with the U.S. military, government soldiers and other vulnerable people thronged the airport, despite the risk, in recent days.

The White House said another 12,500 people were rescued in the previous 24 hours, bringing the total to 105,000 since the day before the Taliban took over Kabul almost two weeks ago.

‘We’ve received confirmation within the last day more than 300 additional Americans were evacuated, she said.

‘Based on our outreach there are approximately 500 American citizens we are working with who want to leave.’

One of the first priorities will be to work out a way to keep the airport open.

But he said: ‘With the U.S. military set to depart by Aug. 31, I think that it is probably unreasonable to expect that there will be normal airport operations on Sept. 1.’

Turkey has offered to provide technical help to run the airport. But its demand to deploy troops to protect staff may not be acceptable to the Taliban.

Biden spent the morning with his national security team being briefed by commanders on the ground as they digested the impart of the huge suicide bombing in Kabul. 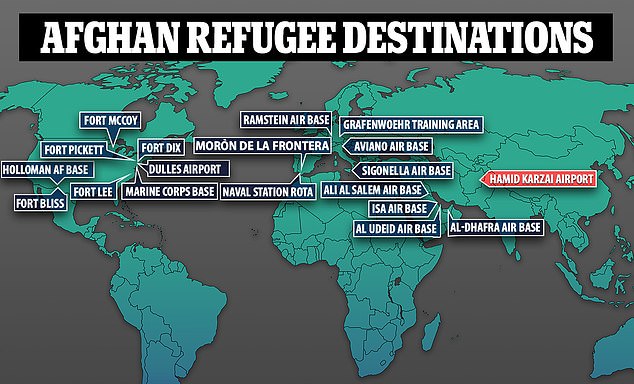 A map showing some of the locations Afghan refugees are being sent to including staging areas in Qatar, Bahrain and Germany, as well as some of the 14 ‘temporary safe haven’ locations (according to Axios) and the US bases where they will stay 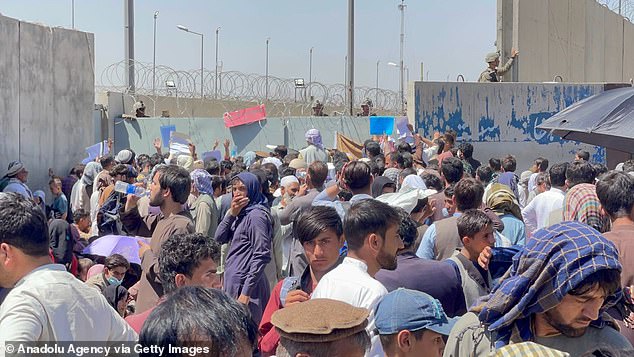 Until the blast, crowds of desperate Afghans and foreigners desperately tried to show their paperwork to US and NATO forces to be allowed through

He was told about their plans to go after ISIS-K, the Islamic State affiliate believed to be behind the attack.

And he was warned that another terror attack was likely.

‘The next few days of this mission will be the most dangerous period to date,’ said Psaki.

Marine Corps Base Quantico and Fort Pickett in Virginia, and Holloman Air Force Base in New Mexico were all added ‘to provide additional support to the U.S. mission to evacuate Afghans special immigrant visa applicants, their families, and other at-risk individuals,’ Kirby said.

Combined the bases will have capacity to house up to 70,000 Afghans and their families. Kirby said there are ‘just under 7,000’ people there as of Friday. 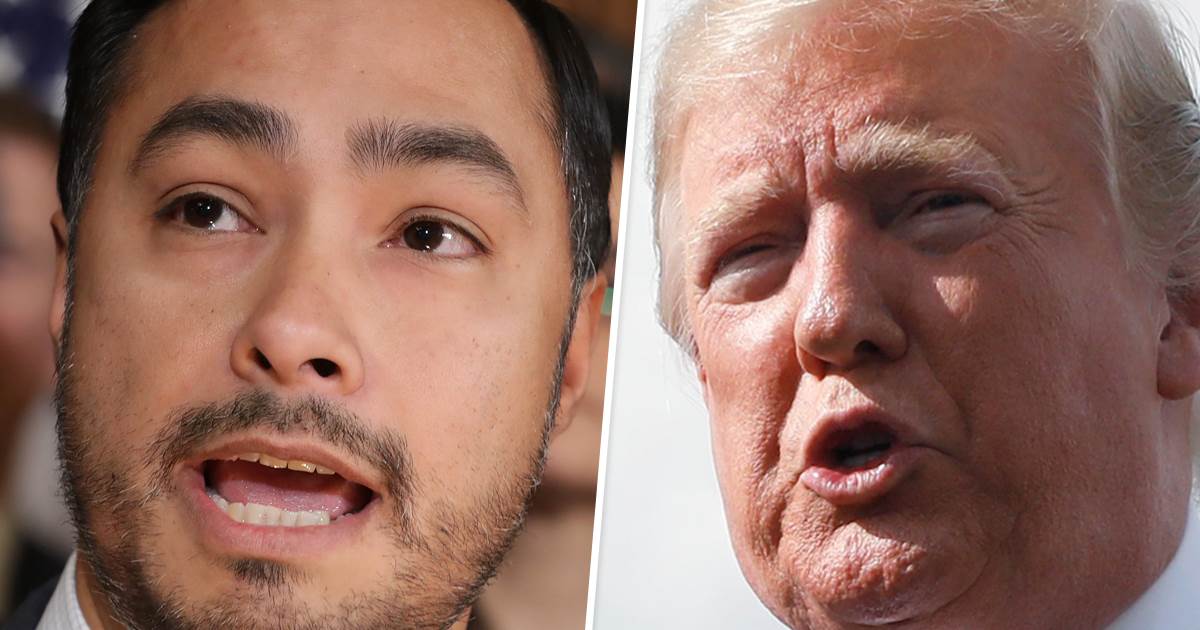 WASHINGTON — Texas Democratic Rep. Joaquin Castro is pushing back Tuesday on criticism of his recent tweet that listed the names and […] 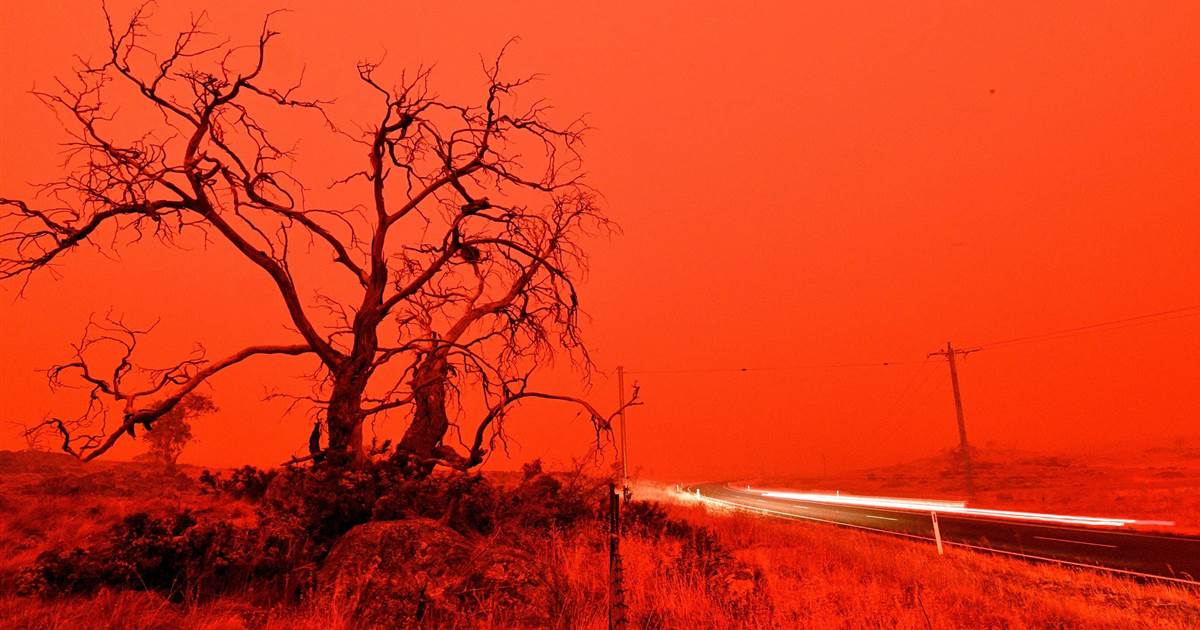 CANBERRA, Australia — Ken Thompson warned that a calamity was imminent, but those with the power to help did not listen. The […] 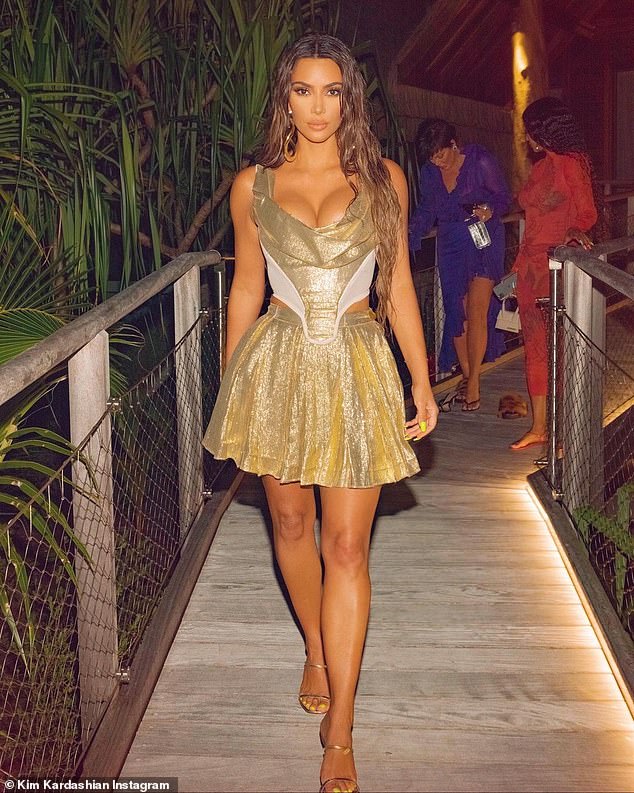 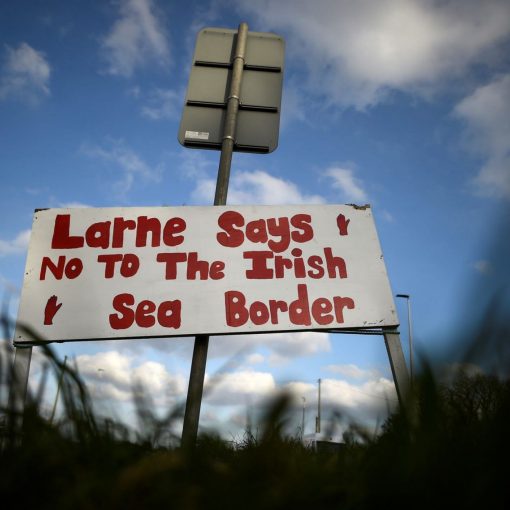