An intense search continued in Idaho for a five-year-old boy who went missing from a field behind his home nearly two weeks ago, with local authorities asking homeowners in the area to check their outbuildings and irrigation ditches.

Michael Vaughan, nickanamed ‘Monkey’ by his family, vanished from the area of South Arizona Avenue and Ninth Street in Fruitland, Idaho, between 6.30pm and 7.15pm on July 27.

Multiple law enforcement agencies, including the FBI, have been scouring the area in search of the missing five-year-old. Tuesday will mark two weeks from the time of his disappearance. 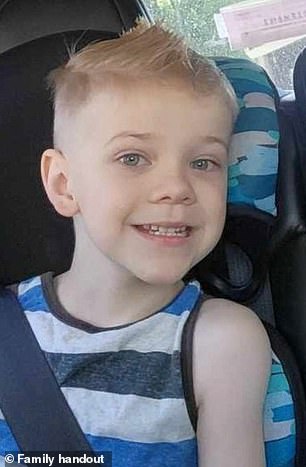 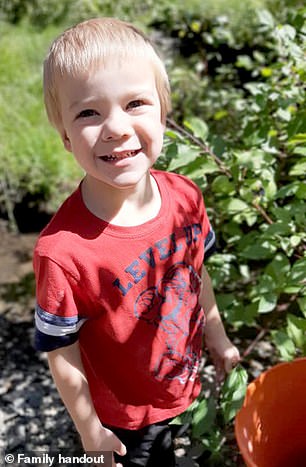 Have you seen Michael? Authorities in Fruitland, Idaho, are frantically searching for Michael Vaughan, 5, who went missing from a field near his home on July 27. Tuesday will mark two weeks since the boy’s disappearance 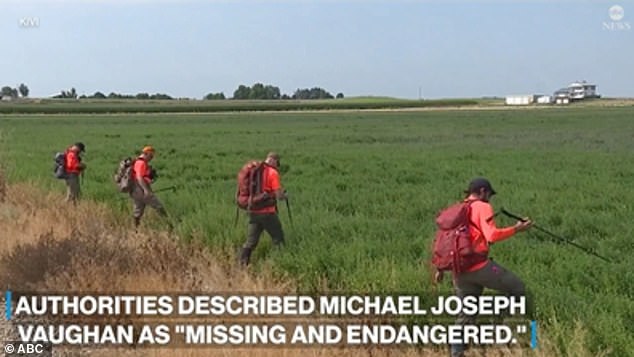 The FBI, Idaho State Police and other law enforcement agencies are also involved in the investigation

Fruitland Police Chief J.D. Huff said at a press conference last week that Michael’s parents, Brandi Neal and Tyler Vaughan, have been fully cooperative with the investigation, and urged members of the public to stop spreading rumors and innuendo about the case on social media.

Michael was in an open field adjacent to his home in Fruitland, about 50 miles west of Boise on the Oregon border, when he disappeared on the evening of July 27. It is unclear at this time what the five-year-old was doing in that location at the time, nor where his parents were.

Over the past 13 days, personnel from the Payette Police, Idaho State Police, Idaho Mountain Search and Rescue and the FBI have searched 3,000 acres of rural land and 29 miles of riverbank, drained two irrigation runoff ditches and reviewed security footage from the area, Huff said.

Officers from more than a dozen different law enforcement agencies have searched close to 200 homes, looked through garbage cans, drained a septic tank and interviewed everyone in the surrounding area. 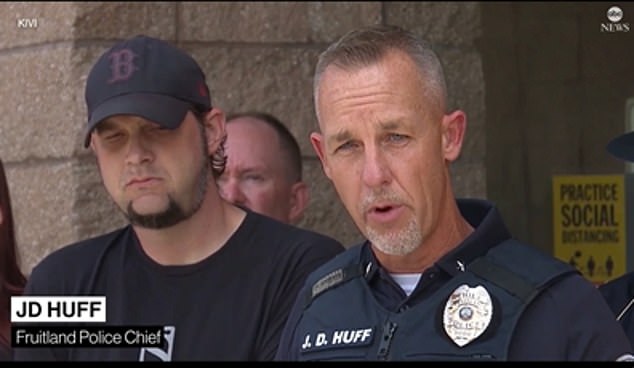 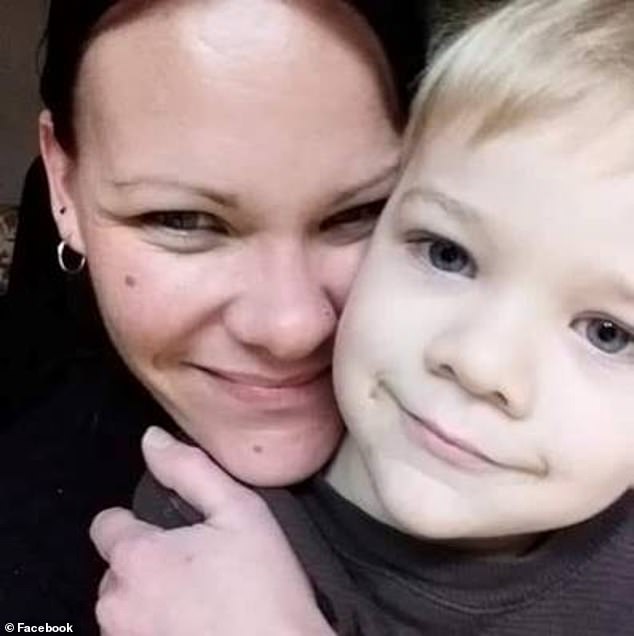 Michael’s mother, Brandi Neal, said: ‘Anyone who has any information, please contact the Fruitland police. We just want our Monkey home. We miss our baby and we want him home.’ 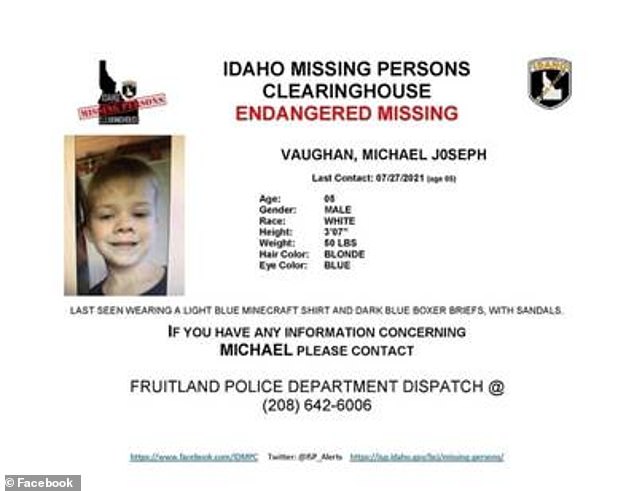 Witnesses are urged to come forward with any information, especially if they have been in the area of Southwest 9th Street and Arizona Avenue

K-9 dogs, divers, drones with infrared imagining capabilities, helicopters, paragliders and kayaks have been deployed in the search for the missing boy, reported Idaho Statesman.

During a press conference last week, Huff said a dive team searched a pond near the Vaughan family home, but to no avail.

No Amber Alert was issued for Michael because the police said they did not have any information to suggest that he had been kidnapped, and had no description of a suspect or a vehicle, reported KTVB. Instead, they sent out an endangered missing person alert.

Chief Huff appealed to homeowners residing near the area where Michael was last seen to inspect their properties, outbuildings and vehicles – any place where a child could hide or get stuck in – and review security footage.

‘Children move around and they wander. They may have traveled back into your yard without your knowledge,’ Huff said, encouraging anyone with information to come forward.

He added: ‘Maybe you are even afraid to reach out to us. We are here, we want to listen to what you have to say… Our goal is to find Michael and bring him home.’

During an earlier press conference last month, Neal, Michael’s mother made a personal appeal to the public to come forward with any information. 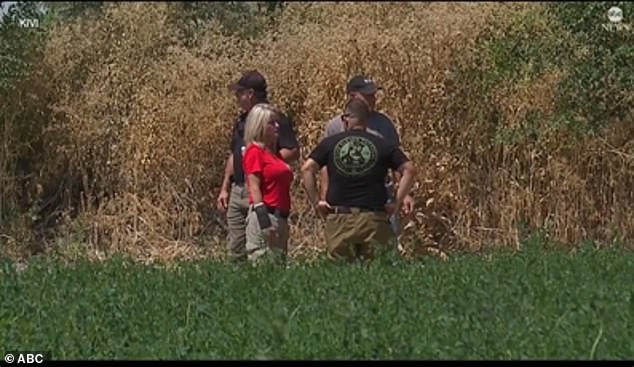 Two irrigation ditches were drained by the Fruitland Public Works Department and the search continued with K9’s as well as aerial, marine and land support 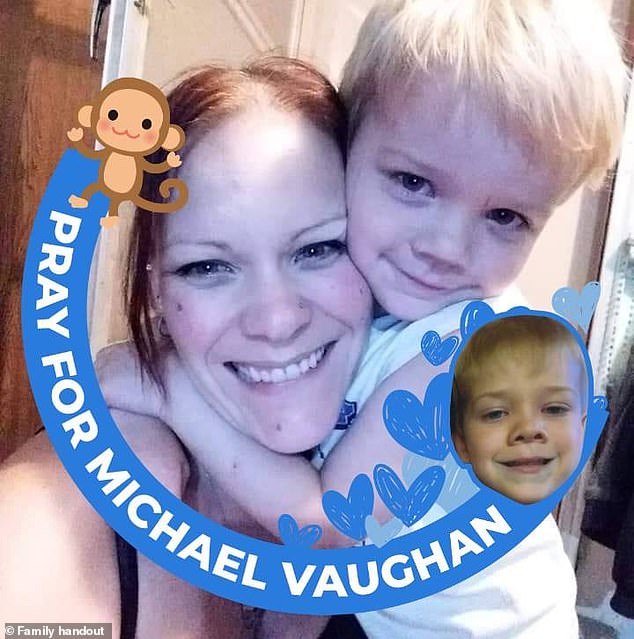 Neal, a mom-of-three, called the disappearance of her son, known to his family as ‘Monkey,’ an ‘unimaginable nightmare’

‘We just want our Monkey home. We miss our baby and we want him home,’ she said.

Neal, a mom-of-three, has been using social media to raise awareness of her son’s disappearance

‘This unimaginable nightmare is beyond words I can express!’ she wrote in a recent Facebook post. ‘Please, Please help bring our baby home! I will NOT STOP till he’s safe in our arms!’

Michael is 3 feet 7 inches tall and weighs about 50lbs, with blonde hair and blue eyes.

Anyone with information on Michael’s whereabouts is being asked to contact Fruitland Police at 208-642-6006. 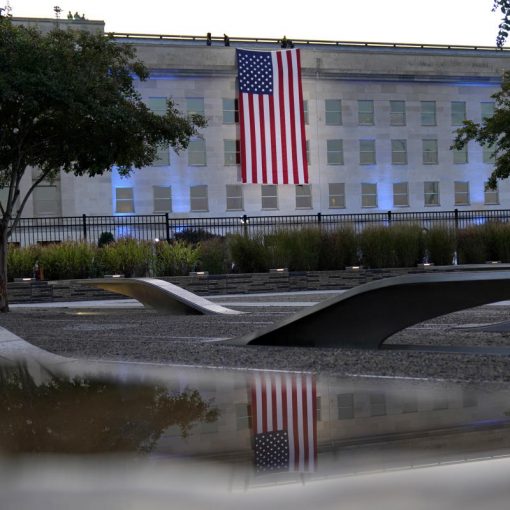 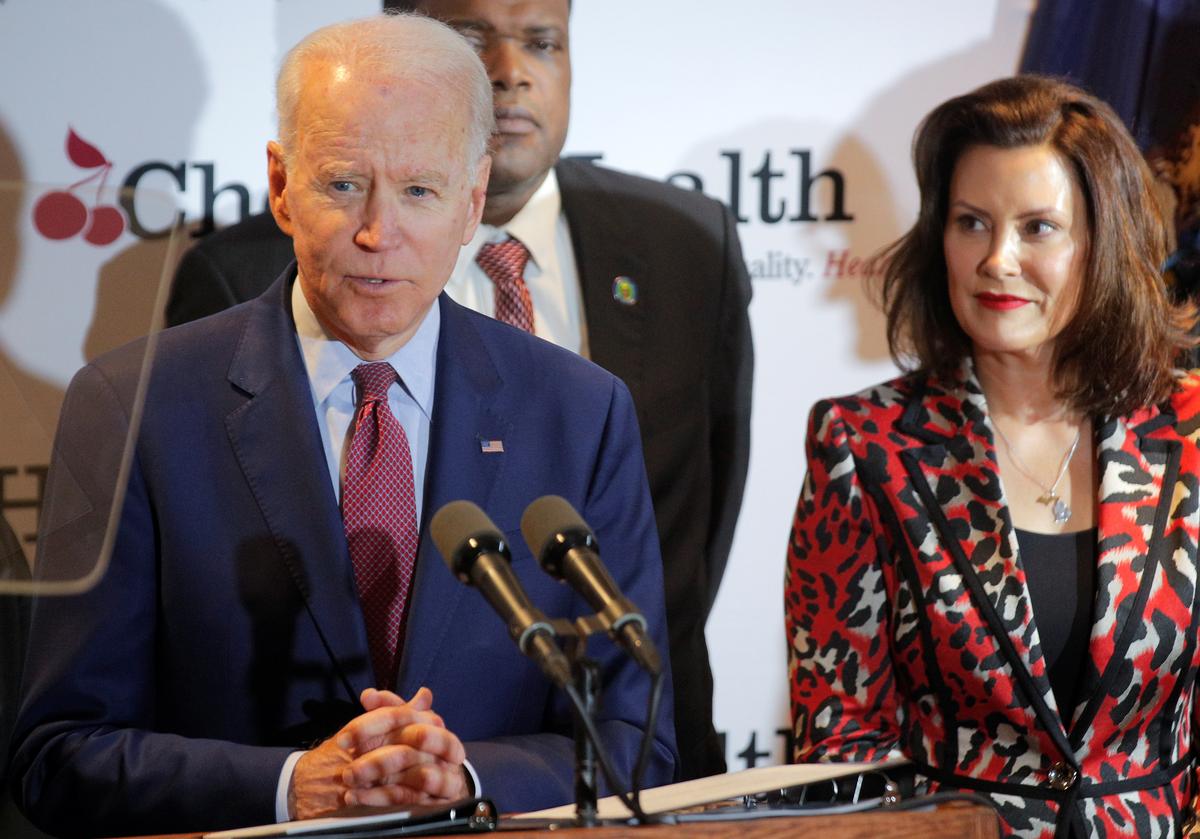 DETROIT (Reuters) – Seeking a decisive win in the Michigan primary, Joe Biden was joined onstage in Detroit on Monday by two […]

Once described as the world’s most powerful woman, Angela Merkel appears on her way out of politics. The Christian Democratic Party (CDP) […]