Two hundred members of the clergy and activists including Reverend Jesse Jackson were arrested on Monday during a protest at the U.S. Capitol.

The protest, organized by Poor People’s Campaign, was part of a series of events to demand improved voting access, an end to the filibuster, a $15 hourly minimum wage and protection for immigrants.

Speakers at the rally – that began in Washington DC in front of Union Station, and ended on the Capitol – included Lyndon B. Johnson’s daughter Luci Baines Johnson.  Her father signed the 1965 Voting Rights Act, which organizers say ‘has since been gutted.’

She told the rally: ‘The vote gave Americans of all backgrounds the opportunity to address the inequities of our country.

‘Those seeking to limit access to that vote will strangle liberty and justice for all.

‘I cannot speak for our father now, as I dared not in his lifetime. But I know for sure that he would want us to be with you in the fight for social justice and voting rights.’ 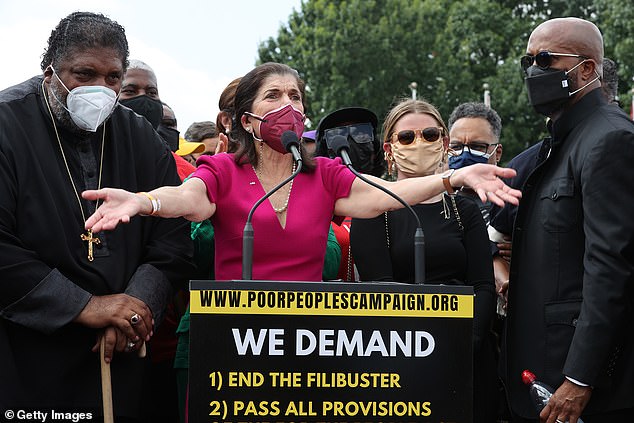 Lyndon B. Johnson’s daughter, Luci Baines Johnson, is seen on Monday addressing a rally in Washington DC. She told the crowd that her father – who in 1965 passed the Voting Rights Act – would have supported the march 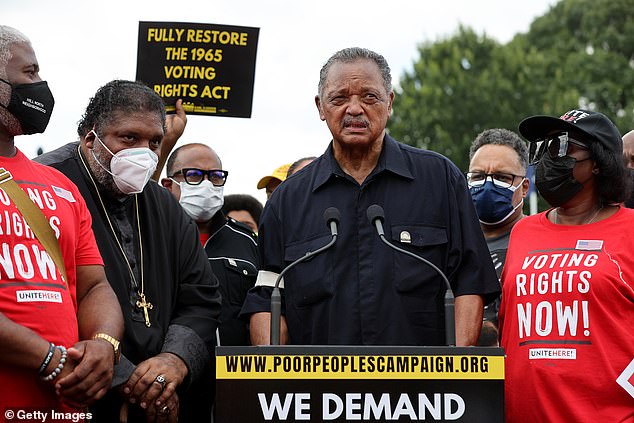 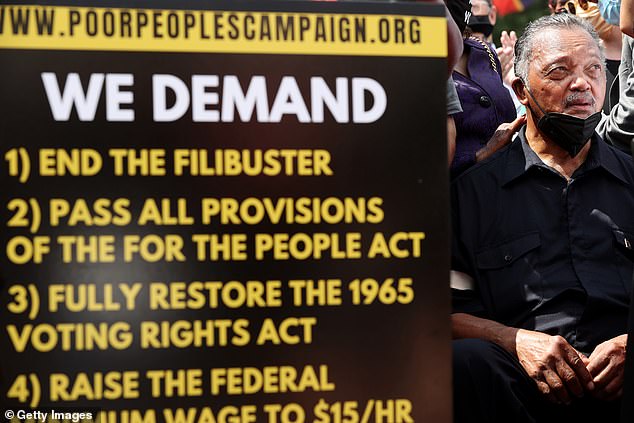 Jackson stands beside a sign outlining the campaigners’ demands. They want them to be passed by Congress before August 6 – the 56th anniversary of the Voting Rights Act 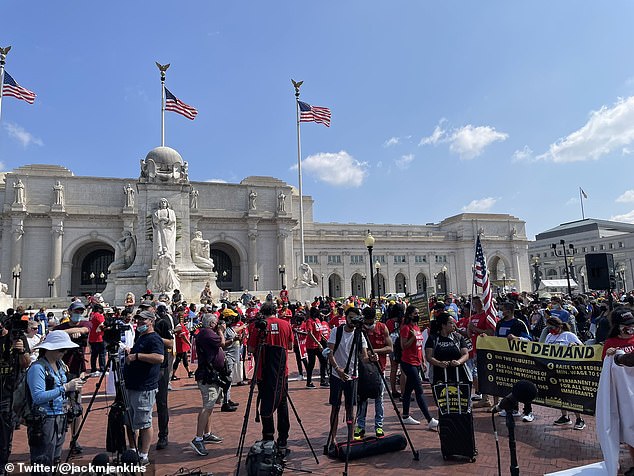 The group gathered in front of Union Station in Washington DC before marching through the city towards the U.S. Capitol 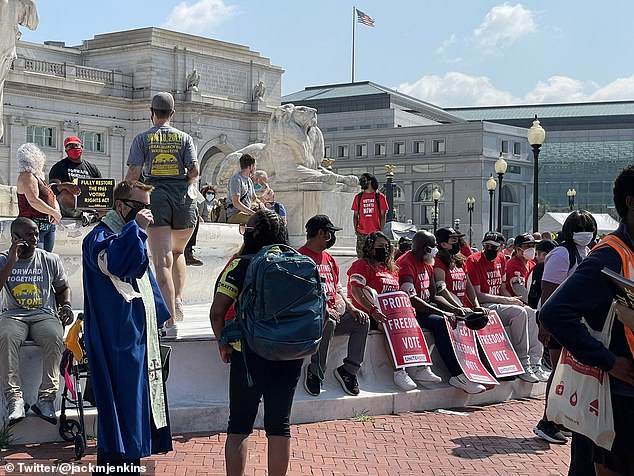 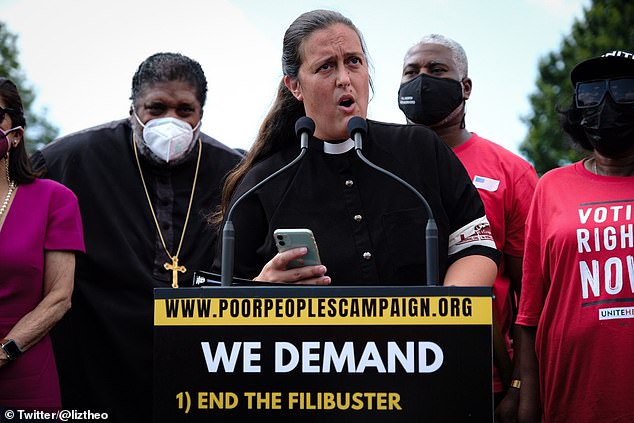 The group marched past the Capitol building and the U.S. Supreme Court, and were then denied entry to the Hart Senate Office Building.

Demanding to speak to the senior Republican in the Senate, Mitch McConnell, they also requested a meeting with Democratic senators Joe Manchin of West Virginia and Kyrsten Sinema of Arizona – both ‘swing’ senators who have spoken against ending the filibuster.

Jackson was arrested on July 26 along with Bishop Barber and 37 people others after refusing to leave the Sinema’s Phoenix office. He was also arrested on June 23 at a previous Poor People’s Campaign rally.

The activist are demanding that Congress approve their petitions by August 6 – the 56th anniversary of the Voting Rights Act.

Last week the group staged a four-day march from Georgetown, Texas, to Austin, Texas, ending on July 31 with a rally of thousands of faith leaders and low-wage workers at the state Capitol in Austin.

The protesters on Monday refused to leave the entrance area on the street, and Capitol Police then began arresting them for obstruction. 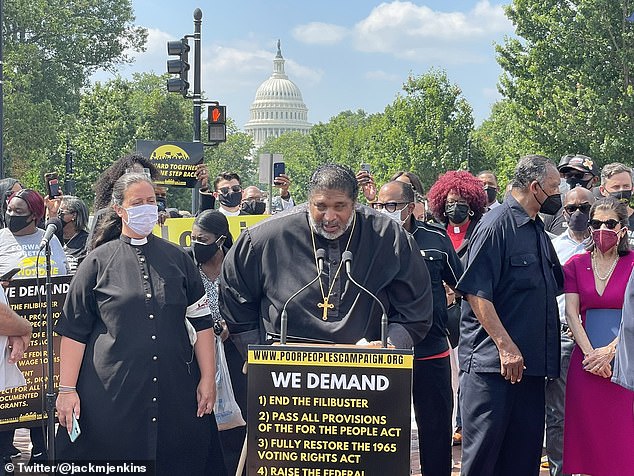 Bishop William J. Barber addresses the crowd ahead of the march on Monday

Cheers went up from the crowd as famed civil rights leader Jesse Jackson was arrested, and then Bishop William J. Barber and Reverend Dr Liz Theoharis, the co-founders of the organization.

Capitol Police set up tables in the shade to process one-by-one all of those arrested, including people in wheelchairs and elderly protesters with walkers.

Organizers and onlookers described it as one of the largest days of mass-arrest in recent memory, with Capitol Police confirming 204 detained. 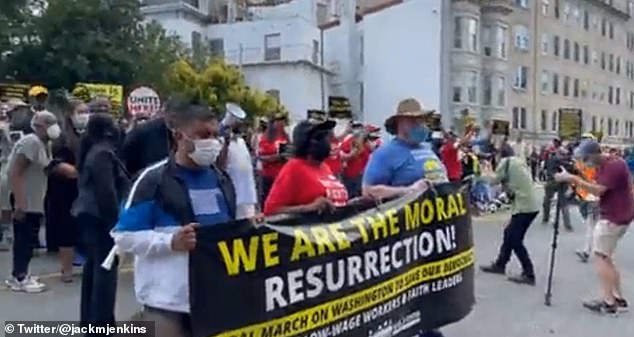 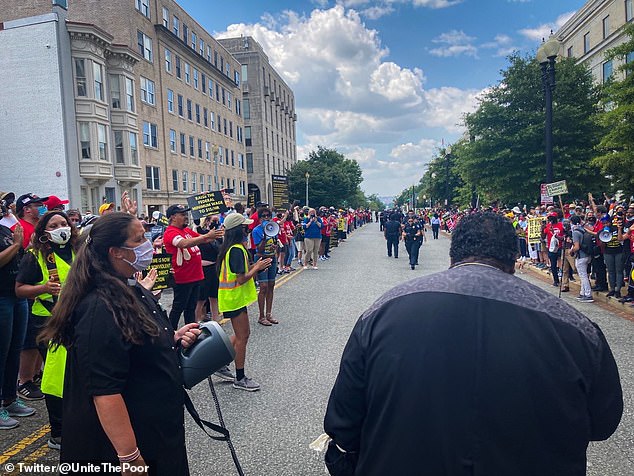 Protesters on Monday are seen lining up, as the police ready to make their arrests for obstruction

‘At approximately 1:30pm, the United States Capitol Police responded to the 100 block of Constitution Avenue, NE for a demonstration,’ a spokesman told DailyMail.com.

‘The protesters were arrested after they were given a third and final warning over a loud speaker to leave the street. 204 people were arrested for crowding, obstructing, or incommoding.’

Reverend Raphael Warnock, senator for Atlanta, attended the gathering but Jackson said Joe Biden should have been at the march.

‘If we lose, they lose,’ Jackson said.

‘If we lose, democracy loses.

‘If we lose, the nation loses credibility in the world.’ 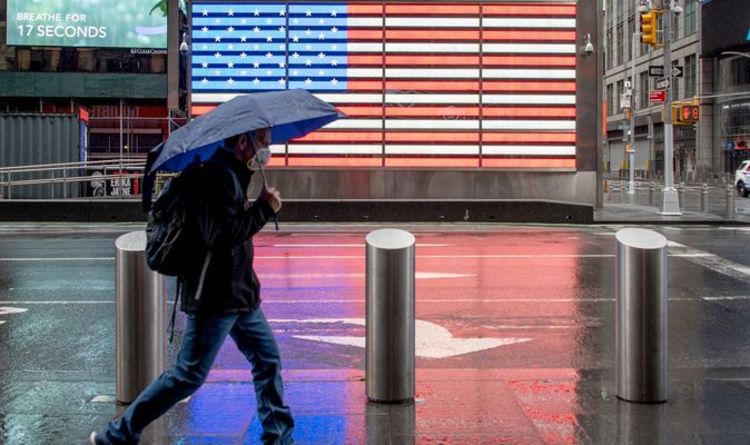 This week, the US reported over 2,000 daily deaths due to coronavirus for the first time since May, according to Johns Hopkins […] 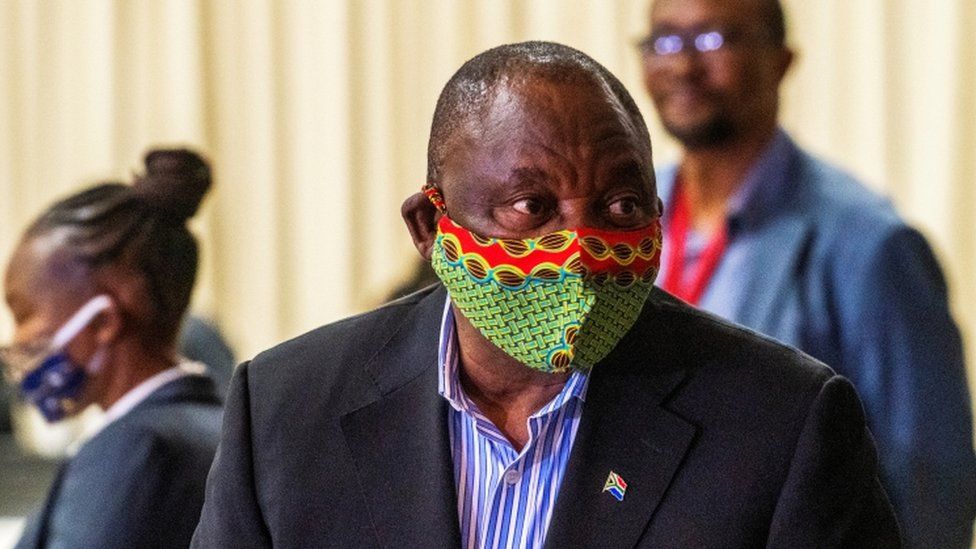 The former YouTuber continues his winning run after defeating former UFC welterweight champion Woodley (77-75, 75-77, 78-74). This was the most dangerous […] 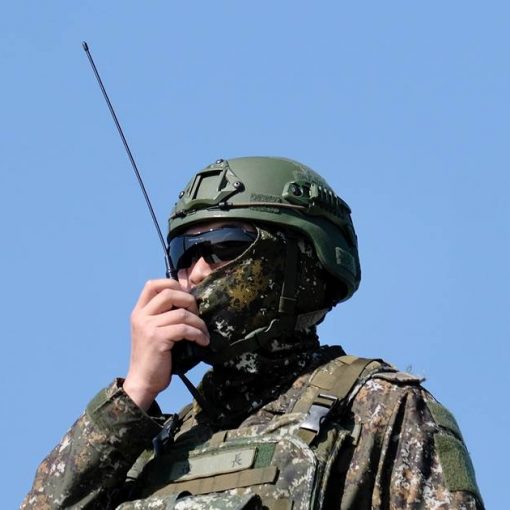 WASHINGTON — China is trying to wear down its neighbors with relentless pressure tactics designed to push its territorial claims, employing military […]