South African head honcho Rassie Erasmus launched into an extraordinary hour-long rant in which he savages World Rugby, their referees and said he might quit the final two matches of the series after his attack.

In an incredible video posted on the online platform Vimeo – curiously by an account called ‘JJ’, echoing his apparent Twitter alter-ego ‘Jaco Johan’ – Erasmus is seething, offering a step-by-step analysis of every bad decision he thinks was made in the first Test.

The Springbok director of rugby accuses the officials in the first Test of a lack of respect to his team, of not knowing their own laws, highlights 30 decisions he feels they got wrong and even says the Lions’ illegal scrummaging caused a neck injury to his prop Ox Nche. 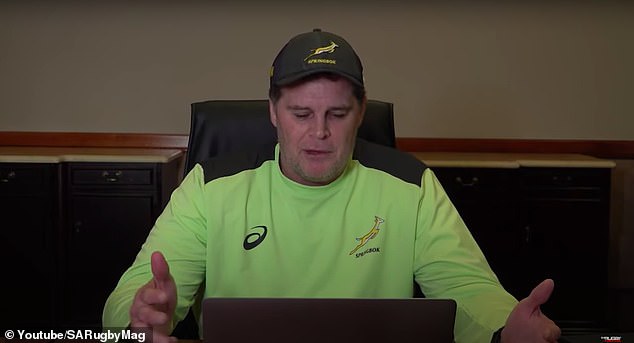 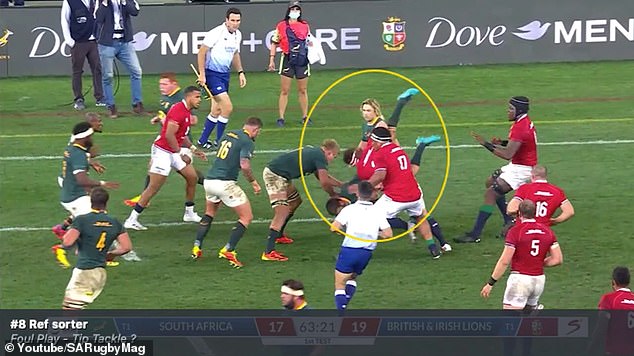 Throughout his analysis – laden with sarcasm and deep frustrations – he calls decisions ‘mind-baffling’, ‘silly’, ‘comical’, ‘incredible’ and that ‘consistency went out the window’.

And Erasmus offers to step aside for the last two Tests of the series.

‘If you guys request that I’m not involved in this Test match there’s no problem,’ he said, talking directly to World Rugby referee’s manager Joel Jutge.

‘If you request I’m not a water-carrier there’s no problem.

‘If you think this is going over the top and it shouldn’t go out to the media, then I did this in my personal capacity, not as part of the Springboks and I’ll withdraw myself from the Springbok management team.

‘It should be fair that I’ll step away from these last two Test matches but let the Springboks and the Lions have an equal chance on the field.’ 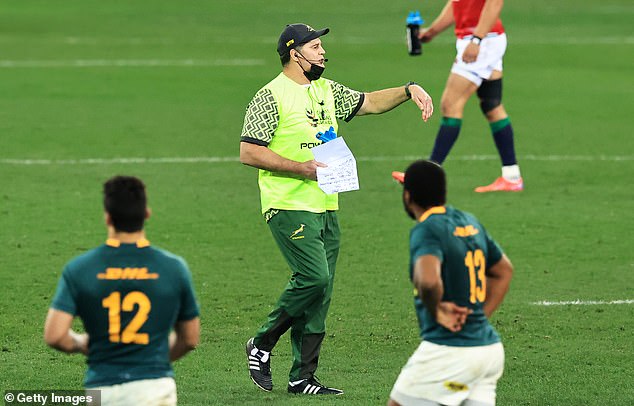 This is an attempt from Erasmus to turn the tide ahead of the second Test, changing what he believes is a narrative that South Africa are a dirty team – but one that will lose him lots of respect.

‘The narrative the Lions are trying to put out is that we don’t know the laws, we’re playing on power, and we don’t respect the laws of the game,’ he said.

‘We feel we got no joy with anything because we were quiet last week, and they were all over the media.’ 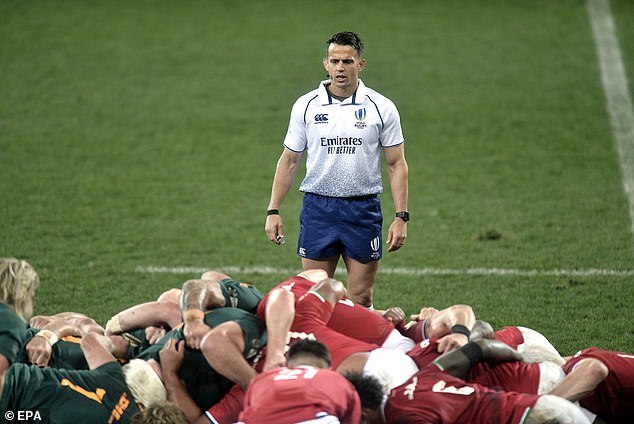 Erasmus also claims he filmed this video on Tuesday lunchtime as he had received no meaningful feedback from World Rugby on these decisions made in the first Test.

He said he called Jutge on Sunday, but the referee’s boss did not answer his phone – it going straight to a voicemail message in French.

‘I wouldn’t have had to do this is if he answered our call on Sunday night – nothing would have been on Twitter or all over the bloody media,’ he added, referring to a number of tweets he has shared from his personal account, and re-tweeting the strange ‘Jaco Johan’ account.

The decisions he painstakingly highlights are of every type – offsides, ruck, lineout, scrum, kicking, tackling and foul-play infringements – decrying a lack of consistency from Australian referee Nic Berry.

Forty minutes into the video, Erasmus sarcastically remarked: ‘I know you’ll say I’m nit-picking, but if you can apply the law the same right through the game, that will be great.’ 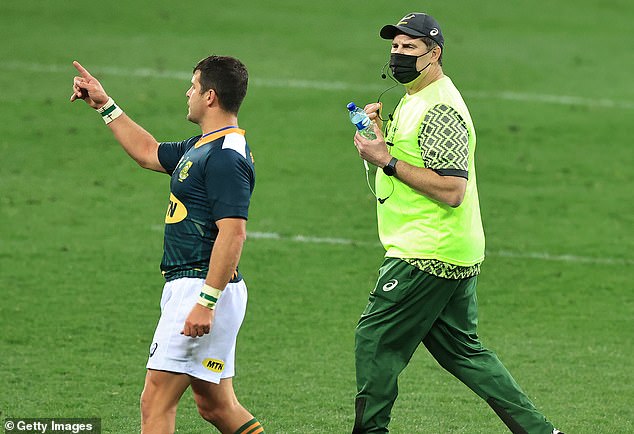 Erasmus has been centre stage, with myriad claims of injustice and a social media onslaught

And picking out an incident where Duhan van der Merwe appears to drive Makazole Mapimpi into the ground when clearing him out of a ruck Erasmus adds: ‘If that’s allowed just tell us, we would have loved to hear that on Sunday night, and we could have practiced that on Monday or Tuesday. According to me it’s very dangerous.’

Erasmus saves his most barbed comments for an incident he highlighted previously on Twitter – of Mako Vunipola picking Cheslin Kolbe off the ground when the wing is lying on the floor having been bundled into touch.

He believes that not only was Kolbe taken out in the air, he did not land straight into touch, as Berry decided, but that Vunipola could have caused him serious injury.

‘Vunipola pulls him up from the ground as if he’s a doll. If that’s a serious neck injury I don’t think he’d have all these quirky quotes in the newspapers,’ said Erasmus, referring to the England prop saying he did not believe his act was in any way ‘reckless’ as claimed by the Boks supremo.

‘Is that OK? If a Lions player lies on the ground injured on Saturday, can we just pull them up, and say ‘get up, you’re not injured’.’

Erasmus also claims that ‘the whole world’ knows Hamish Watson should have been sin-binned for a tip-tackle on Willie le Roux in the second half.

All in all, he is angry that his captain Siya Kolisi is treated differently by Berry and his assistants than Lions skipper Alun Wyn Jones.

‘It’s comical, the way the respect the assistant referees and the refs is different between the Lions and South Africa. There was a vast difference between who he was taking serious and who he wasn’t taking serious.’

World Rugby are now sure to act having been so publicly slated by the World Cup-winning Springbok coach. They have been contacted for comment. 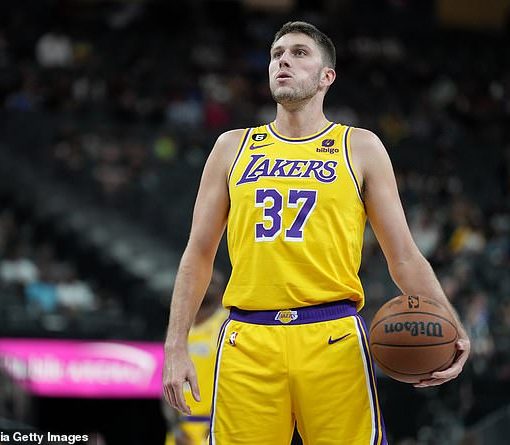 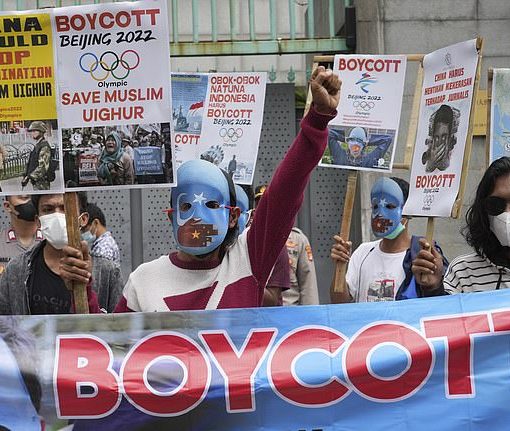 Rahima Mahmut is strong. Very strong. But she is also scared, which is why she wants her words to go to higher places […]

Kyle Larson has been suspended without pay by both Nascar and his team, Chip Ganassi Racing, after using a racial slur during […]