In truly bizarre scenes, Rudiger was caught on camera moving in towards Pogba’s back and then leaning his head forwards.

It then appeared that he tried to sink his teeth through the jersey, leaving his opponent visibly reeling and confused. 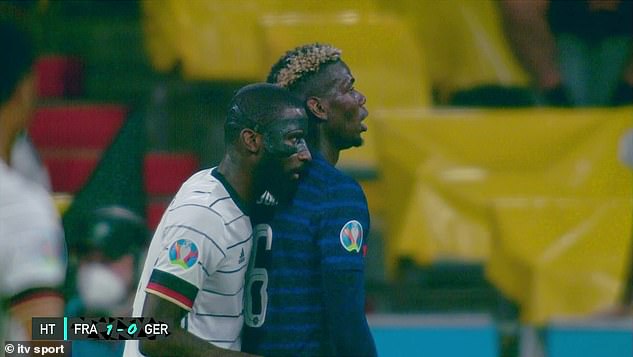 Pogba quickly complained to the referee, but with the incident largely going unnoticed until the half-time break, no action was taken.

After the game, Manchester United man Pogba insisted he does not want to see Rudiger punished for the bite.

‘He nibbled a little bit and I felt it so I told the ref,’ said Pogba. 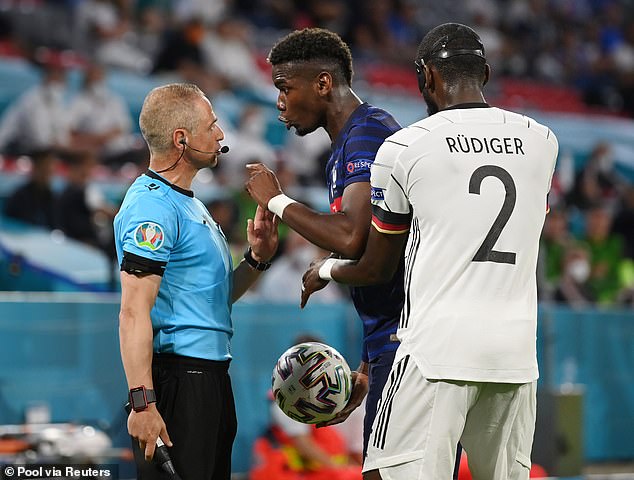 ‘But I am not crying for a yellow or a red card.

‘He has not received any card and I don’t want him suspended because of that situation. We hugged at the end and it’s over.’

No VAR review was held and the game was allowed to continue, leaving any potential repercussions uncertain.

Chelsea centre back Rudiger had been marking Pogba just before half-time in the heavyweight fixture in Munich. 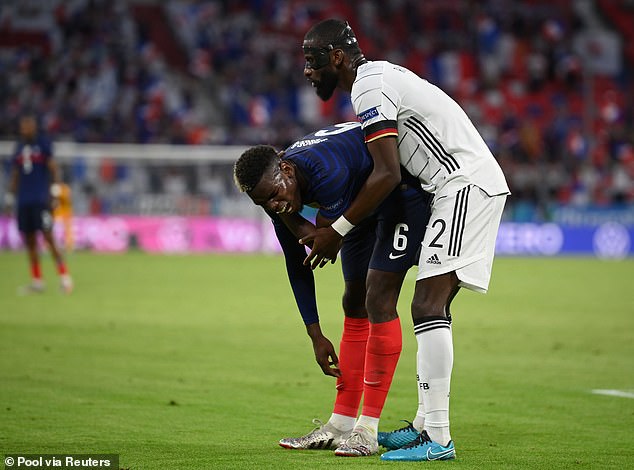 Pogba was seen to be in pain after the apparent bite, with Rudiger protesting his innocence

The midfielder’s reaction looked to be delayed, but he clearly pointed towards his shoulder blades when making the officials aware of the apparent bite.

UEFA may choose to look into the incident post-match, with severe punishments having been handed out for similar altercations in the past.

ITV’s punditry team of Patrick Vieira, Roy Keane and Ian Wright were left bemused by the alleged bite, but former Manchester United captain Keane labelled it ‘more of a nibble’.

Having re-watched the footage, Vieira said: ‘When you see Pogba’s reaction, it felt like a bite. I don’t really understand what he was trying to do there.’ 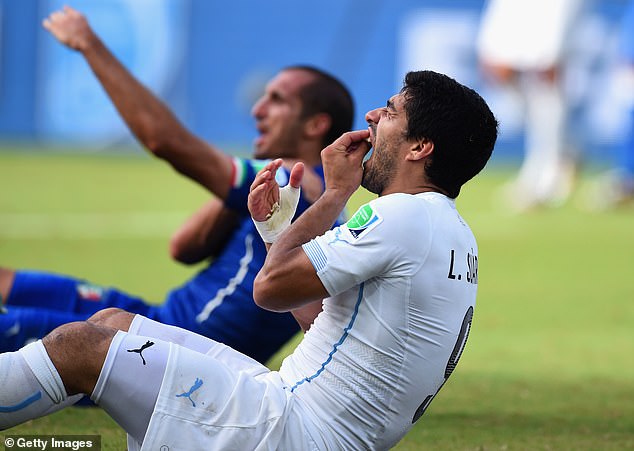 Luis Suarez has been punished for biting three times, including vs Italy at the 2014 World Cup

Keane then responded in turn by insisting: ‘I think it was more of a nibble than a bite. It’s a silly thing to do.’

Wright believes that the nature of Pogba’s reaction suggested that the bite may not have made contact at all.

‘If he’s bit him there, he’s going to flinch,’ Wright argued. ‘He’s not flinched at all.’ 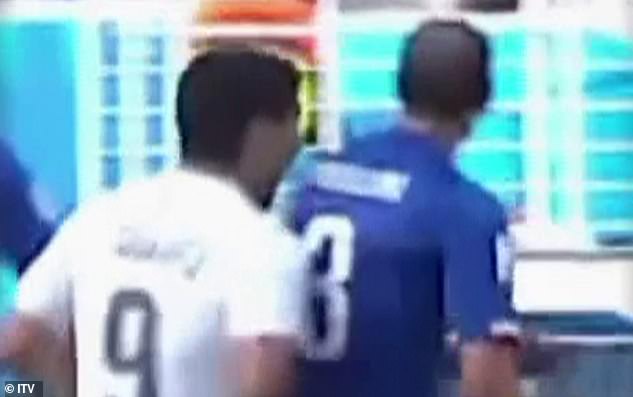 Suarez, now of Atletico Madrid, has been punished for the same offence on three separate occasions during his career.

The 34-year-old accepted a seven-match ban during his time at Ajax for biting PSV Eindhoven’s Otman Bakka in 2010.

He was also hit with a 10-game suspension for chomping down on Chelsea full-back Branislav Ivanovic three years later.

France, meanwhile, went on to take all three points from the clash with Germany in Group F. 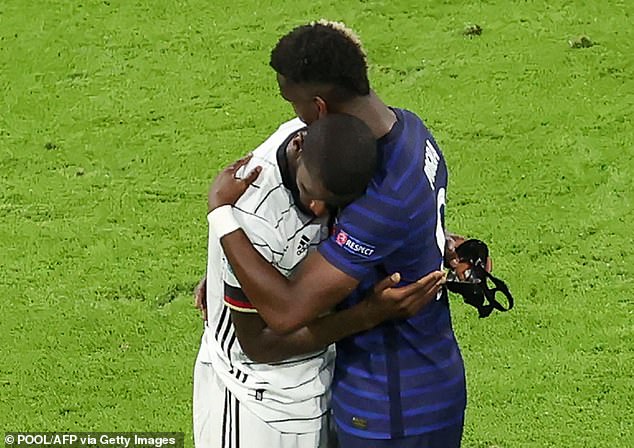 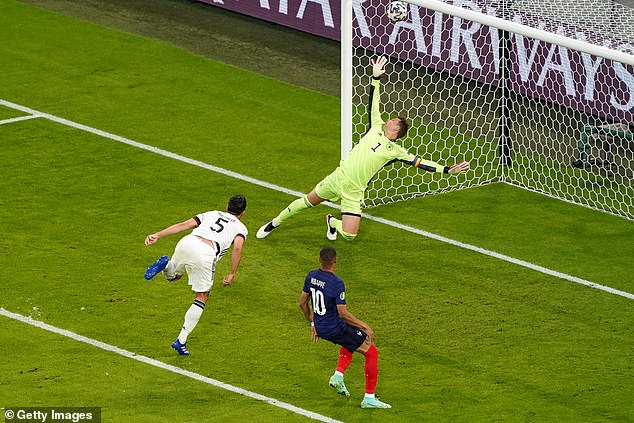 Mats Hummels horribly hooked a volley into his own net following a teasing cross for the opener, and Kylian Mbappe and Karim Benzema saw goals ruled out for offside.

Rudiger admitted before the game that his team may have to carry out the darker arts of the sport in their bid for a result.

‘We have to be a little dirty, not always be nice or try to play nice football,’ Rudiger said. ‘Against players like them, you have to throw down a marker.’

It appeared there was no bad blood between him and Pogba at full-time, with both players seen in conversation briefly before embracing. 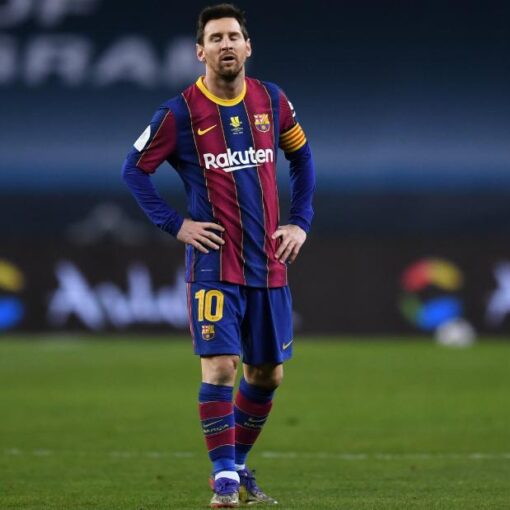 With his side twice squandering the lead over the course of the match, Messi’s frustrations boiled over in the game’s closing moments […] 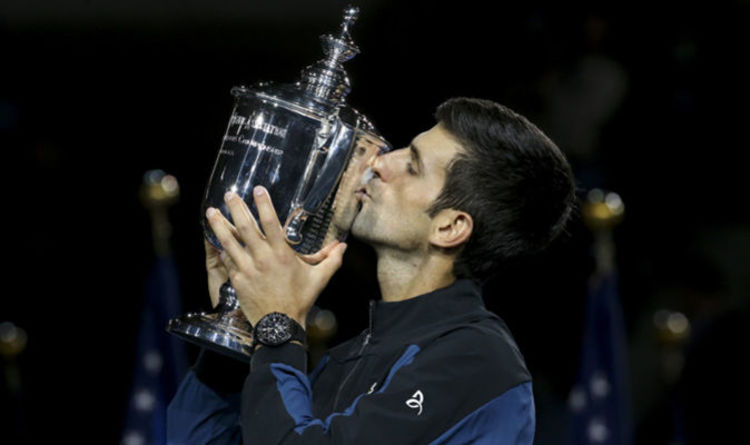 That is the opinion of Greg Rusedski. Djokovic earned his second Grand Slam win of the year after Wimbledon and the 14th […]

The former Spain and Real Madrid goalkeeper Iker Casillas has announced his retirement from football at the age of 39. Casillas, who […]