Researchers from Israel’s Ariel University examined fish bones dating back thousands of years, found at 30 archaeological sites in the country, to uncover the dietary secrets.

The team found no evidence of people following rules banning the eating of fish species without scale or fin until the Roman era in the 6th century CE.

The findings shed fresh light on the origin of Old Testament dietary laws still observed by Jewish people today, that mythology and religious history suggest were first introduced by Moses in the 12th century BCE.

The Torah, including dietary rules around forbidden foods and slaughter practices, began to be written down during the Persian period of Judea in the 3rd century BCE.

A set of passages repeated twice forbids the eating of certain types of fish, but the origins and history of the seafood ban have not been explored in detail until now.

The Israeli team say their findings call for a rethink of assumptions that long-held traditions were the basis for the food laws outlined in the first five books of the Hebrew Bible, suggesting instead they were introduced when first written down.

Study author Dr Yonatan Adler told MailOnline that there is no archaeological evidence of Judeans following any of the dietary rules before the 3rd century BCE. 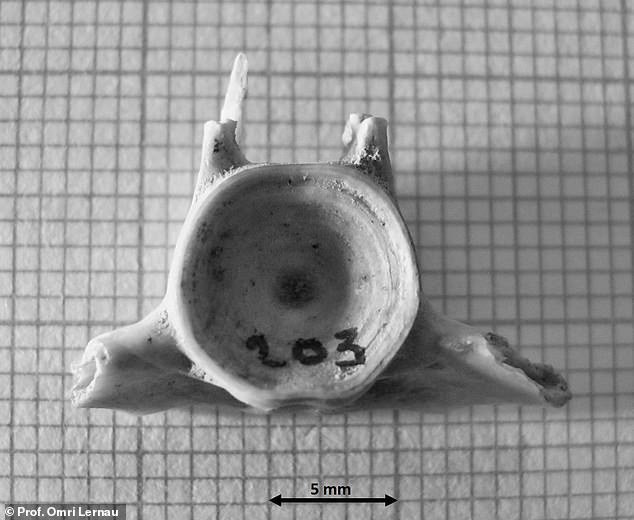 This is the anterior vertebra of a catfish excavated at Jerusalem used as part of a study into the eating habits of Iron age residents of Judea. It found they regularly eat non-Kosher fish like catfish despite it being ‘strictly forbidden’ under Jewish dietary laws 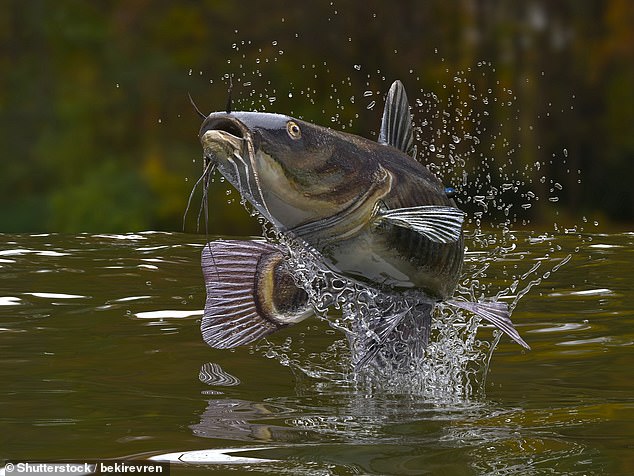 The team found no evidence of people following rules banning the eating of fish species without scale or fin until the Roman era in the 6th century CE. Pictured, a catfish (stock image)

What is a Kosher diet?

Kosher foods conform to the Kashrut, the Jewish dietary law.

These rules are primarily explained the books of Leviticus and Deuteronomy.

Land animals that both chew cud and have cloven hooves are allowed.

The hare, hyrax, camel and pig are specifically forbidden.

Birds of prey, fish-eating water birds and bats are forbidden but certain domesticated fowl including chicken, geese and turkey are allowed.

Only fish with fins and scales can be eaten such as haddock.

Clams, oysters, crabs and shrimp are all forbidden, as are mice and lizards.

Jewish people can’t eat the meat of animals ‘torn by beasts’ or that has died from natural causes.

This leads to a requirement that animals are slaughtered in a certain way to comply with the kashrut.

This process is called shechita and requires the severing of the wind pipe and food pipe, without touching the spinal cord.

It is done with the goal of causing a rapid drop in blood pressure in the brain and a loss of consciousness.

The study, published in the journal Tel Aviv, reports an analysis of ancient fish bones from 30 archaeological sites in Israel and Sinai.

These dig sites date to the more than 2,000-year span from the Late Bronze Age until the end of the Byzantine period stretching into the 5th century BCE.

‘The Biblical writers appear to have prohibited this food despite the fact that non-kosher fish were often found on the Judean menu,’ Adler added.

‘There is little reason to think that an old and widespread dietary taboo lay at the root of this ban’.

In both pages, the references immediately follow a ban on ‘unclean’ pig which has received wide attention.

Adler told MailOnline that the issue of pigs in the dietary rules has been widely covered, but very little attention has been paid to the origins of the ban on non-scaled and non-finned fish from the paragraphs just before the one on pigs being unclean.

He said that there is a ‘black spot’ in their archaeological evidence, mainly from during the Persian period of Judea, but up until that point there is no evidence of people following the sort of dietary rules laid out in the Torah.

This could suggest the rules were not widely adopted until then, or even that the rules had not been laid out until that point.

According to Jewish tradition and religious leaders, the Torah, including dietary rules were accepted by 1.2 million Jewish people in 1275 BCE in Sinai, nearly 300 years after the earliest evidence uncovered as part of this new archaeological study.

However, Dr Adler told me to ‘forget everything you learned in Sunday school,’ as this study purely explored the physical evidence, not religious history.

‘The physical evidence, from archaeological digs, shows that until the Roman period people in Judea were still eating non-kosher fish.’

The first fish bones uncovered by the Israeli team date back to the start of the Late Bronze Age, about 1,550 BCE, suggesting non-finned fish including catfish, sharks, rays, skates, moray eels and sturgeons were widely eaten at that time. 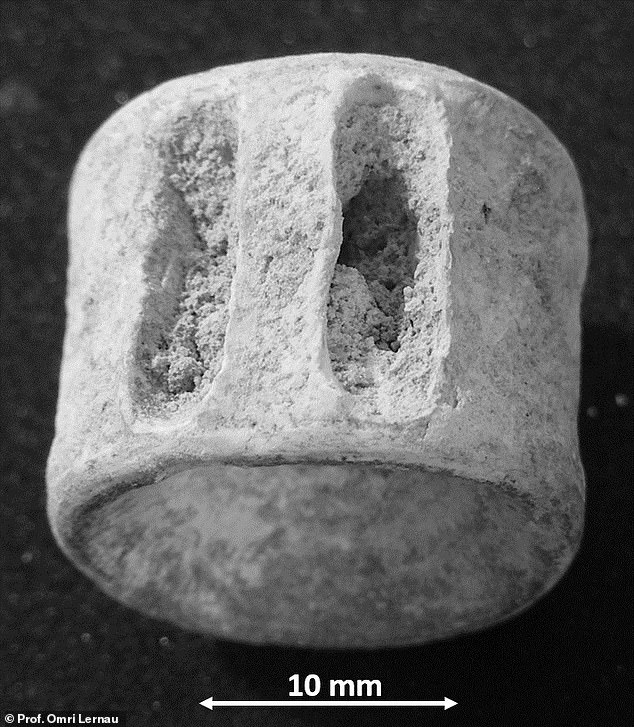 The centrum of shark was excavated in the Israeli city of Ashkelon. The study, published in the journal Tel Aviv, reports an analysis of ancient fish bones from 30 archaeological sites in Israel and Sinai

While this has long been thought to be the case, this is the earliest concrete evidence so far of the diet in the UK.

Scientists from the University of Bristol and Oxford Archaeology, excavated the 12th century toilet found in the ancient Oxford Jewish quarter around St Aldates.

During excavations, archaeologists found a stone-built structure, identified as a latrine, and dated to the late 11th and 12th century.

Inside the fragments from the latrine, as well as cooking pots from the attached house, scientists discovered evidence of kosher foods, including domestic fowl and herring, along with an absence of any pig bones.

Keeping kosher is one of the oldest known diets across the world and, for an observant Jew, maintaining these dietary laws is a fundamental part of everyday life.

In fact most of the fish bones uncovered by the team at the various dig sites were catfish, even as far as the 5th century BCE, when the lack of data begins.

Data begins to pick up again as the Roman era begins, when Judea was under Roman control – at this point people appeared to be following the kosher rules as the amount of catfish bones being discovered at sites from this era declined.

According to religious tradition the Torah was passed through down orally until the first scholars began to compile these thoughts in the 3rd century BCE.

Dr Adler said their work on non-Kosher fish is a tiny part of a much wider study tracking the physical history of Jewish tradition and religion – but through the food and life of the people, rather than leaders and scholars.

He said the origins and early history of the seafood ban have not been explored in detail by archaeologists or biblical scholars before this study.

The team set out to find when and how the ban first arose, and if it was predated by an earlier taboo practiced before the editing of the Old Testament passages.

They also sought to establish the extent to which the rule was obeyed.

Study co-author Professor Omri Lernau, of Haifa University, analysed thousands of fish remains from dozens of locations in Israel and Sinai, including Jerusalem.

At many Judean sites dating to the Iron Age, roughly between 1130 BCE and 586 BCE, including the Judean capital of Jerusalem, bones, including a ‘significant portion’ of non-kosher fish such as catfish, had been discovered.

This suggests that for a significant period after the Torah was said to be ‘widely accepted’ by religious scholars, fish without scale and fin were still being eaten.

Another key discovery was evidence of non-kosher fish consumption in Jerusalem during the Persian era from 539 BCE to 332 BCE. 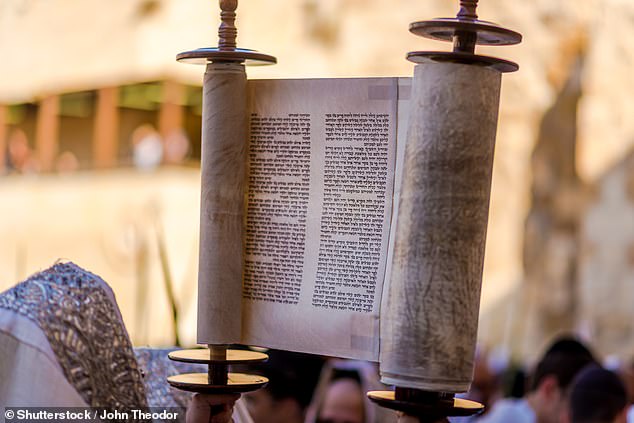 The Israeli team say their findings call for a rethink of assumptions that long-held traditions were the basis for the food laws outlined in the first five books of the Hebrew Bible, suggesting instead they were introduced when first written down

But non-kosher fish bones were mostly absent from Judean settlements dating to the Roman era and later, with a few examples discovered.

The researchers noted that sporadic non-kosher fish remains from the later time may indicate ‘some degree of non-observance among Judeans’ but that generally the Kosher rules were being more widely observed.

Now they intend to analyse more fish from around the same era to establish when Judeans began to avoid eating scaleless fish, and how strictly the ban was observed.

The findings have been published in the journal Tel Aviv and are part of a wider study called the Origins of Judaism Archaeological Project.

What are Halal and other religious animal slaughter practices? 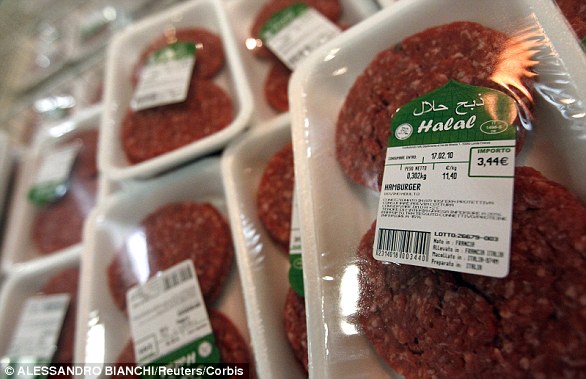 Under Islamic law, an animal must be slaughtered by having its throat cut while it is conscious

Halal slaughtering involves cutting through the large arteries in the neck with one swipe of a blade, while a Muslim butcher recites a religious verse.

All blood is then drained away since the consumption of blood is forbidden under Islamic law.

Under Islamic law, an animal must be slaughtered by having its throat cut while it is conscious.

According to the laws, in order for a meat to kosher it must come from an animal that meets the kosher rules.

These are the animal must be ruminant and have split hooves. Ruminant animals chew food once and swallow, before regurgitating it and chewing again.

Animals that Jews can eat include cows, sheep, goats and deer.

They cannot eat pigs despite the fact it has split hooves because it is not a ruminant animal.

Before slaughtering, the animal must be healthy and uninjured and a sharp knife is used to slice through the main arteries and windpipe, causing a drop in blood pressure that causes the animal to lose consciousness. Jews believe this is a way of killing that shows ‘respect and compassion’ as set out in Jewish law. 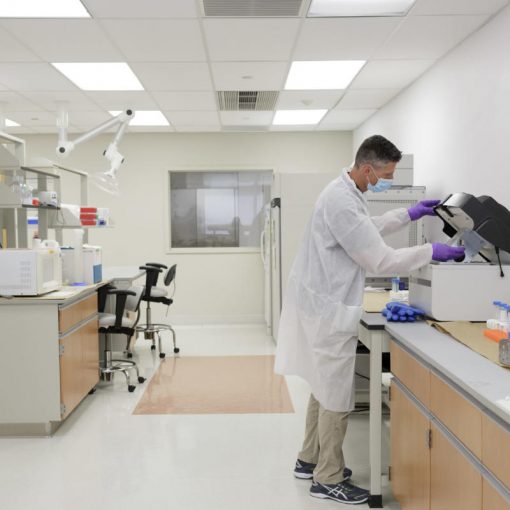 Carl Gajewski, a DNA lab supervisor, gives a demonstration on a “bone mill,” which crushes remains that can be used to extract […]

President Vladimir Putin met with officials from Gazprom, the state-owned Russian gas company, and ordered the company to send more gas into […] 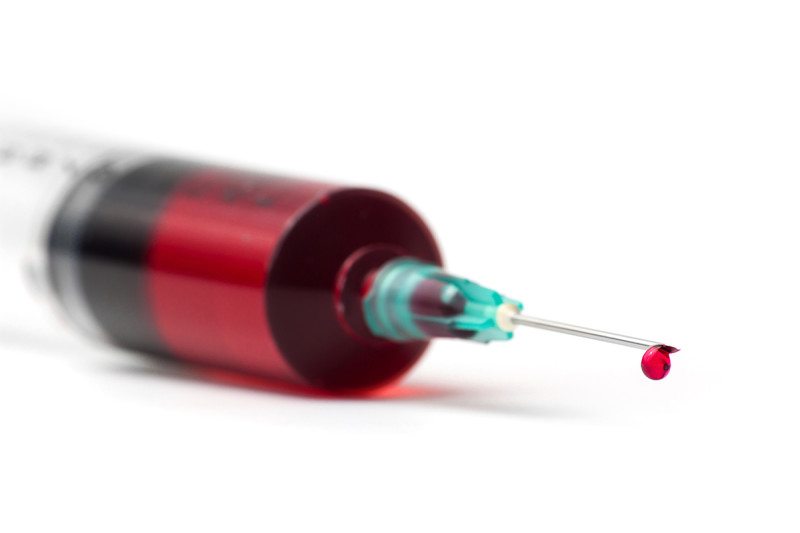 Is young blood the answer?Getty By Sally Adee The long-awaited results of a trial involving the injection of blood from young people […]

During a live webcast on Wednesday, NASA administrators unveiled the official name of the upcoming Mars 2020 Rover mission. Say hello to […]