Diego Simeone wasn’t watching the moment his fate fell back into his hands. After 35 exhausting weeks, every second of every game clawing at the nerves, the tension had become too much even for him. On Saturday afternoon, Atlético Madrid drew 0-0 at the Camp Nou; on Sunday night, Real Madrid faced Sevilla at Valdebebas, gifted the chance to go top for the first time in seven months, finally releasing Atlético’s grip on first place five months later, but he wasn’t going to tune in to see the title decided. When the drama unfolded, his destiny defined, he was having dinner. Or so he claimed.

“I haven’t been watching the other games; I have a bad time of it,” Atlético’s manager said before departing Catalonia bound for home, his team no longer in control of the tightest three-point title race there has ever been. “Nothing will change if I watch it. I’ll have dinner with my family instead. I prefer not to watch.” When the moment came, at 10.30pm the following night, others felt the same way, his Barcelona counterpart Ronald Koeman admitting that he turned over, but for the rest it was impossible to look away as the latest absurdly unlikely chapter played out, everyone watching a man watching a small screen.

This is the league that keeps on giving. And taking away. And then giving back again. The league? The leagues: if every time they said that a win, a loss, a save or a miss was “half a league” it actually was, there would have been hundreds of them handed out by now. It’s hard to keep up, all those deciding moments still not deciding anything, so many turning points you no longer know which way you’re facing but you do know it looks familiar, everyone living to fight another day right to the last of them, so close now. So far away, too.

Simeone called the title race “fantastic”, even if he wasn’t going to watch it; “Hitchcockian,” El País would say. Every week it seems there is some twist, some what if, but this week was another step again, everything getting a bit silly now. It had already been billed as the week that would decide everything, the four contenders facing each other – first against third, second against fourth – with just two points between the top three, six between all of them, and three matches left. Now a single second would decide it, or so it seemed.

There were 13 minutes and three more games left but to the couple of hundred people inside Valdebebas and the millions who were watching from home, it felt like the entire season had come down to his. One decision, one shot, the fate of four teams in the hands of a single man. It was 1-1 between Madrid and Sevilla and there were two penalties. One at Madrid’s end, one at Sevilla’s. In the middle, standing at the VAR screen, it was down to Juan Martínez Munuera to decide which to give, who he was going to hand the title too.

Éder Militão had jumped to clear a Sevilla corner and the ball hit his outstretched arm, one photo making him look like Hamlet lamenting Yorick’s death. Martínez Munuera hadn’t seen it and Madrid broke, Sevilla suddenly exposed. Vinícius wriggled free on the edge of the area and set Karim Benzema running, all alone. From halfway he headed into the area, where Yassine Bono brought him down. Running up behind him, Martínez Munuera pointed to the spot. From one end and one penalty to the other in 15 seconds.

Madrid had found a way again, the league in their own hands. But Martínez Munuera had his finger in an ear, the title on hold. Called to the VAR screen and signalling for players to stand back as if he was examining a suspect package, he watched alone and exposed, knowing that it was all on him now, damned if he did, damned if he didn’t. All around Valdebebas players and staff shouted, their lives on the line down there. Sergio Ramos’s voice boomed around, the two teams competing for the referee’s attention. It was a clear handball. It wasn’t a handball. There was something pantomime about it, the pressure building.

You Are The Ref, what do you do? A: panic. B: run away and hide. C: retire. D: restart with a drop-ball. In all, it took a minute. And what Martínez Munuera did was turn, draw a screen with his fingers and point to the right, to Madrid’s area. In all the noise, the pressure, the wait – from the second penalty given to the first penalty taken, four minutes passed – and in the face of Thibaut Courtois, a giant figure, arms stretched wide, Ivan Rakitic stayed calm, rolling the ball into the net.

“This penalty is going to bring with it terrible literature in the coming weeks,” Jorge Valdano said, but it wasn’t over yet. Six minutes were added. With the clock at 93.41, Toni Kroos hit a shot that took a deflection off Eden Hazard’s heel and went in. And then on 95.30, Casemiro bent a shot just past the post. At the full-time whistle, Zinedine Zidane pursued the referee for an explanation. Not far away, Luka Modric said: “Two points have escaped us today. We wanted to depend on ourselves.”

That opportunity gone, in the aftermath the significance of Kroos/Hazard’s goal momentarily went unnoticed, but it might yet be huge – a goal that took them back above Barcelona and means Atlético need only draw one of their final three games for the title to be back in Madrid’s hands. It also means the end of any small hope Sevilla had – a win would have left them one point behind Madrid, two behind Barcelona and four behind Atlético. “If we’d won, we would have been in there; now we have to be realistic,” Rakitic admitted.

Then the final two weeks, this Sunday and next, are:

Atlético: Osasuna (h), Valladolid (who may be fighting for survival, a).

Barcelona: Celta (a), Eibar (who may be down already but have given themselves a chance of fighting for survival, a).

Sevilla: Villarreal (a), Alavés (who may be safe by then, but might be fighting for survival, h).

“Anything can happen,” Barcelona defender Gerard Piqué said after Saturday’s draw with Atlético. In a normal season, he might not have said so but this isn’t a normal season. Every time you think it’s done, it’s not done. Somehow, they’re all still in there. Somehow, none of them step clear, like everyone’s running to stand still, turning points turning them back again.Everyone is on edge, the margins absurdly fine.

Witness Sevilla getting a 94th-minute equaliser – from their goalkeeper. Barcelona scoring a 90th-minute equaliser against Valladolid and watching a last-minute shot fly just over against Madrid, who in turn needed two in the final quarter of an hour against Osasuna, a 91st-minute winner against Elche and a 29-second turnaround in the derby. Atlético needing a last-minute penalty to hit the post to beat Elche, and another saved by Jan Oblak in the 85th minute to defeat Alavés. And all that in the last six weeks alone.

“All” Atlético need to do now is win three more games, but that’s not something they have done since January; it’s not something any of them are finding easy now, crawling to the finish line with their tongues out. Madrid have drawn three of five, Barcelona have won three of six, Sevilla have lost and drawn in a week. The more decisive it gets, the less decisive they have been, like no one wants to win this when in fact they’re all desperate to. And so here they are still, let off and let back in.

Sunday night was 14 days since Atlético’s fate first slipped out of their hands with an 86th-minute defeat at Athletic, 10 since Barcelona gave it back again by losing 2-1 at home to Granada and seven since Sevilla were caught by a last-minute Iñaki Williams goal, just when they might genuinely be contenders. It was one since Barcelona passed up the opportunity to move into a position from which Koeman said they would win the league and Atlético failed to step clear, handing control to the rivals both of them fear most. Now Madrid had passed up that opportunity but rescued a precious late point, still furious at the decision that denied them.

“That could cost us the league,” Marco Asensio said. “At least you’re smiling,” the touchline reporter said to Zidane at the end. “Yeah,” he replied, “but I’m very angry.” Julen Lopetegui insisted he was proud of his players. As for Koeman, the following morning he said he hadn’t seen it. “I watched the first 25 minutes, but then switched to Juventus-Milan because I get nervous watching the other teams,” he said, speaking for Simeone too. Around 600km away Atlético’s manager didn’t see how it happened but by the time it came to clear the table, his team was still top, where they have been for 23 weeks and where they will try to resist for three more.

French rugby chiefs have condemned the decision to cancel Saturday’s Champions Cup clash between Toulouse and Cardiff as “scandalous and totally unfounded”. […] 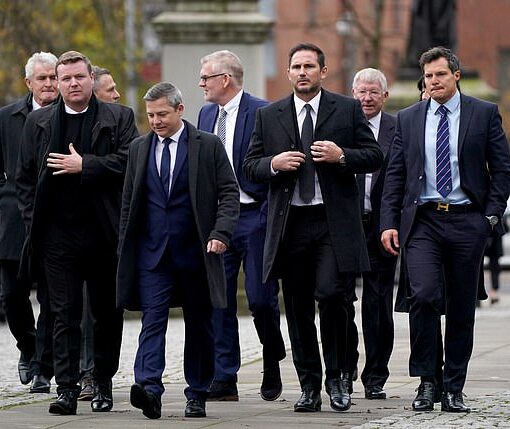 Good morning! These games they keep a-coming – today, round four, and all before the end of April. Lots of cracking matches […]