Protesters took to the streets of Elizabeth City on Monday night for the fifth night, as anger mounted at the failure to release the full footage showing the killing of Andrew Brown.

He was at the wheel of his car at the time; police have said they were carrying out an arrest warrant for drugs offenses, but his family have said he was ‘executed’.

On Monday night more than 200 people marched through downtown, carrying signs and shouting: ‘Release the tape! The real tape!’

Some reports suggested rocks were thrown, Fox News said, while others said it was eggs that were hurled.

Twice, The Raleigh News & Observer reported, they stopped to confront police officers who blocked traffic for them to pass, yelling: ‘Say his name! Say his name!’ before moving on.

Under North Carolina law, body camera footage can only be released with a court order, but critics are accusing the authorities of a cover up – suspicions that increased after the family were allowed to watch just 20 seconds of the fatal shooting on Monday. 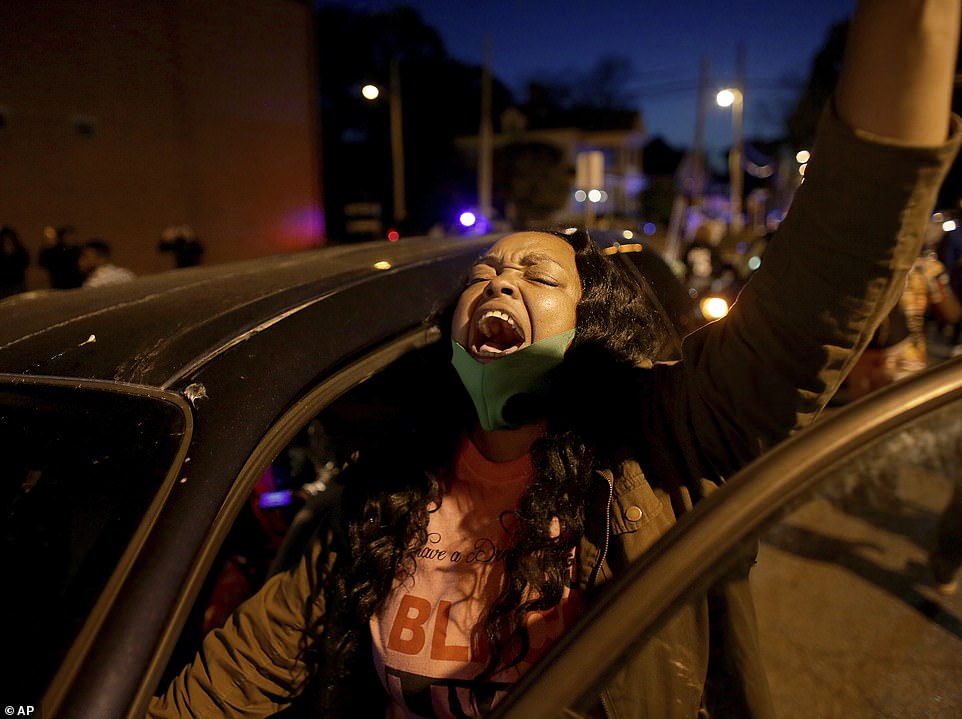 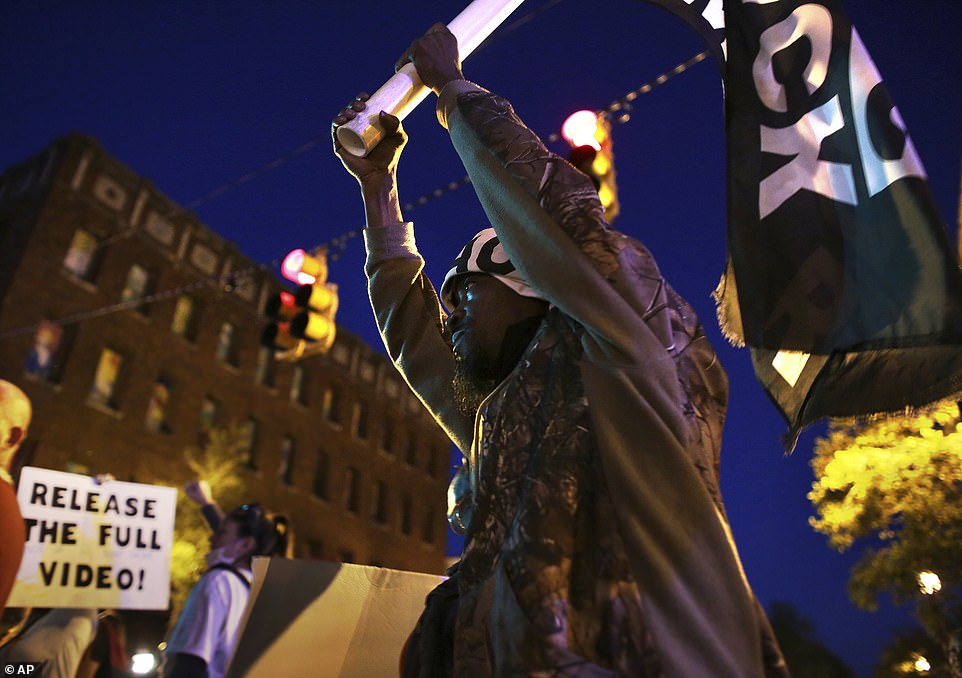 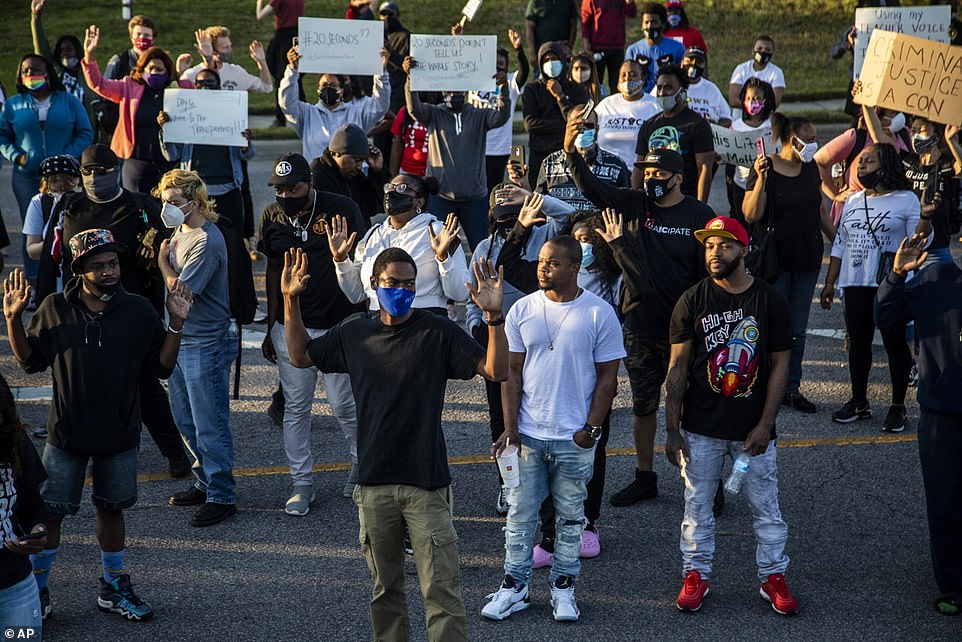 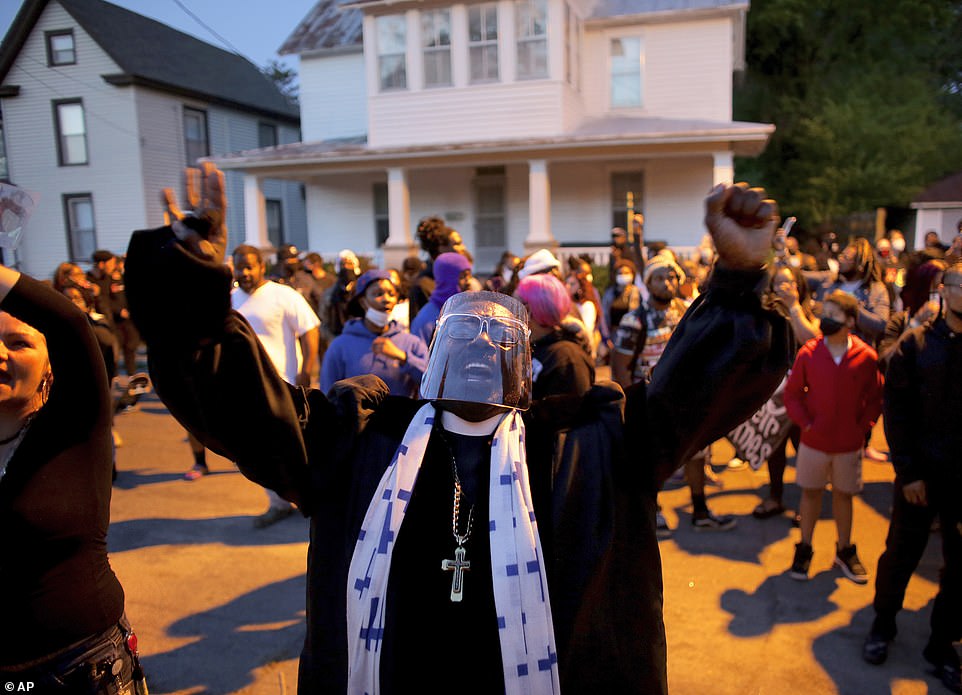 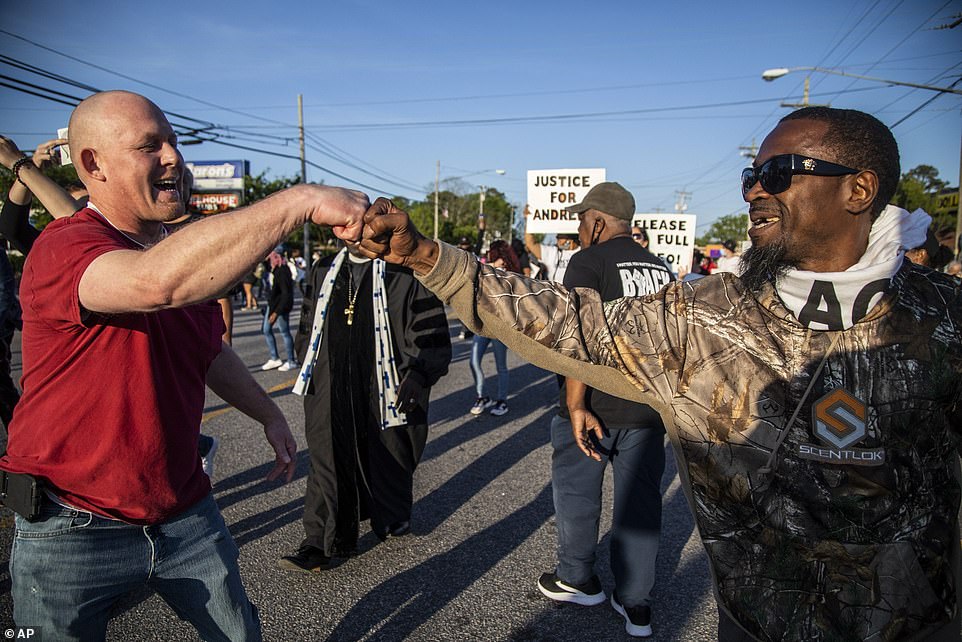 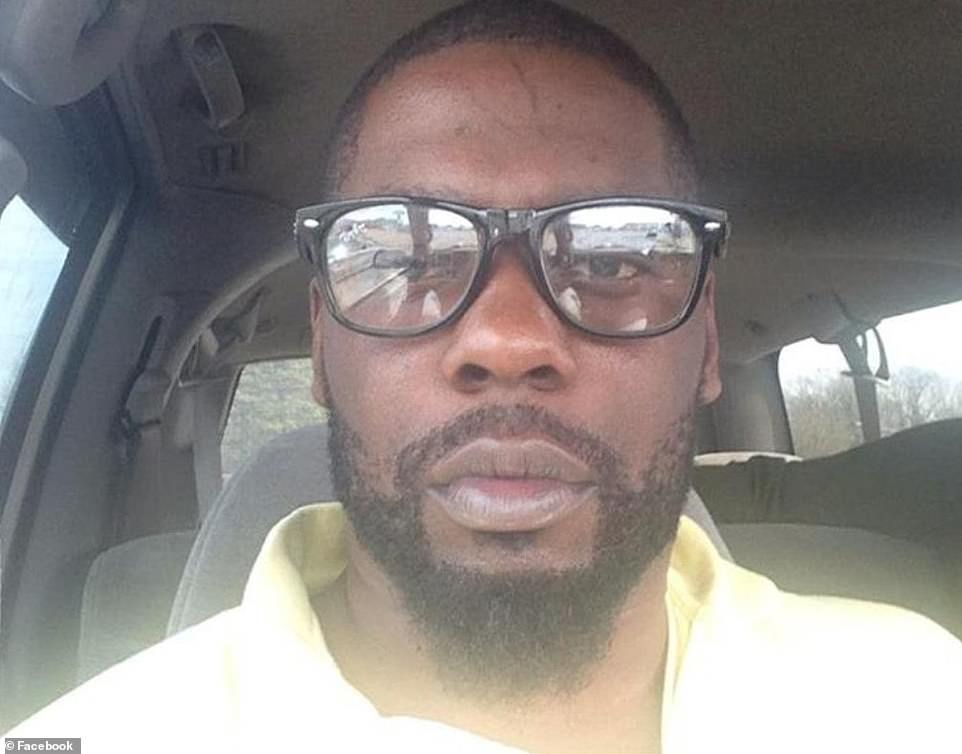 Ben Crump, the high-profile civil rights attorney who now represents the family, said outside the Pasquotank County Sheriff’s Office: ‘They are trying to hide something. They don’t want us to see.’

Attorneys for the family said he was shot in the back of his head and had his hands on the car steering wheel as up to eight officers fired at him. 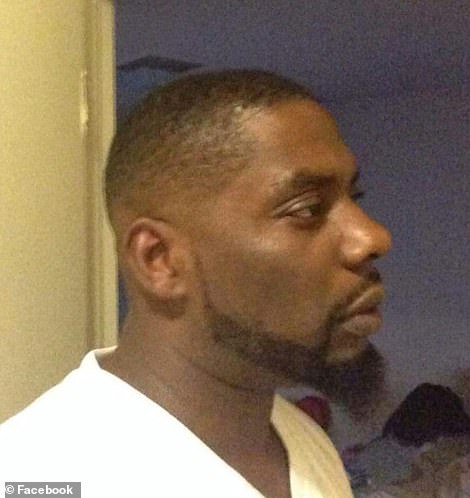 Andrew Brown, 42, was shot and killed by sheriffs in North Carolina on Wednesday morning

They said the clip they saw began as shots were already being fired, adding that Brown complied with officer commands throughout.

After watching the footage, Brown’s son Khalil told reporters: ‘My dad got executed just trying to save his life. It is messed up how this happened. He got executed.’

Court documents released on Monday show deputies obtained the search warrant that brought them to Brown after investigators recorded him selling small amounts of cocaine and methamphetamine to an informant.

Seven deputies have been placed on leave amid indications, including emergency scanner traffic and an eyewitness account, that Brown was shot in the back as he tried to drive away.

The city’s mayor earlier had declared a state of emergency over the shooting.

County officials indicated that showing family the clip had been delayed because they were working on blurring some faces in the recording. 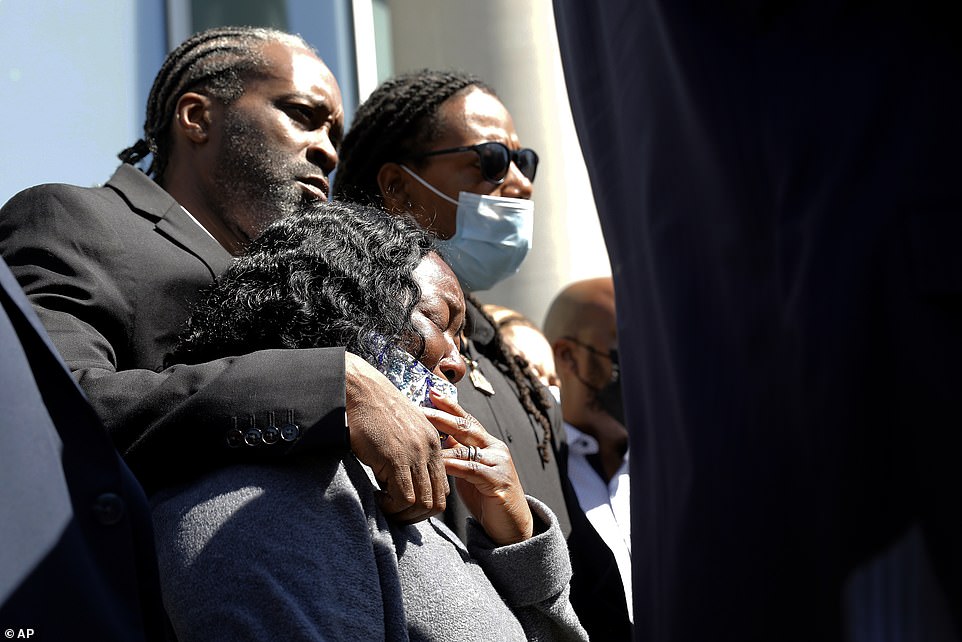 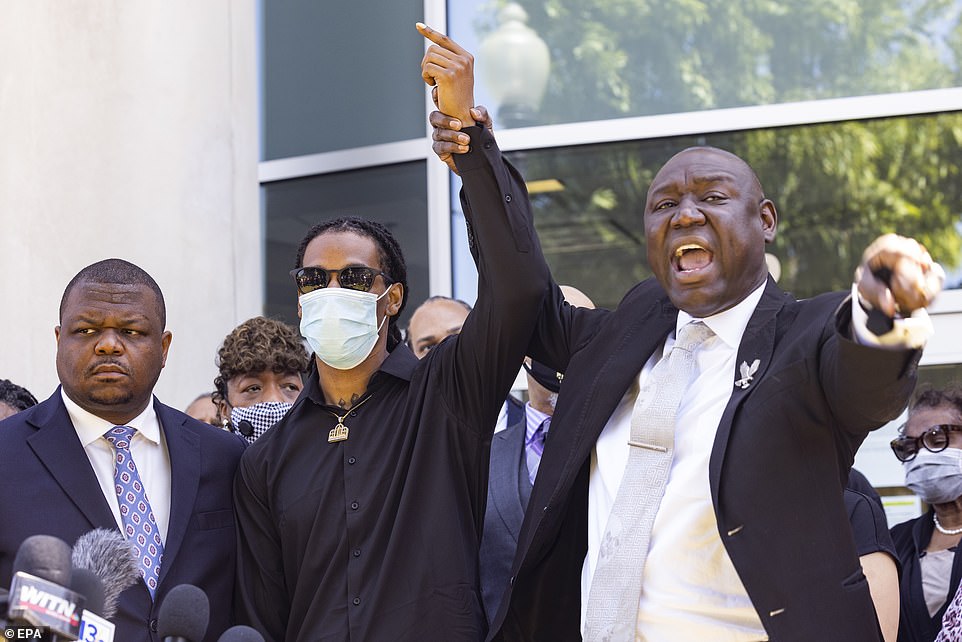 Attorney Ben Crump holds the arm of Khalil Brown, who called his dad’s death an execution 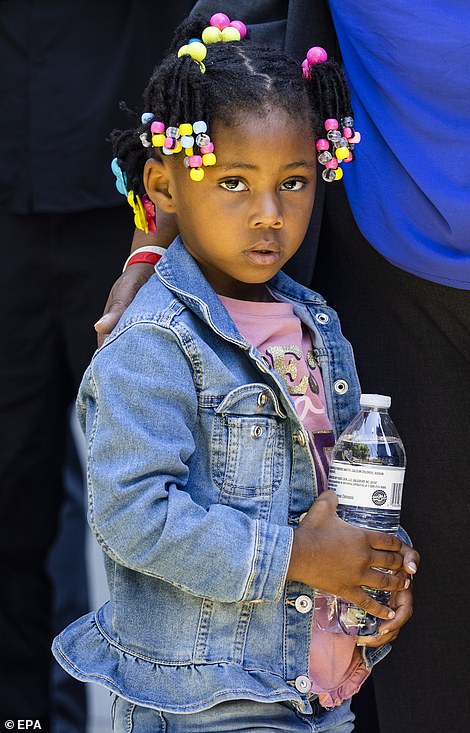 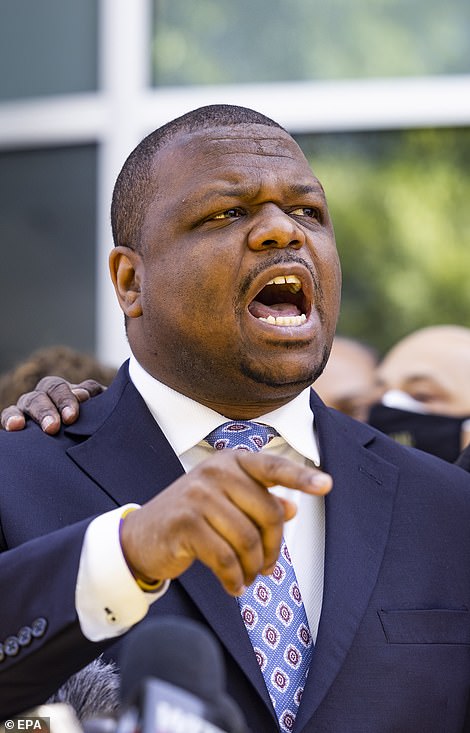 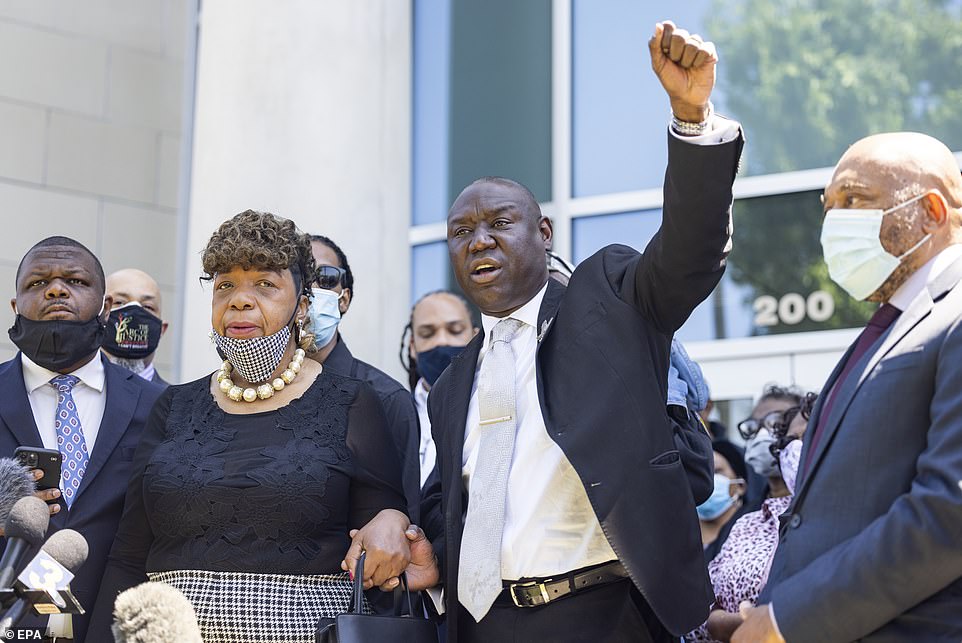 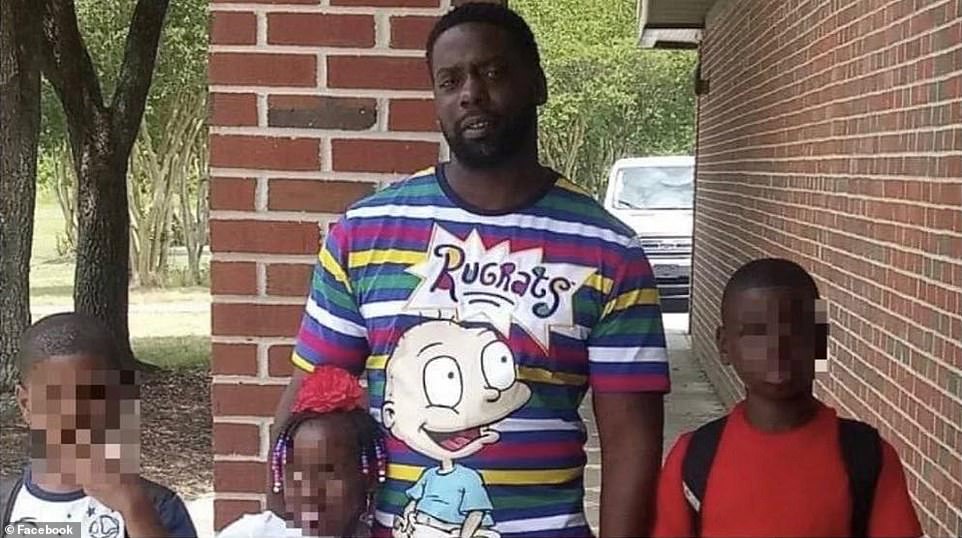 Brown, 42, father of 10 children, was shot and killed in his car at around 8.30am in Elizabeth City, North Carolina, while police were executing search-and-arrest warrants for drug offenses, officials said

Describing the footage in more detail on Monday afternoon, attorney Chantel Cherry-Lassiter said Brown had been in his driveway when he was blocked in by officers who were in a marked police vehicle.

She said they ‘lost count’ on how many shots were fired.

She also said deputies ‘rode up to his car while shooting’.

When Brown ‘finally tries to get away to get out of danger’ he backs out, away from officers who were allegedly shouting obscenities at him.

The attorney added: ‘At no time was he threatening officers.’

When his car runs into a tree, Cherry-Lassiter said the officers continued shooting at him, leaving his vehicle ‘riddled with bullets’.

The family noted that despite multiple officers being at the scene they were allowed to see just one clip – from an officer who was farthest from the scene.

Gunfire already had started in the clip they were shown, they said, and it was unclear what had happened in the moments before the shooting.

Cherry-Lassiter, who watched the video multiple times and took notes, said some deputies were wearing tactical uniforms and some in plainclothes.

‘They’re shooting and saying let me see your hands at the same time,’ she said.

Crump confirmed that he would hold a press conference on Tuesday at 11am to discuss autopsy results.

‘It’s clear to us there is something bad on that bodycam video,’ he said. 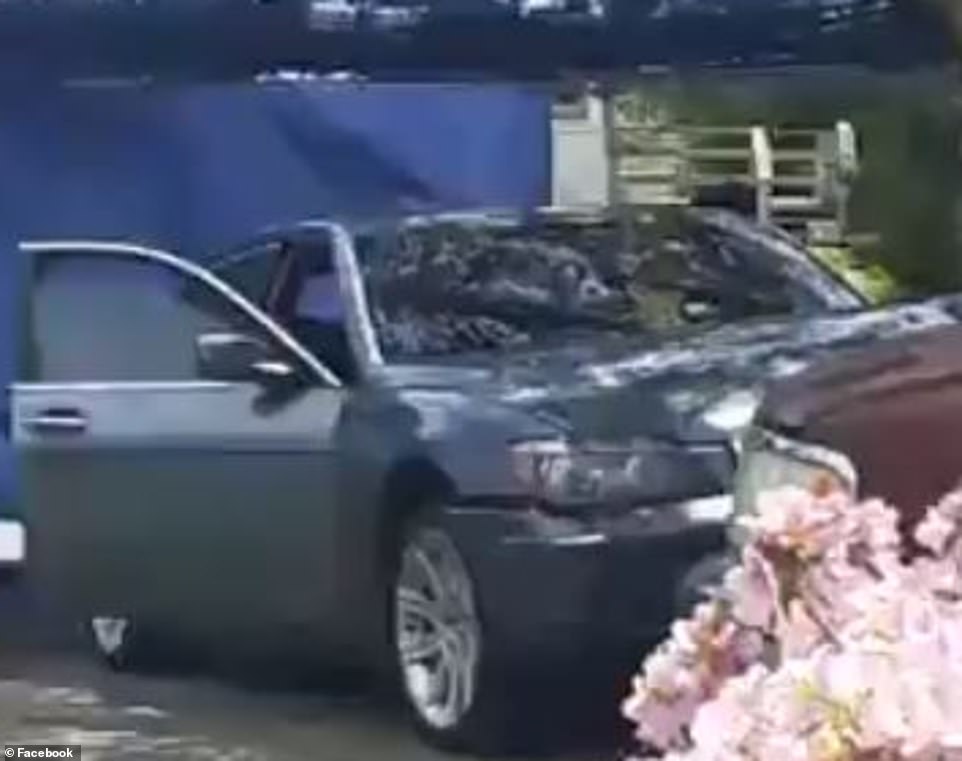 Crump had said Monday: ‘Now, you all may have noticed that they released a warrant saying all kinds of things about Andrew Brown, but they want to redact the face of the … officers that killed Andrew Brown.’

He added that law officials blurring deputies’ faces are ‘going to protect them and not show their face and not say their names … because what they want to do is assassinate the character’ of Brown.

Elizabeth City police were not involved in the shooting.

Elizabeth City-Pasquotank Public Schools are operating remotely until at least Friday ‘due to the continuously evolving state of civil unrest’.

Wooten has said ‘only a judge can release the video’, adding: ‘That’s why I’ve asked the North Carolina State Bureau of Investigation to confirm for me that the releasing of the video will not undermine their investigation.’

He said he hopes to file a motion for its release Monday. 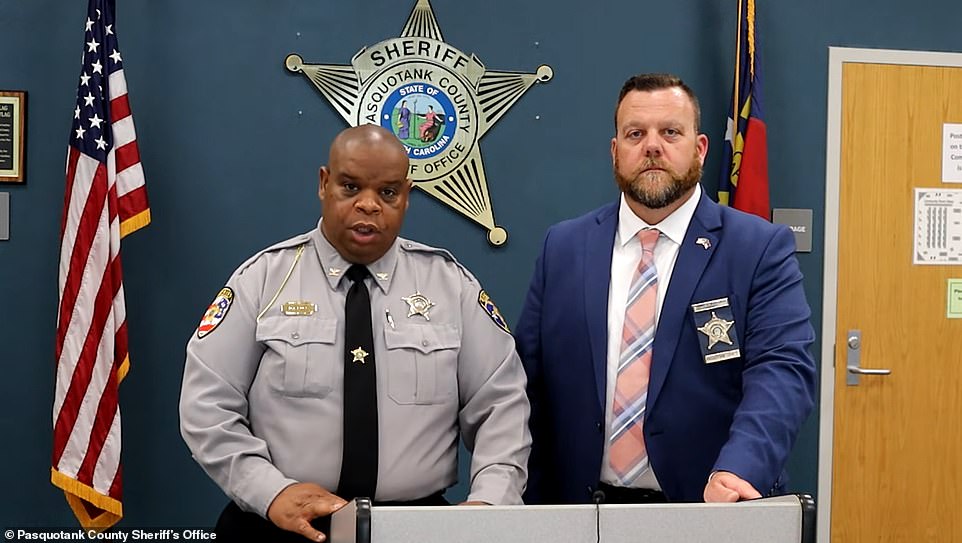 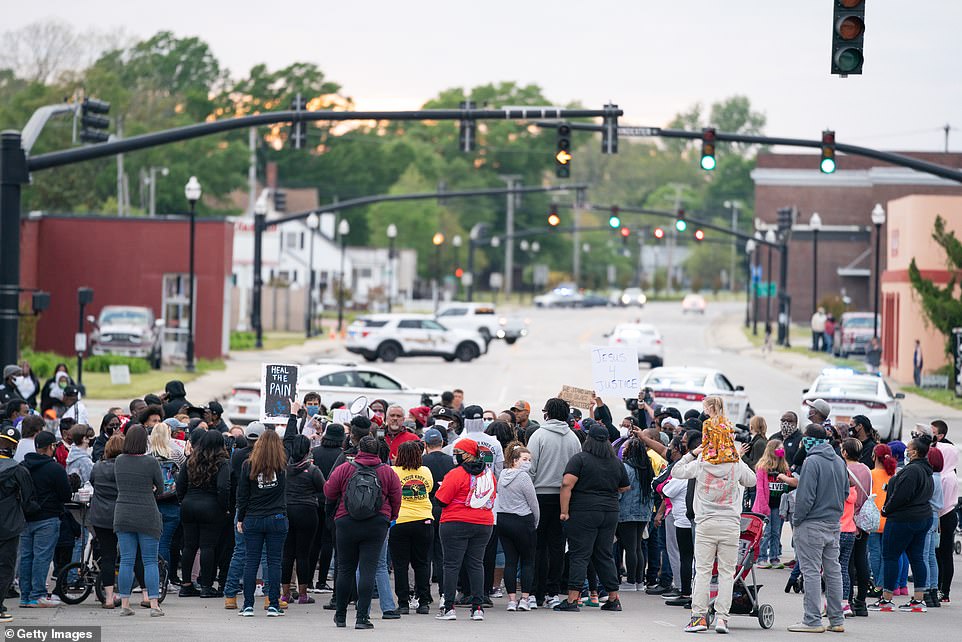 The arrest warrant released on Monday was obtained by the Pasquotank County sheriff’s office and signed by a local judge, to allow the search of Brown’s Elizabeth City home.

It said that an investigator in nearby Dare County was told by the informant that the person had been purchasing crack cocaine and other drugs for over a year from Brown.

The informant described purchasing drugs at the house that was the target of the search.

The warrant said that, in March, local narcotics officers used the informant to conduct controlled purchases of methamphetamine and cocaine from Brown on two separate occasions.

It says both drug transactions were recorded using audio and video equipment.

The search warrant said investigators believed Brown was storing drugs in the home or two vehicles.

The document, which indicated the search wasn’t completed, did not list anything found.

The arrest warrants, which were released last week, charged him with possession with intent to sell and deliver three grams of each of the drugs. 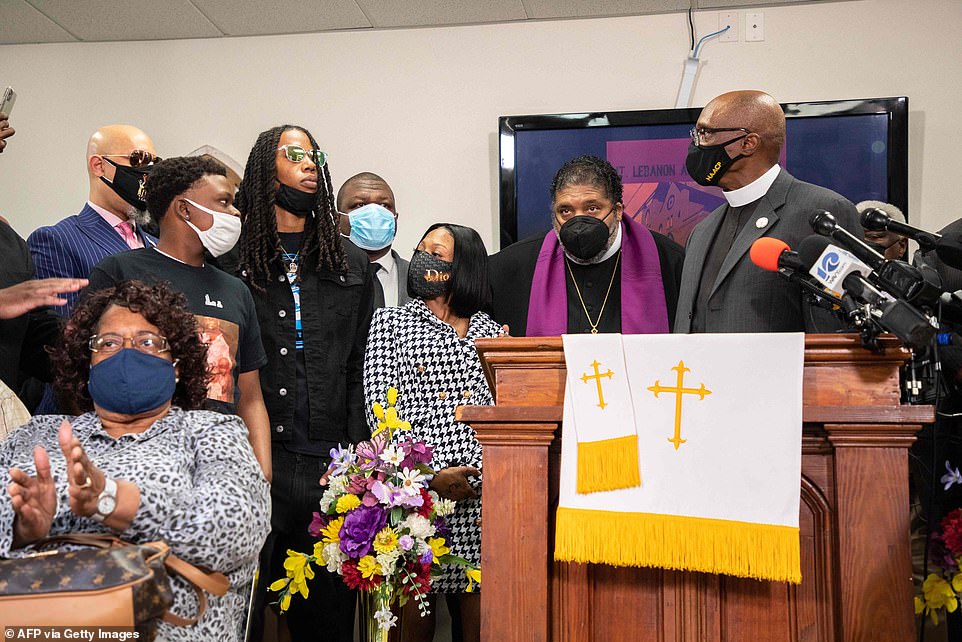 On Saturday, Brown’s family was joined by the local clergy and civil rights leaders including the Rev. William Barber II in Elizabeth City as they put further pressure on officials to make the videos public.

Barber said at the news conference attended by several of Brown’s children and other family members: ‘America, here is the issue: A warrant is not a license to kill, even if a suspect supposedly drives away.

‘A warrant is not permission to shoot someone.

‘We’re sick and tired of all these deaths happening that don’t have to happen.

Keith Rivers, president of the Pasquotank County branch of the NAACP, also spoke at the conference to call for Wooten’s resignation.

On Friday, the state’s governor, Roy Cooper, a Democrat, issued a statement calling for the swift release of the footage.

‘Initial reports of the shooting in Elizabeth City and death of Andrew Brown, Jr. this week are tragic and extremely concerning,’ Cooper tweeted.

‘The body camera footage should be made public as quickly as possible and the SBI should investigate thoroughly to ensure accountability.’

Police described Brown as someone who was well known to police, with a criminal history dating back to the 1990s, including past drug convictions.

Neighbor Demetria Williams, who witnessed part of the shooting, said she never saw Brown carry a gun, and that deputies fired into his car as he was trying to get away from them.

He crashed his car moments later, with Williams saying she saw Brown ‘slumped’ in his vehicle as he died of his gunshot wounds.

Watch the biggest moments from the convention source: cnn.com

It’s been over a month since Election Day, and other than surreptitiously greenlighting the transition to the Biden administration, neither Donald Trump […]