Bay City Rollers singer Les McKeown who fronted the iconic pop rock band during their 1970s heyday has died at the age of 65, his family have announced

The Scottish vocalist, who helped the tartan-clad group secure worldwide success with songs including Bye Bye Baby, I Only Wanna Be With You, and Shang-a-Lang, died suddenly at home.

Today the singer’s family expressed their ‘profound sadness’ as they announced his passing on the band’s Facebook page. A cause of death has yet to be declared.

A statement read: ‘It is with profound sadness that we announce the death of our beloved husband and father Leslie Richard McKeown.

‘Leslie died suddenly at home on Tuesday 20 April 2021. We are currently making arrangements for his funeral.

‘If you would like to remember Leslie, please make a donation in his name to: [details] We thank you and ask for privacy after the shock of our profound loss. Thank you. Keiko and Jubei McKeown’

Born in Edinburgh to Irish parents, McKeown, who was known for his romantic lyrics and Tartan-clad fashion, first joined a band called Threshold before going on to join the Bay City Rollers, in late 1973 at the age of 18. 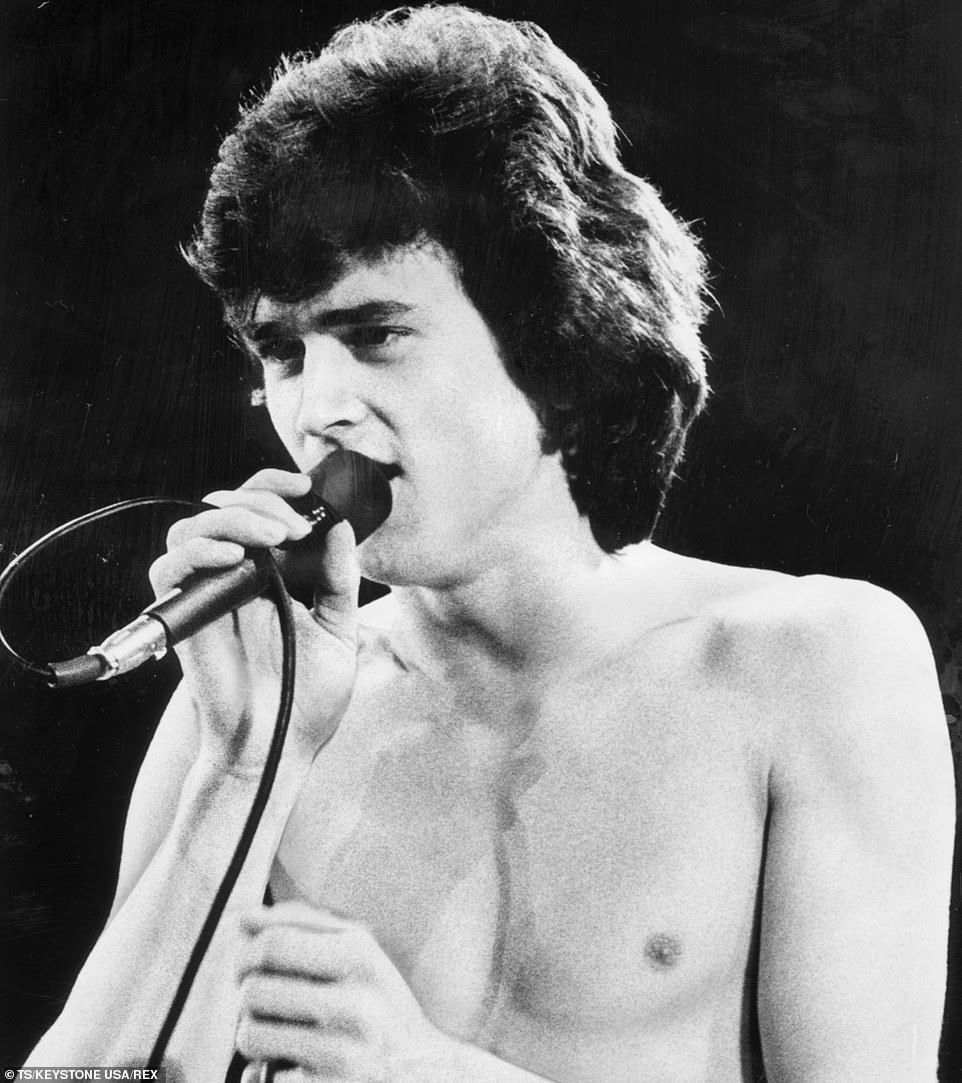 Bay City Rollers singer Les McKeown (pictured in 1977) has died at his home suddenly at the age of 65, his family announced today 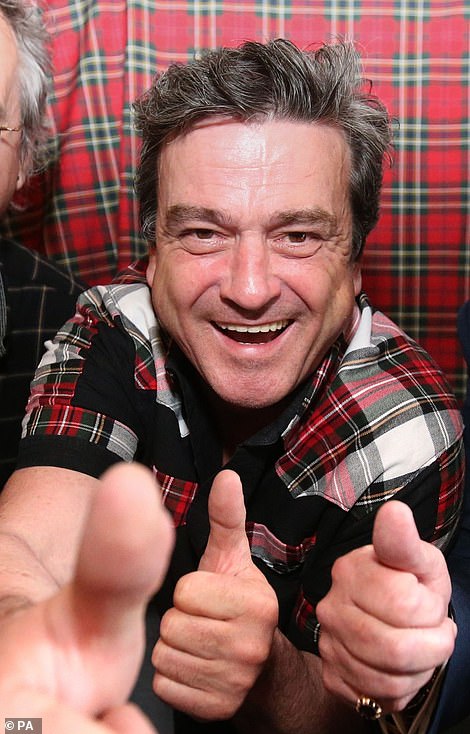 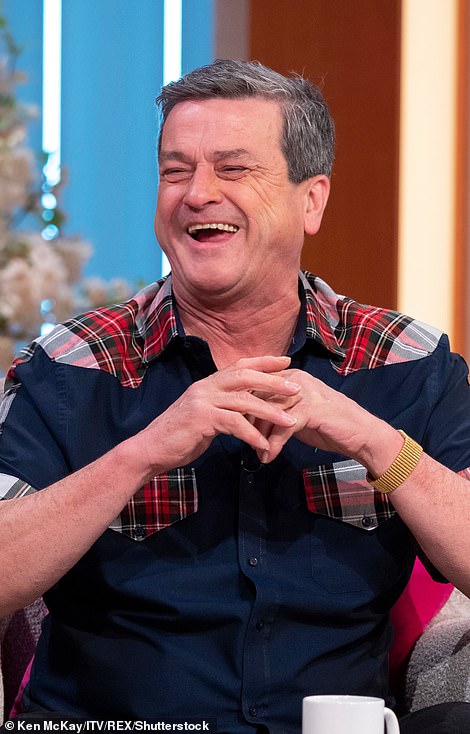 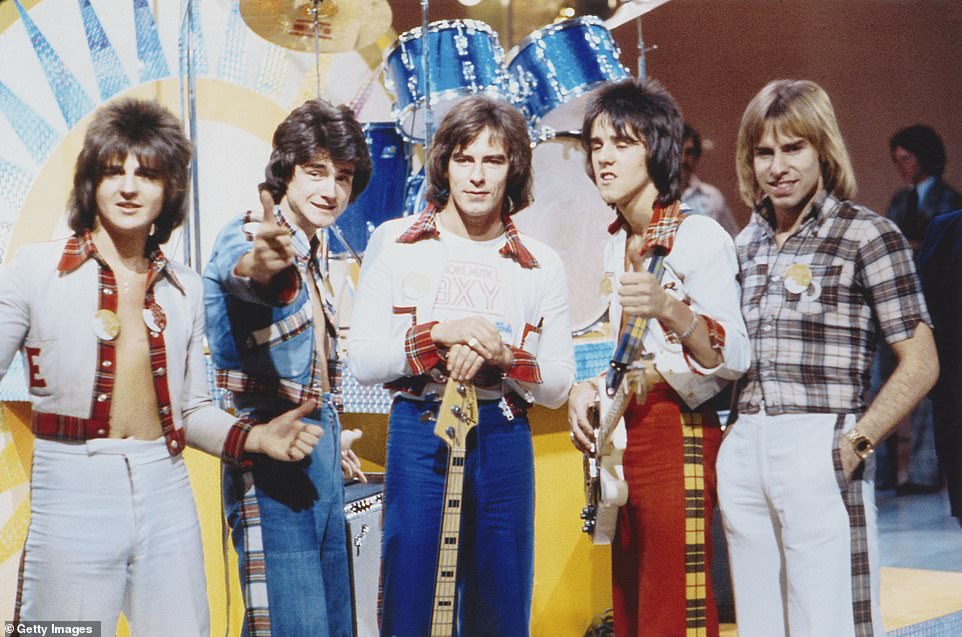 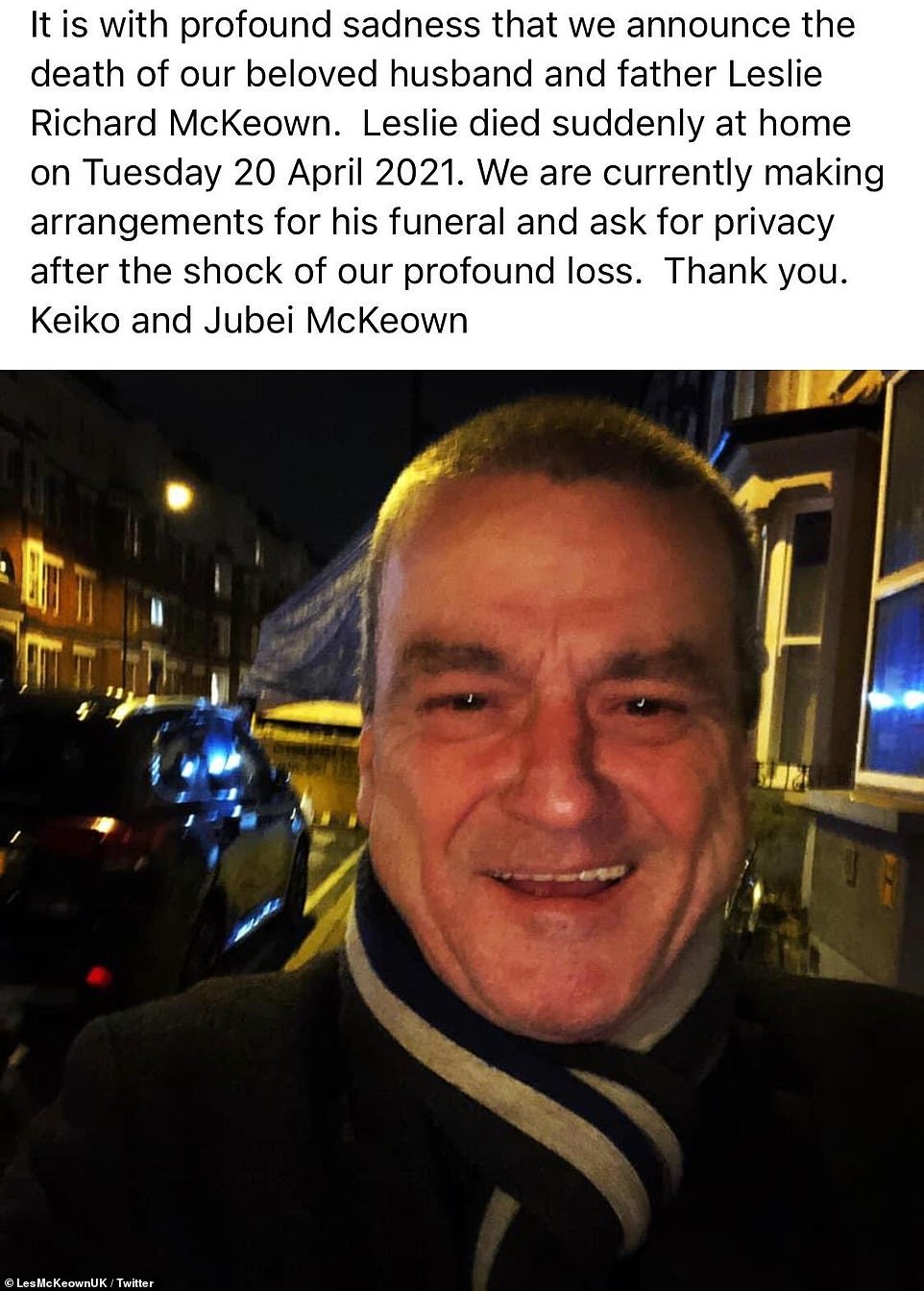 In a message on social media, the singer’s family expressed their ‘profound sadness’ as they announced his passing today

His arrival coincided with the Bay City Rollers’ ascent to fame and McKeown remained lead vocalist until 1978, appearing on Top Of The Pops on a number of occasions.

The band, who in the press were heralded as the ‘biggest group since the Beatles’, saw released their first single  Keep On Dancing in 1971 and had other two number one hits in 1975 with Bye Bye Baby and Give A Little Love.

They went on to gather a large teenage following and sold more than 100 million records, gaining popularity with their distinctive tartan outfits and upbeat pop songs like Bye Bye Baby and Shang-a-Lang.

Despite leaving the band in 1978, McKeown decided to reunite for a comeback tour with Longmuir and Wood in 2015 –  with tickets selling out in minutes.

Today former manager John MacLaughlan said the pop star, who also went on to have a successful solo career, had been hoping to get back on the stage again and was ‘one of the hardest working men in the music industry’.

He said: ‘I’m very sad and shocked and so is Peko, his wife.

‘She is heartbroken and called me from Les’ phone with the news. I picked up and thought it was Les wanting a chat.

‘I’m still in shock right now, I spoke to him last week and he was on great form and happy about life and happy to book his tour. We were friends as well as working partners.

‘He was hoping to get it all going again and he was one of the hardest working men in the music industry.

‘We got on so great and he was great fun to be around. He had his moments but was always a good laugh to be around and a great performer.

He added: ‘He was a great singer. The Bay City Rollers were the biggest band in the world in the mid seventies and beyond.

‘They had their own TV show and Rollermania. They flew the flag for Scotland and made me think as a wee boy watching the telly you can be a popstar and in music and they meant a lot to me getting involved in music and the industry and the clothes and the hair and image were brilliant and the gang mentality was amazing.

‘I’m honoured to have worked with them.’ 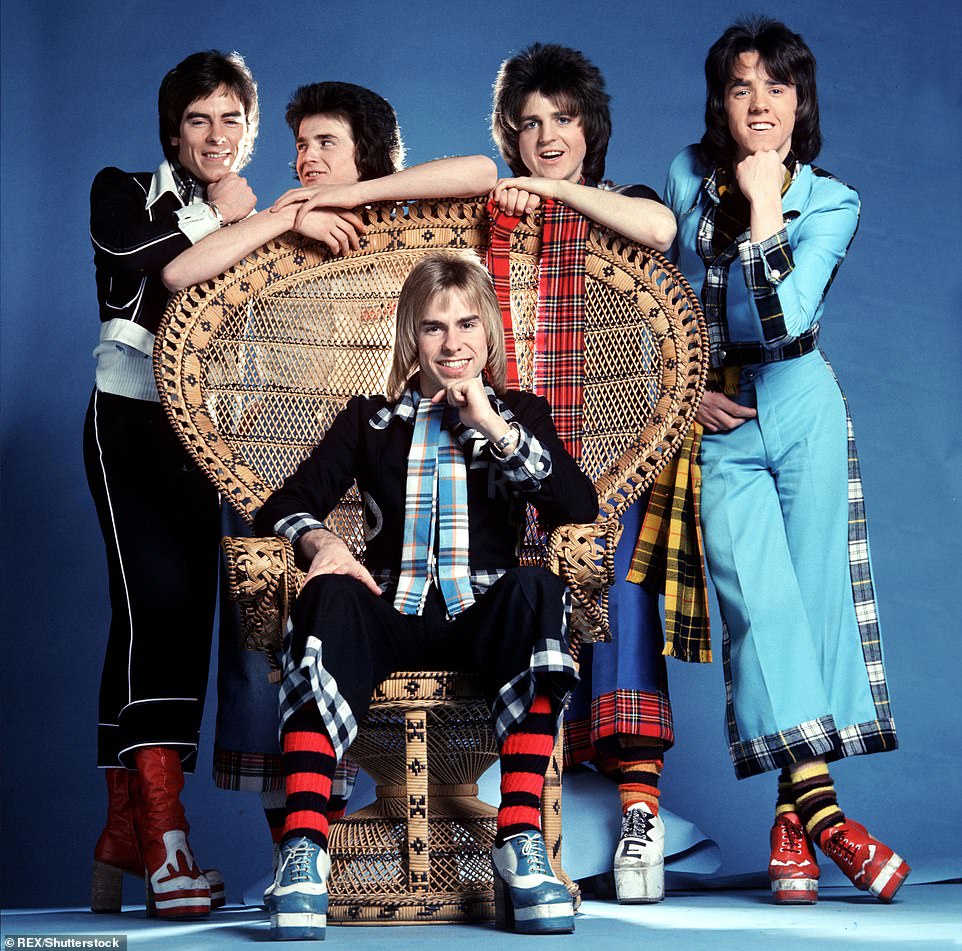 Formed at the end of the 1960s, the Bay City Rollers enjoyed huge success at home and abroad and were heralded as ‘biggest group since the Beatles’ 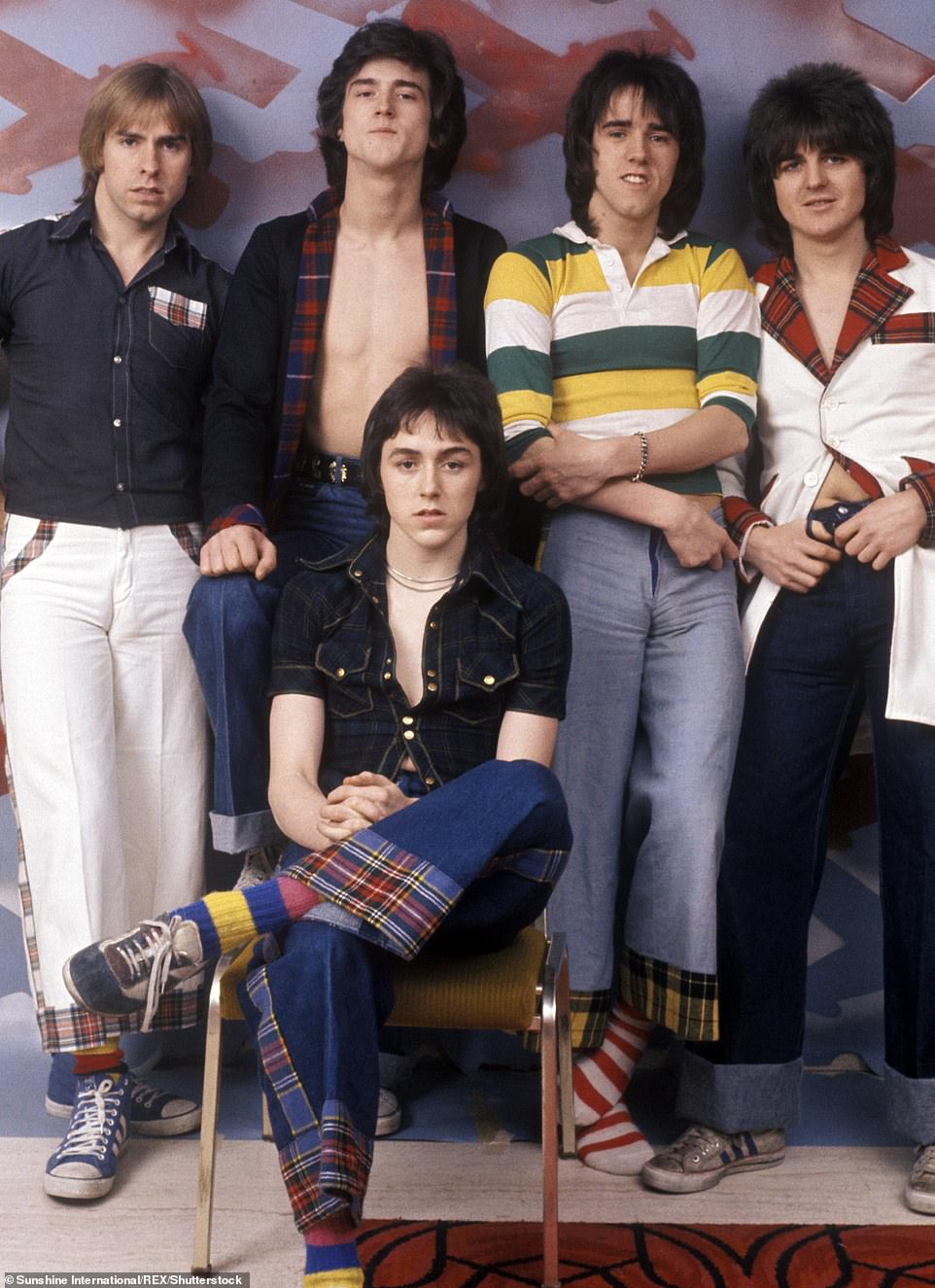 The band, who had massive teenage following and sold more than 100 million records, gained popularity with their distinctive tartan outfits and upbeat pop songs 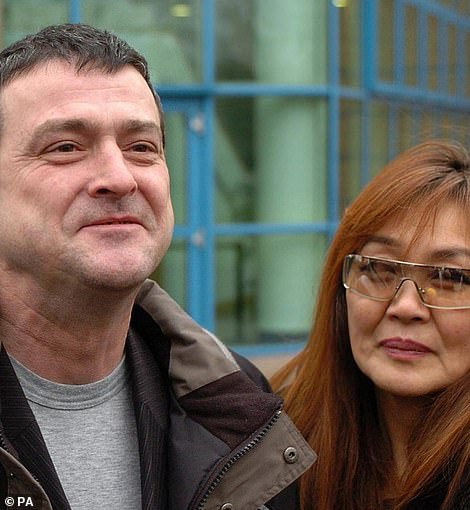 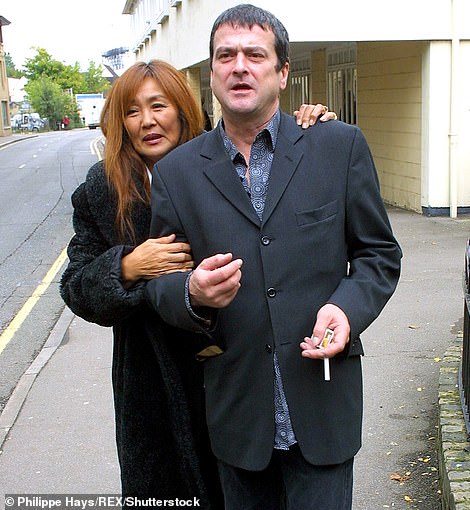 The former Bay City Rollers frontman Les McKeown (pictured with his wife Peko Keiko, left and right), has been described as one of the hardest working men in the music industry after his death on Tuesday

Guitarist Stuart Woody Wood said: ‘I am upset and shocked to hear this very sad news.

‘Les and I had our differences over the years but even though we had disagreements we are sending our heartfelt condolences to Peko wife and his son Jubie and all the Bay City Rollers Fans. It’s a sad day in Bay City Roller history.

‘He was a great performance on stage and he was full of energy. Iwas roadying when Les first came into the band and I saw his first gig when he took over from Nobby Clark and injected new life into the band.

‘I was fifteen and he was seventeen. I joined properly when I turned sixteen in 74. He had lots of energy on stage.’

At the height of their fame in 1975, the iconic pop group saw their single Saturday Night reach No 1 in the US charts.

However in 1975, as his fame continued to rise, McKeown was fined £100 and banned from driving for a year after he struck and killed elderly neighbour Euphemia Clunie in Edinburgh.

Despite some witnesses claiming the singer was driving too fast, McKeown always insisted he was driving at 40mph.

In 2005, the singer was also banned from driving for 18 months and fined £1,000 after he was found to have been driving while drunk, over twice the legal limit.

Later that year McKeown revealed he had been struggling with alcoholism.

He told The Mirror: ‘For six years from 2002 I was falling down a couple of bottles of whisky a day. I wasn’t really wanting help, I was quite happy getting drunk all the time.’

In 2006, the frontman was acquitted of conspiring to supply cocaine, after a two-week trial at Basildon Crown Court.

McKeown’s passing comes after bassist Ian Mitchell, who joined the band in 1976 when he was 17 to replace founding member Longmuir, died aged 62 in September 2020.

Mitchell, who was from Northern Ireland, was the first band member born outside of Edinburgh, but left after seven months. 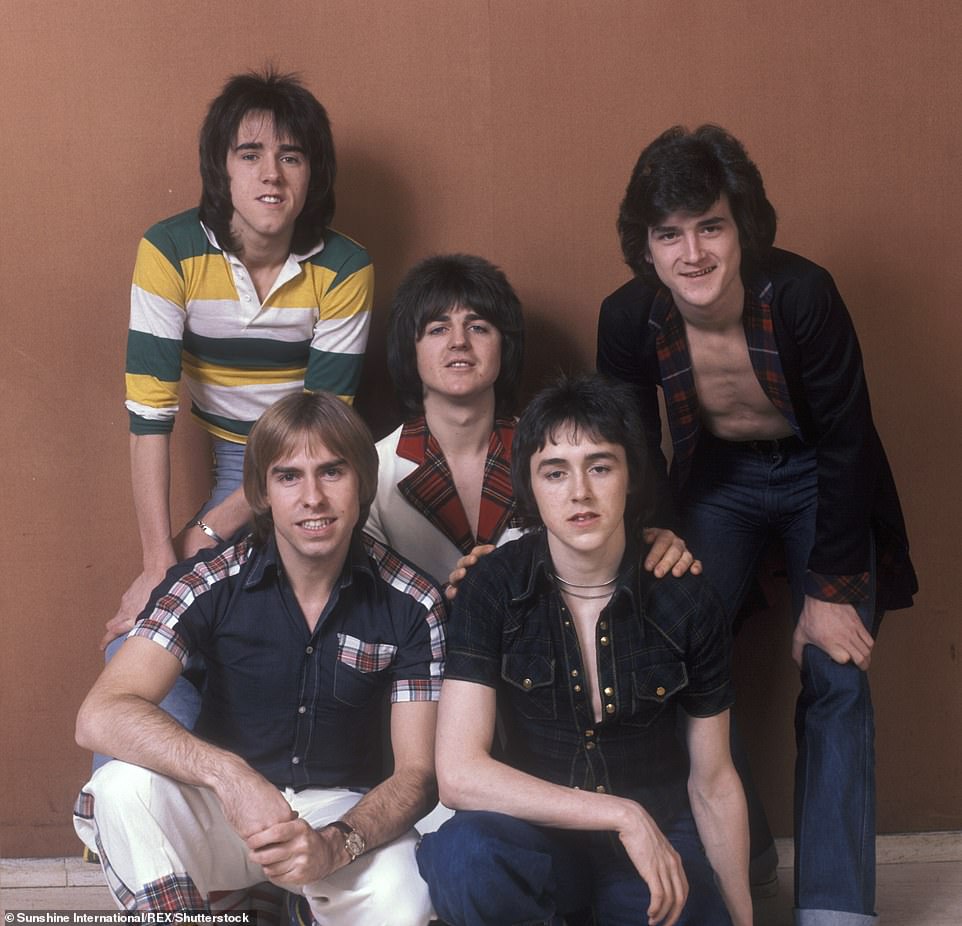 The band was formed by Alan Longmuir, who died in 2018, with his younger brother Derek – who was the band’s drummer

While Mitchell was with the Rollers, they released the 1976 album Dedication and a cover version of Dusty Springfield’s I Only Want to Be With You.

But he found tensions within the band hard to cope with and departed that December, to be replaced by guitarist Pat McGlynn.

While with the Bay City Rollers Mitchell recorded one album, Dedication, in 1976, and had a hit cover of the Dusty Springfield song ‘I Only Want to be With You.’

The track reached number 12 on the US charts.

He also earned a mention in Friends in a 2001 episode when Monica and Chandler get engaged.

The 70-year-old musician, who co-founded the Scottish pop group with his brother Derek, died in hospital after contracting an illness in Mexico while on holiday with wife Eileen.

He was flown back to Scotland and placed into care at the Forth Valley Royal Hospital in Larbert, Falkirk, where he spent three days fighting for his life before succumbing the the virus.

In 2002, the band’s drummer Derek Longmuir, who founded the group with his brother Alan, was sentenced to 300 hours of community service at Edinburgh Sheriff Court for possessing child pornography.

He pleaded guilty to the offence, but maintained the offending materials did not belong to him and were instead left behind by an acquaintance.

On the official Bass City Rollers Twitter page today a message read: ‘We are saddened by the news of Leslie McKeown’s death. Our thoughts and prayers are with his wife Peko and his son Jubei, their family and friends. Rest In Peace, Leslie’.

Meanwhile former Home Secretary Jacqui Smith wrote: ‘One of my first loves. I’m feeling some teen heartache but know it’ll be very real for his family and friends. Sending love, condolences and thanks for the memories.’

Elsewhere boxer Frank Bruno wrote: ‘RIPLesMcKeown Bay City Rollers frontman he was part of the music scene when I was growing up & I remember tartan clad girls all screaming.

‘It was a hysteria era music wise with The Osmond’s David Cassidy & Bay City Rollers seems like yesterday I was more into Reggae & soul music.’ 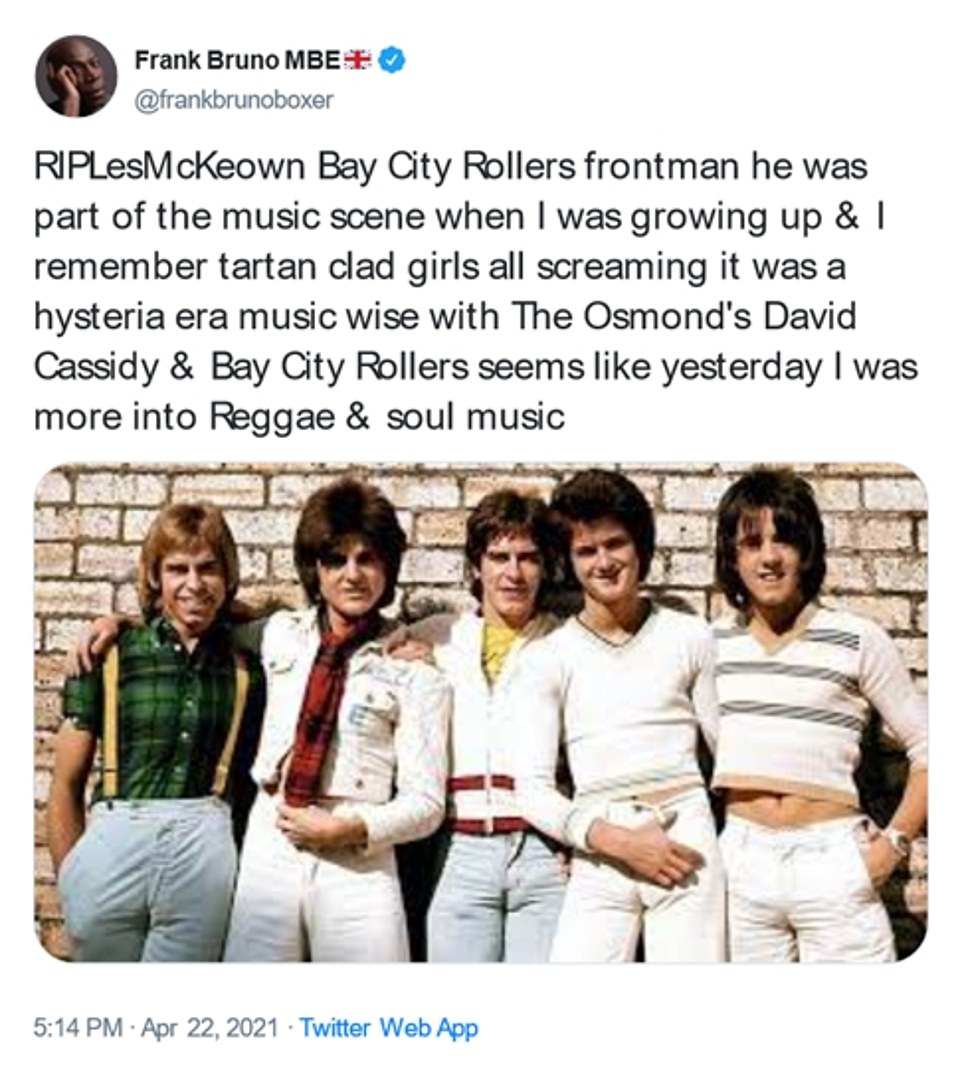 Following the announcement of his death, tributes have been paid to the former frontman of the Bay City Rollers on social media

The other key members of the iconic band Bay City Rollers 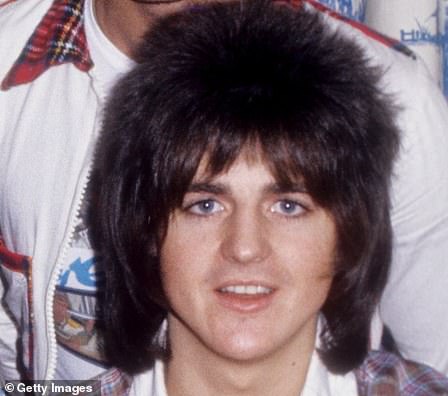 Faulkner joined the Bay City Rollers in 1972 as their guitarist and was one of the main faces of the band over the years.

He co-wrote more than half of the recorded catalogue of Rollers songs including the ‘Money Honey’ and ‘Love Me Like I Love You’.

Faulkner also worked on a reformed version of the band in the 1990s.

In the last 10 years Faulkner has appeared at a number of music festivals including Parkfest and The Edinburgh Guitar and Music Festival.

According to a book by fellow Bay City Rollers star, Alan Longmuir, Faulkner had a major health scare in 2015 when he developed viral encephalitis – an inflammation of the brain.

In recent years, Faulkner, now 66, has written his own folk music, which he posts for free, with an option of a donation, on his website. 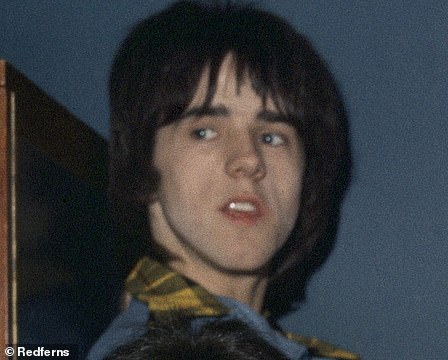 Stuart Wood, known as ‘Woody’, was a guitarist in the Bay City Rollers

Stuart Wood, known as ‘Woody’, was a guitarist in the Bay City Rollers. He joined in 1974, helping the band to make their breakthrough.

After his success with The Rollers, Wood moved to South Africa and performed in a band called The Passengers, which became a chart topping success throughout the 1980s.

He later returned home to Scotland and in 2007 produced the debut album for Scottish folk duo the MacDonald Brothers.

Wood is still said to be active in music.

In a 2019 interview with the Sun, he said his biggest regret was not getting one last Saturday Night out with his late bandmate Alan Longmuir. 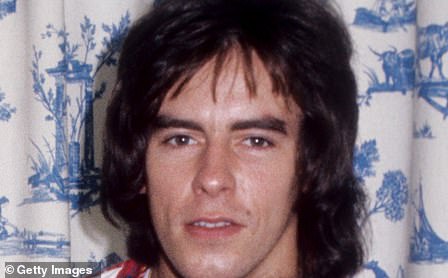 Alan Longmuir was one of the founding members of the Bay City Rollers, along with his younger brother Derek

Alan Longmuir was one of the founding members of the Bay City Rollers, along with his younger brother Derek. He played bass guitar.

In 1976, at the height of the band’s popularity, Longmuir left and was replaced by Mitchell, who was later replaced by Patrick McGlynn.

Longmuir returned to the group in 1978 following McGlynn’s departure.

He later became the owner of Castle Campbell Hotel in Dollar, Clackmannanshire, but suffered two heart attacks and a stroke.

Longmuir died, aged 70, in hospital in Scotland after contracting an illness while on holiday in Mexico. 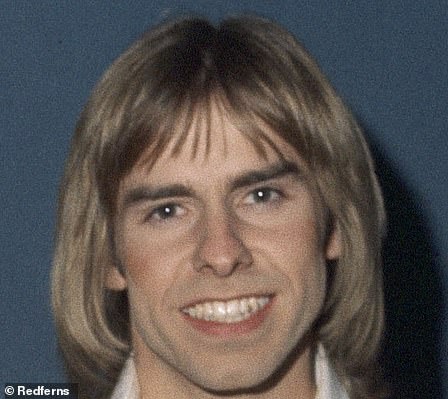 Derek Longmuir was one of the founding members and the drummer for the Bay City Rollers.

He retired from music in the 1980s and trained in nursing.

He was sentenced to 300 hours of community service after admitting possessing child pornography in 2000.

He pleaded guilty to the offence, but maintained the offending materials did not belong to him and were instead left behind by an acquaintance. 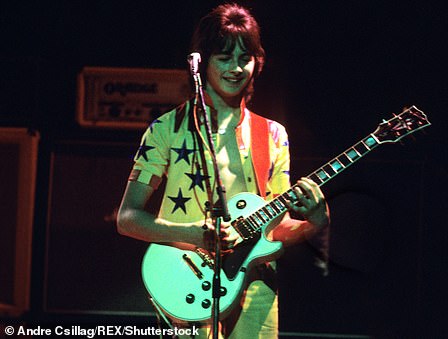 However the musician made a lasting impact with the band, with whom he recorded the hit Dusty Springfield cover ‘I Only Want to be With You’.

While with the Bay City Rollers Ian recorded one album, Dedication, in 1976, and had a hit cover of the Dusty Springfield song ‘I Only Want to be With You.’

The track reached number 12 on the US charts.

He also earned a mention in Friends in a 2001 episode when Monica and Chandler get engaged. 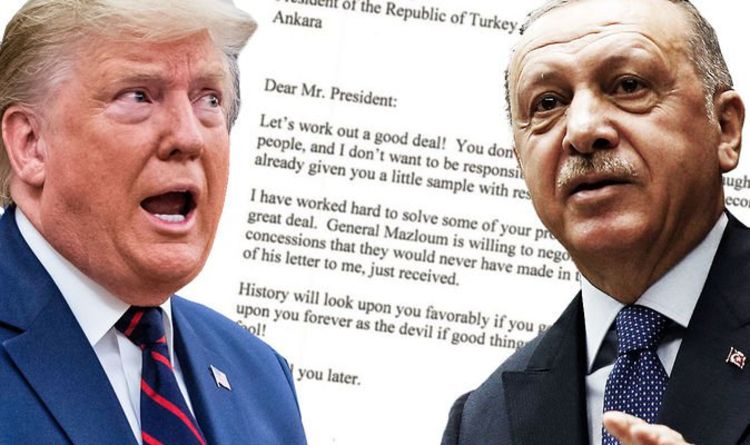 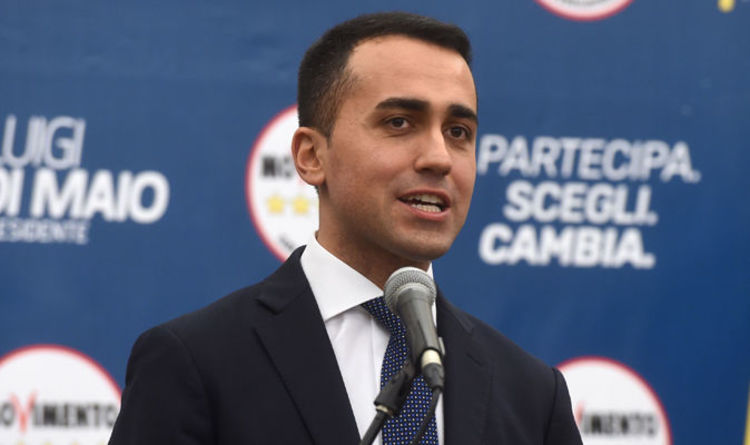