Soho Karen Miya Ponsetto has been a regular fixture in headlines ever since she was identified as the woman filmed attacking a 14-year-old black boy – but now the 22-year-old former cheerleader is earning attention for a very different reason: her fashion choices.

Namely, her bizarre dedication to crop tops, Birkenstocks, and leggings, a sartorial combination that she has modeled time and time again – even during the most somber of occasions, like Saturday’s New York City court hearing during which she was arraigned for the assault on Keyon Harrold Jr.

Ponsetto was pictured being led out of the NYPD’s 1st Precinct in handcuffs on Saturday morning wearing a pair of high-waisted black leggings, a cropped burgundy sweater, and a pair of gray Birkenstock sandals over black socks. 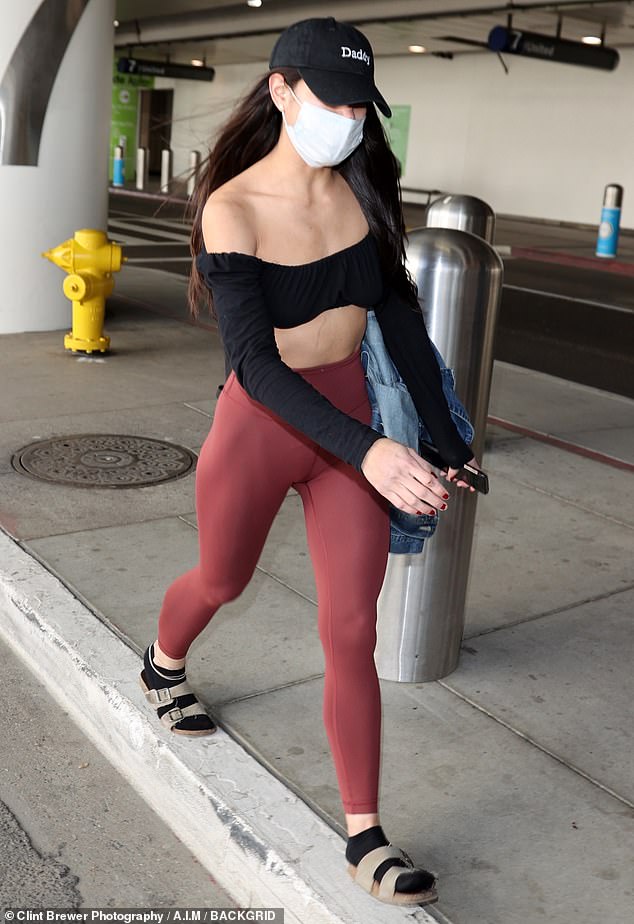 Uniform: Soho Karen Miya Ponsetto has earned fresh criticism online, this time for her fashion choices, after she was repeatedly pictured wearing a crop top, leggings, and Birkenstocks 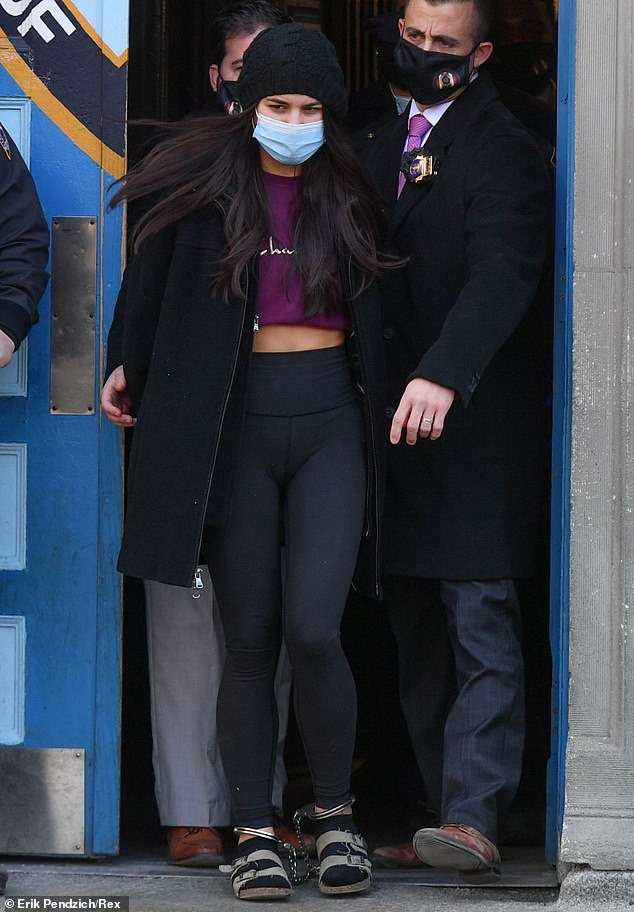 Suitable? The 22-year-old was slammed for choosing to wearing a version of the casual look to her court hearing in New York City on January 9, when she was charged with four felonies 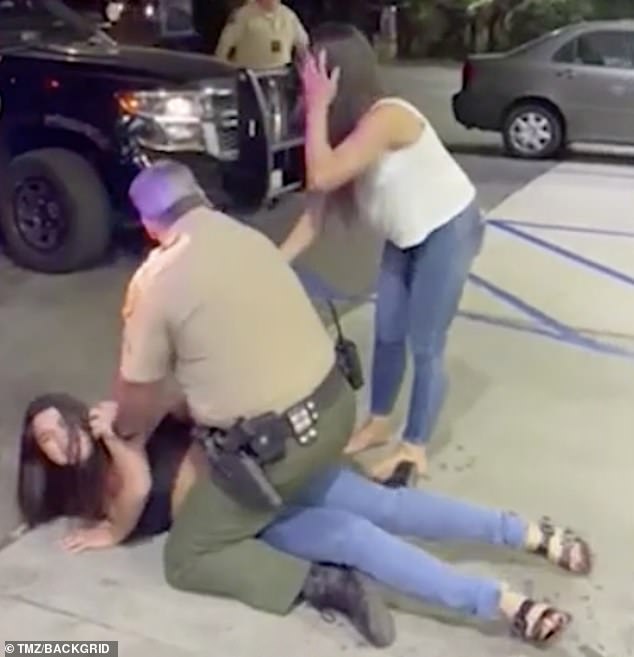 Way back when: On Monday, video footage emerged of Ponsetto being arrested for a DUI in October. In the clip, she is once again seen modeling a crop top and Birkenstock sandals

The incredibly casual ensemble prompted questions from baffled social media users, who were horrified by Ponsetto’s decision to wear such an informal outfit to such an important occasion, with one person writing on Twitter: ‘Who appears in front of a judge dressed in a crop top? This piece of trash, that’s who.’

Others pointed out that the combination of crop top, leggings and Birkenstock has become something of a ‘uniform’ for the California native, who has been pictured on a number of occasions in recent weeks wearing a different variation of the look.

On Monday, footage of Ponsetto being arrested in October for a DUI in her home state of California emerged – showing her screaming at cops, while they attempt to cuff her.

Once again, the 22-year-old is seen modeling a crop top and a very tattered pair of Birkenstocks – although on this occasion, she paired her favorite fashion items with some jeans and a black belt.

Ponsetto first shot to infamy after Keyon Jr’s father, Grammy-winning jazz artist Keyon Harrold, posted a video of her taken at the Arlo SoHo hotel in which she could be seen grabbing at the teen while repeatedly accusing him of snatching her phone.

He captioned it: ‘On Saturday, December 26, the woman in this video falsely accused an innocent 14-year-old teenager of stealing her cellphone.

‘She then proceeded to physically attack him and fled the location before police officers arrived on scene.’ 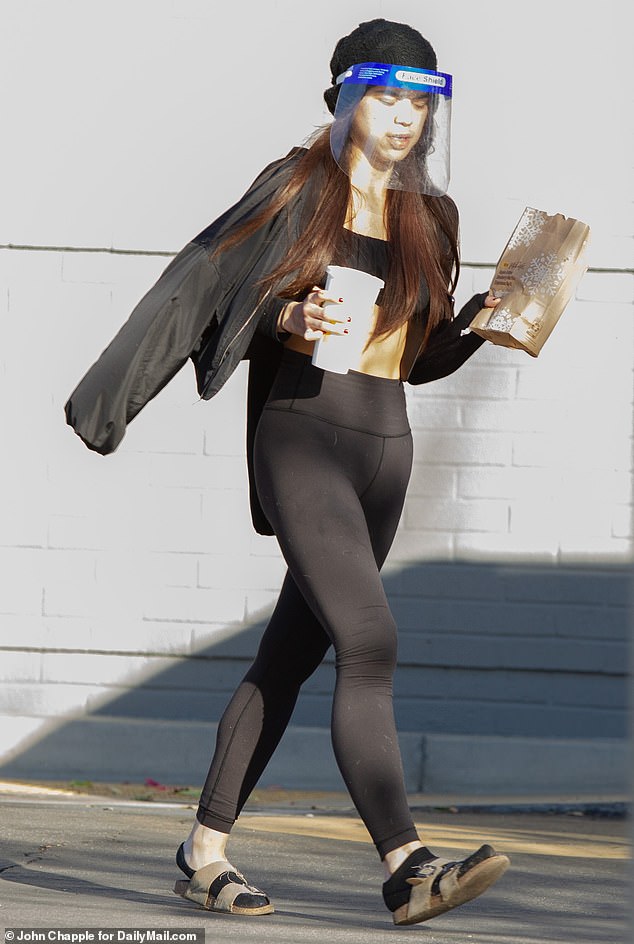 Uniform: Many social media users and DailyMail.com readers have criticized her look of choice, which she is seen wearing during a trip to McDonald’s on January 1

A second video released by the NYPD shows Ponsetto, who was swiftly dubbed Soho Karen, running at the child and grabbing at his waist. Moments after the video ended, an Uber driver arrived with Ponsetto’s phone, which she had left in the vehicle.

Shortly after the incident – for which Ponsetto has since been charged with four felonies: attempted robbery, endangering the welfare of a child, attempted grand larceny, and attempted assault – the former cheerleader fled back to California, where she was pictured in exclusive DailyMail.com images making a quick trip to a local McDonald’s, while once again modeling a crop top, leggings, and her beloved sandal-sock combination.

Days later, Ponsetto was arrested on a New York warrant following a brief car chase in her home state of California, and was remanded in jail after she agreed to be extradited to New York to face felony charges.

Video footage of the extradition hearing captures one of the rare occasions when Ponsetto has been seen wearing anything other than a crop top and leggings; instead, she was forced to appear in blue and red prison scrubs.

However, upon her return to New York, Soho Karen took the opportunity to once again embrace her favorite fashion look, wearing the combination for her court hearing – before donning different versions of the style the following day when she was pictured flying home to California from Newark.

For this outing, Ponsetto opted for orange leggings and a long-sleeved black crop top, and her well-worn Birkenstock sandals, which she paired with an oversized denim jacket and a black baseball cap featuring the word ‘Daddy’ across the front.

Several DailyMail.com readers commented on the airport images to question why Ponsetto only ever seems to wear different versions of the same look – with one person writing: ‘Does she own any clothes besides leggings, crop tops, and Birkenstock’s?’

Oh dear: One person described Ponsetto’s crop top-and-leggings look as ‘trash’. She is seen wearing the outfit in LA after flying back to her home state from New York on January 10 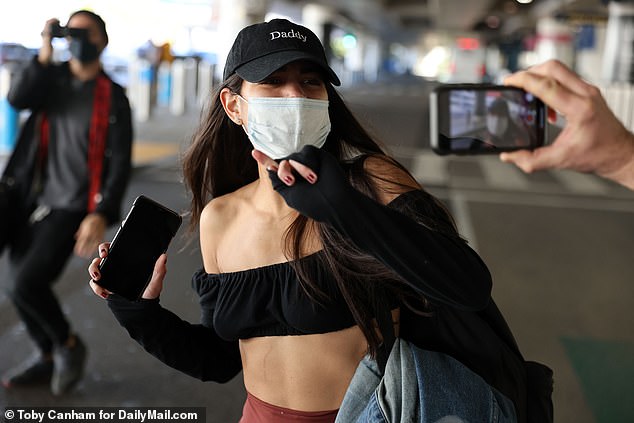 Unique: Upon her arrival back in California, Ponsetto was also seen wearing a baseball cap with the word ‘Daddy’ across the front of it 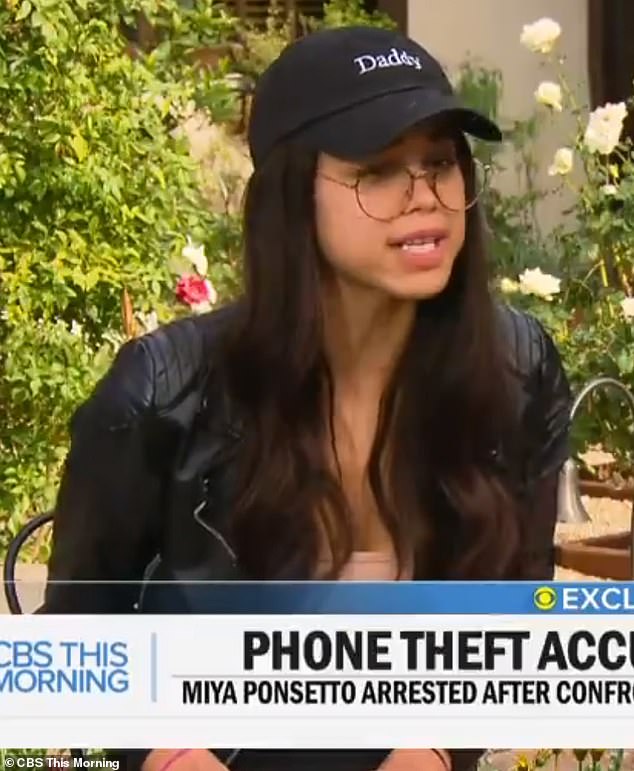 Lucky charm? She also wore the baseball cap during an interview with CBS This Morning – despite her lawyer advising her to remove the offensive accessory

‘Is leggings and ragged sandals with socks the only thing this girl wears?? On a serious note, she needs some severe mental help,’ a third person wrote.

Others have voiced confusion over her choice of hat, which she was first seen modeling during a January 8 interview with CBS This Morning’s Gayle King, hours before her arrest.

‘I’m not understanding how Soho Karen thought it was okay to do an interview in a crop top and a dad hat that reads “daddy”,’ one person wrote on Twitter, while another added: ‘Omg that Soho Karen had the audacity to show up in the interview w/ crop top & hush Gayle.

‘She deserves NO sympathy & as many charges as possible for false report on a black teen for theft was Wrong!’

Shortly after the interview aired, Ponsetto’s attorney, Sharen Ghatan, revealed that she had urged her client to remove the cap before going on-air, but said that the 22-year-old had defiantly refused to take it off.

‘The hat definitely wasn’t chosen by me,’ Ghatan told The Daily Beast, while revealing that she decided to cancel other planned interviews after realizing what a train wreck the CBS one had been.

‘My office gave her advice on what to wear. We asked her to wear professional attire. When she came to the interview, I told her the baseball hat wouldn’t be something we could use in the interview. One because of the lighting, two because of the logo. She was very defiant and insistent that she wear it. 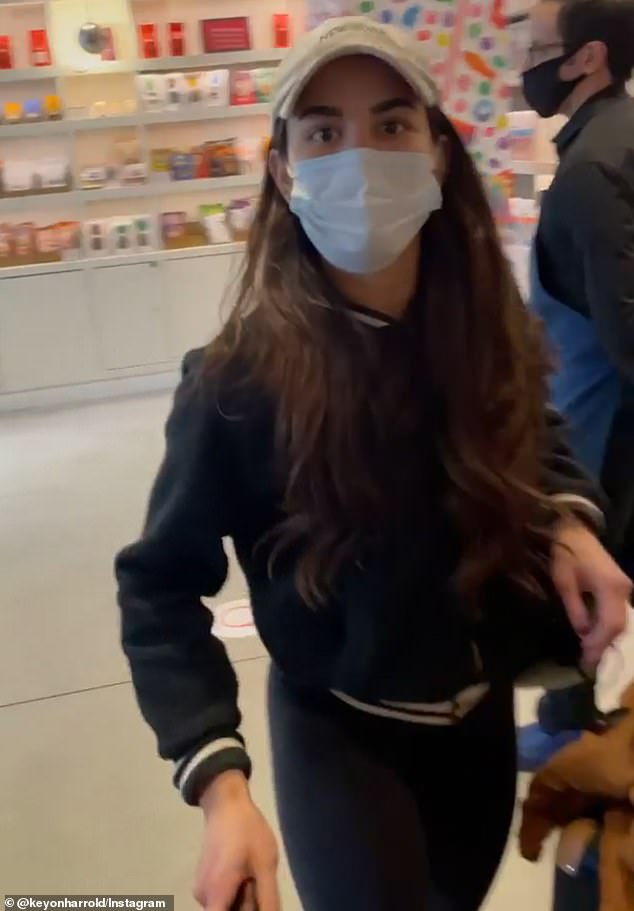 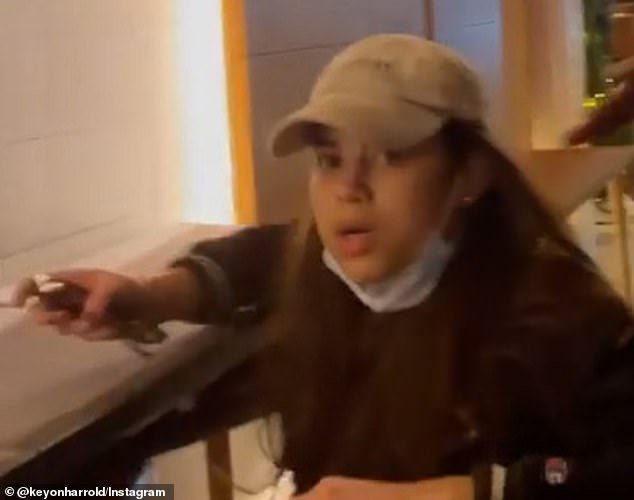 Unmasked: After the former cheerleader was identified, she was arrested and charged with four felonies, including endangering the welfare of a child and attempted robbery 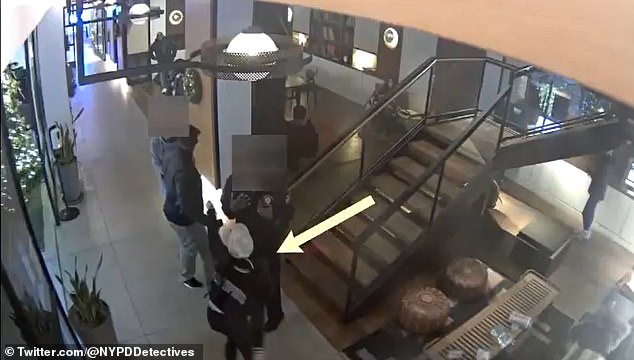 Shocking: A second video released by the NYPD shows Ponsetto, who was swiftly dubbed Soho Karen, running at the child and grabbing at his waist

‘I specifically asked her to remove it before the interview. She said it’s her story, it’s her hat, and she wants to wear it. She’s a very challenging client.’

Ponsetto’s arrest came after days of intense media coverage of the fracas at the hotel and demands by the Keyon Jr’s family and activists that Ponsetto face criminal charges.

The Harrold family have claimed the incident was racially motivated but Ponsetto has denied this.

NYPD detectives flew to California to help locate her after Manhattan District Attorney Cyrus Vance signed off on charges of attempted robbery and felony fugitive from justice.

The altercation drew comparisons to cases like that of Amy Cooper, a white woman who was charged with filing a false report for calling 911 and saying she was being threatened by ‘an African American man’ during a dispute in New York’s Central Park in May.

Keyon Jr’s parents have said her arrest is ‘a start’.

‘I pray for her. In the context of all the excuses her attorney made, at this point it’s not even about an apology any more,’ the teen’s father told ABC’s Good Morning America on Friday.

The teen has been in music therapy ever since the incident, his family say. 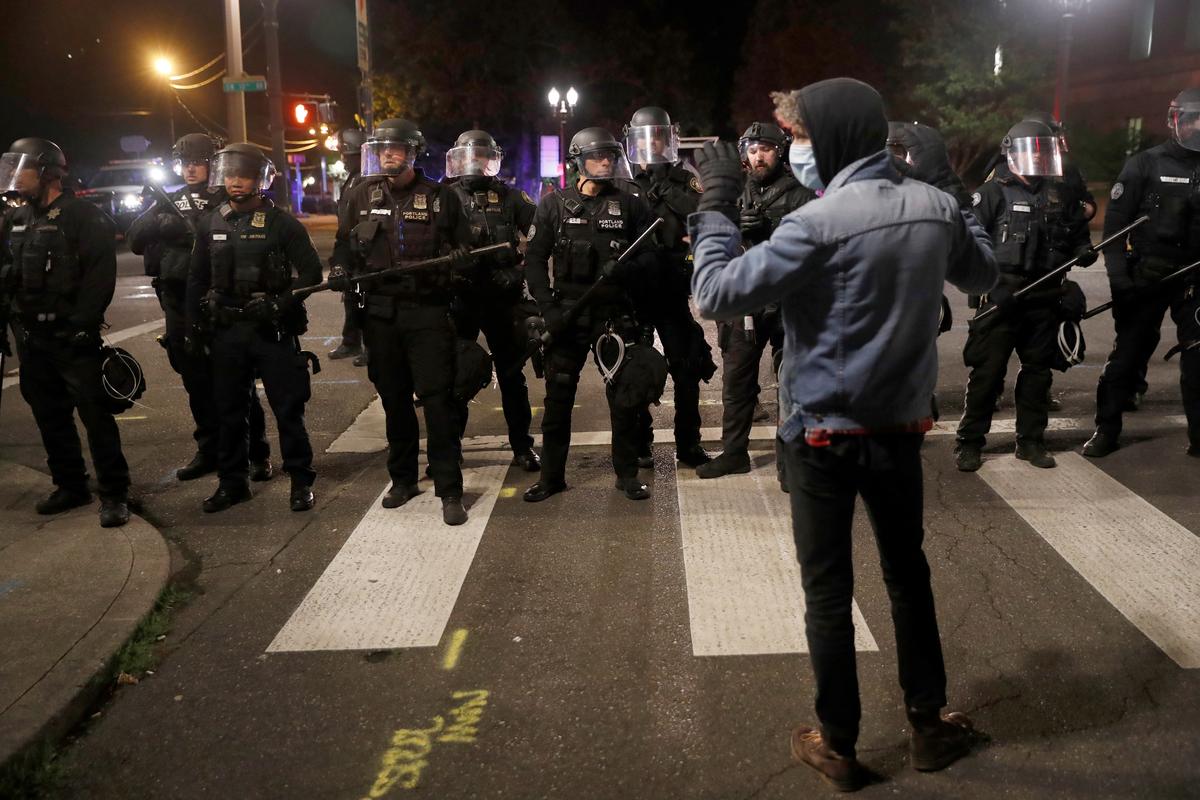 FILE PHOTO – A protester confronts police while rallying against the death in Minneapolis police custody of George Floyd, in Portland, Oregon, […] 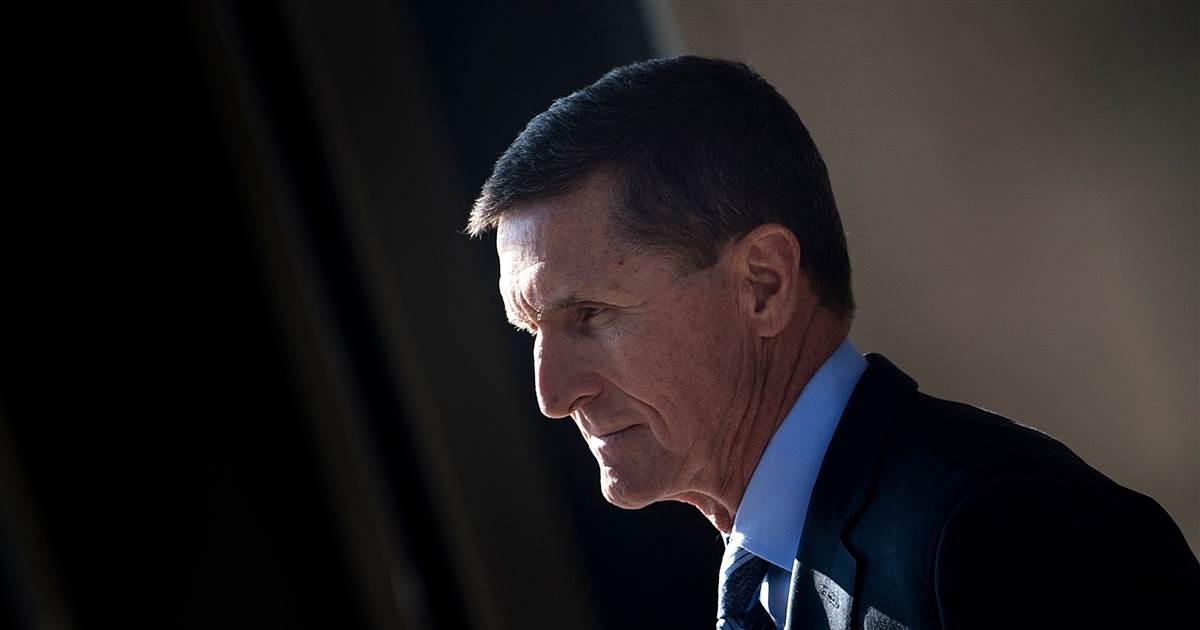 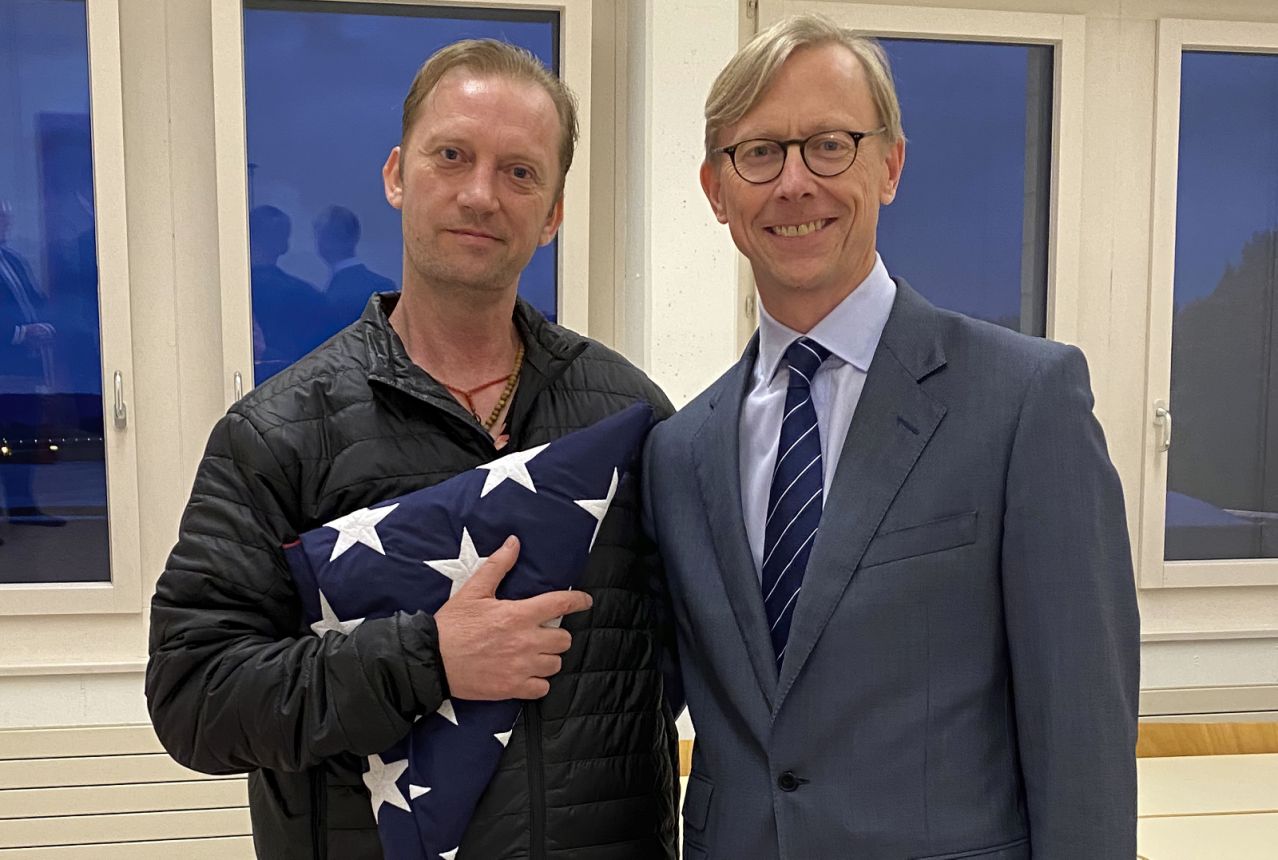 WASHINGTON (AP) — A U.S. Navy veteran whose family said his only crime was falling in love left Iran on Thursday after […] 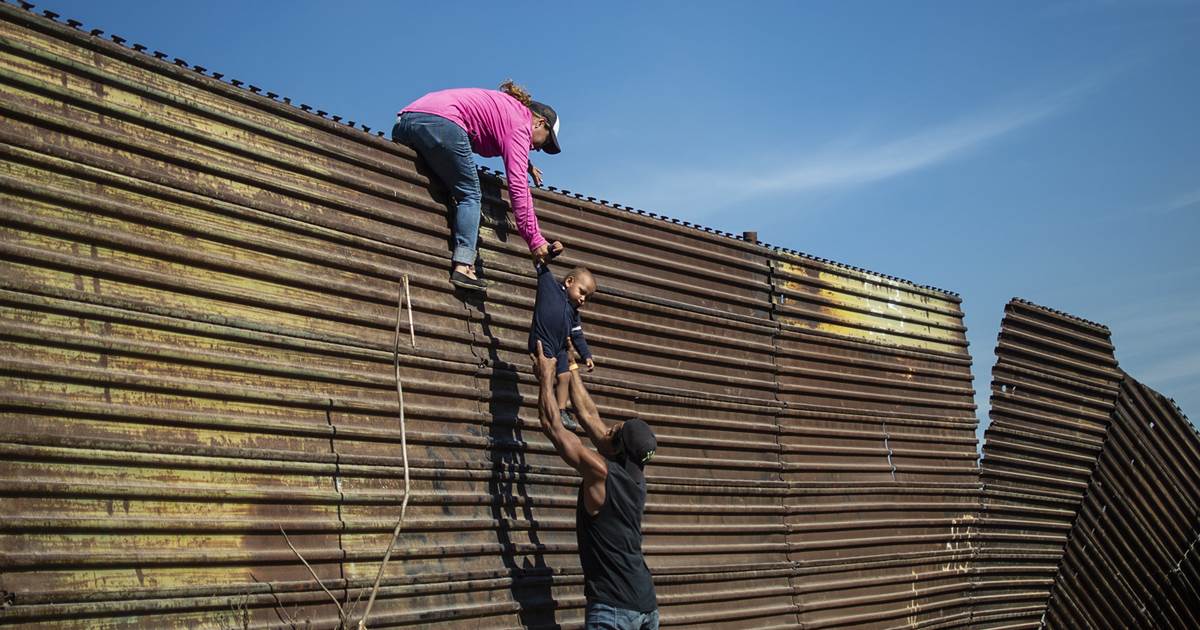 Get the Think newsletter. SUBSCRIBE Jan. 13, 2019, 11:15 AM GMT By Cristina Novoa, policy analyst, Center for American Progress The president […]