Manchester City ended their paltry Premier League goal return in style. After scoring only 10 in eight previous matches this was Pep Guardiola’s side at their silken best.

Riyad Mahrez was the star turn with a hat-trick completed on 69 minutes, his header created by Phil Foden’s clever dink, the youngster having only entered moments before. With Liverpool dropping two points earlier in the day, the win closes City to six points from the champions, having played a game fewer .

Despite starring against Olympiakos Foden began as a replacement, alongside Raheem Sterling, while Sergio Agüero was not in the 18 as City welcomed visitors who could not gaze at recent history for a boost. Guardiola’s side had beaten Burnley by an aggregate of 15-0 in their last three outings here and today City needed only six minutes to open proceedings.

James Tarkowski’s loose pass that went to Rodri was punished as the latter fed Ferran Torres. Suddenly City were in as Kevin De Bruyne tapped possession to Mahrez and his left foot finish beyond Bailey Peacock-Farrell was slide-rule precise.

After a Rúben Dias miscued clearance was not taken advantage of at a corner the Clarets were in disarray again. Once more, City moved through them with ease. Benjamin Mendy turned the ball in-field to Ilkay Gündogan, the German’s chip removed Burnley’s rearguard, and there was Mahrez though his header failed to find Gabriel Jesus.

This year’s City often features a quasi extra holding player who operates a little ahead of Rodri, the dedicated man in the position. This afternoon it was Gündogan. And while the ploy can slow City down a fraction, midfield does become more muscular and so it was that Sean Dyche’s side were being overpowered in this area.

If Burnley manager had to solve this puzzle he could not legislate for self-inflicted wounds – as occurred again. This time an innocuous Kyle Walker throw aimed for Mahrez was missed by Charlie Taylor. It meant the classy Algerian was in and a glide across the area presaged a pinpoint strike off Peacock-Farrell’s right post for City’s second.

Moments later Torres had a finish chalked off for offside after the ball hit him via Jesus. If this was a relief for Burnley, City’s ascendancy continued. Mendy claimed 50-50s, Jesus dropped deep to join in, and De Bruyne probed. Guardiola was less content with Dias when the centre-back conceded a foul: three times he shouted “Ruben!” and three times the Portuguese chose to ignore his manager.

Yet City’s third brought only joy. The peerless De Bruyne dropped a dipping cross from the right into Mendy at the far post and the Frenchman volleyed home superbly for a first for the club. The period ended with Jesus skating past Ben Mee and letting fly from a tight angle: he missed but City were in cruise control.

Dias began the second half with another error by ceding the ball, though after Ashley Westwood spooned wide, Guardiola was this time quiet. Next came a sweet move: Mendy, De Bruyne and Torres swapped passes before a final one went to Mahrez. He swung his wand of a left foot through the ball but over it went.

One moment summed up how superior the home team was: De Bruyne was found around halfway wide on the left and, with nothing apparently on, he decided to drop a shoulder and take off on a surge that took him clear and close to Burnley’s area, the Belgian scattering opponents around him.

Still, Dyche’s men were not yet for dropping heads. Jay Rodriguez forced a first save from Ederson and when the ball broke a Jesus high boot fouled Ashley Westwood and the visitors had a free-kick in the D. Josh Benson hit this and it deflected off the wall for a corner with Ederson stranded.

City’s fourth derived from a scintillating sequence. Fernandinho, on for Rodri at the break, fed Mahrez along the right, he passed to an overlapping Walker, his ball in was controlled and relayed expertly by Jesus to Torres, and he beat Peacock-Farrell. Now Foden came on for the Spaniard and the fifth soon ensued. 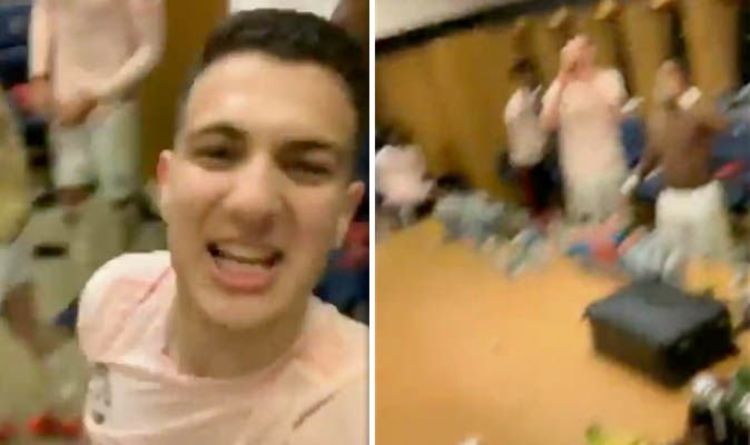 Dalot can be seen leading the chants of “United, United…” as Ole Gunnar Solskjaer’s squad celebrate the unlikeliest of Champions League comebacks. […] The Boomers did it again at the death, ousting France 100-98 to remain unbeaten and avoid the United States as they shoot […]