A key measure in the Victorian budget is a new jobs tax credit to encourage businesses to hire new staff.

The $880m scheme will provide businesses with a payroll of $10m or less with a non-refundable credit of $0.10 on every dollar spent on wages above the previous year’s wage bill. Effectively, businesses will get 10% back on new wages, which Pallas said would effectively reduce, or in some cases completely remove, their payroll tax bill.

The government will also reduce the land transfer duty — stamp duty— on houses worth $1m or less and purchased between now and 30 June, 2021. New builds will get a 50% reduction, existing homes a 25% reduction.

There’s also a 50% land tax discount for new housing developments intended for renters and a $500m Victorian Homebuyer Fund, which will see the government contribute to the purchase price of a new home in exchange for a slice of the equity.

The Victorian government has forecast a record deficit of $23.3bn and a massive increase to net debt to cover the cost of a jobs and infrastructure program to help the state recover from Covid-19.

Gross state product is forecast to decline by 4% this financial year, in what the treasurer Tim Pallas told parliament was the biggest economic impact to the state in nearly a century.

Pallas is delivering his budget speech in the parliament now, and said “now is not the time to deliver a budget in surplus”.

“We are putting our credit rating to work when it’s needed most – to help Victorians now and into the future,” Pallas said. “We are borrowing to make the necessary investments to drive a quicker and stronger recovery.”

Thanks Elias. Luke Henriques-Gomes here. I’ll be with you into the evening.

First up, we’ll have some updates from Calla Wahlquist, who has been in the Victorian budget lock up.

I’ll be passing the blog over to my colleague Luke Henriques-Gomes who will take you through the afternoon and news from the Victorian budget.

Have a great afternoon, and now, over to you Luke.

The inspector general of intelligence and security, Jake Blight, has revealed Australia’s spy agencies collected data in the Covidsafe contact tracing app in the past seven months.

In his first report on the use of the data, Blight found Australia’s spy agencies had policies in place to ensure Covidsafe app data was not intentionally collected, but there had been “incidental collection in the course of lawful collection of other data” and that was permitted under the Privacy Act.

The data was not decrypted, accessed, or used by any agency.

Blight said Igis would have inspections in the next few months to ensure the data had been deleted, and none had been accessed.

The legislation brought in to secure the Covidsafe app means only the system administrator or health officials needing to access the data for contact tracing have access to its data.

Health officials in Victoria yesterday told a parliamentary inquiry that they had to stop using some of the data from the app at the peak of the second wave because it was unclear whether under the legislation health officials from other states who were helping Victoria with contact tracing were allowed to use the data.

But it was only for a short period and as has been previously reported Victoria has not been able to identify any close contacts through data in the app that were not already identified through manual contact tracing, despite downloading data from more than 1,800 people’s devices.

You shouldn’t be surprised to learn that Pauline Hanson – she of the “I didn’t flip-flop, I said no originally, then I said yes. Then I have said no, and I’ve stuck to it” fame – is attempting to cover off all sides of the superannuation debate.

The One Nation leader supports a 0.5% increase to the super compulsory rate, but only if people don’t cash it all out and spend it on Landcruisers and caravans.

If they do, then she wants the whole super scheme clarified.

And if it turns out you can cash it out, then maybe a wage increase would be better.

“While the money belongs to the employee, it wasn’t designed to be cashed out as a lump sum and blown, only to leave a person on a government pension for the rest of their lives,” she said.

“People should not be encouraged to squander their superannuation. It defeats the purpose of the scheme.

“If we don’t reclarify the purpose of superannuation now, we might as well just give these increases to people through their pay packets.”

Everyone clear? Yup. It’s a bet both ways. Which is standard for One Nation.

Sir Michael Fallon, a former British defence secretary, asked Scott Morrison how it would be possible to persuade China that it would be in its own interests to abide by the Law of the Sea Convention and independent rulings on its South China Sea claims.

Morrison said this was “the $64,000 question, really”. It was very difficult to “understand the mind of China and their outlook, but it is our task to seek to do so”.


Of course, there are tensions. I won’t deny that. But I do feel that many of the tensions are based on some misunderstandings. And I think one of the key misunderstandings is a level of confidence about what we see is the end result.

Our end result from Australia’s point of view as I said, is not containment. Our end result is happy coexistence, respecting each other’s sovereignty and systems and being able to happily coexist in a mutually beneficial relationship.

And I believe that’s where both parties of this relationship have a lot more work to do to get to that shared understanding of what we see the ultimate goal as being.

Morrison suggested the incoming Biden administration may have an impact on the Washington/Beijing ties: “Perhaps the atmospherics of that relationship will change following the most recent election.”

Scott Morrison: Australia will be ‘patient’ and ‘consistent’ with China

Scott Morrison says his government will remain “patient” and “consistent” as it seeks to navigate the current tensions with China.

The Q&A portion of the prime minister’s virtual appearance at a British thinktank event last night has arrived in journalists’ inboxes.

As reported by Katharine Murphy overnight, Morrison called on major powers such as the US and China to try not to force their allies and partners into binary choices, as middle powers like Australia needed some more latitude or “room to move”.

Morrison took a few questions after his Policy Exchange speech, including from Tom Tugendhat, the chair of the UK House of Commons foreign affairs select committee, who asked about how Morrison saw the UK’s role in working with Australia, Japan, India and others in defending the international order.

Morrison claimed Australia’s policies when it comes to the rules-based order and the Indo-Pacific “are no different today than they were in John Howard’s time” – although he suggested there were “some things that have changed, of course, to our north”.

Alluding to this year’s trade actions by China, Morrison said all countries should take seriously their obligations to comply with the letter and the spirit of World Trade Organization rules “because that’s what makes it all hang together”.

“We’ve just got to be patient about this, and we just need to be consistent in holding to these positions and pursuing them in a way that seeks to get to where we all want to be at the end of the day.”

The aim was to ensure countries in the Indo-Pacific could freely trade and enjoy economic growth and prosperity.

China’s advance was “good” and it was not the objective of Australia or other regional players to contain China economically. It was important to be as clear in delivering that message as possible, including in partnership with like-minded countries like the UK.

Health minister Greg Hunt spoke in between those press conferences from Queensland and South Australia and announced there are no Australians requiring ventilation for Covid-19.

Hunt was speaking at ResMed, a ventilator manufacturer in Sydney, which had been working to boost Australia’s supply since concerns at the beginning of the pandemic there would not be enough ventilators for Australians.

Hunt was also asked about vaccines, and revealed all is on track for the first cohort of Australians to begin receiving a vaccine by March next year.

South Australian chief health officer Nicola Spurrier has said she hasn’t “popped the cork on the champagne bottle yet but the champagne is on ice” as the state announced one new Covid-19 case on Tuesday.

Spurrier said the case is a close contact of a returned traveller who previously tested positive.

It is a man in his 20s who is in a quarantine hotel, but it is unclear if he is a returned traveller or if this was locally acquired.

Guardian Australia contacted SA Health to clarify this, but it was unable to provide more information.

Spurrier said there are 27 cases linked to the Parafield cluster, and 39 active cases in SA.

There is one person in hospital, a woman in her 50s. A 30-year-old man was recently discharged from hospital.

“I haven’t popped the cork on the champagne bottle yet but the champagne is on ice. We haven’t finished the job yet and every South Australian still has their part to play,” Spurrier said.

She also urged South Australians to begin wearing masks, even as restrictions eased. 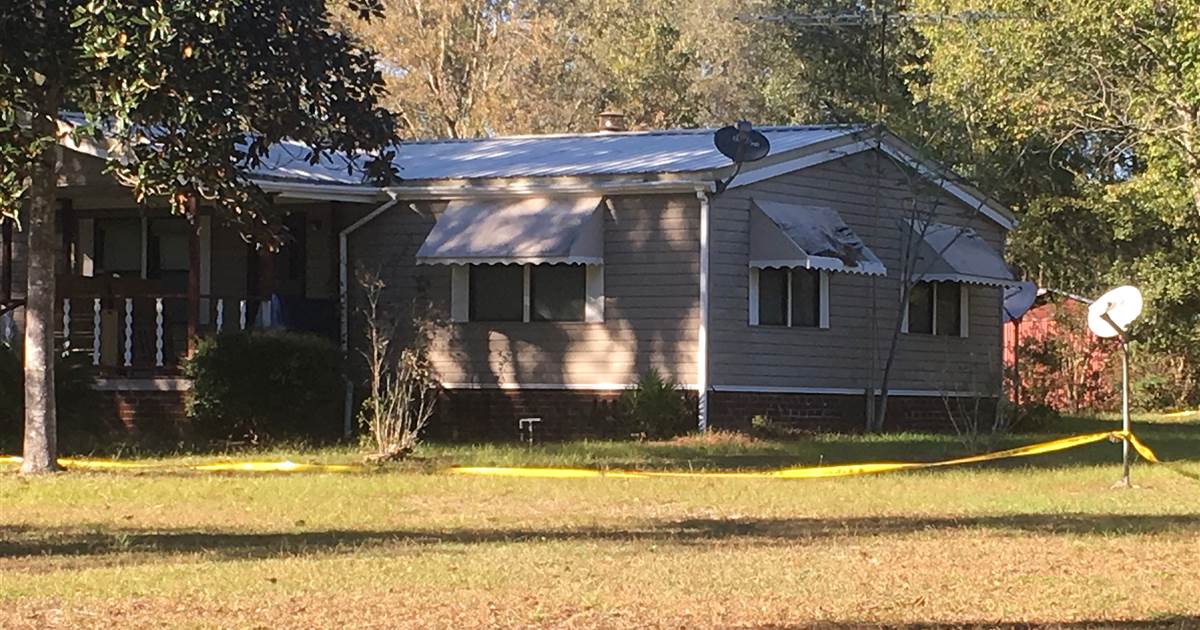 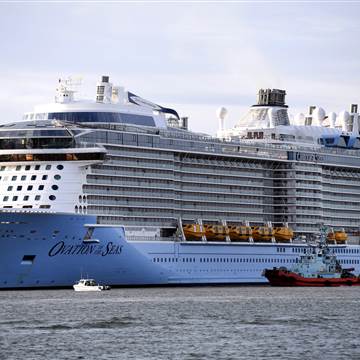 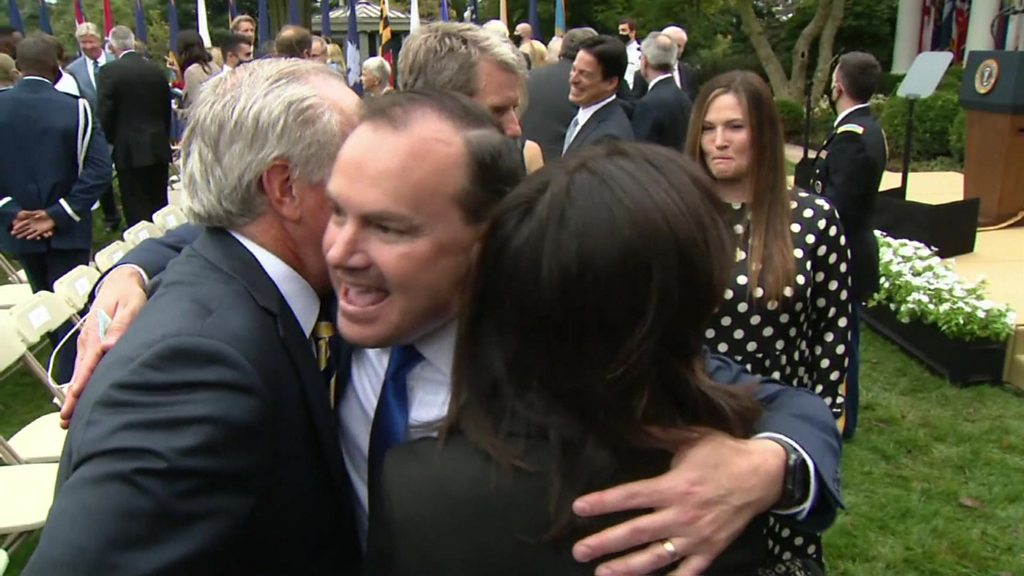 Media playback is unsupported on your device Media captionSenator Mike Lee, who later tested positive for Covid-19, seen hugging other attendees US […] 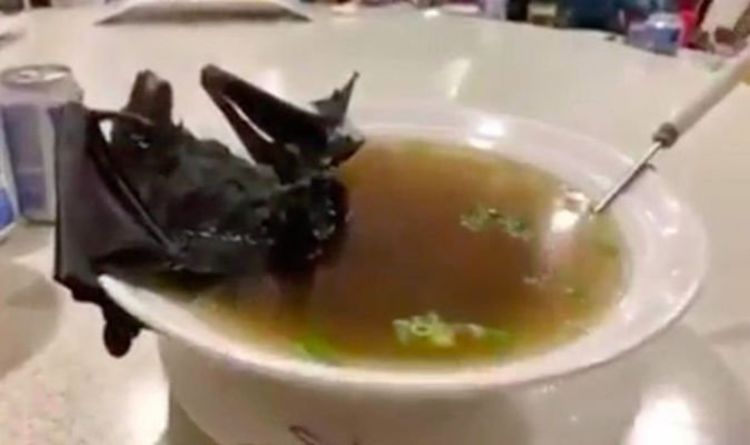 Experts believe fruit bats which feature in the local delicacy could host the flu-like virus which has now spread to humans. Most […]