Like the best autobiographers, Barack Obama writes about himself in the hope of discovering who or even what he is. It’s a paradoxical project for a man who is universally known and idolised, but this uncertainty or insecurity is his motivating force and his most endearing quality. Born to a father from Kenya and a mother from Kansas, brought up in Indonesia and Hawaii, educated in California and New York, he has a plural personality. His mother anglicised his given name by calling him Barry, though he liked to pretend that it was a tribal epithet that identified him as a chieftain. As a candidate for the Senate, he admitted that he was “improbable”; campaigning for the presidency, he revised the adjective to “audacious”. Now, in this searchingly introspective account of his first presidential term, he divests himself of the “power and pomp” of office, disassembles the “ill-fitting parts” that make him up and ponders his similarity to “a platypus or some imaginary beast”, unsure of its dwindling habitat.

The book, he says, was written by hand, because he mistrusts the smooth gloss of a digital text: he wants to expose “half-baked thoughts”, to scrutinise the first drafts of a person. He mistrusts his own eloquence as an orator, even though it “taps into some collective spirit” and leaves him with a “sugar high”. Hunched at his desk, he has to renounce those winged words and submit to a more reflective self-interrogation. “Is it worth it?”his wife, Michelle, demands as his political ambition upends their placid family life. “When is it going to be enough?” she asks later. Obama, glimpsing himself through her eyes as “this strange guy with a scruffy wardrobe and crazy dreams”, is not sure how to answer. After his election to the Senate, a reporter deferentially inquires: “What do you consider your place in history?”, to which Obama replies with incredulous laughter. Told that he has been awarded the Nobel peace prize, he addresses the question more probingly to himself: “For what?” he says.

Success intensifies Obama’s suspicion that he is an impostor: the crowds at his rallies diminish him rather than causing his ego to balloon, because he knows they are not “seeing me, with all my quirks and shortcomings”. He resists “the continuing elevation of me as a symbol”, because he knows that this hero-worship is a betrayal of his conviction that “change involves ‘we’, not ‘me’”. To disabuse us, illicit glimpses of the private man are permitted. At one point, he guiltily skulks on the back porch of a Chicago apartment to smoke while watching raccoons, indulging a “foul habit” of their own, forage through his household’s rubbish bins. Much more painfully, he feels “a great shame” when a political campaign keeps him from his mother’s deathbed.

Even his idealism is assessed as a character flaw. “I got lost in my head,” Obama says of his student days, while in the White House he is “trapped in my own high-mindedness”. Feeling somehow intellectually disembodied, he is warmed by Hillary Clinton’s “good, hearty laugh” and he explains that he chose the chatty, convivial Biden as his running mate because “most of all, Joe had heart”. Obama’s plaintive substitute for Biden’s glad-handing is a collection of amulets presented to him by voters – a Las Vegas poker chip given to him by an Iowa biker; a heart of pink glass from a blind girl in New Hampshire; a silver cross from an Ohio nun.

‘His solace’: the Obamas board Air Force One in Chicago, November 2012. Photograph: Jewel Samad/AFP/Getty Images

Despite these tactile reminders, his inauguration begins a stealthy, mortifying process that leaves him feeling depersonalised, numbly estranged from those who placed their trust in him. Cleared of traffic so that his armoured limo can cruise unimpeded, city streets become ghostly. His wardrobe at the White House tidies him out of existence: the socks and shorts of this incorrigibly messy man are “folded and sorted as if in a department store display”. Aides mechanise the body language of the new commander-in-chief by teaching him to “deliver a proper salute”, with elbow jutting out at a dramatic angle and fingertips tightly clenched at his eyebrow. The simplest physical act – a signature, for instance – now requires forethought. When signing legislation, he has to use a different pen for every letter of his name, so that the monogrammed implements can be distributed as souvenirs. Sending personal condolences to the families of fallen service members, he takes extra care, “careful not to smudge the heavy beige paper with my left-handed sideways grip”, miserably aware that his autograph can never console the addressees of the letter for their loss.

To some of his followers, Obama’s election was the fulfilment of a biblical prophecy. A pastor who fought for civil rights in the 1960s says: “We are the Moses generation” and adds that “you, Barack, are part of the Joshua generation”; after the deliverance from bondage, Obama now needed to conquer Canaan. Unsurprisingly, such expectations leave him quaking with self-doubt, terrified by a sense of inadequacy. It doesn’t help to be told by Václav Havel, another liberator, that those he has inspired are bound to lapse into disillusionment. Politics, which Obama sniffs at as a retail trade, comes increasingly to dismay or disgust him and he wonders whether his “selfless dream of changing the world” is no more than a reflex of pushy conceit. His actions in office tend to be provoked by twinges of conscience. “I felt their hardship as a rebuke,” he says of his impoverished Chicago constituents; his trips to a military hospital to visit amputees or victims of roadside bombings evacuated from Afghanistan are “a necessary penance”.

Through all this, his solace is his family. As a gawky, dreamy adolescent, he was “a Don Quixote with no Sancho Panza”. In Michelle he found both his Sancho Panza and his Esmeralda – a grounded truth-teller but also an object of adoration, possessing a “higher power” than that of the presidential veto. Her fond, humorous interventions are a delight. When his daughters, Malia and Sasha, complain on an outing to the zoo that Obama has become too recognisable for comfort, Michelle says that any disguise will involve an operation to pin back his ears. During a summit in Moscow, the girls chatter about a day spent visiting dancers and doll-makers; Michelle tells them to moderate their glee, because “your father’s not allowed to have fun – he has to sit in boring meetings all day”.

Off duty, the prosaic aridity of Obama’s legislative travails and diplomatic wrangling relaxes into poetry, as he remembers “wriggling Malia into her first ballet tights” or “watching baby Sasha laugh as I nibbled her feet” and, above all, “listening to Michelle’s breath slow, her head resting against my shoulder as she drifted off to sleep”. He is solemnly lyrical in his account of the permanently illuminated Oval Office, luminescent throughout the night “like a lighthouse’s rounded torch”. But he is even more tenderly appreciative of the seasonal flora in the White House gardens and there’s a Wordsworthian gravity in his exchanges with the elderly groundsmen, “the quiet priests of a good and solemn order”.

Gradually, however, a sobering philosophical change overtakes him. On his travels, he notices everywhere the decay of empires and worries that the imperial swank of the American presidency will soon crumble. A private tour of the pyramids reminds him, like Hamlet’s colloquy with the gravediggers, that “I and those I loved would someday turn to dust”; on a stroll along the Great Wall, he tells his bodyguard about the internal strife that toppled the Ming dynasty and made a mockery of that bulwark; meetings with Putin cause him to realise only “fear and fatalism” shelter Russians from “a frigid landscape that forgave nothing”. Most alarming of all is his preview of doom when he drives through a Louisiana swamp to inspect the oil spill after the blowout of BP’s Deepwater well: engineering is helpless against “the ocean and the mighty river that emptied into it”. Such long-sighted pessimism overshadows his inauguration, when he remembers the swearing-in of George Washington in 1789. After taking the oath, Obama says, “the Father of Our Country was free to get on with the business of making sure that America outlasted his tenure”. Hasn’t that been the anxious task of all Washington’s successors, at least until the present incumbent, who seems to want the republic to predecease him?

At the book’s taut, thrillingly narrated climax, Obama vanquishes two enemies over a single weekend. He sends out a team of commandos to kill Osama bin Laden in Pakistan, while in an after-dinner speech in Washington he ridicules Trump, who was then peddling a calumny that suggested Obama may have been born outside the US, which would have made him ineligible to be president. Triumphal rejoicing over Bin Laden’s corpse is not permitted. Instead Obama, who once exultantly caught and killed a fly during a television interview, ruefully muses that he could summon a sense of common purpose when executing a terrorist but not when passing healthcare reform. He allows himself to enjoy Trump’s writhing discomfort at the dinner, then has to admit that Trump “was a spectacle and that was a form of power”.

The view ahead, to be covered in the second volume of this memoir, is inauspicious and it confirms Obama’s demoralising suggestion that no individual, however gifted with charisma or grace, can prevail for long against what he calls “dark spirits”. His politics always depended on a “community of faith”, a sacred sociology that upheld faith in the idea of community. Trump has preferred to pick at the fault lines of society so as to foment internecine warfare and the promised land is now stricken with pestilence.

• A Promised Land by Barack Obama is published by Viking (£35). To order a copy go to guardianbookshop.com. Delivery charges may apply 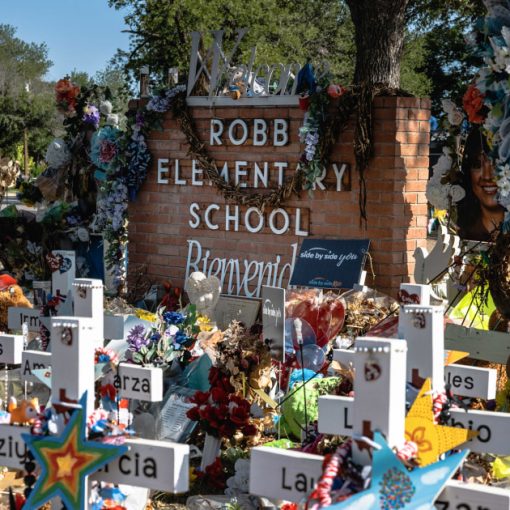 AUSTIN, Texas — The Texas Department of Public Safety fired an officer Friday who was at the scene of the Uvalde school massacre and […]

It is the new space mission that will show us the Sun as we’ve never been able to see it before. The […]