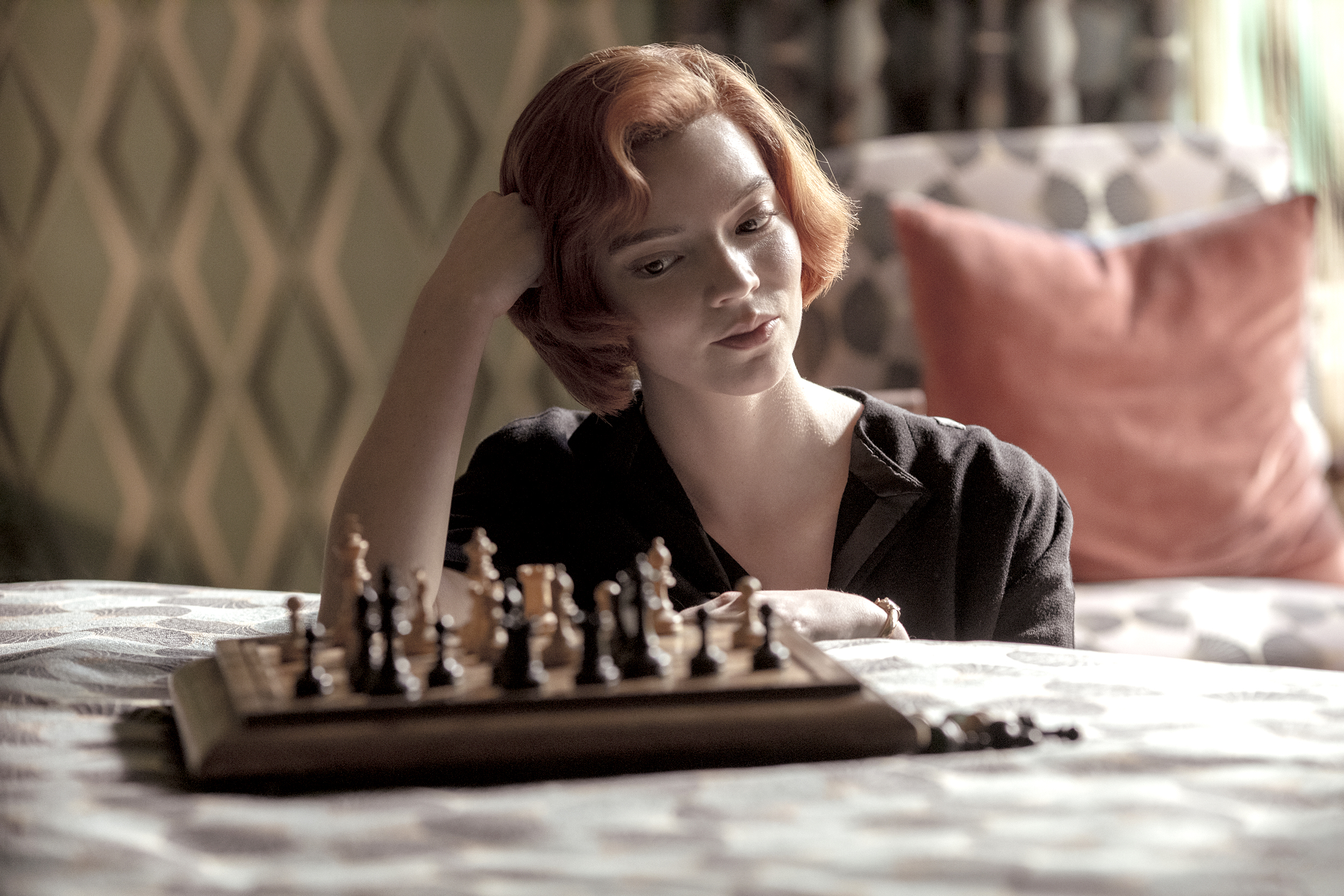 Netflix’s new chess champion mini-series “The Queen’s Gambit” is a classic Cold War beat-the-Russians sports story. It follows the usual narrative, in which a precocious, mercurial U.S. individualist challenges the bureaucratic Soviet Union hive mind. But it also questions those tropes and American exceptionalism in general.

Ultimately, it’s a story about learning from, rather than defeating, one another. The pieces on its board move toward a hopeful, collaborative endgame, which isn’t quite convincing in our current moment but is welcome nonetheless.

Ultimately, it’s a story about learning from, rather than defeating, one another.

Based on the 1983 novel by Walter Tevis, “Queen’s Gambit” tells the story of Beth Harmon (Anya Taylor-Joy), a young girl whose mother dies in a car crash when she is 8 years old. Placed in an orphanage, she discovers the janitor playing chess in the basement and under his reluctant — and later, astounded — tutelage, reveals herself to be a prodigy. She also, less happily, becomes addicted to the tranquilizers the home uses to keep the children docile.

After she is adopted by Alma Wheatley (Marielle Heller), Beth begins to enter tournaments and becomes nationally and internationally famous for her intuitive play and blazing attacks. Her victories eventually gain her entry to competitions in Paris and Moscow, though alcoholism threatens to derail her career.

Taylor-Joy does a fine job of portraying Beth’s shyness, insecurity and preternatural self-containment — she’s awkward both because she’s uncertain of herself and because she’s almost impossibly sure of her passion and skill. Beth speaks like she plays chess: in sharp, incisive bursts designed to sweep her opponents from the board. She’s a cold, isolated genius who does her best chess preparation alone in bed, imagining a chess board on the ceiling, moving the pieces with her mind through infinite combinations until she finds that path to victory.

The Soviets’ national chess strategy is a stark contrast to Beth’s individual interiority. The Russians work as a team, Beth learns. Teammates go over games together — with state support. National U.S. tournaments are held in drab college auditoriums, with little fanfare or interest. In Russia, Beth is told with some wonder, they pay people to pay chess.

It would be easy for the series to present Russia’s collectivist approach as unfair or unsporting, in comparison with a purer American self-reliance. But “Queen’s Gambit” is bracingly uninterested in boilerplate anti-Communism. The Christian orphanage, with its moralistic punishments and hypocritical drugs, is as blankly, institutionally oppressive as anything we see in Russia. In part because of her miserable experiences in the home, Beth refuses to denounce Marxist atheism at the behest of her charitable benefactors. By the same token, the show refuses to denounce the Soviets’ collective tactics.

Instead, the series presents Beth’s isolation as a weakness that she needs to overcome and Soviet bureaucratic book chess as a skill she needs to assimilate. Two of the American opponents she defeats offer to help train her. Though she’s spiky and resentful at first, she ultimately gains a lot from those relationships, as she’s forced to memorize endgame strategies and go over every game world champion Vasily Borgov (Marcin Dorocinski) has ever played. Nor is it just chess where friendship is valuable: When Beth falls into the bottle, she needs an old companion from the orphanage, Jolene (Moses Ingram), to help her crawl out.

Chess is a game you play to win, and Beth loves to win with a fierce passion superseded only by her hatred of losing. But chess is also an art, or a kind of music you make together. Viewed across the chessboard, Russia isn’t an implacable rival, but a worthy opponent and a country where the game Beth loves is loved as it should be.

Obviously the Soviet Union was a miserable place in many respects — when he travels in the U.S., Russian champion Borgov has to be accompanied by KGB men who are there in part to make sure he doesn’t defect. “Queen’s Gambit” isn’t meant as a concrete game plan for fixing United States-Russia relations. But it does express a faith that competition can lead to learning and respect, rather than extermination.

Now that the Cold War is over and we’re facing somewhat different problems, even the tentative superpower reconciliation presented in “Queen’s Gambit” feels a little like a solution to someone else’s chess problem — elegant, pleasing, but not precisely relevant. The endgame the narrative is trying to win never developed that way, and the current high-level gambits between the U.S. and Russia have not been universally successful. Still, the moves in “Queen’s Gambit” are lovely in themselves, like a combination Beth played through on her ceiling with brilliance, skill and grace, but which never made it to the board.

Trump could run AGAIN in 2024 – and may want a THIRD term, claims new book

Where do I vote? How to find your polling place for Election Day 2020