Gunfire has erupted and jailbreaks have been reported in Nigeria, as unrest over the shooting of protesters in its biggest city continues.

The protests began about two weeks ago with mostly young people demanding the disbandment of a notorious police unit.

The Special Anti-Robbery Squad (Sars), which had been at the centre of protests against police brutality, was dissolved on 11 October.

Using the hashtag #EndSars, protesters rallied crowds to the streets.

The shooting has spurred global calls for those responsible to be held to account.

Lagos and other parts of Nigeria have seen buildings torched, shopping centres looted and prisons attacked since the shooting.

The state government in Lagos imposed an indefinite round-the-clock curfew on the coastal city’s 20 million inhabitants on Tuesday evening.

Other states have taken similar action, including Anambra, which ordered a 24-hour curfew on Thursday.

Earlier this year, Amnesty said it had documented at least 82 cases of torture, ill treatment and extra-judicial execution between January 2017 and May this year against members of Sars.

Nigerian President Muhammadu Buhari disbanded Sars on 11 October. But protests have continued, morphing into demands for wider reforms to the police and the government.

What’s the latest on the unrest?

Gunshots were heard at the Ikoyi prison in Lagos after an attempted prison break was foiled by the army and the police on Thursday. Inmates are reported to have escaped from other prisons after attacks in the states of Ondo and Delta.

A BBC reporter also heard gunshots in the Surulere area of Lagos and saw tyres burning.

In the suburb of Lekki, a few miles from the toll gate where Tuesday’s shooting happened, another journalist posted a video of a popular shopping centre ablaze.

The High Court on Lagos island, the city’s oldest neighbourhood, was also set ablaze on Wednesday.

Residents said the building was looted by vandals who took away goods that had been confiscated by the court, and that the blaze lasted long into the night.

A major Nigerian TV station with links to a ruling party politician was also torched, while the palace of the most senior traditional leader in Lagos was ransacked.

What did the vice-president say?

In a series of tweets, Vice-President Yemi Osinbajo did not confirm that the security forces had shot dead protesters on Tuesday.

Instead, he said that his “heart goes out to all the victims of the Lekki shootings, and also the policemen and all other men and women who lost their lives in the past few days in different parts of Lagos and other states”.

“I spoke to some of those in hospital. The pain of these terrible events is palpable in our towns and cities, and some losses are irreplaceable, but we can and will get justice for all of them,” he said.

Earlier, Lagos State Governor Babajide Sanwo-Olu said that about 25 people had been wounded in an “unfortunate shooting incident”, and one man had died by “blunt force trauma to the head”.

“I cannot say actually who is involved in the shooting. There could be some miscreants who are having guns, shooting people here and there,” he said.

That account is disputed by Amnesty and multiple eyewitnesses, who say uniformed men opened fire on a crowd of around 1,000 demonstrators.

Amnesty International Nigeria said 10 of the 12 people killed on Tuesday were at the Lekki toll gate.

Evidence from hospital records and witnesses showed “the Nigerian military opened fire on thousands of people who were peacefully calling for good governance and an end to police brutality” at the toll gate, Amnesty added.

President Buhari, who is facing calls to resign from protesters, has yet to comment directly on the shooting.

Mr Buhari was holding talks with his defence chiefs at a meeting of the national security council on Thursday.

What international reaction has there been?

Calls have grown for the Nigerian government to end the violence and investigate Tuesday’s events, which have caused concern internationally.

The African Union on Thursday urged “all political and social actors to reject the use of violence and respect human rights and the rule of law”.

The United Nations, the European Union, the UK and the US have all called for those responsible for the killings to be held responsible.

I am deeply concerned by the violence in Nigeria, including widespread reports of civilian deaths. We call for an end to all violence. The Nigerian government must urgently investigate reports of brutality by its security forces and hold those responsible to account.

The UN High Commissioner for Human Rights, Michelle Bachelet, said reports that lights were turned off and CCTV cameras removed at the scene before the attack suggested it was “premeditated, planned and coordinated”.

The US said it welcomed an “immediate investigation into any use of excessive force by members of the security forces”.

“Those involved should be held to account in accordance with Nigerian law,” US Secretary of State Mike Pompeo said in a statement on Thursday.

As well as diplomats, celebrities – from Manchester United striker Odion Ighalo to pop singer Beyonce Knowles – have also added their voices to the calls for justice.

A Georgian TV cameraman has died after being badly beaten by far-right assailants during a protest against an LGBTQ Pride march, his […] 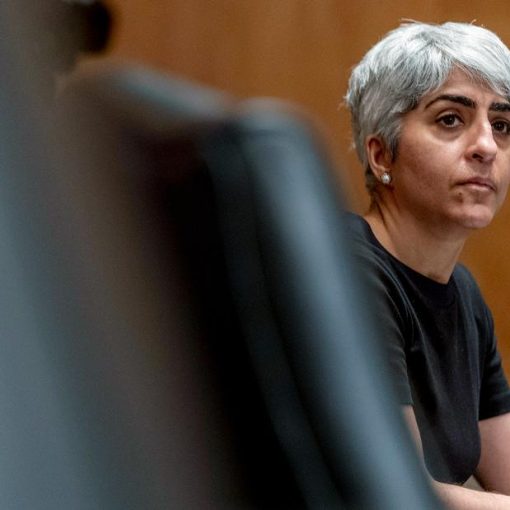 GOP Sen. Josh Hawley of Missouri has placed a hold on Kiran Ahuja’s nomination to lead the federal personnel agency “because of […]