LeBron James finally got an easy Game 1 in the NBA finals.

A very easy one, at that.

Anthony Davis scored 34 points in his finals debut, James had 25 points, 13 rebounds and nine assists and the Los Angeles Lakers rolled past the Miami Heat 116-98 on Wednesday night.

The Heat left beaten and battered.

Kentavious Caldwell-Pope scored 13 points, Danny Green had 11 and Alex Caruso finished with 10 for the Lakers. They returned to the finals for the first time in a decade and sent a very clear message. James’ teams had been 1-8 in Game 1 of past finals, with losses in each of the last seven openers.

“We kind of picked it up on both ends of the floor,” Davis said.

Kendrick Nunn scored 18 points for the Heat, Tyler Herro had 14 and Jae Crowder 12. Adebayo was held to eight points in 21 minutes, and Miami went with subs for a fourth-quarter burst that turned a total rout into something only slightly more palatable in terms of final margin.

The Lakers did whatever they wanted. They outrebounded Miami 54-36, led by as many as 32 points, and made 15 three-pointers – a big number for a team that doesn’t necessarily count on piling up that many points from beyond the arc. They’re 21-3 this season when making at least 14 threes.

The only stretch that provided hope for Miami came in the first six minutes. The Heat scored on six consecutive possessions in what became a 13-0 run to take a 23-10 lead midway through the opening period.

So, the first six minutes were fine for Miami.

Everything else was all Lakers.

The simplest way to sum up what happened over the rest of the opening half is this: Lakers 55, Heat 25. The Lakers came into Game 1 ranked 21st out of the 22 teams that spent time in the bubble from three-point range, making only 33.6% of their tries from deep at Disney. They were the only team in the postseason to have two games shooting less than 25% on threes.

Perhaps they were due. The Lakers went 9-for-11 on threes in the final 16 minutes of the first half. Of the nine Lakers who played in the first two quarters, eight tried a three-pointer and all eight made at least one.

And if things weren’t already bad enough for Miami, the Heat determined at the half that Dragic playing in his first finals game couldn’t keep going in Game 1 because of a left foot injury.

The Lakers started the third on another run, this one 18-3, and the rout was officially underway.

Simona Halep played a near-flawless final on Saturday to become the first Romanian to win a Wimbledon singles title. Her 6-2, 6-2 win wrecked Serena […] 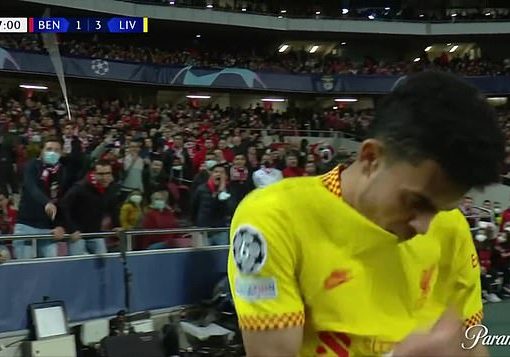 Liverpool star Luis Diaz has a STICK hurled towards him by a Benfica fan as he celebrates scoring the Reds’ third goal, […]

The hands-down winner of Super Bowl halftime was the teen the internet immediately dubbed ‘selfie kid’, who somehow managed to steal some […]

There is a maxim in modern, systemic approaches to leading organisations through change: “They say that, if you’re not part of the […]