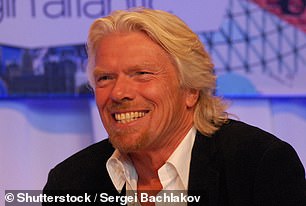 The British tycoon has proposed a so-called special purpose acquisition vehicle – or ‘spac’ – that would hunt for attractive businesses that can be bought for bargain prices in the wake of the pandemic.

The venture will look at firms in sectors Virgin already operates in, such as travel, leisure, financial services and fitness, according to regulatory filings.

Spacs, which have gained popularity in recent months, are billed as a way for companies to list on the stock market without having to go through the usual regulatory process.

They act as listed shell companies which private companies are then reversed into.

Branson’s firm, named VG Acquisition, is registered in the Cayman Islands and would aim to raise £309million ($400million) from investors.

It would have two years to spend the money or return it.

Supermarket Asda plans to hire out space to other shops

UK economy at risk of double-dip

Can you really lose weight by eating MORE?

I voted for a guy named Trump, Trump says