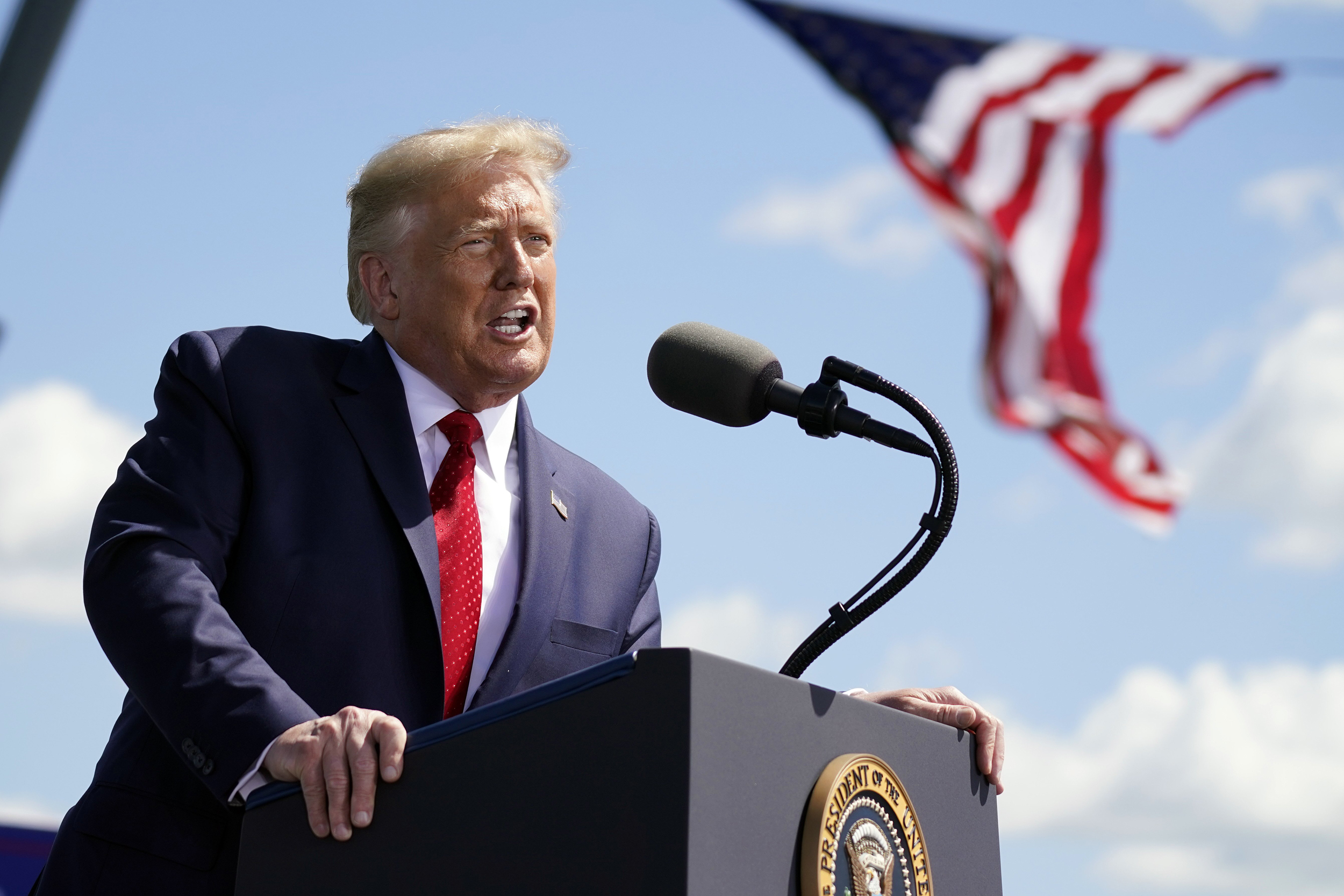 DULUTH, Minn. — When Norman Johnson started working as a miner on Minnesota’s Iron Range in the 1970s, he kept his conservative political views to himself. By the time he retired this summer, he felt comfortable passing out Trump bumper stickers to co-workers and putting campaign signs in his front yard.

“For a long time, you were hard pressed to find a Republican. Now they’re all over the place,” said Johnson, 65.

If Trump can flip Minnesota, he could lose Michigan, Wisconsin and Pennsylvania to Joe Biden and still get re-elected if he holds the rest of his 2016 victories.

Trump set his sights on winning Minnesota after he lost the state in 2016 to Hillary Clinton by just 45,000 votes, or 1.5 percentage points — an unexpectedly close finish, because neither campaign invested resources in the state.

The Iron Range, a mostly rural region bordering Lake Superior where massive iron mines serve as the region’s economic backbone and fuel much of the country’s steel production, was a Trump stronghold in 2016, and it has benefited from his trade policy. One of the only U.S. House seats to flip from Democratic to Republican control in 2018 was the district that includes the Iron Range.

Republicans see the Range and the rest of rural Minnesota as critical to the president’s success there.

The day after he accepted his party’s nomination, Vice President Mike Pence visited Duluth, the largest city in the region, to accept endorsements from six Iron Range mayors. Bob Vlaisavljevich, a lifelong Democrat and the mayor of the small mining town of Eveleth, spoke at the Republican National Convention.

Last week, Donald Trump Jr. campaigned in Duluth, and the president is expected to visit the Iron Range before the November election.

Trump will have his work cut out for him.

The state’s urban center has been trending blue, having elected one of Congress’ most liberal members, Democratic Rep. Ilhan Omar, in 2018. No Republican has won statewide since 2006. A recent poll conducted by The New York Times and Siena College showed Biden leading among likely voters in Minnesota by 9 percentage points.

Minneapolis became the center of anti-racism protesters after George Floyd, a Black man, died in police custody, a death viewed in a devastating video that sparked outrage around the world.

Johnson said he could imagine a time when Biden would have been a strong candidate in northeast Minnesota. But those days are gone.

“People here realize now Biden isn’t a moderate guy,” Johnson said. “It’s the environmentalists and, you know, people like Ilhan Omar that are the Democratic Party. That’s the party now.”

Trump has touted the Iron Range as one of his success stories.

“The Iron Range is back in business,” he declared in a speech in Minneapolis in October, pointing to his decisions to hit foreign-made steel with additional tariffs and his rollback of Obama-era environmental regulations that prohibited mining in certain parts of Minnesota.

In reality, however, the Iron Range continues to struggle.

When Johnson started working as a miner in the late 1970s, the industry employed about 15,000 people. That was at about the last time Minnesota voted for a Republican, when Richard Nixon swept the nation in 1972.

Around 10,000 jobs were permanently lost to automation in the 1980s. The steel industry’s slow decline continued over the next two decades. It employs just over 4,000 people today.

While iron ore exports increased in the first few years of Trump’s presidency, the industry slowed when the coronavirus pandemic hit, leading to layoffs and furloughs. Now, fewer mines are open than when Trump first took office.

“The reality of the situation is a little bit divorced from the way the issue is described in the political atmosphere,” said Aaron Brown, who teaches communications at Hibbing Community College on the Iron Range and writes a culture and political blog about the region. “It’s all about the story of there being this great economic rebirth in a rural place. The problem is there is no rebirth.”

‘The Range is moving’

The culture war, not the trade war, may account for Trump’s appeal in the region, political experts say.

“There’s a lot of resentment out there in the Iron Range,” said Cynthia Rugeley, a political science professor at the University of Minnesota Duluth.

Brown, whose family has lived on the Iron Range for five generations, said the cultural division between the state’s rural northeast and the urban south has intensified in recent years. Residents of the Iron Range perceive their influence in the state as slipping.

Referring to the Minneapolis-St. Paul region, Brown said: “That’s in part because the metro area has gotten so big — it’s half the state. And then there’s population loss and the shrinking political clout in the northeast. The Range is moving one way, but everything else is moving, too. Nothing is staying the same.”

In the past decade, the population of the Twin Cities metro area grew by about 9 percent, while the rest of Minnesota grew by just 3 percent, according to data from the U.S. Census Bureau. Some Iron Range counties, such as Koochiching, recorded some of the largest population losses in the state.

“They’re pandering to big cities,” said Jim Nelson, 37, a union nurse from outside Duluth, referring to Democrats. He supported Trump in 2016 and plans to vote for him again. “The Democrat Party is clinging to the urban areas.“

Luke Klingelhofer, 41, one of Nelson’s co-workers, voted for Barack Obama in 2008 but became disenchanted with Democrats and didn’t vote in 2012 or 2016. He now plans to support Trump in November.

“I don’t like how identity politics have become such a mainstay in the Democratic Party,” Klingelhofer said, lamenting that his workplace recently asked white employees to sign a pledge acknowledging their privilege and committing to stand up for people of color after the death of Floyd.

“It’s not that I’m against that or anything,” Klingelhofer clarified. “But I don’t like how it’s shoved in our face.”

The Trump campaign is quick to point out that in 2016 it had virtually no staff on the ground in Minnesota; his support there grew “organically,” it says.

This time around, the campaign has about 80 staffers in Minnesota.

“Minnesota was once considered a Democrat stronghold, but the historic enthusiasm behind President Trump, channeled through our campaign’s unprecedented ground game, has put the state in play,” said Nick Trainer, director of battleground strategy for the Trump campaign.

Rugeley, the professor in Duluth, said Trump campaign staff members were reaching out to her students last year to recruit them as volunteers, long before the Democrats had even settled on a candidate. Trump’s campaign said it continues to campaign door to door to reach voters while maintaining reasonable distance.

“In my time in politics here, I have never seen a deeper investment this early on by a Republican,” said Ken Martin, chairman of Minnesota’s Democratic-Farmer-Labor Party, which is part of the national Democratic Party.

As Trump ramps up his talk about flipping Minnesota, Democrats worry that Biden hasn’t paid the state enough attention. Biden will make his first trip to Minnesota on Friday. Trump will also campaign in the state Friday.

Still, some wonder whether Trump is trying to create the image that he could win despite insurmountable hurdles on the ground.

Trump’s campaign compares its strategy for winning Minnesota to the president’s success in Pennsylvania in 2016, when rural areas offset Clinton’s big margins in Philadelphia and Pittsburgh. But it’s unclear where those additional 45,000 voters will come from. Minnesota already has one of the highest voter turnout rates in the country.

“Trump is a little bit of a trophy collector,” Martin said. “The reality is for a Republican running for president, there would be no bigger trophy than Minnesota.”

Trump and his envoys have trashed Europe's confidence in the US. The damage might be irreparable

French villa close to Errol Flynn's home on the Cote d'Azur on sale for £6.2million

Eric Trump: President would concede election 'if he got blown out of the water' by Biden

Is Britain's coronavirus outbreak taking off again? Infections are up 48% in a week