The first of a £1billion nationwide network of more than 100 electric forecourts is nearing completion, with the bespoke location near Braintree in Essex due to be finished in November following delays caused by the coronavirus.

It will become the first custom-built charging station in the UK with 24 rapid chargers and 6 Tesla Superchargers on site to deliver up to 350kW of power to electric cars.

The powerful devices should replenish the batteries of the latest plug-in models in between 20 and 30 minutes – in which time drivers can head into a state-of-the-art building with shops including a Costa Coffee, WH Smith and Booths high-end supermarket.

The company behind the network, Gridserve, has revealed a number of new images showing the location taking shape ahead of the grand opening before the end of the year. 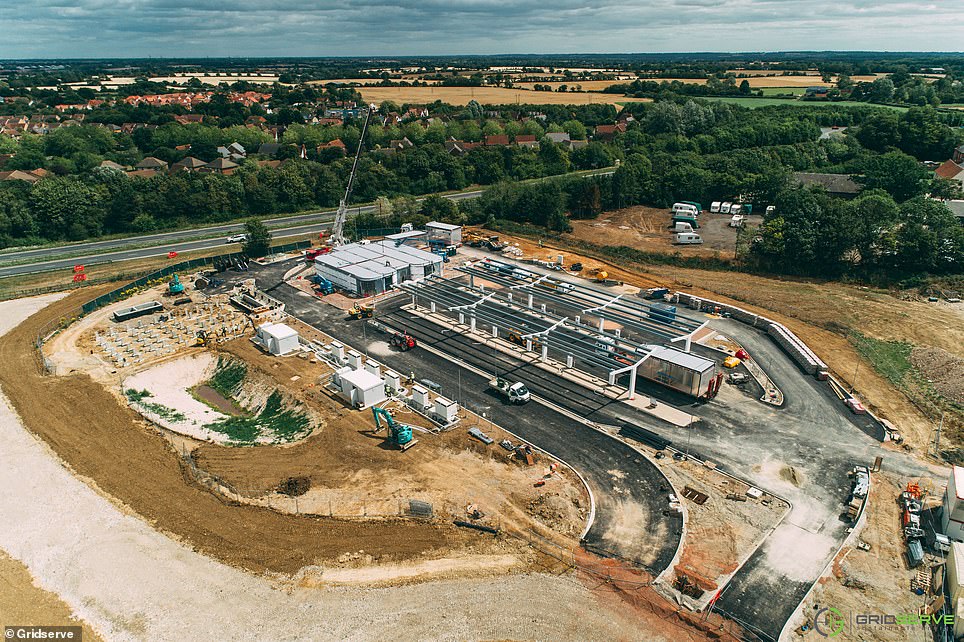 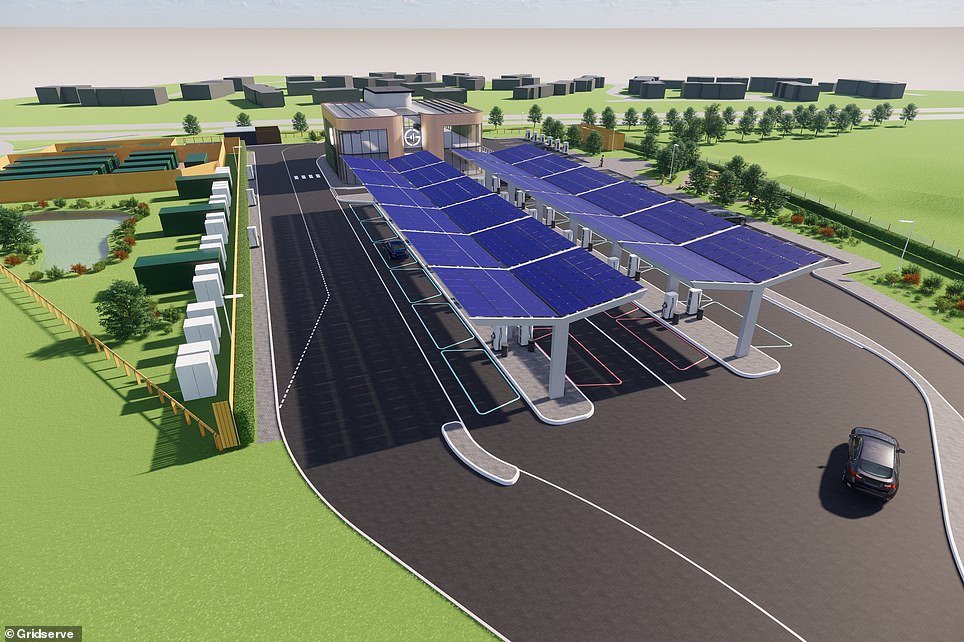 UK’s first electric forecourt takes shape: The nation’s first custom-built EV station with 30 on-site charging devices is due to open at the end of the year in Essex. Construction has been delayed due to the coronavirus pandemic but should be completed in November

It is currently undergoing construction at a 2.5-acre site adjacent to Great Notley, just off the A131, with links to Stansted Airport, Chelmsford, Colchester and the busy M11 motorway.

Of the 30 devices on site, 24 high power chargers – half of which can deliver up to 350kW of power – are provided by Swiss-Swedish technology giant ABB.

A further 6 Tesla Superchargers will be available specifically for Tesla vehicles, though Gridserve said it plans to have more of these at future sites to appease the demand for the popular US manufacturer’s cars in the UK. 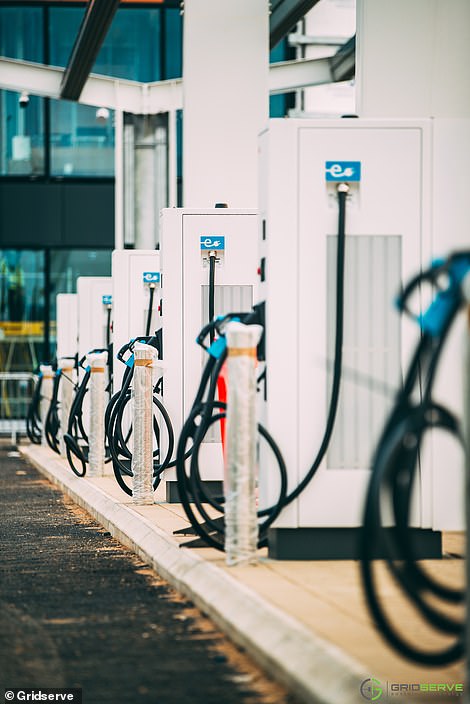 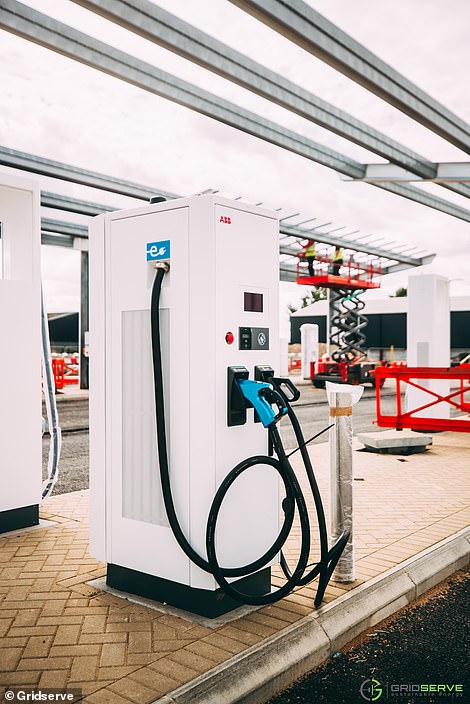 The site will have 30 rapid car chargers in total. Another 24 will be provided by ABB and provide charging for all EV models. There will also be 6 Tesla Superchargers dedicated to the brand’s models 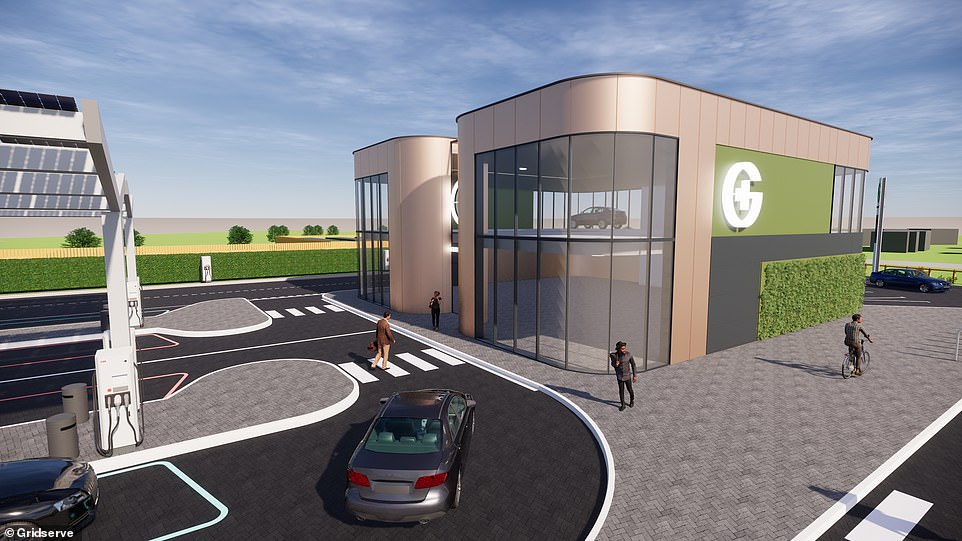 Each location will have a building on site for drivers to use for the 20 to 30 minutes their vehicles are charging. The Braintree store will be two storeys and have WH Smith and Costa Coffee on site

The project has been supported by a £4.86 million grant from Innovate UK, one of the largest awarded by the government agency last year and will also be financed by Hitachi Capital UK.

Gridserve has said this will be the first of a massive network of UK-wide locations that will be operational within five years.

The company has already secured exclusivity at 100 site, and planning applications for two additional forecourts in Uckfield and Norwich East have recently been submitted.

All forecourt destinations will be located on busy routes and near powerful grid connections close to towns, cities and major transport hubs. 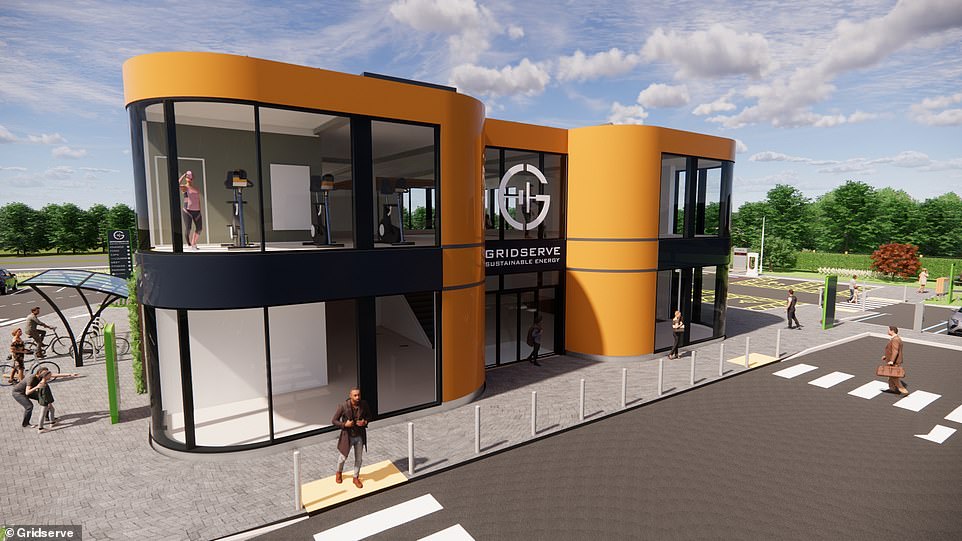 The Essex forecourt’s building will be state-of-the-art and have a waiting lounge, free superfast Wi-Fi, high-end washrooms and a dedicated kid’s area 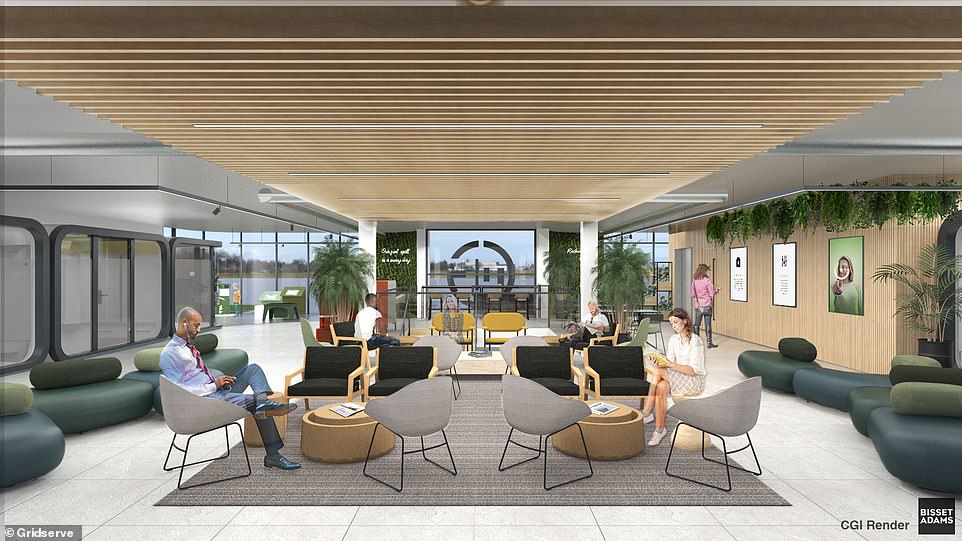 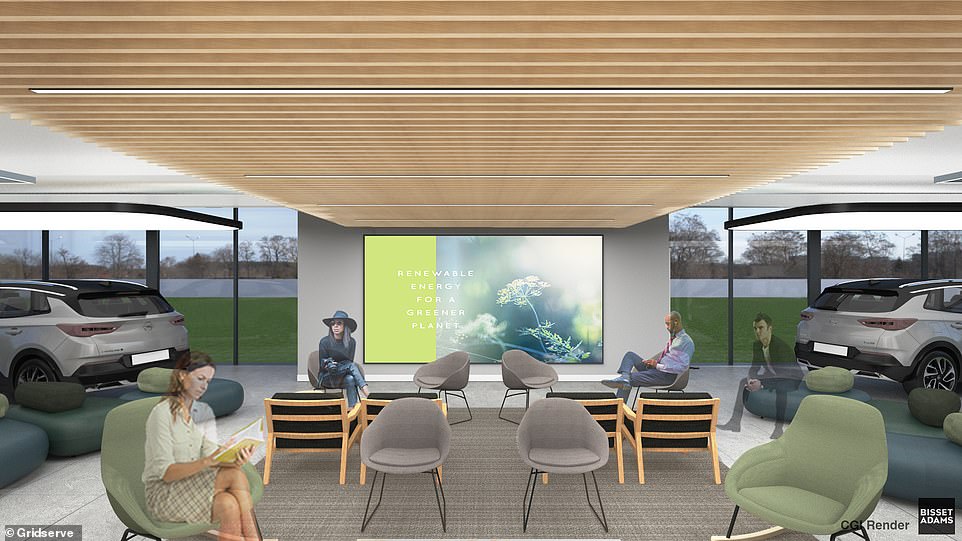 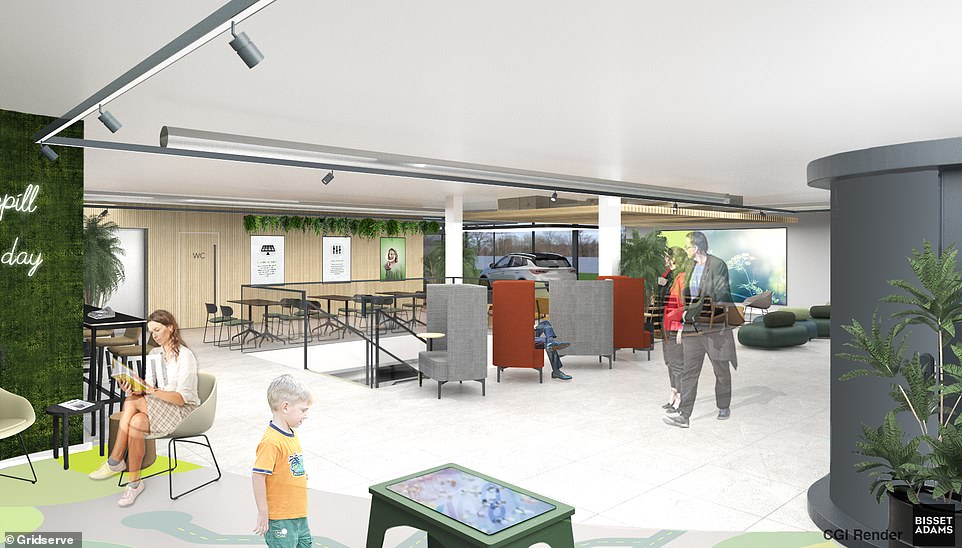 Operators have guaranteed that every forecourt will be powered by ‘zero carbon solar energy and battery storage projects’ to ensure strict carbon emission targets can be met, whilst also keeping prices low

With the sale of new petrol, diesel and hybrid cars due to be banned from 2035 as part of the government’s attempts to hit a carbon-neutral target for 2050, the transition to electric vehicles is very much underway.

There is already the £3,000 Plug-in Car Grant available to buyers of new zero-emissions cars, though more incentives are expected to become available with the arrival of green number plates for electric cars from this autumn – which could give drivers access to bus lanes and free parking in town centres in the future. 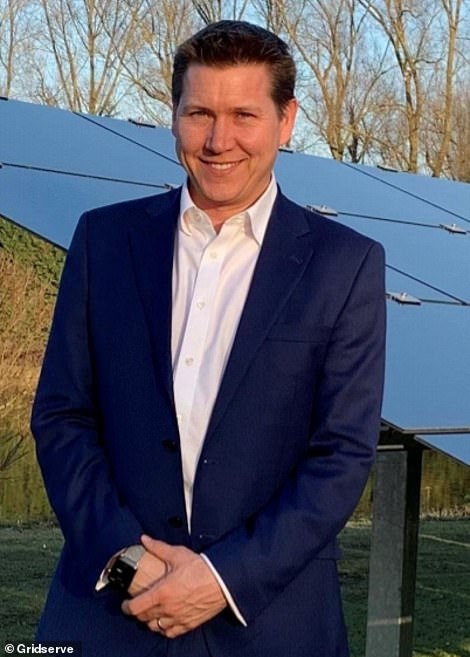 Founder and chief executive of Gridserve, Toddington Harper, who claims to be named after Toddington Services in Bedfordshire

The Department for Transport has also this week published a study looking at ways to accelerate the consumer shift to plug-in vehicles, with one of the proposals being that the government raises the price of new petrol and diesel cars to subsidise the cost of electric models.

On Friday, operators announced a number of retail partners including WH Smith, Costa Coffee, Post Office, Booths, and Gourmade, alongside its charging infrastructure partners ABB and Tesla, There will also be customer support from the AA.

Founder and chief executive of Gridserve, Toddington Harper, who claims to be named after Toddington Services in Bedfordshire, said: ‘Our UK-wide network of over 100 customer-focused Electric Forecourts will eliminate range and charging anxiety by making it easier and cheaper to charge an electric vehicle than to fuel a petrol or diesel alternative.

‘The UK’s first Electric Forecourt, represents so much more than an electric equivalent of a modern petrol station – it will deliver a fully loaded customer experience, offering the Best of British retail and customer service to cater for a full range of consumer and driver needs.’

On the ground floor, a comprehensive retail space, with shops, coffee stalls, a convenience supermarket, and fresh and frozen food.

There will also be an education centre to showcase the latest electric vehicles and benefits of owning one. 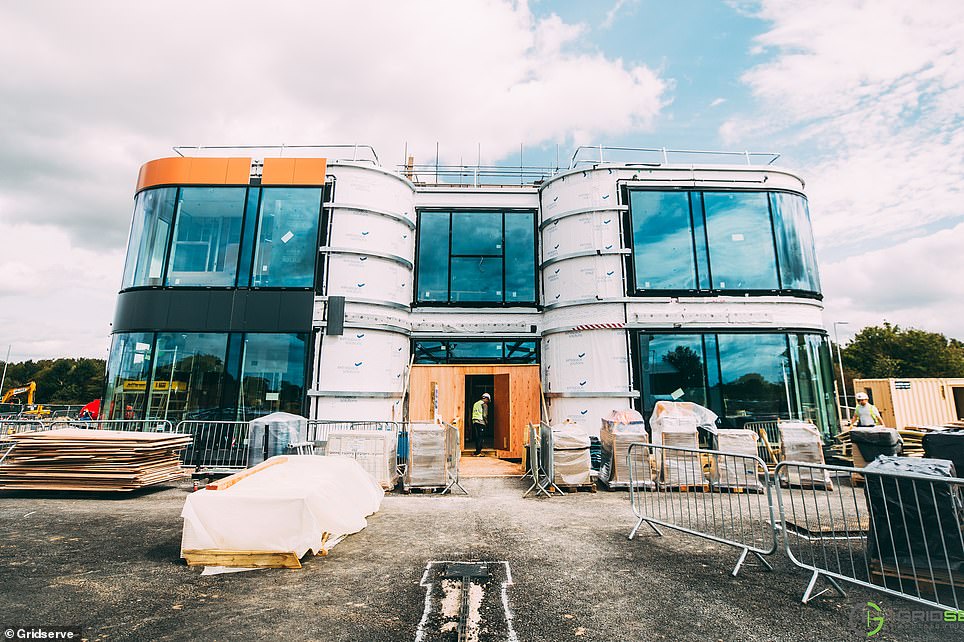 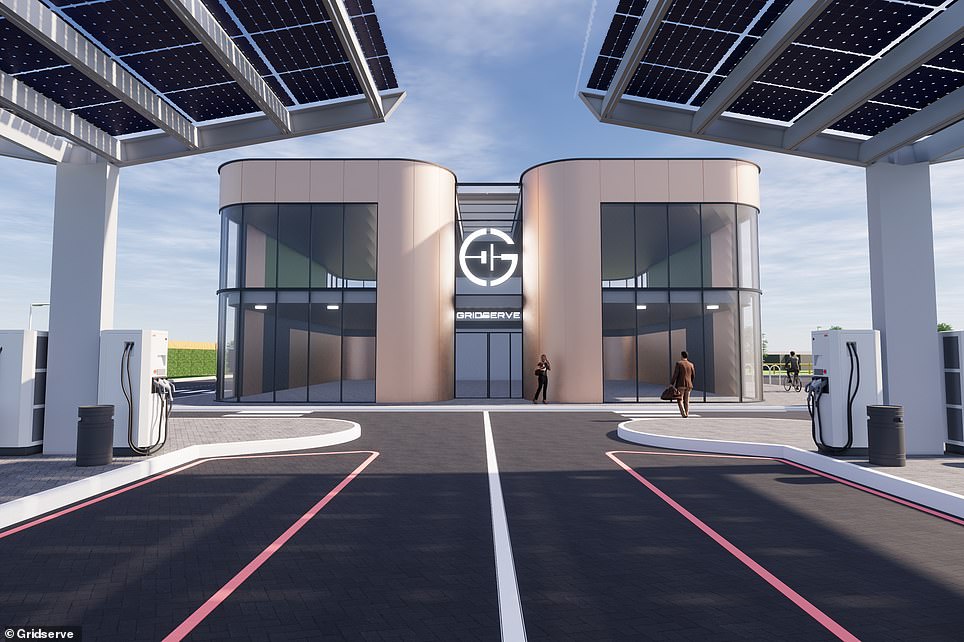 New images released by Gridserve this week show the two-storey building taking shape, with many of the electric-car chargers already installed at the site 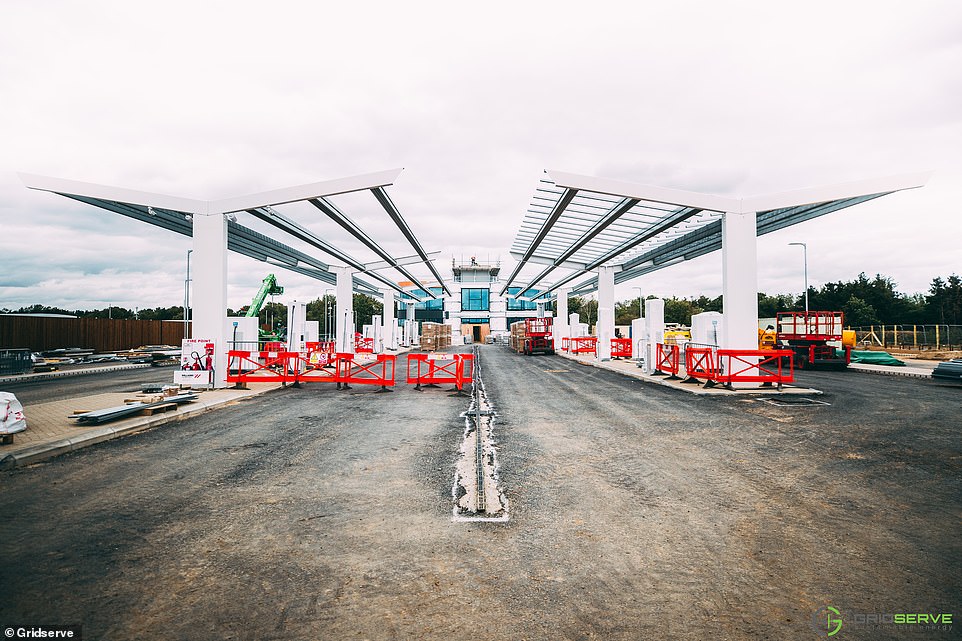 Toby Keir, managing director at WH Smith Travel said: ‘At WH Smith, we have been serving customers on their journeys for over 200 years and we understand how important convenience is to people on the go.

‘We’re therefore delighted to be partnering with Gridserve’s Electric Forecourt to deliver a new first-class retail experience, with fantastic service and a tailored product offer. It’s a great concept and we look forward to playing our part over the next hundred years with the future of electric cars.’

Edwin Booth, executive chairman at quality supermarket chain, Booths, added: ‘As a family-owned retailer with sustainability baked into our core, we couldn’t think of a more fitting opportunity to continue our journey into the South of England.’

Operators have guaranteed that every forecourt will be powered by ‘zero carbon solar energy and battery storage projects’ to ensure strict carbon emission targets can be met, whilst also keeping prices low.

‘To achieve this, Gridserve is developing several large solar farms, supported by grid-scale batteries, as part of its ‘Sun-to-Wheel’ initiative to ensure that 100 per cent of the electricity used at its forecourts is renewable and, from the grid’s perspective, sustainable,’ a statement read. 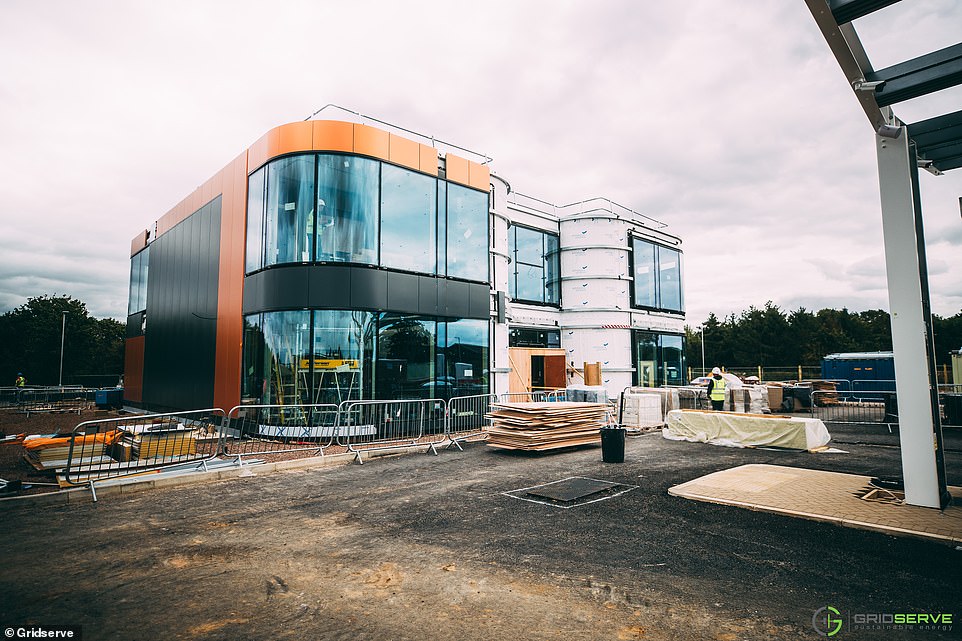 The project has been supported by a £4.86 million grant from Innovate UK, one of the largest awarded by the government agency last year and will also be financed by Hitachi Capital UK 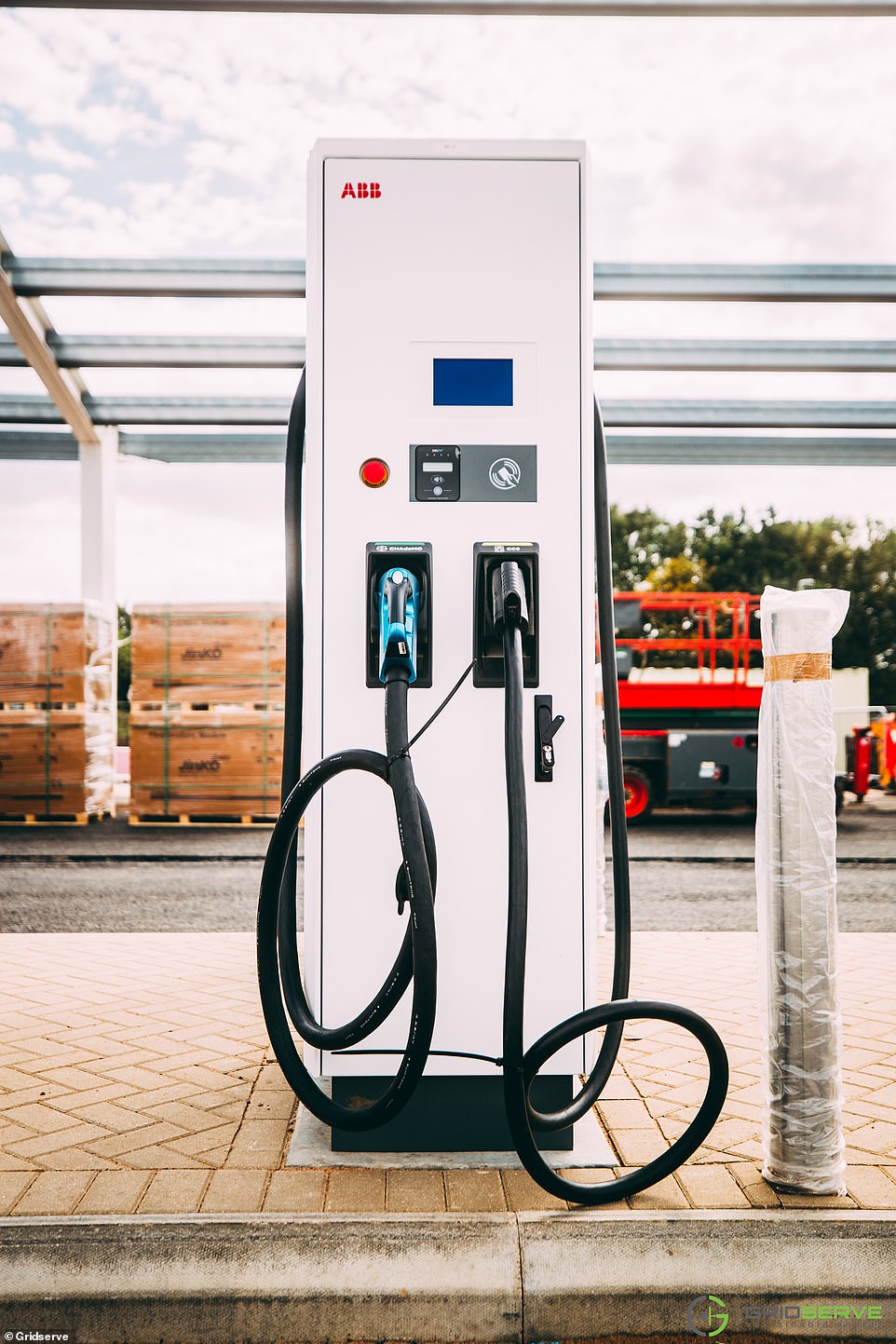 The company has already secured exclusivity at 100 site, and planning applications for two additional forecourts in Uckfield and Norwich East have recently been submitted

The company has recently acquired the UK’s first subsidy-free solar farm – the Clayhill Solar Farm in Bedfordshire – to guarantee that all of the energy used at the Braintree site comes from net zero-carbon solar power.

‘By delivering a series of hybrid solar farms in tandem with our Electric Forecourt rollout, we can ensure that every kWh of energy used to charge EVs is matched from 100 per cent renewable, zero carbon energy sources, enabling us to start delivering net zero carbon transport in 2020, well ahead of the UK’s 2050 net zero target.’

Grideserve has also recently put the finishing touches to an advanced solar farm, a 34.7 Mega Watt peak (MWp) project at York with bifacial panels, single axis sun trackers, and a 30MWh battery, and is completing a 25.7MWp project at Hull using similar technologies.

Shares tank on fears of another lockdown within weeks

What do negative interest rates mean for savers and mortgage holders?

Emergency measures could allow networks to switch off household power