Survivors of the Christchurch massacre raged at terrorist gunman Brenton Tarrant today as they demanded life in prison or even the death penalty for the man who murdered 51 Muslims.

Bereaved relatives and injured victims spoke of their anger at the ‘rat’ and ‘coward’ who faces sentencing this week after he brought terror to two mosques in last year’s gun rampage in New Zealand.

‘You live like a rat and you deserve that… unfortunately he’s not a human, he doesn’t deserve to be judged like a human,’ said Zuhair Darwish whose brother was killed in the attacks.

Darwish said the ‘fair punishment’ for Tarrant would be the death penalty, but New Zealand abolished it in 1961 and the killer is expected to receive life without parole when the judge hands down the sentence on Thursday.

Survivor Mirwais Waziri was applauded by the court after he abandoned his prepared statement to speak to Tarrant directly today, saying the gunman did not have ‘any regrets, any shame in his eyes’.

Another witness urged the judge ‘not to let this man see the sun, never, ever’ and demanded that the Australian white supremacist, 29, ‘has to stay in prison forever’. 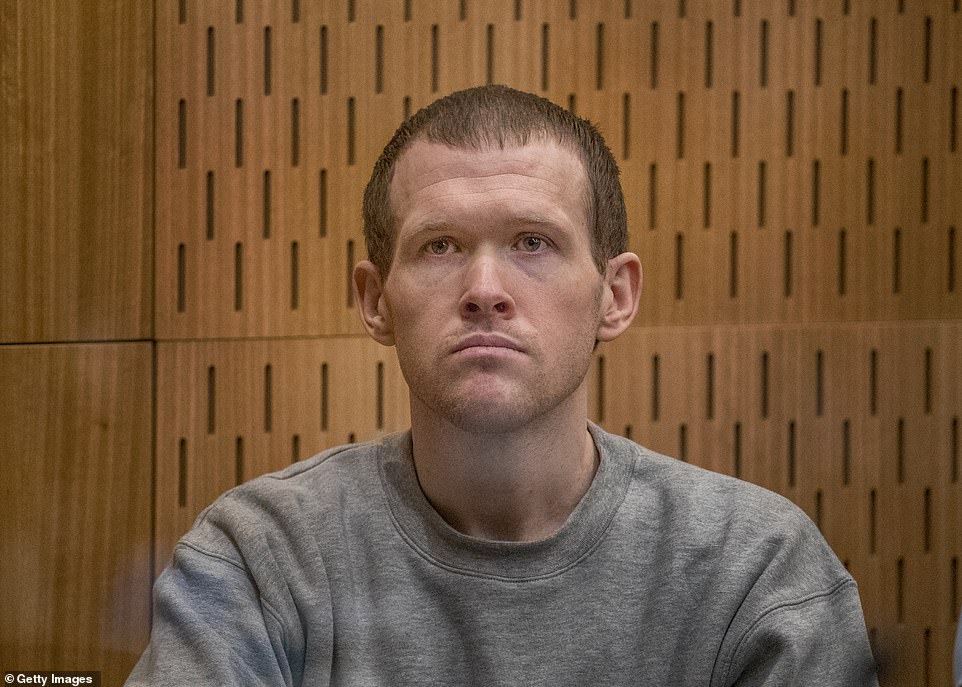 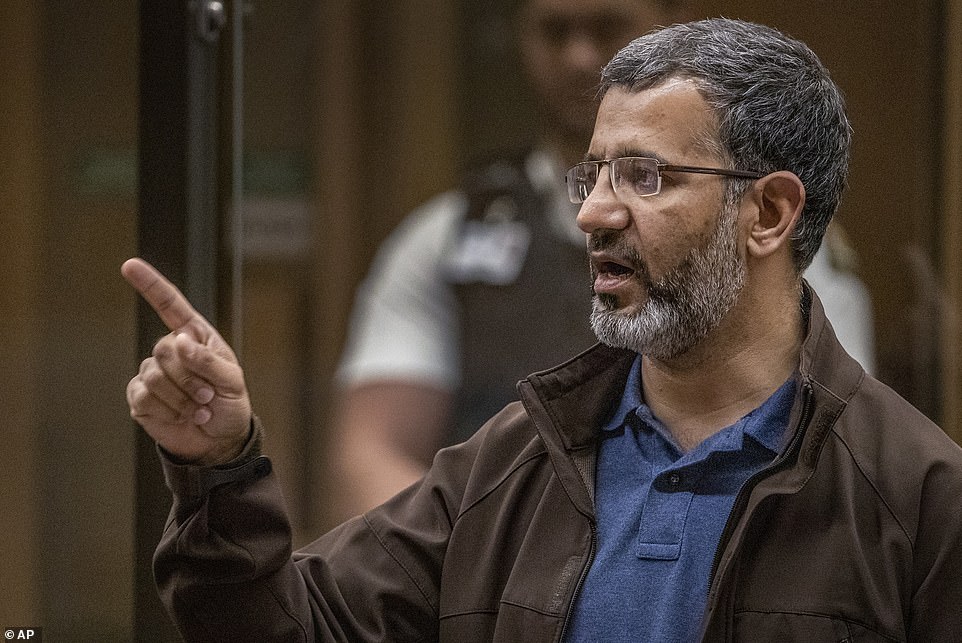 Mirwais Waziri, originally from Afghanistan, said: ‘You are the loser and we are the winners. You proved to the world, you are the terrorist’

A procession of Tarrant’s victims presented heartbreaking testimonies to the High Court today, describing the loss of their loved ones in emotional victim impact statements.

Several victims said they still have trouble getting to sleep, more than a year after the attack.

Many have described ongoing financial difficulties, trouble socialising, and the grief of losing husbands and wives, brothers and sisters, sons and daughters and friends.

Mirwais Waziri, originally from Afghanistan, was sitting in the hallway of Al Noor Mosque as Tarrant terrorised the mosque on March 15 last year. He was struck in the neck by a bullet but survived the attack.

Waziri was due to read a victim impact statement on Tuesday but put it aside to address Tarrant directly, after seeing that he did not have ‘any regrets, any shame in his eyes’.

‘I decided not to read my statement and show him how much I suffer,’ he said.

Tarrant did not flinch as the gallery applauded when Waziri turned to him and said: ‘Today you are a terrorist and us as Muslims are not terrorists.’

‘We as Muslims are not terrorists. Terrorists do not have religion, race or colour. You are the loser and we are the winners. You proved to the world, you are the terrorist,’ he said. 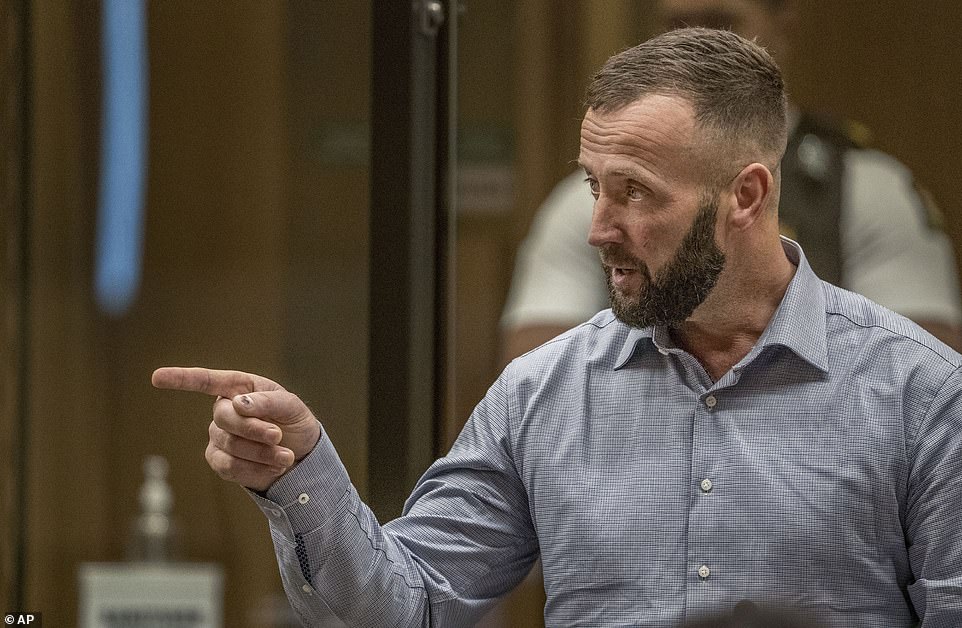 Nathan Smith, originally from Britain and a survivor of the Al Noor mosque shooting, also spoke directly to Tarrant and suggested the gunman should ‘try to read the Quran’ 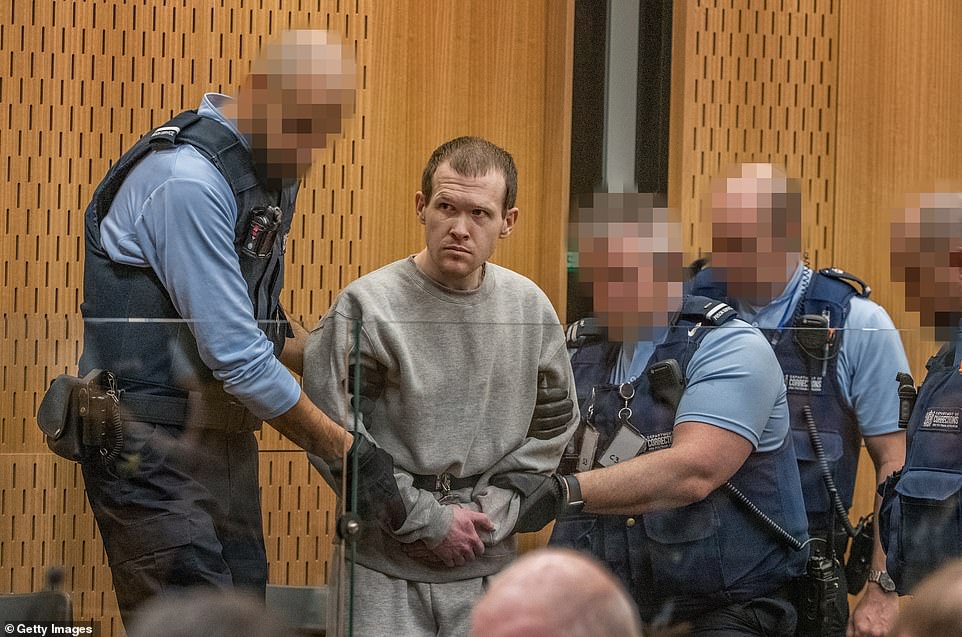 A witness whose name has been suppressed by the court appealed to the judge to give Tarrant ‘the highest punishment that you can. I want you not to let this man see the sun, never, ever.

‘This man has to stay in prison forever. As his mother said, something in his head, he is a sick man, he is not a human being.’

Tarrant occasionally stroked his chin as speakers referred to him as ‘a devil’ and a ‘hateful lowlife’ who had destroyed lives but made the New Zealand Muslim community stronger.

Kyron Gosse, the nephew of 65-year-old victim Linda Armstrong, said Tarrant had come to New Zealand as a guest but used that privilege to destroy a family who had lived there for seven generations.

‘Filled with his own racist agenda this coward hid behind his big powerful guns and shot little old Linda from afar,’ he said, adding that the gunman ‘stole our nation’s innocence’.

The nation of five million people had been relatively free from major gun violence until the country’s worst mass shooting last year.

‘I want you to understand my utter rage when I learnt this man was a guest to New Zealand. This man is not one of us, but that didn’t stop him from slaughtering us,’ Gosse said.

‘He entered into our home with ill intentions and hate in his heart, only to repay our hospitality by murdering our family and our guests, people who we welcome into this country with the promise of a better life.’

Nathan Smith, originally from Britain and a survivor of the Al Noor mosque shooting, also spoke directly to Tarrant who sat in grey prison clothes cornered by guards.

‘When you get a free minute, which you will have plenty of. Funny, eh? Very funny. Maybe you should try to read the Koran. It’s beautiful,’ he said, reacting to Tarrant’s apparent smirk. 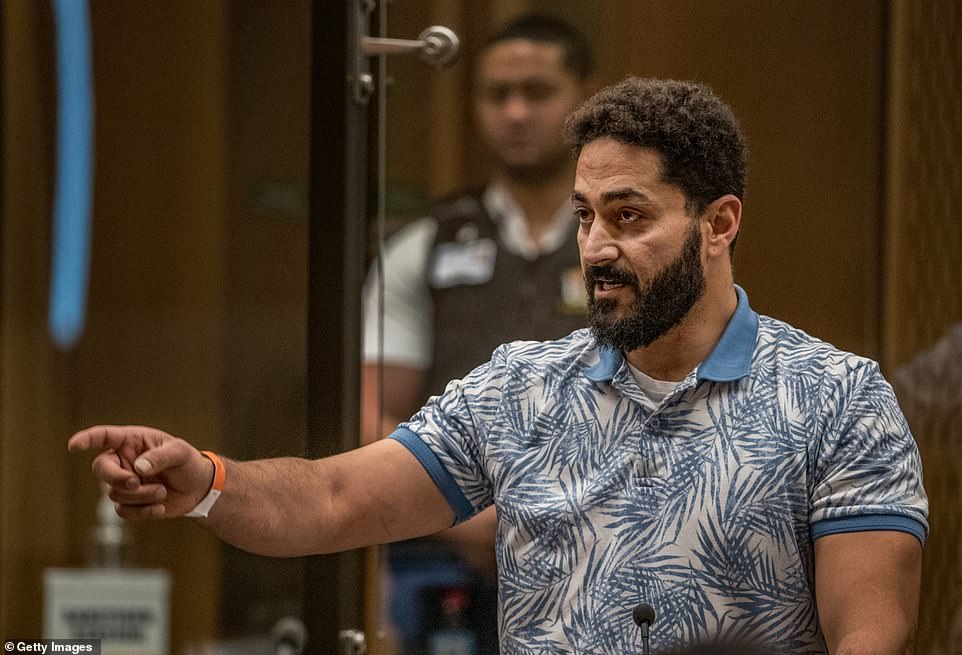 Wasseim Daragmih gestures during the sentencing hearing, which is expected to end on Thursday with Tarrant receiving a life sentence without parole 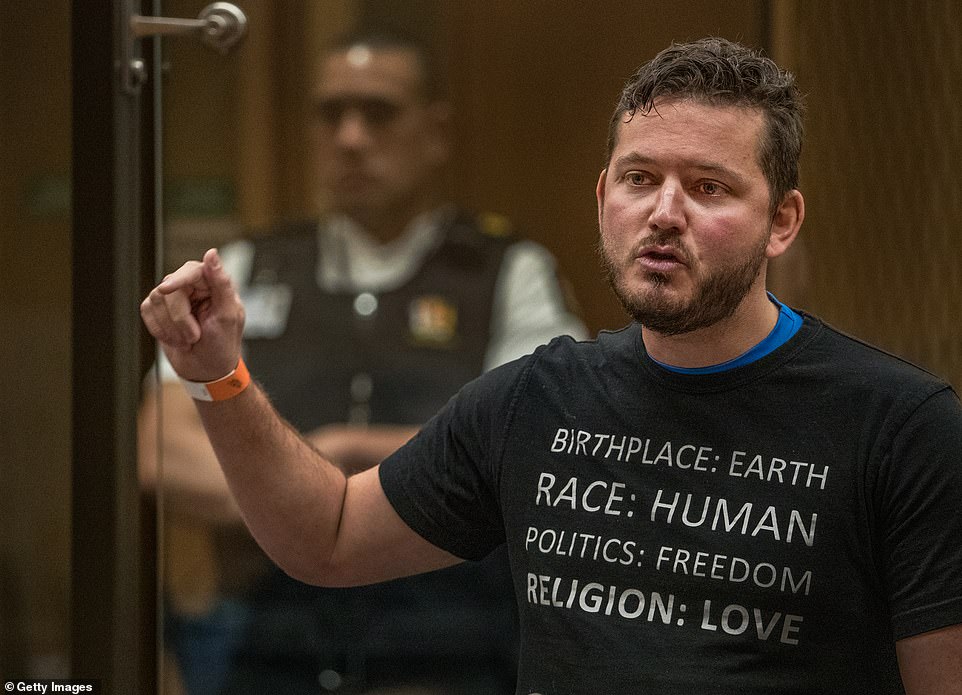 Kyron Gosse, the nephew of victim Linda Armstrong, is seen during the sentencing hearing for Tarrant on Tuesday

The court heard on Monday how one brave worshipper, Naeem Rashid, charged at Brenton Tarrant during the terror attack before Tarrant swung round his AR-15 and fired four shots at point-blank range.

Today Rashid’s wife told the court: ‘Naeem died trying to save others and his act of bravery is something his sons will always feel proud for. His death was a reflection of his life.’

She added: ‘Since my husband and son passed away I have never had a proper normal sleep. I don’t think I ever will.

‘That is why his punishment should continue forever. No one ever stopped him from going to the mosque. He was greeted with hello brother when he entered the mosque.’

Sanjeda Neha’s husband Mohammad Omar Faruk, 36, was shot in the back and killed as he prayed at Al Noor Mosque last year.

The couple’s daughter Noor Omar will turn one on Friday but she never got the chance to meet her father.

In a victim impact statement, the court was told Neha cries when she thinks about the loss of her husband, NZ Herald reported.

‘There are two things I am feeling when I look at our baby emotionally I feel like crying I ask why has Allah taken him away what sin have I committed that we have been punished for,’ she said. ‘Sometimes I would rather di’

Neha’s daughter gets her name from her late father and the mosque he was praying at in his final moments.‘When I am alone I sometimes thing about Faruk… I cry when I am alone… but I have to be strong for my daughter,’ Neha said.

Neha, who married Faruk in Bangladesh in 2017 told the court her daughter reminds her of her husband when she breathes and cries, adding that she wonders how she will ever tell her daughter about her father’s death. 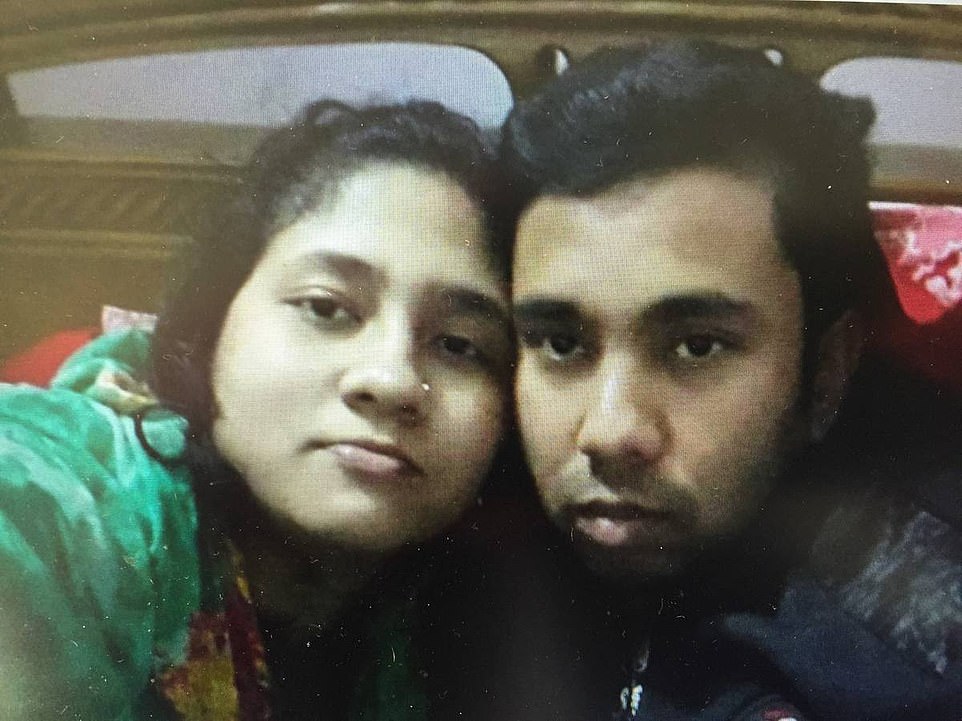 Sanjeda Neha’s husband Mohammad Omar Faruk, 36, was shot in the back and killed as he prayed at Al Noor Mosque on March 15 last year 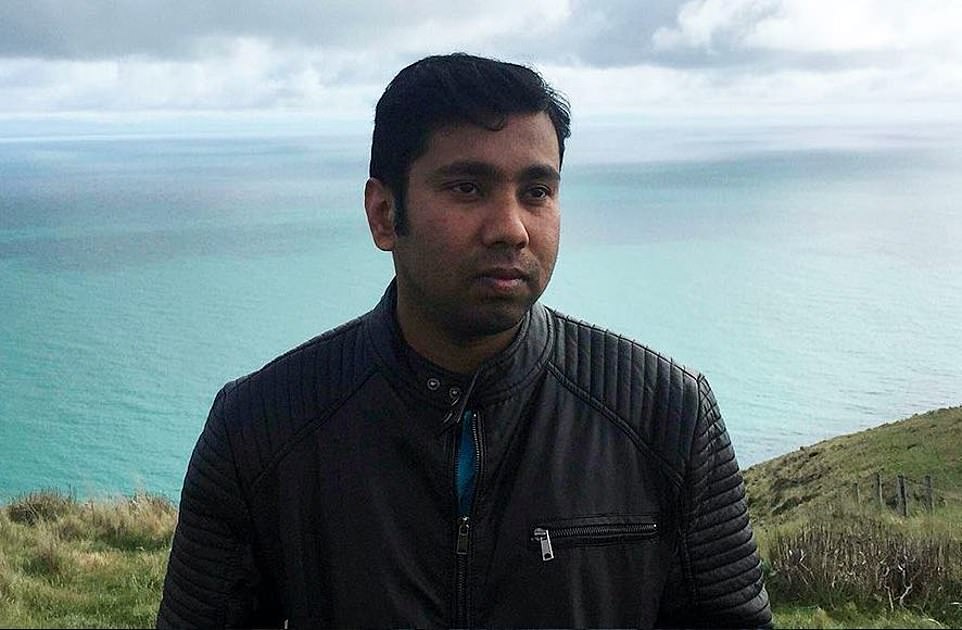 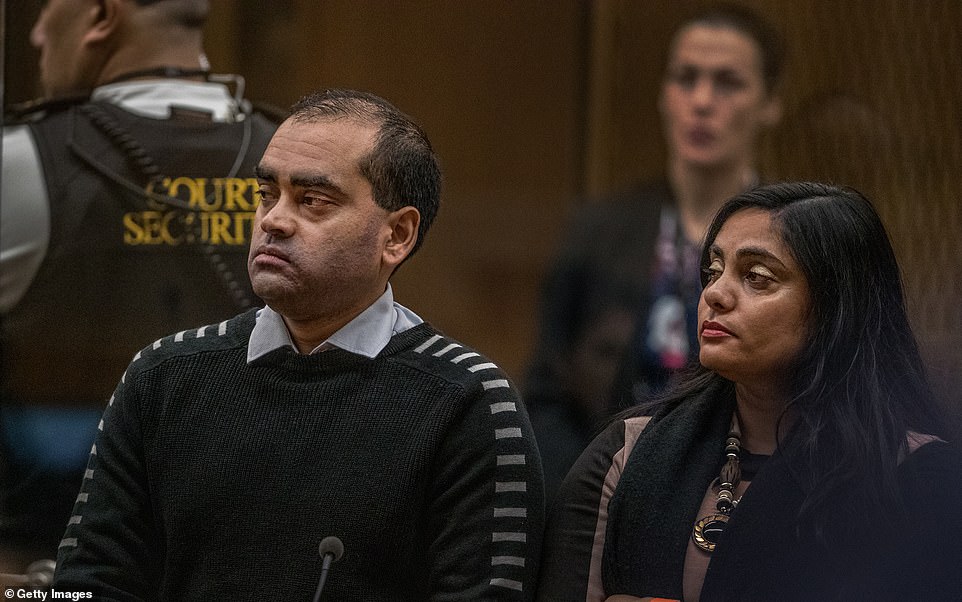 Zahid Ismail lost his twin brother in the attack last year. Pictured: Zahid Ismail and Raesha Ismail are seen in court on Tuesday

Very few victims have elicited emotion from Tarrant, sitting roughly five metres away in the dock and listening to the victim impact statements.

However, Tarrant appeared to chuckle as Zahid Ismail spoke about his twin brother Junaid, his passion for cricket and his ‘pride in his long beard’.

Ismail stared at Tarrant after the terrorist appeared to react, saying outside court afterwards: ‘I wanted to see if there was any empathy. There is definitely a human being in there.’

‘My brother is now not able to see his children grow and see their development into adulthood. But they will become confident proud Kiwis that live in the same place as their Daddy lived,’ he said.

‘My family and I have always been strong individuals. I continue to attend (Al Noor mosque) and pray with passion and strength.’

Ismail was followed by his sister, Raesha Ismail, who described her non-Muslim community’s embrace of her Islamic faith in the wake of the attack.

‘After the events of March 15 I don’t think I have to hide my faith in the workplace. This has been positive,’ she said. ‘I’ve put up a Muslim calendar at work … I was asked to host an Eid party which was well attended.

‘I have strengthened my voice to be able to speak up for when it matters.”Since the passing of my brother … I’ve had visions of what his future would have been like, with his wife and children,’ Ms Ismail said. 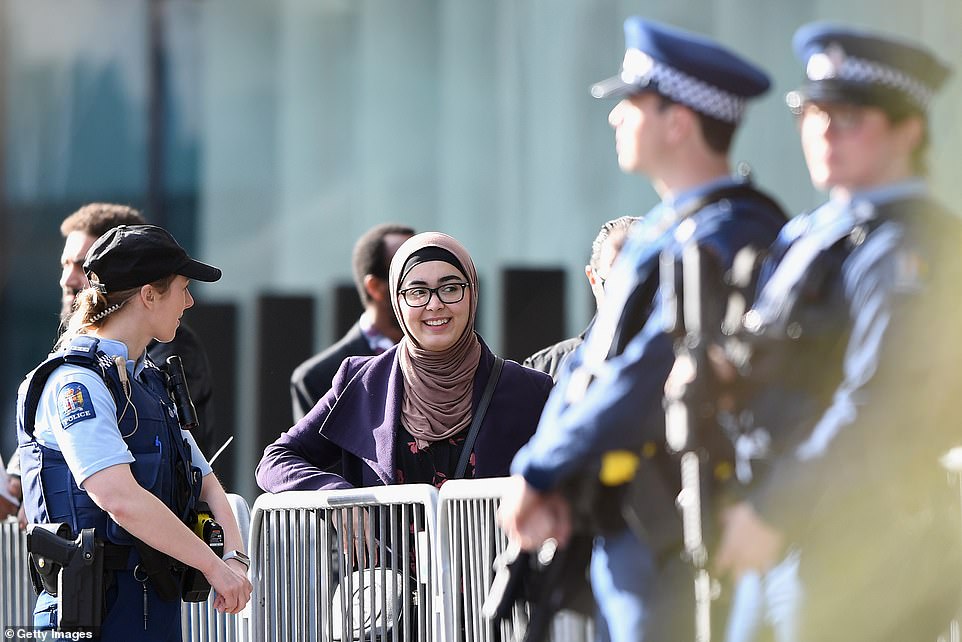 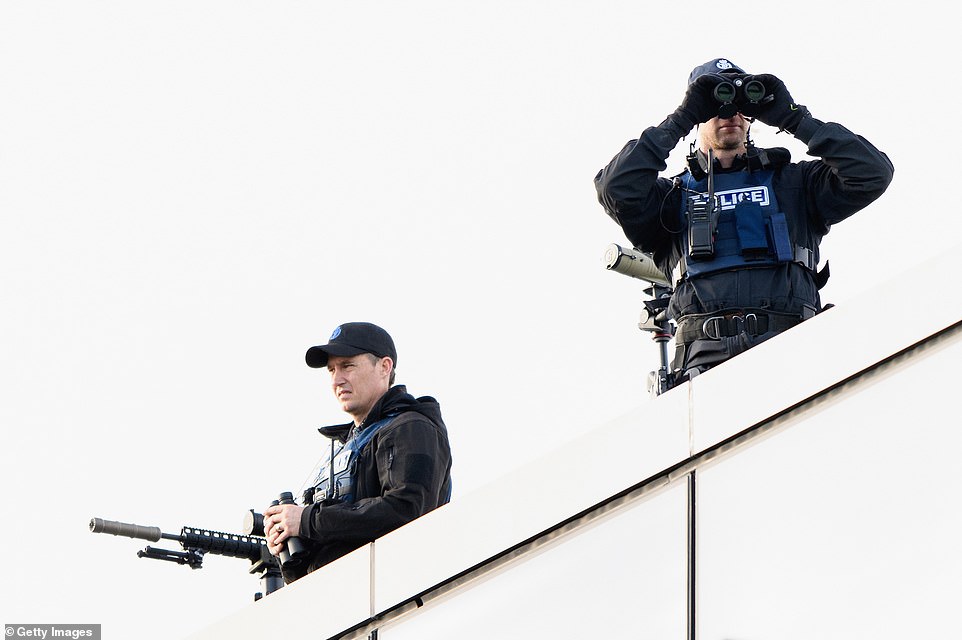 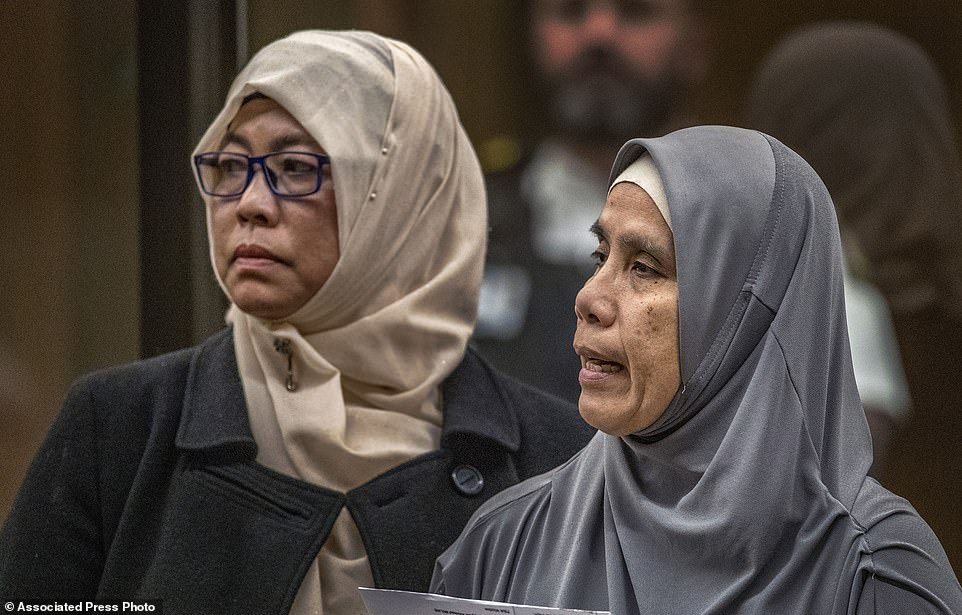 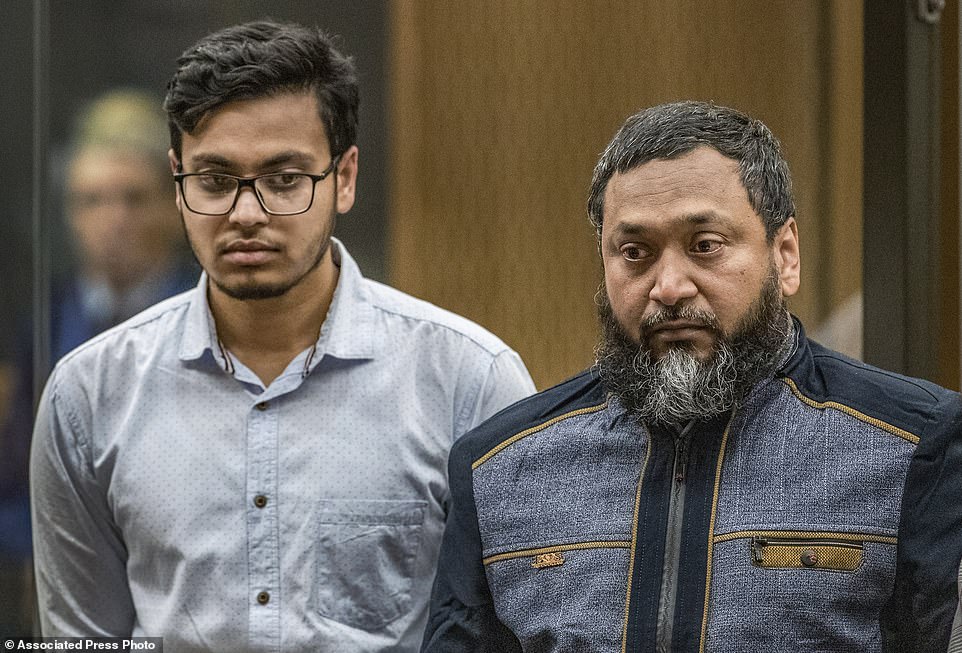 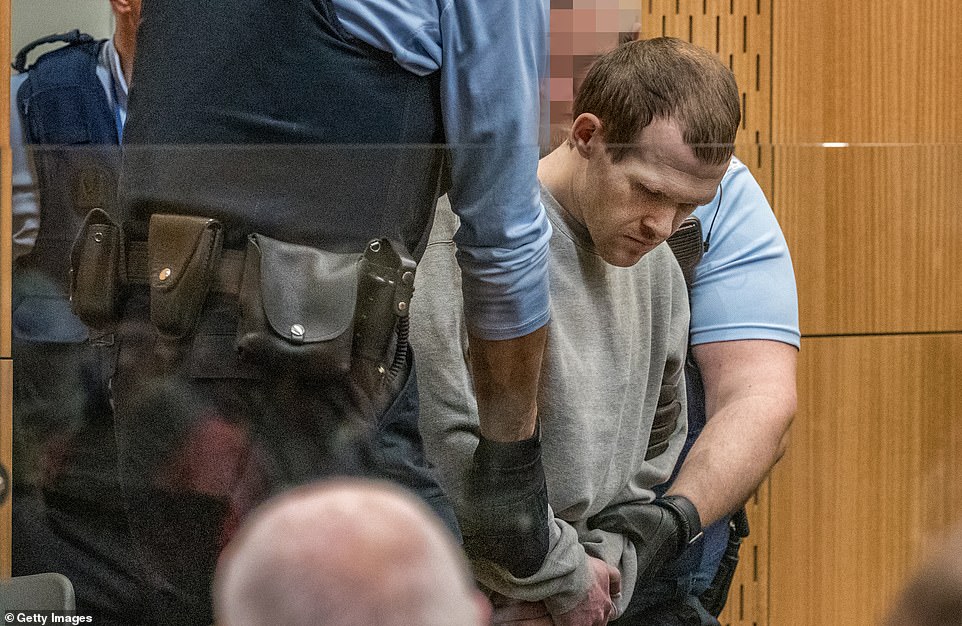 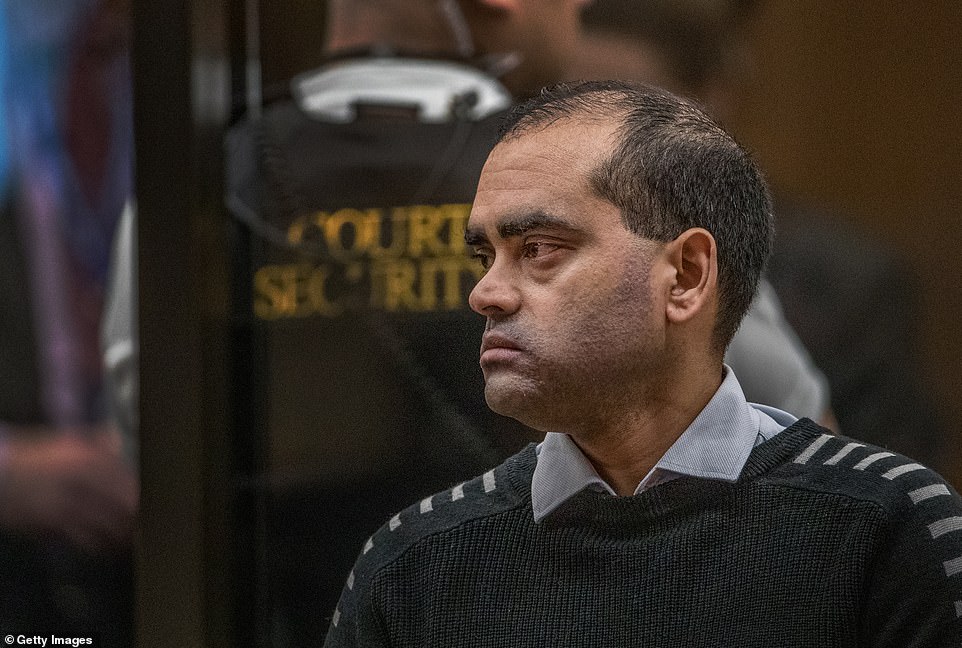 Motasim Uddin, who was shot in the leg and spent more than three months hospitalised, said he hadn’t been able to return to his job as a welder and was worried about his future, especially as he was trying to support his parents in Bangladesh.

‘I cannot forget what happened, what I saw,’ Uddin said. ‘I try to forget, but I wake up thinking about it.’

Noraini Milne, whose 14-year-old son Sayyad was killed, said her own survival came as a blessing as she planned to spend her life helping others.

‘You chose to perform a despicable and cowardly act,’ she said to Tarrant.

Tarrant has pleaded guilty to 51 charges of murder, 40 of attempted murder and one of terrorism after storming into two mosques in Christchurch, with the rampage ending when police stopped him as he travelled to a third.

Lawyers expect the 29-year-old Australian to be the first person jailed for life without parole in New Zealand.

Tarrant is representing himself at the hearing, but judge Cameron Mander has imposed reporting restrictions to prevent him using the court as a platform for extremist views. 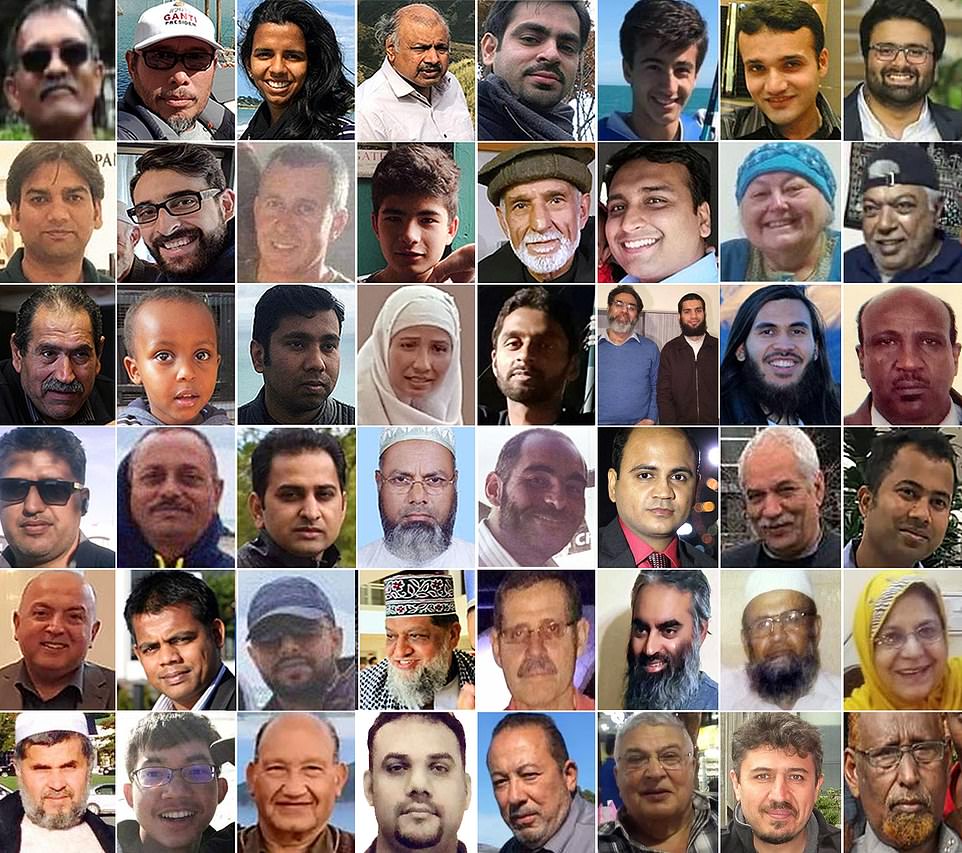 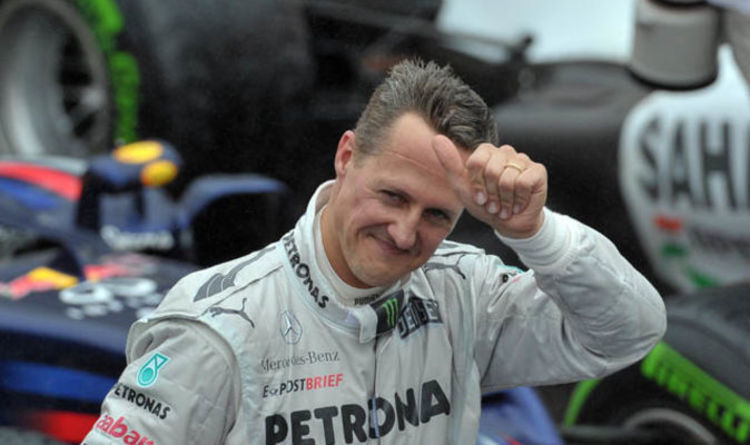 Luca Cordero di Montezemolo revealed details of another health scare which came before his horror skiing accident in 2013. During the opening […] 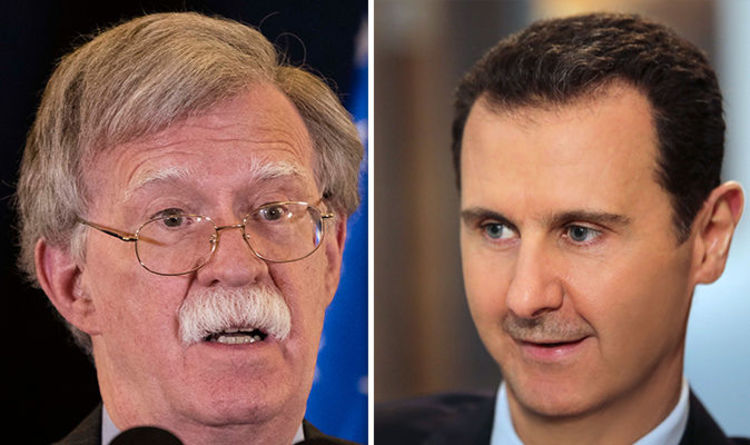 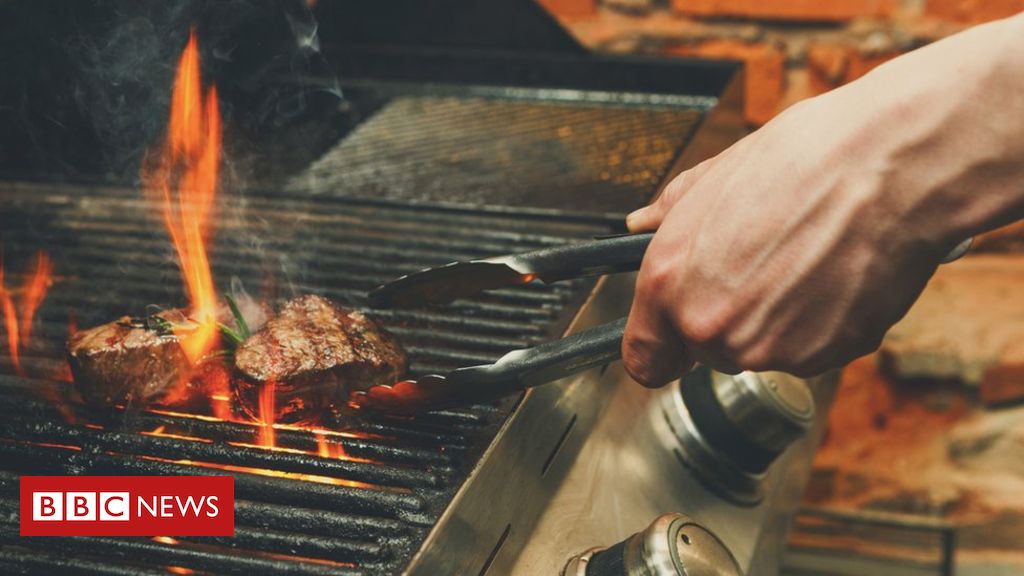