Falwell’s departure from the university comes just two days after he apologized on Wednesday for posting a picture online which showed him with his pants unzipped and his arm around a woman.

The picture, posted and deleted from Instagram Tuesday, sparked controversy because of the strict code of conduct for Liberty University students which requires them to dress with ‘appropriateness’ and ‘modesty’. 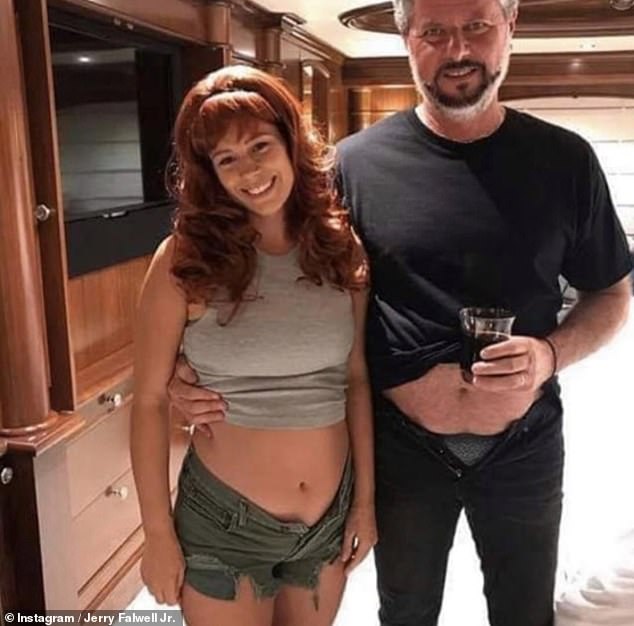 Liberty University President Jerry Falwell Jr. has claimed in an interview that the controversial Instagram picture was ‘just in good fun’ after backlash from both conservatives and liberals 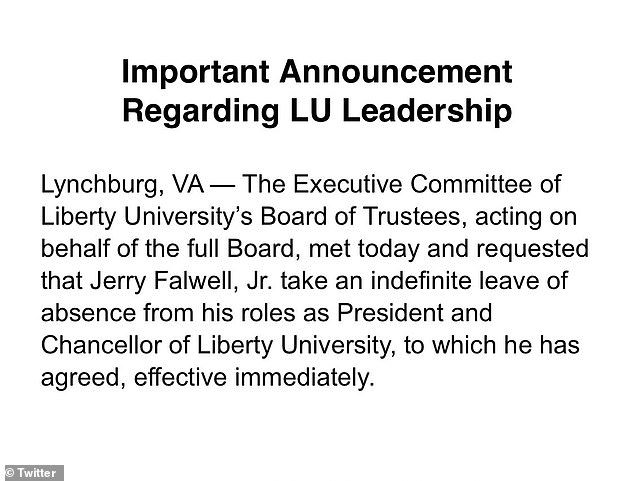 The Liberty University board of trustees met Friday and asked that Falwell take an indefinitely leave of absence from his position. His leave is effective immediately

Falwell tried to explain his Instagram post in an unusual interview with Morninline on WLNI 1059, in Lynchburg, Virginia, on Wednesday morning, claiming the woman was his wife’s assistant and that he’s ‘gonna try to be a good boy from here on out’.

‘You know it was weird, because she was, she’s pregnant, she couldn’t get her pants up, and I was, trying to like — my, I had on a pair of jeans I haven’t worn in a long time so I couldn’t get mine zipped either,’ the influential evangelical leader said.

According to Politico, the woman tagged in the original post was Kathleen Stone whose Facebook page lists Liberty University as her place of work. 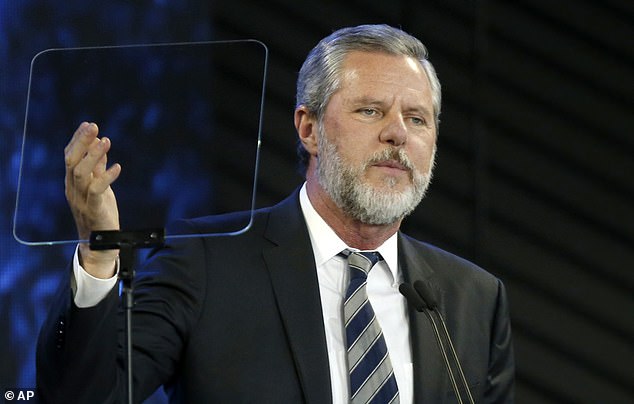 ‘I should never have put it up and embarrassed her because, um, anyway, I’ve apologized to everybody and I promised my kids, I’m gonna try to be a good boy from here on out,’ Falwell added.

He was also asked about whether the picture was supposed to be a parody of the comedy TV show ‘Trailer Park Boys’.

‘Whatever,’ he answered. ‘It was a costume party on a — we were on vacation. And, anyway, long story short it was just in good fun. That’s it.’

Falwell quickly deleted the original picture on Tuesday which was posted alongside several other vacation snaps that appeared to be taken on a yacht. 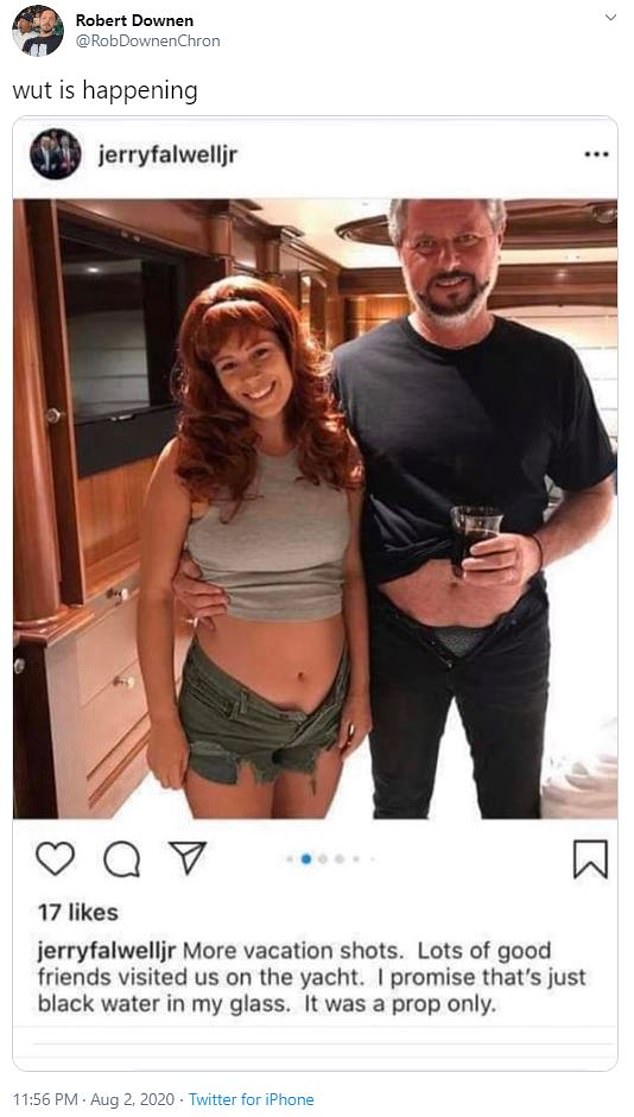 The post was saved and shared Robert Downen, a religion correspondent with The Houston Chronicle. Falwell says the woman pictured is his wife’s assistant 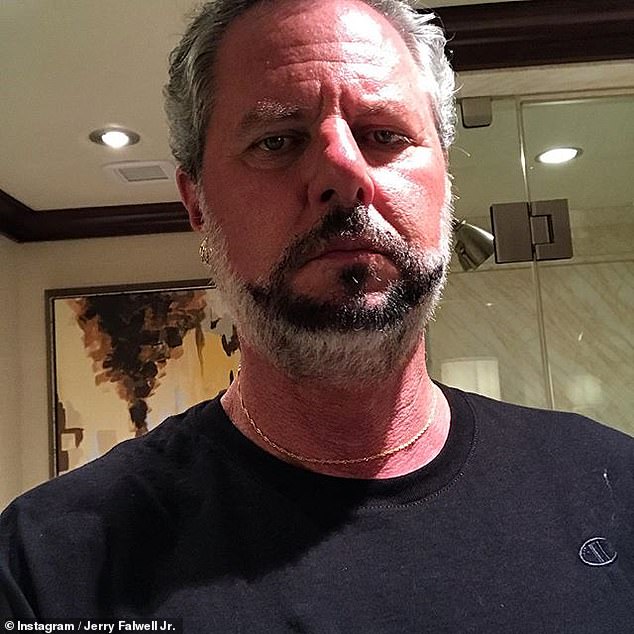 The picture appeared alongside other pictures from Falwell’s family vacation 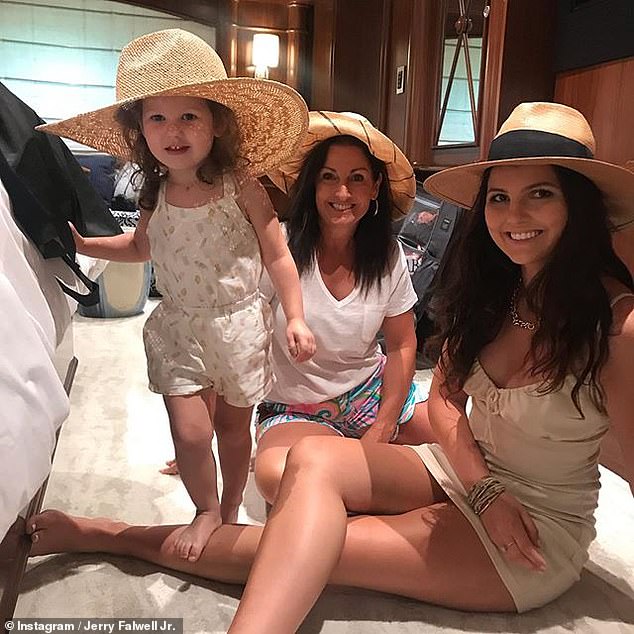 The picture was saved and shared online, however, by Robert Downen, a religion correspondent with The Houston Chronicle.

In the post, Falwell is seen with one arm around a woman whose shorts appear unbuttoned while he is wearing unzipped pants with his underwear showing underneath.

The university president is also holding a glass containing a dark-colored liquid while the caption read: ‘More vacation shots. Lots of good friends visited us on the yacht.

‘I promise that’s just black water in my glass. It was a prop only,’ the caption added.

The picture was condemned by liberals and conservatives alike, as the evangelical university that Falwell leads enforces a strict code of conduct for its students.

Students from Liberty University, which was founded by Falwell’s father, are prohibited from having sexual relations outside of ‘biblically-ordained’ marriage and are also banned from engaging with media that contains lewd lyrics, sexual content and nudity. 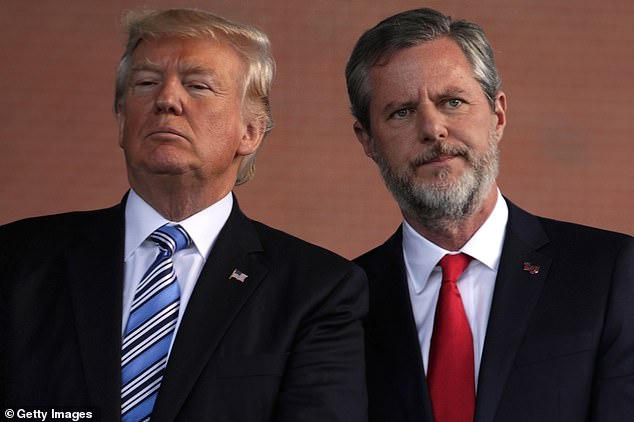 Falwell, pictured right with President Trump, said he had apologized to everyone for the pictures and had promised his kids that he’s ‘gonna try to be a good boy from here on out’ 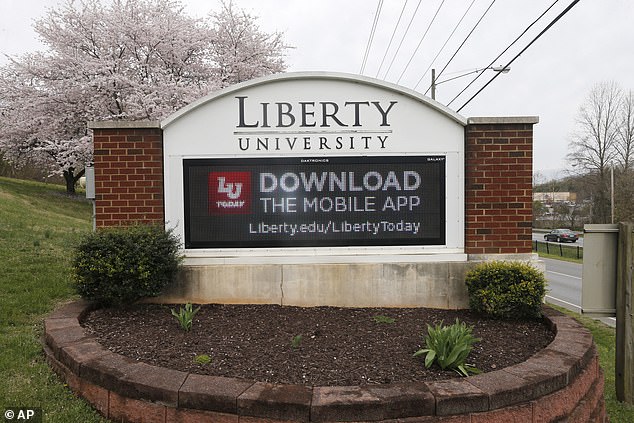 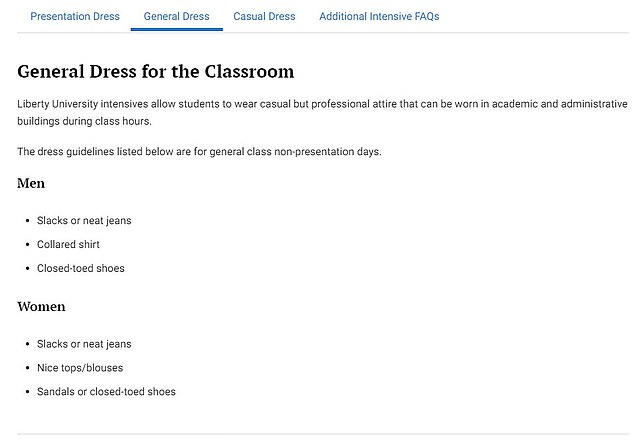 Liberty University expects its students to dress in a certain manner

They are expected to adhere to a dress code that states: ‘Cleanliness, neatness, appropriateness, and modesty are the general guiding factors with regard to dress.’

Falwell was blasted as a hypocrite for posting something with his midriff exposed, given his school’s strict policies.

‘How is this Jerry Falwell Jr. photo even real?’ tweeted Meghan McCain.

‘Also if you’re running the largest Christian university in America maybe don’t put photos of yourself on social media with your pants undone on a yacht – with random women in bad wigs. So gross, so hypocritical.’

‘Help! I tried to look anywhere not-alarming in this Jerry Falwell Jr. photo and I sprained my eyeballs!’ wrote Bette Midler.

‘People are coming up with all kinds of kooky theories about this pic, but I’ll just go ahead & say it. That is the best Peg Bundy impersonator I’ve ever seen!’

Conservative CNN host S.E. Cupp also wrote: ‘There were already so many good reasons not to entrust your kids to Jerry Falwell Jr’s learning institution. The unzipped pants yacht photo – of the school’s PRESIDENT – is sadly the least of them.’

‘Jerry Falwell Jr is a disgrace to his father. And his father was a segregationist who built whites-only schools & defended apartheid,’ added broadcaster John Fugelsang.

Meghan McCain blasted Falwell as ‘hypocritical’ for the Instagram picture 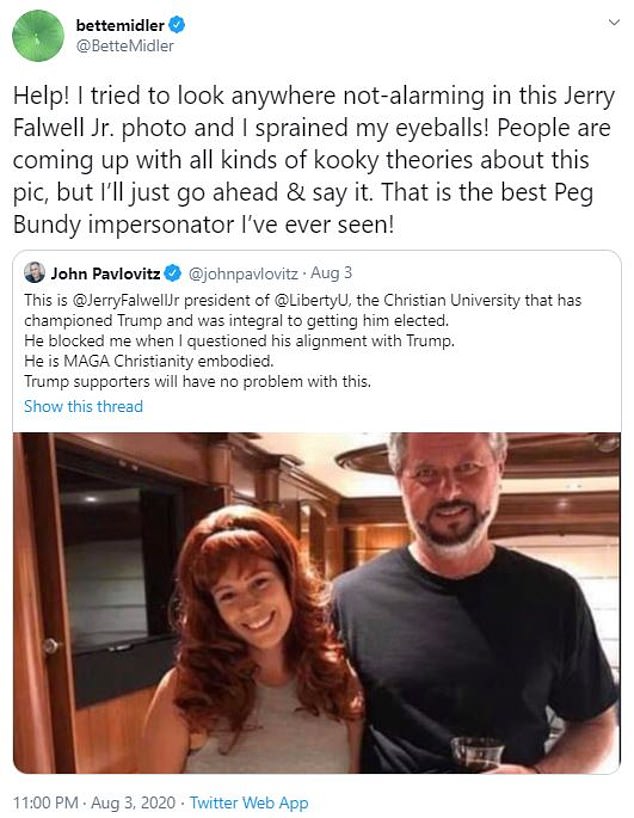 Broadcaster John Fugelsang branded Falwell as ‘disgrace to his father’

The post also drew criticism from an account allegedly run by a Liberty university alumni, who described themselves as ‘tired of the religious hypocrisy’.

‘Imagine posting this while living on the dorms,’ it said of the picture.

‘This would have been at least one required meeting with the office of student leadership or Resident Director I’m not for legalism, but I do think we should keep figureheads accountable for how they represent their community.’

‘I’m so done with this man child,’ they added.

Others rushed to Falwell’s defense and claimed that the picture had been taken out of context.

After initially claiming the picture was not Falwell, Malachi O’Brien, a fellow at the Falkirk Center at Liberty University, accused people of posting the picture to make it appear that Falwell was acting ‘ungodly’.

‘I deleted after I got more context on the photo. It was Jerry, so I was wrong,’ he said, after deleting his first tweet incorrectly stating it wasn’t him.

‘It was a photo taken out of context of the other photos w/ it. Did you know that? What it was was being used to imply is ungodly & seems to have been posted out of context for that reason.’

Liberty University has not commented on Falwell’s picture or the following controversy. 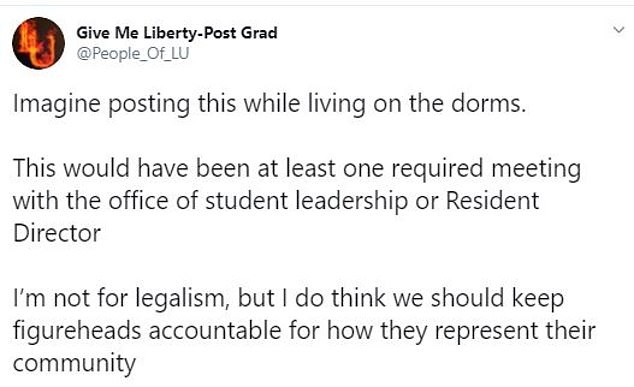 The added that they were ‘so done with this man child’ 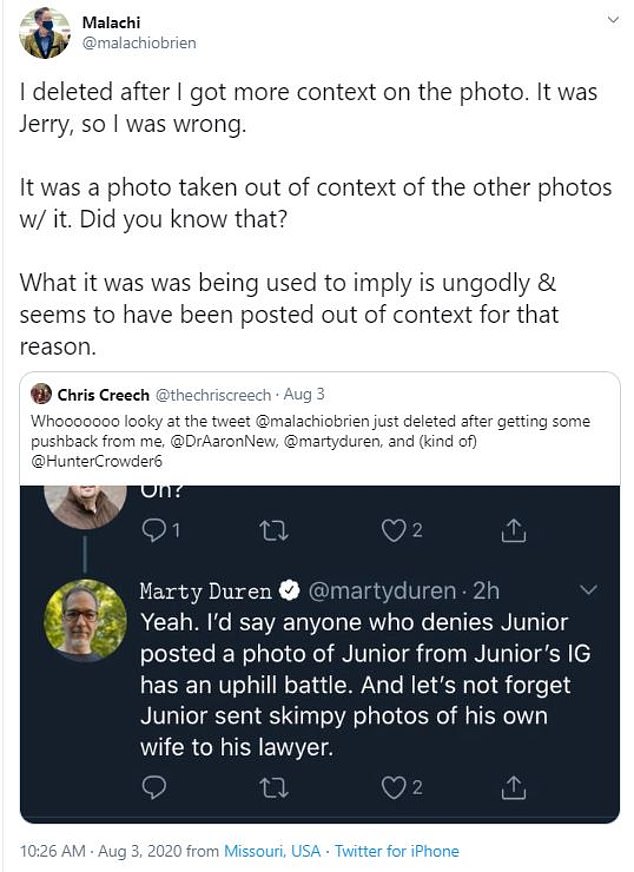 Malachi O’Brien, a fellow at the Falkirk Center at Liberty University, rushed to Falwell’s defense

This is not the first time that it’s president has been caught up with controversy over allegedly inappropriate pictures.

Politico reported in 2019 that they had found pictures of the Christian leader visiting a nightclub in Miami in 2014.

Falwell claimed the images were photo-shopped but the publication doubled down on their claim, providing additional images allegedly of him from a Miami nightlife site in response.

Liberty University was in June accused of ‘racial insensitivity displayed by leadership’ by several students athletes who decided to transfer from the school, according to Relevant.

It came after Falwell apologized over a tweet that used blackface and KKK imagery to make fun of Virginia’s Democratic governor, Ralph Northam.

His tweet led to increasing levels of push back from faculty, students, Christian leaders and notable alumni over his social media presence.

‘After listening to African American LU leaders and alumni over the past week and hearing their concerns, I understand that by tweeting an image to remind all of the governor’s racist past I actually refreshed the trauma that image had caused and offended some by using the image to make a political point,’ Falwell said.

‘Based on our long relationships, they uniformly understood this was not my intent, but because it was the result I have deleted the tweet and apologize for any hurt my effort caused, especially within the African American community.’

Slate reported, however, that it is still leading to the university losing new recruits. The community-wide free testing effort in Bolinas, California, is voluntary. The town is one of two communities taking part in the new […] 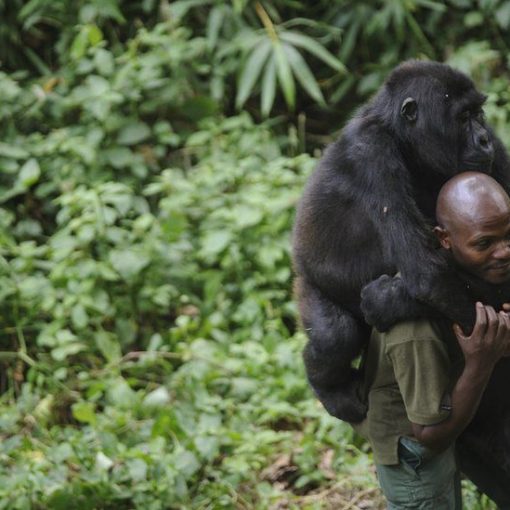 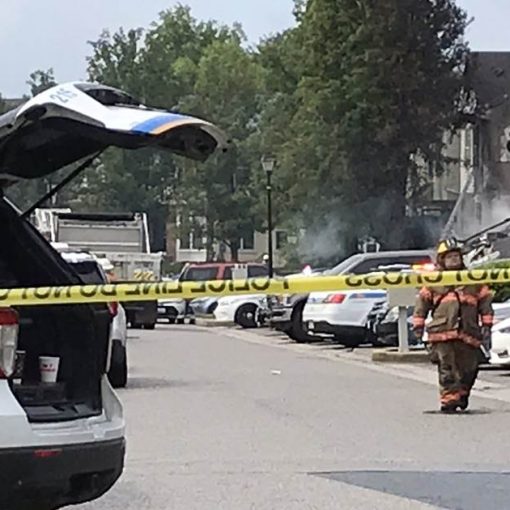 Three people were killed and two people were injured Saturday morning after a large fire and a police shooting in Baltimore County, […]