Friendships in Hollywood are difficult to forge as there is so much competition for roles and actresses travel so often for film-making.

But a celebrity clique of high wattage has formed over the years and they showed their power this weekend.

Jennifer Aniston, Lisa Kudrow Courteney Cox, Sarah Paulson and Holland Taylor all gathered for Sandra Bullocks’s 56th birthday on Sunday in Los Angeles. Between them, they have made 200 movies and earned about $1B. 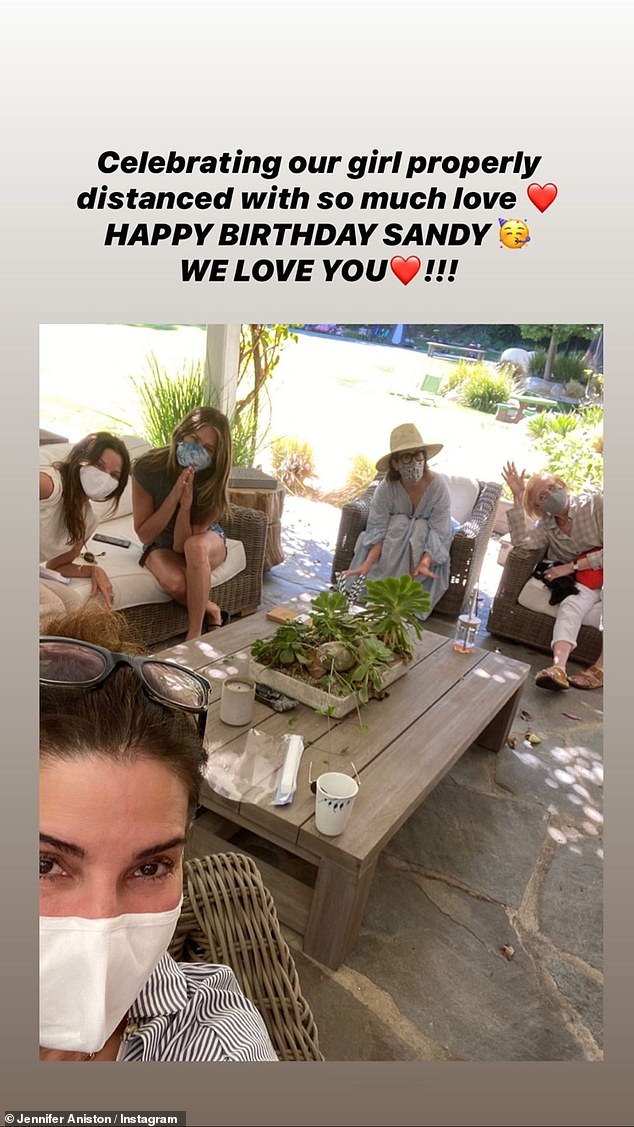 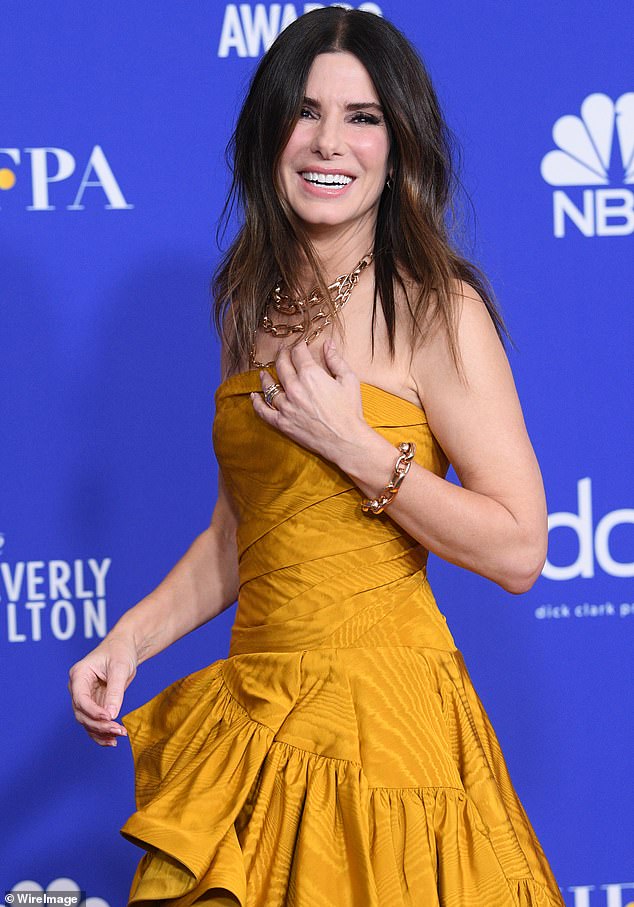 The queen of the box office: Bullock has starred in several hits including Miss Congeniality and The Heat. Seen in January

They were all reclined in an outdoor setting while in their comfie quarantine clothes.

‘Celebrating our girl properly distanced with so much love. HAPPY BIRTHDAY SANDY WE LOVE YOU!!!’ the Friends vet said in her caption. 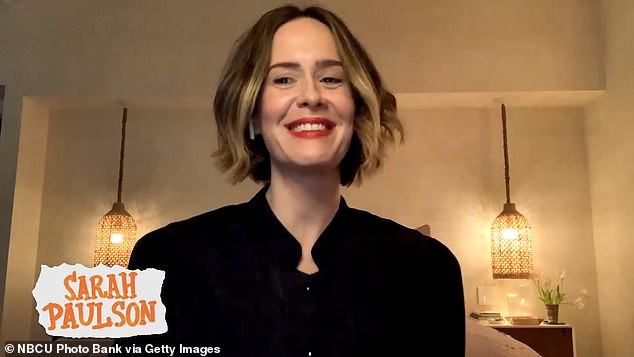 Jennifer and Sandra have been friends for almost a decade after being introduced by mututal pals. Bullock was even in attendance when the Morning Show vet wed Justin Theroux in 2015 (they divorced two years later).

Sandra is close to Sarah because they made the Netflix hit Bird Box together.

The Friends actresses took the opportunity to share a note about voting. 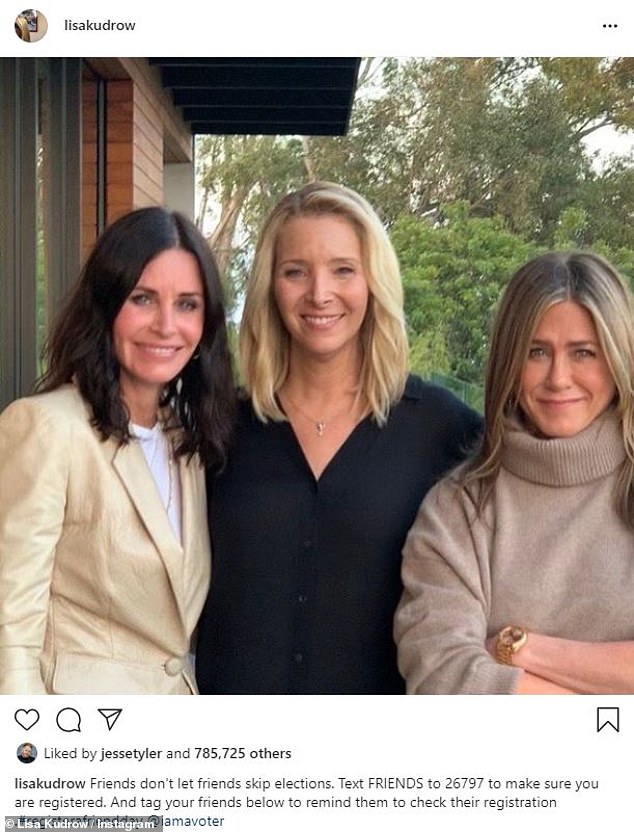 United Aniston, 51, Kudrow, 56, and Cox, 56, appeared collectively on Instagram Sunday encouraging their fans to cast their votes in the election this fall

Kudrow, who played Phoebe Buffay on the hit, implored fans to ‘text FRIENDS to 26797 to make sure you are registered … and tag your friends below to remind them to check their registration.’

Aniston shared a picture of herself playing Rachel Green on the show, looking dismayed with a white top on that read USA.

The A-list actress wrote over the Instagram Stories snap, ‘When you realize there are only 100 days until the election,’ with an emoji expressing concern.

Cox shared a clip from their get-together in which Aniston leaned in to tell her something. 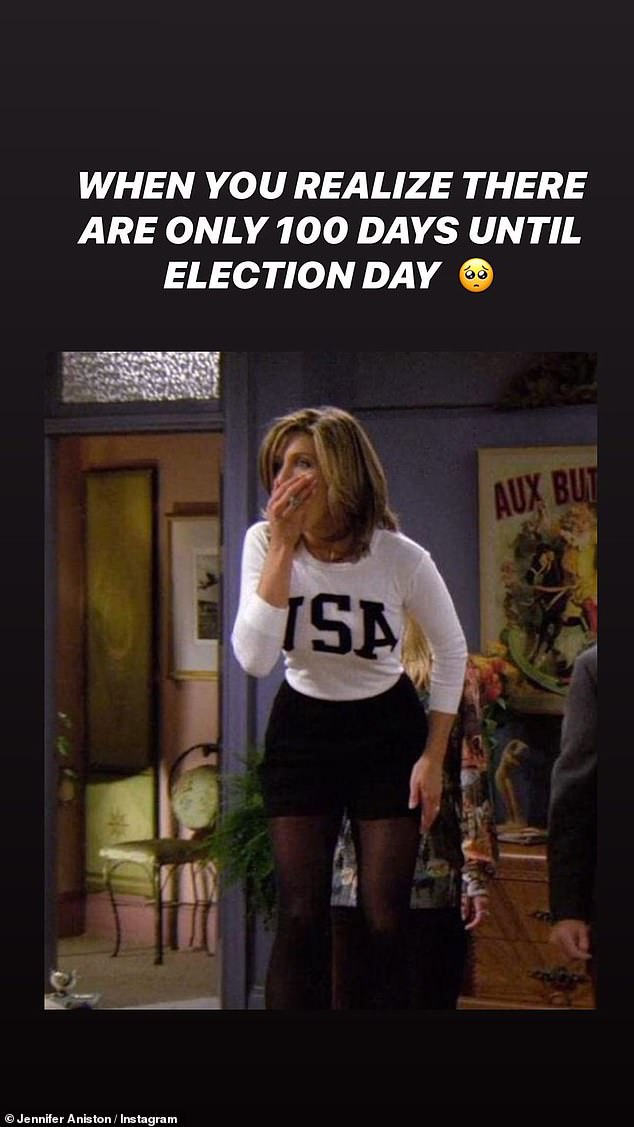 Life imitates art: Aniston shared a picture of herself playing Rachel Green on the show, looking dismayed with a white top on that read USA. 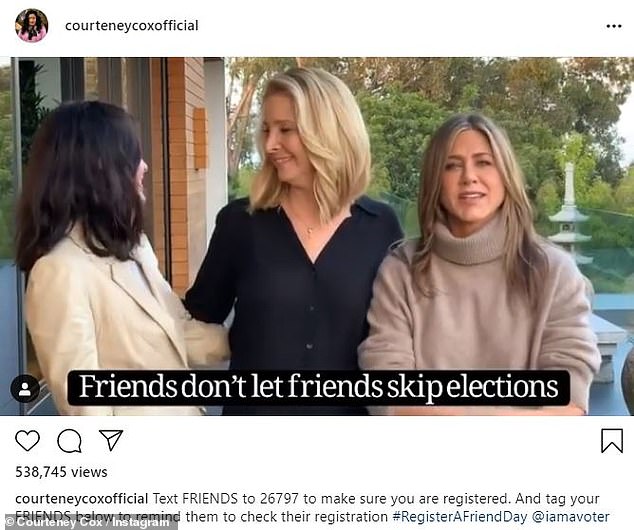 Productive: The TV stars shared a text code to help people and their friends vote 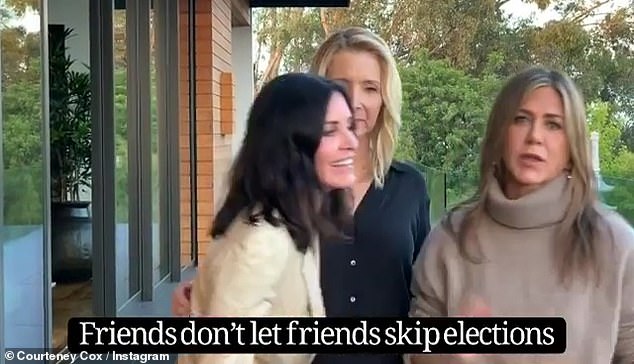 Close-knit: The cast of the NBC staple remains close friends more than 26 years after the series first appeared on the network

Aniston has not shied away from touchy topics in since joining Instagram in October of 2019, and amassing 34.9 million followers in the time since.

Earlier this month, she shared a post of a friend named Kevin who was placed on a ventilator in April battling the coronavirus, and remains recovering from the pandemic.

The Along Came Polly star wrote: ‘This is our friend Kevin. Perfectly healthy, not one underlying health issue. This is Covid. This is real.’

She and Cox have also taken to Instagram to encourage wearing face masks in an effort to slow the spread of the virus.

The stars of the smash hit are are set to reunite with castmates Matthew Perry, Matt LeBlanc and David Schwimmer for a reunion show on HBO Max, though production has been held up amid the COVID-19 pandemic shutdown in the entertainment industry.

Holland is an icon: Here Taylor is seen far left with Charloe Sheen in an image of the cast of Two And A Half Men in 2009 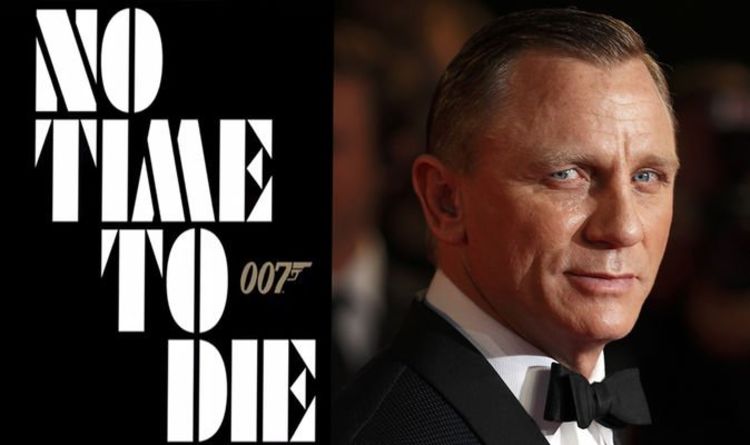 After recent leaked claims that Norton was already in talks with the Bond producers, it seemed the race was run – and […] 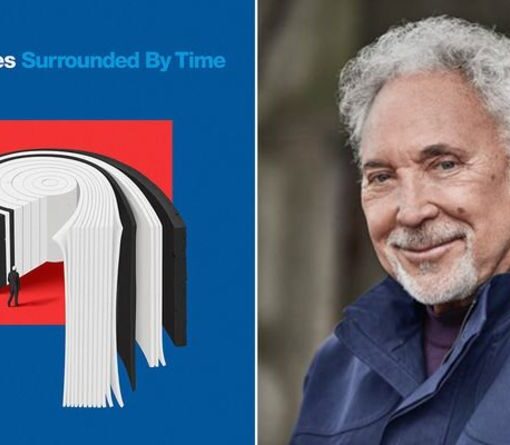 The Welsh singing legend celebrated his 80th birthday last year and while his tour was postponed, he’s been working on a new […] 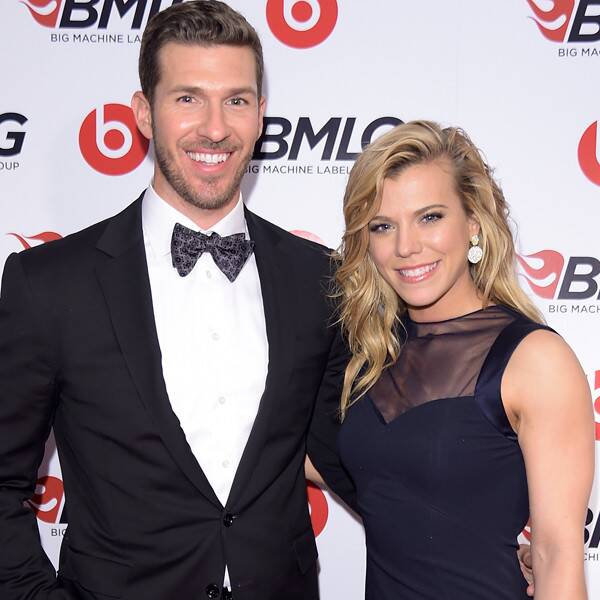 Michael Loccisano/Getty Images for Big Machine Label Group) The Band Perry is getting personal on their brand-new song. On Friday morning, the […]