Miranda Lambert has it all: a chart-topping singing career, a handsome former police officer husband and an enviable bikini body.

And this weekend, the 36-year-old songbird from Texas showed off her figure in a polka dot bikini top and Daisy Duke shorts with sunglasses on an a cocktail in her hand when on a mini vacation with her 28-year-old spouse Brendan McLoughlin.

‘2020 hasn’t offered a whole lot to celebrate, especially for musicians. But I am celebrating this week. I’m celebrating happiness and the feeling of artistic freedom in a time where we all feel a little caged,’ said the blonde beauty whose ex-husband is Blake Shelton in her lengthy caption. 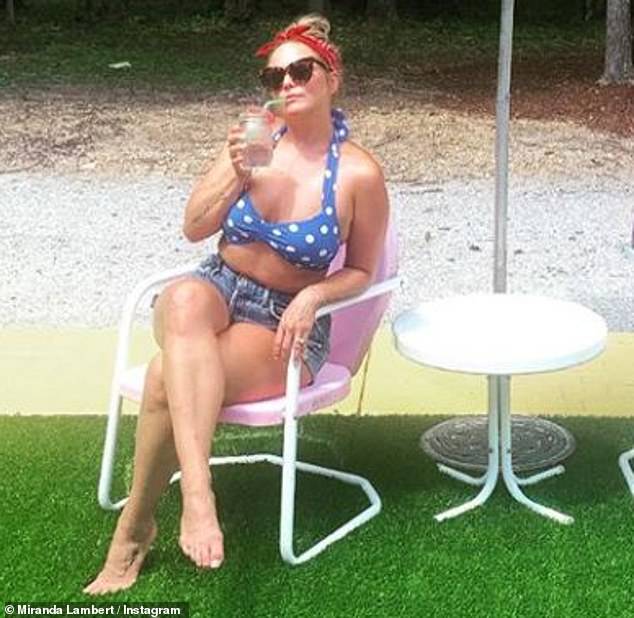 Cute as can be: Miranda Lambert showed off her figure in a bikini top and Daisy Duke shorts when on mini vacation

‘I’m celebrating country music and all the joy it has brought to my life. I’m celebrating ALL the fans, the writers , the musicians, the crews, and bands, radio and streaming services, venues big and small for allowing me to have the most wonderful career for the last 17 years,’ added the performer.

She then said: ‘“Bluebird” is officially a number one song. It’s been 8 years since I had a number 1 on the billboard charts and 6 years on mediabase.

‘I have spent my life doing what I love and I feel more blessed and humbled than ever to have this song of hope resonate with you all. Thank you from the bottom of my heart. And thank you to for allowing me to write this beautifl idea with you and to Natalie Hemby (my Dean Dillon ) for bringing it home. 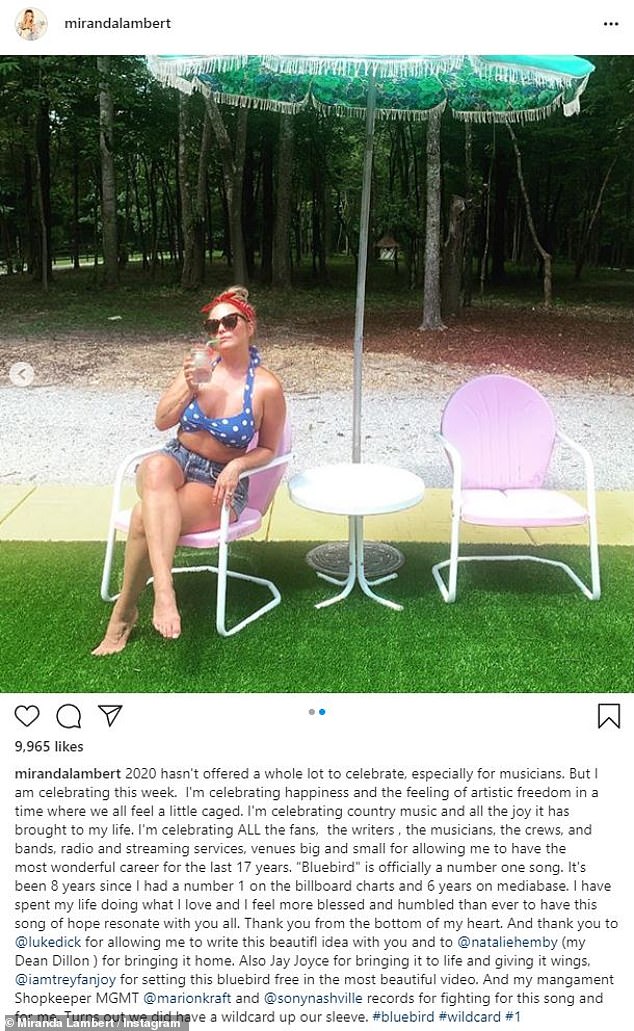 Anotehr hit: ‘“Bluebird” is officially a number one song. It’s been 8 years since I had a number 1 on the billboard charts and 6 years on mediabase,’ she said

‘Also Jay Joyce for bringing it to life and giving it wings, Trey Fanjoy for setting this bluebird free in the most beautiful video. And my mangament Shopkeeper MGMT @marionkraft and @sonynashville records for fighting for this song and for me. Turns out we did have a wildcard up our sleeve.’

Earlier this month she shared a photo of herself and Brendan enjoying some frosty treats in New York City.

The suntanned couple beamed happily as they posed for the picture in front of an ice cream truck. 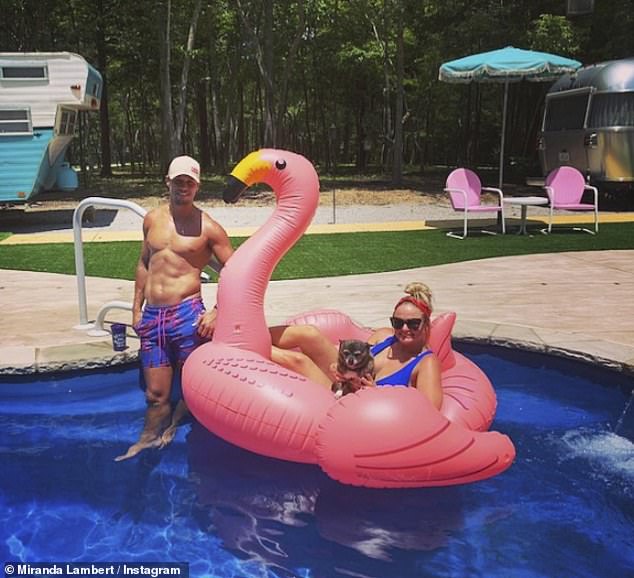 Another snapshot: Earlier this month, the crooner posed with her dog in a pink flamingo floatie as her husband was by her side

In the Instagram caption, the country music star explained: ‘I grew up on a dirt road in east Texas. The closest thing we had to an ice cream truck was mom’s homemade cool-aid freezer pops. Sometimes after school we got a Dairy Queen blizzard. (Can I get an amen on the Oreo blizzard anyone? ).’

She went on: ‘Yesterday while hanging out with my NY fam, a truck stopped by for all the kids. I picked a rainbow snow cone.’

Lambert shared: ‘I don’t like adulting that much so anytime I can just follow the music of the ice cream truck to happiness I want to. From now on If you see me running you know why. I’m either running to ice cream or running it off! #purejoy #icecreamyouscream.’

The singer and the former NYPD officer tied the knot in January 2019, three and a half years after her high profile split from Shelton. 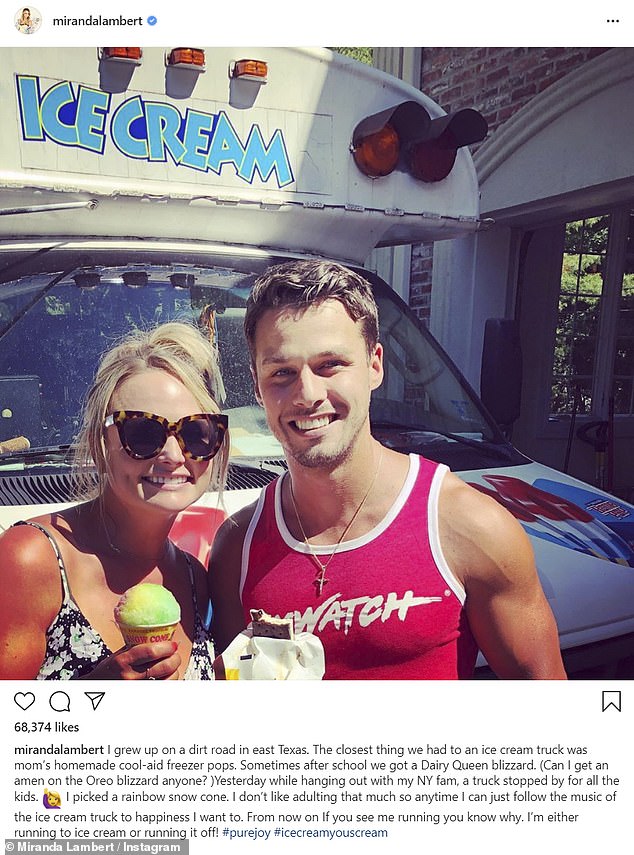 Happy together: Lambert shared a photo of herself and Brendan enjoying some frosty treats from an ice cream truck in NYC earlier this month 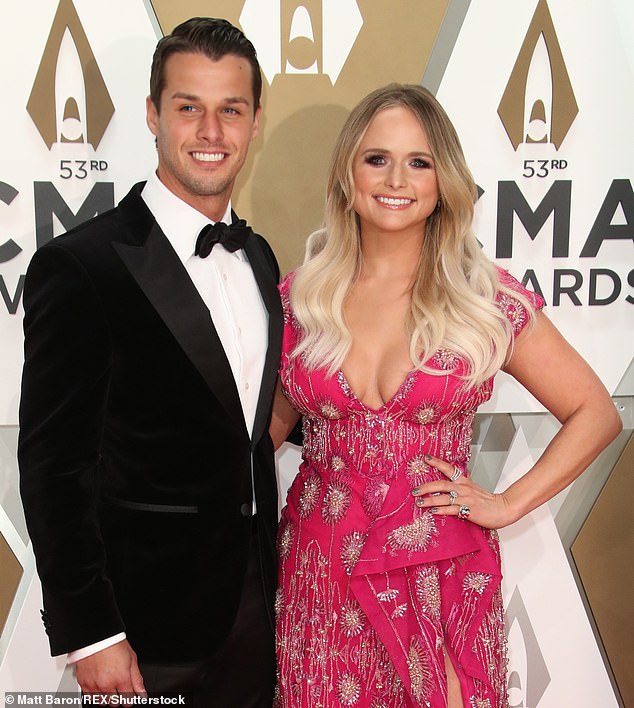 Couple: The country music singer, 36, married the ex-NYPD officer, 28, in January 2019, three and a half years after her high profile split from Blake Shelton. Pictured in November 2019

In May, Lambert and McLoughlin traveled from Nashville through West Virginia and Pennsylvania to New York in their brand new Airstream Globetrotter.

The Weight Of These Wings hitmaker had to postpone her planned tour this year due to the COVID-19 crisis and admitted she misses being out on the road.

‘We camped our way to see our NY family. 6 days: 4 states: 1000 miles,’ she shared via Instagram as she posted several photos from the journey.

At the beginning of May, Lambert reflected on spending time in self-isolation with McLoughlin at their Tennessee home.

‘I’ve only gotten to spend some real time in a few of the places I’ve been. After spending these last few months at home ( a much needed break and time to nest❤️) I realized something,’ she explained to her fans.

She concluded: ‘I know that seeing the world through the windshield again will bring creative vibes.’ 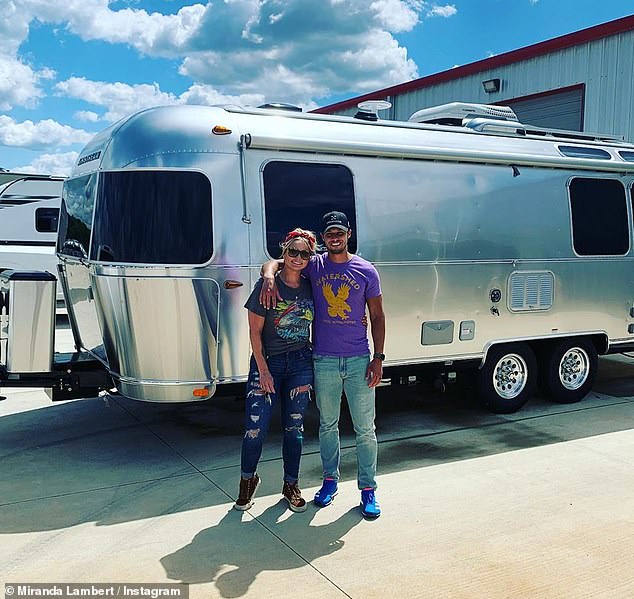 On the road: In May, Lambert and McLoughlin traveled from Nashville through West Virginia and Pennsylvania to New York in their brand new Airstream Globetrotter 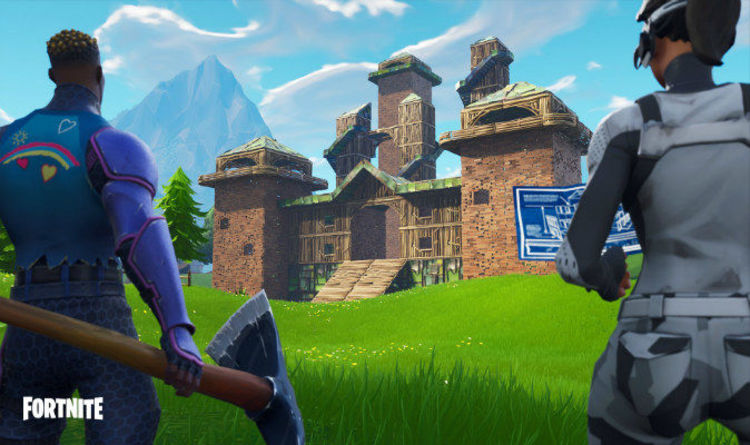 The development team behind one of the world’s most popular games have been slowly releasing new details on its next major patch. […] 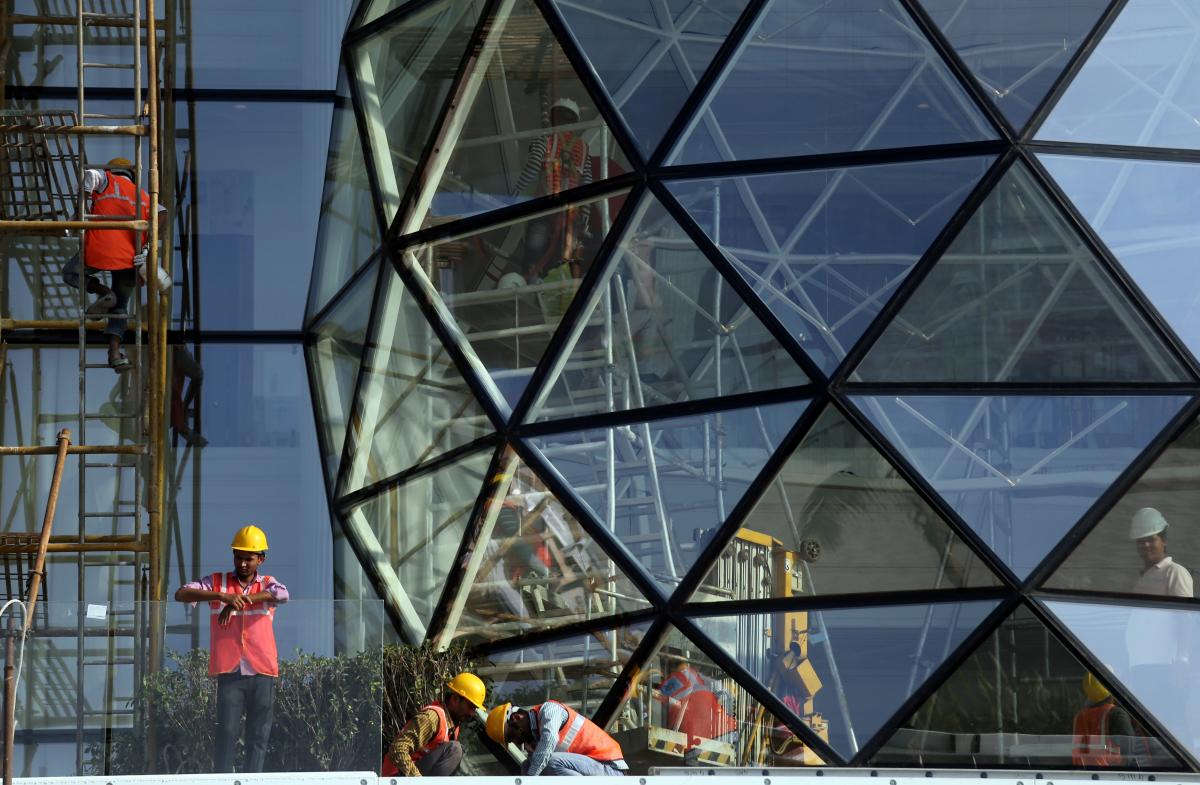 (Reuters) – U.S. singer Beyonce will perform at the wedding of the daughter of India’s richest man, Mukesh Ambani, along with Bollywood […] 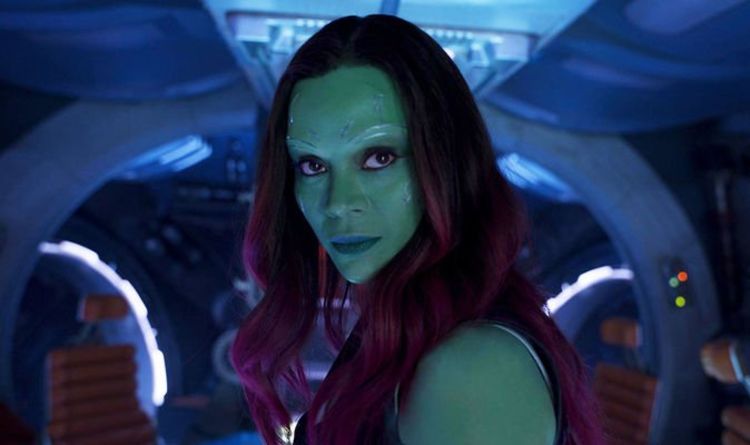 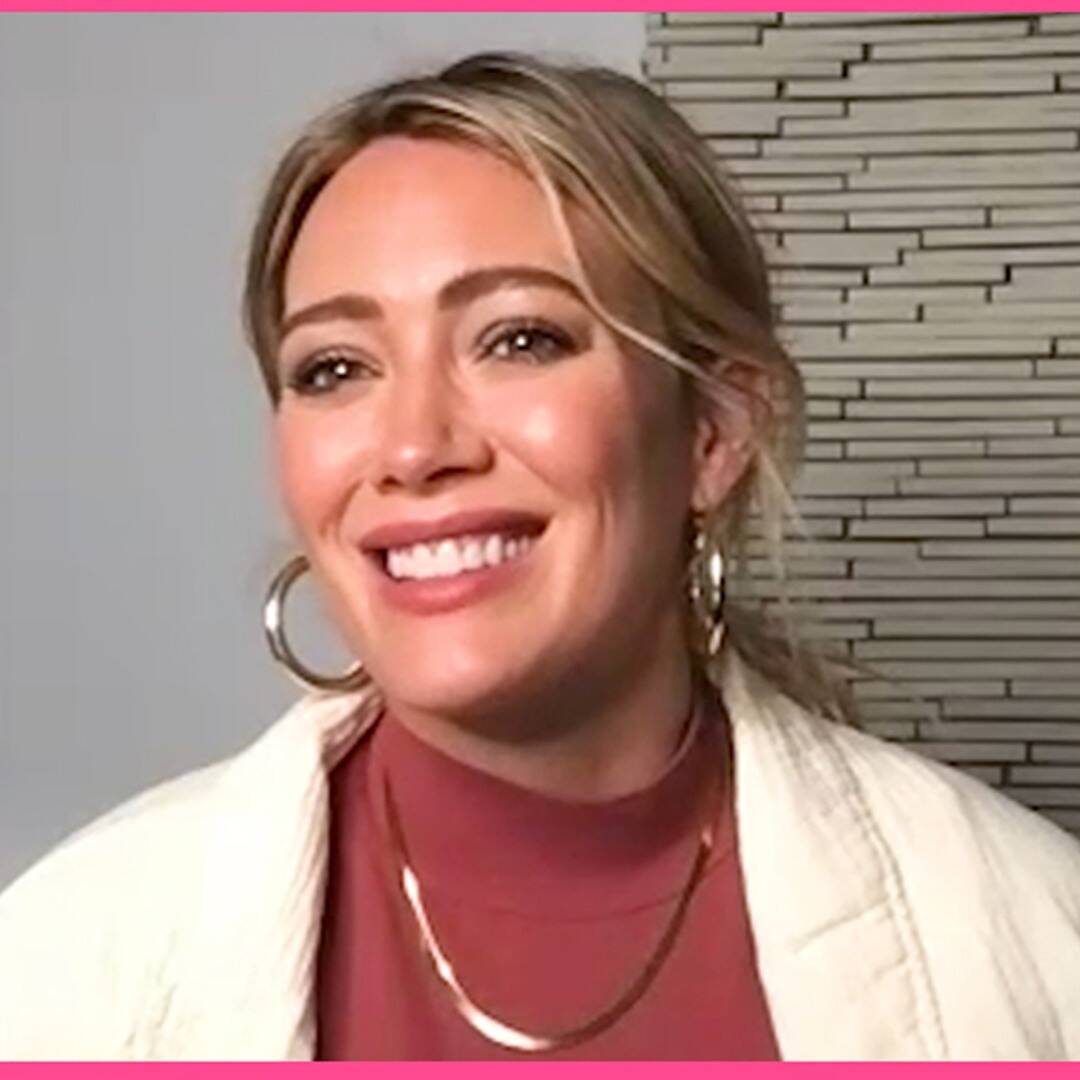 Hilary Duff Is Pregnant! Expecting Baby No. 2 With Matthew Koma Hilary Duff is having a mom-ent! The Younger actress took to […]