55: It’s lashing it down in the East Midlands now. Pouring. I do see some movement on the bench with Ayoze Perez receiving a few instructions. Won’t be long before he’s introduced.

52: “He hasn’t got that spark in his eyes today,” says Gary Neville of Manchester United forward Marcus Rashford. It only takes a second, Gary.

A few goals about early in the second half with Southampton drawing level with Sheffield United, Brighton taking the lead against Burnley and Jeffrey Schlupp making it 1-1 for the Eagles against Tottenham.

48: Big, big challenge from James Justin. Nemanja Matic plays a neat pass through to Anthony Martial. The Frenchman has spun his marker but Justin manages to recover and hook the ball away.

45: Just seen Roy Keane on Sky Sports. He’s looking… very uncomfortable. Rightly so because one goal here changes everything. No changes despite Timothy Fosu-Mensah going through a half-time work out with a member of Manchester United’s staff.

HT: Nervy. It’s been a cagey game throughout. Manchester United and Leicester is goalless at the break. Chelsea scored TWICE in first-half stoppage-time against Wolves to pretty-much secure their Champions League status.

James Justin then fails to deal with a looping ball that Marcus Rashford collects and scoops over the crossbar.

38: Watford are saying goodbye to their Premier League status. They trail Arsenal 3-0 and look certain to be relegated. I suspect many will be saying ‘shouldn’t have sacked Nigel Pearson’ but I suppose it is what it is. Interesting side-note is that Pierre-Emerick Aubameyang has his second of the afternoon and is now one behind Jamie Vardy in the race for the Golden Boot.

35: Close! Kelechi Iheanacho embarks on another of his runs. Again, he’s not stopped by a Manchester United player before laying it off for Youri Tielemans to roll just wide.

33: Disallowed! Bruno Fernandes has the ball in the net having sweetly converted a lofted pass from Paul Pogba. He wheels away in celebration but the flag was raised and VAR confirms it.

30: Just ticked past the half-hour mark and everything is still to play for.

26: Chance! What an opportunity that was. Kelechi Iheanacho runs the length of the field (quite literally) shrugging off Paul Pogba along the way. He decides to have a crack at goal and it’s rather tame. David de Gea fumbles and then is furious that Jamie Vardy had the audacity to challenge for it.

21: Good grief. Harry Maguire has just stood on the ball inside his own penalty area. The ball could have gone anywhere but he’s lucky to see Nemanja Matic there to mop up the danger. Leicester creeping into things now.

18: Nemanja Matic’s poor pass is intercepted by Wilfried Ndidi. He’s central, about 20-yards from goal but spanks it high and wide. No composure there from the midfielder.

15: Relegation update: Watford are trailing 1-0 to Arsenal and Aston Villa are goalless with West Ham as we speak. The big news, however, is that Bournemouth are winning against Everton courtesy of a Josh King penalty.

13: Lovely ball by Marcus Rashford finds Mason Greenwood but he heads over. The teenager’s movement is great.

10: Booked! Bit silly from Manchester United captain Harry Maguire, who decides to plough through the back of Kelechi Iheanacho. He’s shown a yellow card and will now have to spend the better part of 80 minutes watching his step.

6: Bad news for Watford. They trail to Arsenal 1-0 thanks to a Pierre-Emerick Aubameyang penalty. I think he’s two behind Jamie Vardy now. Manchester United continue to throw bodies forward and Brandon Williams plays a neat one-two with Anthony Martial before he’s ushered out of play.

3: I’ll try to keep you updated with the scores from elsewhere throughout the afternoon. The first thing to tell you is that Newcastle are 1-0 up against Liverpool with Dwight Gayle scoring after about 25 seconds! Title hangover I suspect…

Here at the KP, Manchester United have started the brighter. Anthony Martial had a decent appeal for a penalty having been tugged back by Wes Morgan but nothing was given.

1: PEEP! And we’re underway folks. Remember, a point will be enough for Manchester United at the King Power this afternoon.

“I’m a little bit worried about Kelechi Iheanacho against Victor Lindelof. He will occupy him physically. That leaves Harry Maguire against Jamie Vardy,” Neville said.

“It is critical that the two full-backs tie themselves to Lindelof and Maguire and don’t get encouraged forward too easily. That would worry me. Matic will play an important role but United have to attack. This United side playing for a draw? They aren’t mature enough.

“I am worried but l would be worried if l was Leicester as well.

“These are the days that define you as a manager as well. I am a little nervous for Ole. It would be signs of progress if they finish third. It’s important it goes his way.”

Here are the relegation permutations. I’ve done the maths and it’s not looking good for Bournemouth. Obviously this doesn’t involve either of these clubs in today’s blog but knowledge is power and all that…

Aston Villa will remain a Premier League club simply by matching Watford’s result against Arsenal. That is, of course, unless Bournemouth win at Everton.

Watford’s situation is a little more complicated. IF Aston Villa win at West Ham then the Hornets need to better their result by two or more goals. Against Arsenal.

Also, a win will do if Aston Villa draw. And a draw will be enough of Villa lose.

Bournemouth will stay up if they win AND both Villa and Watford lose. End of.

Time to use that word again. Permutations. Can’t stand it.

Anyway, what do Leicester, Manchester United and Chelsea need to qualify for next season’s Champions League.

It’s fairly simple for Chelsea. They simply have to avoid defeat. BUT… if they lose then they will still qualify if Manchester United beat Leicester.

Manchester United, once again, just need to avoid defeat. If they lose… they will still qualify if Wolves beat Chelsea.

And for the Foxes… they will secure a top-four finish if they win today. A draw is only good enough if Chelsea lose.

Manchester United welcome back right-back Aaron Wan-Bissaka, who replaces Timothy Fosu-Mensah. All the other usual suspects are included.

Brendan Rodgers makes three changes to the side who suffered that 3-0 defeat to Tottenham.

Everything. Everything is on. And it’s all on the television.

Most pointless? Probably Manchester City vs Norwich. Perhaps the Liverpool clash at St James’ Park. Oh… and Burnley against Brighton.

Hello everyone and welcome to our LIVE coverage of Leicester vs Manchester United from the King Power.

Well… we’ve reached the final day of the season.

At one point I’d have bet the mortgage that I don’t have on the season being declared null and void.

But two months on we finally have our Super Sunday. C’mon, we’ve earned it.

The title was decided in about December, but there’s still plenty up for grabs at either end of the table. Champions league, Europa League and relegation battles galore.

I’ll go into that in a little more depth shortly. But let’s have the team news and line ups first, shall we?

Manchester United will assess both left-back Luke Shaw and centre-back Eric Bailly ahead of today’s showdown at the King Power Stadium.

Harry Maguire is poised to become the first Manchester United outfield player to start every game in a league season since Gary Pallister in 1994-95. 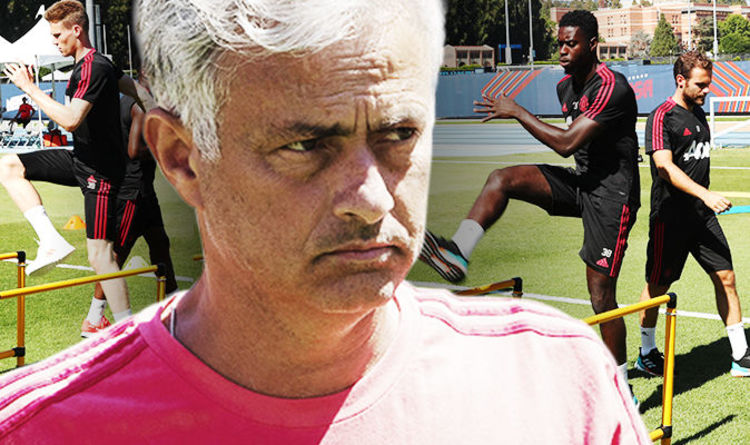 Mourinho believes United are still two players short of having the squad to challenge for the title, and was tight-lipped when asked […]

The good news from Rugby Australia’s annual general meeting on Monday was that the game is still solvent. But after the game’s […]