SAM TURNER’S TIPS FOR THE DERBY: Frankie Dettori can beat draw to set up a Classic double on English King at Epsom… and the rest of the best bets for Saturday’s racing

By Sam Turner For The Daily Mail

English King may not have found favour with the draw gods but he is still fancied to rule over his Investec Derby (Epsom, 4.55) rivals on Saturday afternoon.

Historically, stall one has been a tough position to overcome with 1999 winner Oath the last horse to manage victory from the outside berth, and only three winners since 1969 have managed the feat.

The bookmakers were quick to ease English King in the betting once news of the draw emerged but that may prove hasty as the decision by connections to utilise Frankie Dettori may prove a masterstroke. 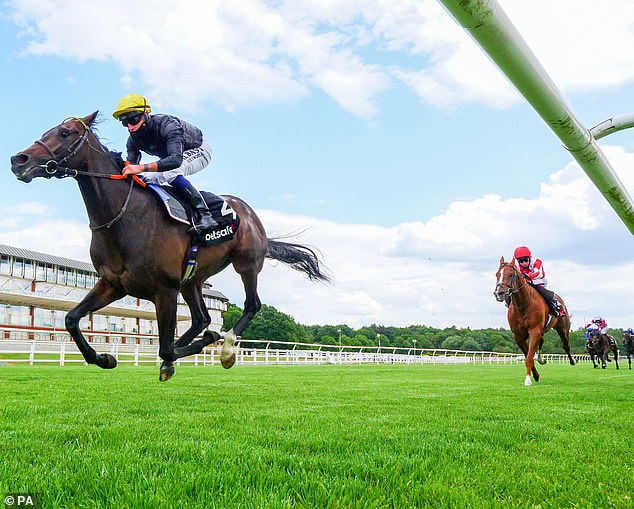 The Italian takes his 25th ride in the world’s greatest Flat race and will arguably require all of his Epsom knowledge to deliver a third Derby win on Ed Walker’s talented colt.

However, English King displayed a number of useful attributes when landing the Lingfield Derby trial, not least the ability to travel well before quickening smartly off a strong pace.

He also proved a well-balanced individual given how he handled the turn into the Lingfield straight and the form of his comeback win was enhanced by the runner-up filling the same position in the Queen’s Vase at Royal Ascot.

For the first time in the race’s history, the 241st Derby will be run behind closed doors. Epsom and Walton Conservators have approved a three-and-a-half-mile fence around the racecourse to keep fans out.

Owners will be allowed into the course but will be restricted to a separate zone. They can only stay on track for a limited time around their horse’s run. There will be a presentation for the winning jockey and trainer, then the owner.

The race has been pushed back to its latest-ever time of 4.55pm in the hope of attracting a bumper TV audience.

Prize money has been slashed by two thirds, with the Derby now worth £500,000.

With English King drifting because of his stalls position, near neighbour Mogul in gate two has arguably been the best-backed horse of the week, despite posting a subdued comeback at Ascot behind Pyledriver in the King Edward VII Stakes.

It would be easy to write off his chance, given how he folded tamely into fourth at the furlong marker and was passed by Mohican Heights.

However, he looked like a horse which was desperately in need of the outing and the fact Ryan Moore rides the son of Galileo in preference to Hampton Court winner, Russian Emperor, suggests he doesn’t particularly rate that event as a valid Derby trial.

If Mogul is a strongly-backed second favourite, housed in a potentially tricky stall alongside English King, there is a theory Pyledriver and Mohican Heights, both of whom finished in front of him at Ascot, are overpriced.

The last named also appeared to be ridden with an eye on Saturday’s prestigious contest and, as a juvenile who won over a mile, he looks sure to progress for a stiffer test at 12 furlongs.

That may not be the case for Guineas hero Kameko, who appears likely to stay in excess of a mile given his run style, but Saturday’s trip and tackling proven middle-distance foes may find him out.

I can’t help thinking Kameko would have lined up in Sunday’s Coral-Eclipse Stakes if three-year-olds had been allowed this year and I’ll rely on Dettori to ensure English King’s Epsom coronation instead.

FRANKLY DARLING (Epsom, 3.40) may well set the Italian maestro on the road to a Classic double in the Investec Oaks.

The daughter of Frankel, trained by John Gosden, has inherited traits from her father as she was arguably too keen in the early stages of the Ribblesdale Stakes at Royal Ascot before landing the Group One prize.

She must settle a little better but she is fancied to trouble 1,000 guineas. 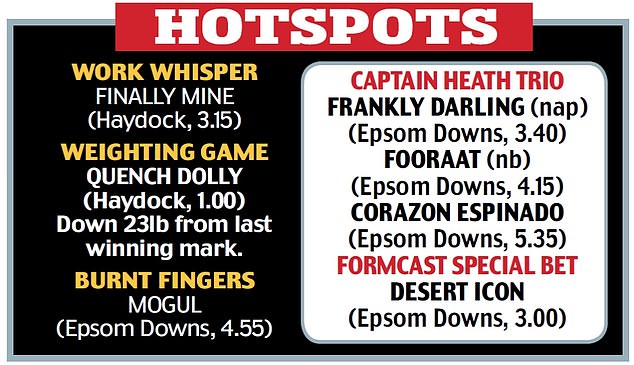 'I didn't know if I wanted to box again': Barry McGuigan opens up on tragic fight with Young Ali