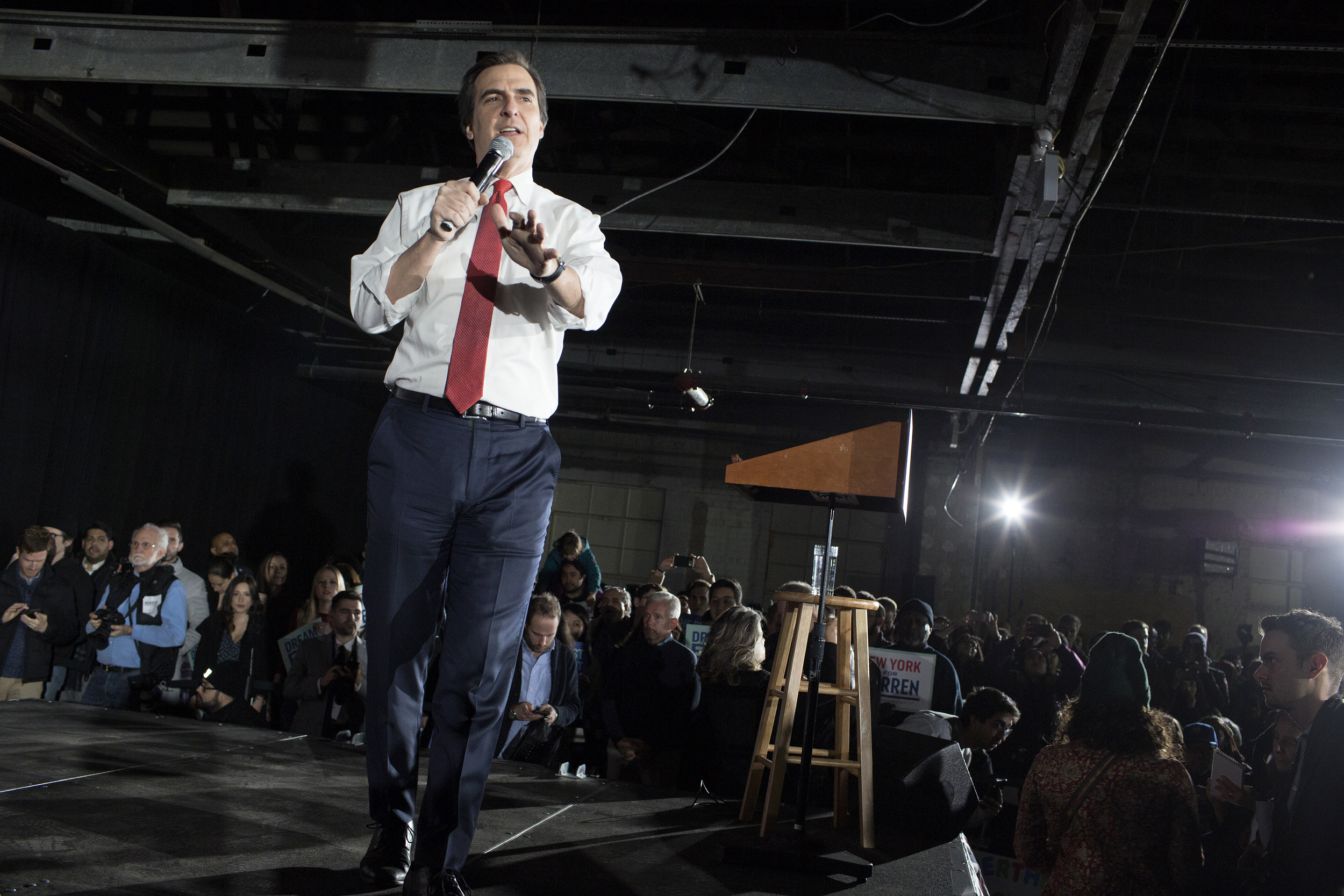 At least seven New York Democratic politicians have announced they will be redirecting campaign donations from police and correctional officer PACs to bail funds and other mutual aid organizations, as protests of police brutality against black men unfold across the country.

“There’s a problem that’s systemic and I’m tired of hearing that issues of police abuse are the result of a few bad apples when we see more and more apples rotting every single day,” state Sen. Michael Gianaris told NBC News. “We need serious reform, and that doesn’t involve isolating the worst cases that everyone’s outraged about and saying that it’s only them, because that’s obviously not the case.” Gianaris announced Sunday that he would be donating the more than $10,000 he’d received from law enforcement organizations this cycle.

Gianaris added that he had been “broadly aware” of the donations from such organizations, but that he unaware of the exact amount and was moved to re-donate the funds after aggressive policing tactics were further highlighted at recent New York City protests. The protests were sparked by the death of George Floyd, a black man who died last Monday after a white police officer pinned him to the ground and put his knee on his neck for about eight minutes. The officer was arrested Friday and charged with third-degree murder.

“When your community is suffering the way they are, there needs to be no question and absolute clarity about which side of the line you’re standing with,” Queens Assemblywoman Catalina Cruz, who will donate the $1,000 she received from police PACs, said. “Our communities are saying, ‘We can’t take this anymore’ — they’ve been saying it for decades — we need to make the line extremely clear so there’s never any doubt who we’re representing and what we’re fight for.”

It’s time to draw a CLEAR line in the sand.

“Seeing how there is so much hate and family destruction, we need to show solidarity to the movement, to the victims and support the change we want to see by putting our money where our mouth is,” Fernandez said. “With that right there, I made the decision and I’m happily going to donate to the Kalief Browder Foundation, that also helps with bail reform and stopping the school-to-prison pipeline.”

The Kalief Browder Foundation has a special meaning to Fernandez, as Browder was a Bronx resident and his brother, Akeem, is still one of Fernandez’s constituents. After allegedly stealing a backpack in 2010, Browder, then 16, was arrested. He spent three years in jail at Rikers Island jail awaiting trial, two of which he passed in solitary confinement. Browder was released in 2013 and died by suicide two years later.

“I’m tired of going to these vigils and seeing the horror of our communities happen,” Moya said of his decision to re-donate the money, noting that it took five years for the officer who killed Eric Garner to be fired. “I feel we can no longer be part of this, enough is enough. If we don’t do something here, I don’t know how we can continue to move on as a society.”

How the chain for re-donating began

While the protests and their spotlight on aggressive policing tactics undoubtedly inspired these politicians to re-donate contributions from law enforcement organizations, some of them were also compelled to do so by activists, including Aaron Fernando, a 19-year-old college student who created a spreadsheet using data from the Federal Election Commission database outlining the amount of money New York Democratic leaders were awarded by police and correction officer PACs.

Fernando said he independently began compiling the data on May 24 upon noticing that some Democratic leaders “were taking a substantial amount of money from law enforcement unions.” He posted the spreadsheet to social media, where it has since been shared widely. Several politicians who choose to re-donate police-associated contributions referred to Twitter posts, including those with the spreadsheet, as an impetus.

“Some officials will go on the record and say they sponsored a bill against solitary confinement and then they take money from police or correction officer unions and that’s a clear conflict of interest,” Fernando said. “Taking police money implies that you’re actively OK with cops murdering black men or torturing people in jails.”

According to Fernando, Simotas was the first politician to announce via Twitter that she’d be putting the funds from law enforcement organizations towards supporting bail funds after Zohran Mamdani, her challenger in this year’s primary, tweeted the spreadsheet. Simota’s tweet sparked a series of similar announcements.

“As politicians, we have to take bold action to force the police to change and I will do everything in my power to make that happen,” Simotas said.

I stand with our community, there won’t be peace until we all draw a clear line in the sand and fight for whats right. All day every day. Like @AravellaSimotas…I will also be donating the $1,000 my campaign received from law enforcement unions to a bail fund. https://t.co/CdQBOJKIlZ

The spreadsheet, which records contributions from 2018 to present day, has thus far has proved to be a means of leverage, a tangible way to measure a politician’s support for criminal justice reform, Fernando said, adding that people across the country have reached out to him with their own data, trying to tailor his spreadsheet to analyze their local politicians’ contributions.

“It’s crazy that there hasn’t been an accessible way to determine how much police money officials have been taking but I’m glad that this moment is causing people to really take a look at that and hold their officials accountable,” Fernando said.

His work has not been without controversy, however. Sen. Brian Benjamin suggests Fernando’s spreadsheet is not entirely accurate and “disingenuous.” Benjamin said he has “never taken money from the NYPD” and that by not outlining exactly where representatives are getting this “so-called cop money” from, the spreadsheet makes it appear as though certain legislators are not “focused on the issues.”

“I’m hearing I’m taking all this money, and I’m like, what are they talking about? Come to find out, they’re talking about SUNY Police, forest rangers, highway troopers. These are not the people who are generating all the angst,” Benjamin said. “But the average citizen doesn’t have the time to figure out ‘no, this is the SUNY Police, the forest rangers, not the NYPD.'”

The distinction between NYPD and SUNY Police, forest rangers and corrections officers is important, says Benjamin.

“There’s an underlying accusation of the spreadsheet that you’re not interested in police reform because you’re taking money from the NYPD,” Benjamin said. “For me this is very emotionally charged … There are Black men, Latino men whose lives have been devastated by the NYPD. I grew up around that. This is not a theory for me or some exercise … Don’t try to create an image that’s completely inaccurate particularly when I’m so active on those issues as it relates to the black and brown men in my community.”

He added that he while he will not return the bulk of the donations outlined in the spreadsheet, he plans to donate $1,000 to address “the food insecurity that is ravaging black and brown communities” and notes that there is no spreadsheet denoting the amount of money representatives donate out of their own pocket to help their constituents — especially in light of America’s surging unemployment rate amid coronavirus.

“We’ve used campaign funds to pay for funerals, food,” Benjamin said. “We don’t do it for the credit, we just do the work because it’s the right thing to do.”

Fernando, for his part, says the spreadsheet is “fluid” and constantly evolving. He is currently working out how to categorize different unions and whether to include them in the count.

“I’m not an expert on this. I’m just a guy with a spreadsheet,” Fernando said, acknowledging that he originally erroneously counted contributions from the Bridge and Tunnel Officers Benevolent Association in counts, because he thought they were associated with the police. “But any person can verify these numbers themselves by checking individual politicians’ disclosure reports.”

Cheetahs' faces are covered in gore after feasting on a kill

Man charged with sexual assault of woman he met on eHarmony

In Los Angeles, a cafe shields diners from virus with private greenhouses

July 8, 2020
Police have identified the 82-year-old man who opened fire on a family at their Florida home - killing a father and his 11-year-old daughter...