What if your favorite blockbuster science fiction movie were true?

When we watch a work of fiction, we enter an understanding with its makers. We agree to suspend our disbelief, and they agree to entertain us. If it’s a particularly good work, perhaps it inspires us by communicating some kernel of wisdom about human nature. Its story may touch our emotions deeply, but we know it’s the product of imagination and artistry. It’s not bound by facts.

Cosmos: Possible Worlds delivers everything a great science fiction movie delivers, except the fiction. It uses the same tools and tactics — powerful visuals, soaring music and, most importantly, wonderful stories. Mined by hunters and gatherers who excel at finding treasures with deep resonance, those stories are told by a gifted communicator. And they’re true.

Although Cosmos adheres rigorously to what is objectively true, it is in no way limited by the facts — it’s the facts that make it so beautiful.

Voyage of the Imagination

Cosmos: Possible Worlds is the third season in the Cosmos series, which creator, executive producer, director and writer Ann Druyan began 40 years ago with her late husband, Carl Sagan.

Joining Druyan this time around are executive producers Seth MacFarlane, Brannon Braga and Jason Clark. Astrophysicist Neil deGrasse Tyson is the host. The 13-episode season kicks off on National Geographic on March 9.

The series takes viewers on a voyage through time and space, starting with the Big Bang and crossing the veil of the present to imagine far-distant worlds in a far-distant future. It’s fueled by VFX, animation, dramatic re-enactments, and a wealth of scientific information that seems to float effortlessly from the screen to the viewer’s mind and heart. 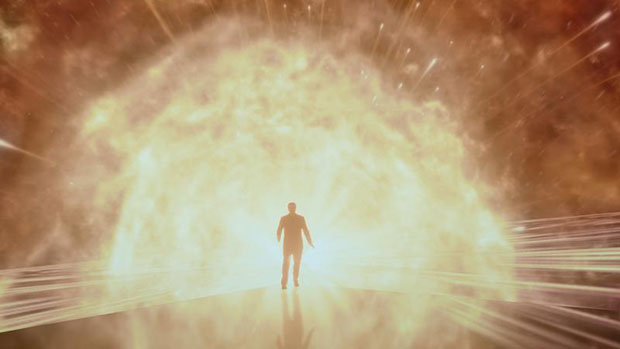 Host Neil deGrasse Tyson is silhouetted against the birth of the cosmos — the Big Bang — at the inception of the Cosmic Calendar and its vast 13.8 billion years of cosmic evolution.

Its aim is not only to relate scientific truths, but also to encourage us to imagine future possibilities. Cosmos pulls back the curtain to reveal some of the wonders that may lie ahead.

When the show veers into speculation, it lets us know. That speculation is not free-wheeling, however. It’s underpinned very carefully with scientific knowledge, and vetted by experts in their fields.

This season of Cosmos offers a vision of a hopeful future — “not the dystopian ruined future that we see so many times,” Druyan said last week during a panel discussion at the Television Critics Association 2020 Winter Press Tour in Pasadena.

It’s “a science-based dream,” she added.

It does that in part by encouraging self-reflection, according to Druyan. 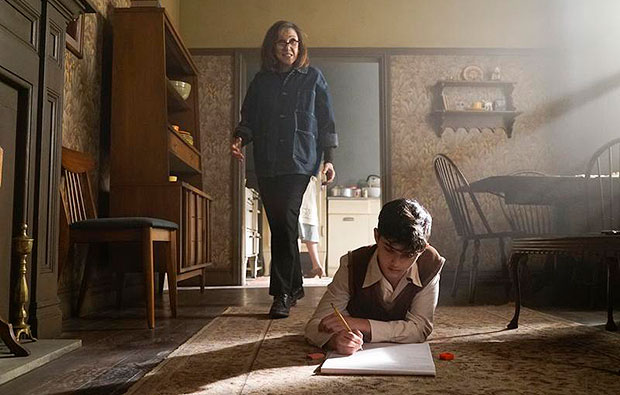 Executive Producer Ann Druyan walks through a scene with Elizardo Torrez, who plays a young Carl Sagan, on set in his family’s apartment.

Though Cosmos: Possible Worlds is passionately truthful, it is also storytelling at its core, and it touches viewers’ emotions in much the same way as other great works of art often do.

“When you watch it you’re not thinking ‘documentary,’ you’re thinking something else — I don’t know if there’s a word,” remarked Tyson, also on the panel.

It shows us a future we hope for, he added.

One of the messages of Cosmos: Possible Worlds seems to be that our distant descendents won’t have a future unless we look unflinchingly at the state of our planet today and recognize humanity’s responsibility to preserve it — and that requires having the facts straight.

Cosmos is not at all ponderous or preachy, however. One of the hallmarks of the show, going back to the first season with Carl Sagan, is to present science in a way “that doesn’t make you feel bad for not having known it in advance,” Tyson said.

There’s a sense of comfort in “learning for yourself what is true, and then taking advantage of that newfound power of knowledge and insight to become a better shepherd of your civilization. I think that’s achieved in this season of Cosmos as never before” he added.

How can Cosmos prevail against science deniers? For example, 30 years ago few people would be inclined to embrace the notion that Earth might be flat, an audience member said, but now there are international societies promoting the belief.

What Cosmos aspires to do is “to empower every single one of us,” Druyan responded. “We are telling a great story, and it’s the closest thing to the truth that we very-flawed humans ever get a hold of. I think there’s no better way to combat the failure of the imagination that makes someone believe in a flat Earth than to inspire them, and engage them, and bring them in.”

“It matters what’s true,” she said. “We have to communicate that value to everyone.”

February 27, 2020
(Reuters) - The coronavirus epidemic could impact the National Hockey League’s plans to have preseason games in China later this year, according to a...

Coronavirus warning: Expert reveals what you must do ahead of Easter...