CHICAGO (Reuters) – Bettie the beagle, a detector dog for U.S. Customs and Border Protection, picked up the scent of pork on a woman arriving from China at Chicago’s O’Hare International Airport.

Soon the dog’s handler discovered and confiscated a ham sandwich in the purse of a passenger who had flown on a China Eastern Airlines flight from Shanghai.

The danger? That the food might be contaminated with African swine fever and spread the disease to the United States. China has lost millions of pigs in outbreaks of the disease, pushing its pork prices to record highs, forcing purchases of costly imports and roiling global meat markets.

“It’s very likely it may come here if we aren’t more vigilant,” said Jessica Anderson, the handler for the pork-sniffing dog and an agricultural specialist for the border protection agency.

Bettie is among an expanded team of specially trained beagles at U.S. airports, part of a larger effort to protect the nation’s $23 billion pork industry from a disease that has decimated China’s hog herd, the world’s largest. Governments worldwide are scrambling to shore up their defenses as the disease spills over China’s borders, according to Reuters reporting from nine countries. The efforts underscore the grave threat to global agriculture.

African swine fever has spread to Southeast Asia and eastern Europe, with cases found in Vietnam, Cambodia, Laos, Korea, Myanmar, the Philippines, Poland, Belgium and Bulgaria. Around the globe, those countries and others that have so far sidestepped the epidemic are cracking down on travelers, increasing cargo screenings and banning meat imports. 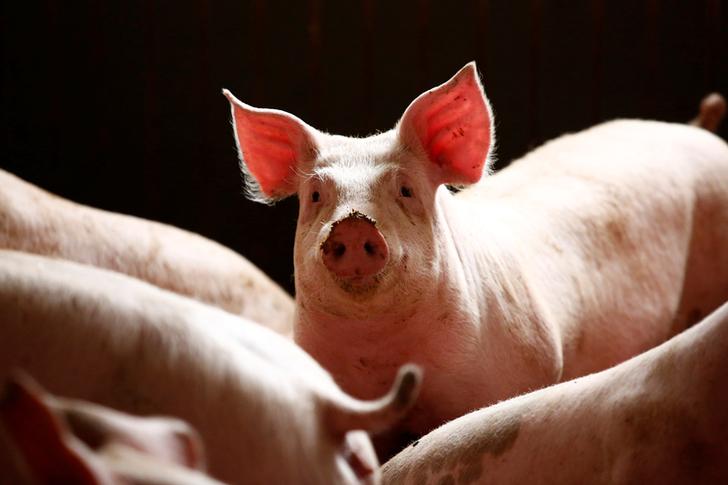 Pork-producing countries stand to lose billions of dollars if the disease infects their industries because outbreaks devastate farms and shut export markets. African swine fever does not threaten humans but there’s no vaccine or cure for infected pigs.

If the disease enters the United States, the top pork-exporting nation with 77.3 million hogs, the government would struggle to protect the industry, participants in a four-day drill in September told Reuters.

“If this gets in, it will destroy our industry as we know it,” said Dave Pyburn, the National Pork Board’s senior vice president of science and technology.

The U.S. Department of Agriculture (USDA) simulated an outbreak in Mississippi that spread to the nation’s top pig-producing states, including North Carolina, Iowa and Minnesota. Veterinarians, farmers and government officials gathered at command centers where they tested their capacity to swiftly detect, control and clean up after an outbreak.

The experience showed the U.S. needs to increase its capacity to quickly test pigs for the disease and to dispose of the animals without spreading it, said Pyburn, who participated in the drill.

In China, the top global pork consumer, the disease has been devastating. The exact number of hog deaths is not known. Rabobank estimated the country lost up to 55% of its pig herd last year. But the Chinese government has reported smaller losses in the country’s $1 trillion hog sector since the first case in August 2018.

The U.S. government is fielding dogs at airports and seaports, conducting outbreak-response drills and adding capacity to test pigs. France and Germany are killing hundreds of thousands of wild boar that might carry the disease. France also erected 132 kilometers (82 miles) of fencing to keep out wild boar and is planning stricter sanitary rules for pig farming, including requirements to disinfect trucks that transport swine.

Thailand culled pigs in a province close to Myanmar, where the disease has been found. South Korea ordered soldiers on its border with North Korea to capture wild boar, while Vietnam used troops to ensure infected pigs were culled.

Australia expelled travelers from Vietnam for smuggling pork and banned imports of pork products. Australia also deployed advisors to Pacific islands in an attempt to protect its closest neighbors from African swine fever. If such efforts fail, it could cost the country more than 2 billion Australian dollars ($1.4 billion) over five years, according to Australian Pork Limited, an industry group.

U.S. officials plan to suspend domestic shipments of pigs among farms and to slaughterhouses if African swine fever is detected. The USDA and states could issue orders halting the movement of livestock in certain areas as a way to contain the disease.

The USDA said in a statement to Reuters that the September drill highlighted shortcomings in its guidance to states detailing when and how to limit the movement of pigs. The government is also increasing the number of laboratories it uses to test for African swine fever.

“We have identified some gaps,” said Amanda Luitjens, who took part in the drill and is animal welfare auditor for Minnesota-based pork producer Christensen Farms. “The thought of it making it to the United States is scary.”

Travelers transporting meat represent the biggest risk for African swine fever to spread to the United States because the disease can live for weeks in pork products, Pyburn said.

Contaminated food can be fed to feral pigs or livestock in a practice known as garbage feeding, which the USDA says has caused outbreaks of swine diseases around the world. U.S. farmers are supposed to obtain a license to feed pigs with food waste that contains meat and cook it to kill disease organisms.

African swine fever can also spread from pig to pig, from bites by infectious ticks and through objects such as trucks, clothing and shoes that have come into contact with the virus.

China banned the transportation of live pigs from infected provinces and neighboring regions in an unsuccessful bid to contain its outbreaks. It also culled pigs and outlawed the use of kitchen waste for swine feed.

The disease has been detected in food products seized at airports in South Korea, Japan, Australia, the Philippines and northern Ireland.

African swine fever is thought to have arrived in the Philippines through contaminated pork smuggled from China. The Philippines is now conducting mandatory checks on carry-on luggage of passengers from countries with outbreaks.

The government of the province of Cebu in central Philippines banned imported products and those from the main Philippine island of Luzon to avoid swine fever. More than 60,000 pigs have died or been culled in Luzon because of the disease. The Philippines Department of Agriculture also banned garbage feeding that included leftover food from airports, airlines and seaports.

In the United States, low inspection rates at ports of entry increase the likelihood for illegal pork to enter the country undetected, the USDA said in a report assessing the risk from African swine fever. The agency works with Customs and Border Protection to alert all U.S. ports each time a new country is confirmed to have the disease, requesting increased scrutiny on travelers and shipments.

But Customs and Border Protection estimates it needs 3,148 people to specialize in agricultural inspections at entry points like airports and only has about 2,500.

The U.S. Senate last year authorized the annual hiring of 240 agricultural specialists a year until the workforce shortage is filled, and the training and assignment of 20 new canine teams a year. The government approved 60 new beagle teams to work at airports and seaports last year, for a total of 179 teams, according to USDA.

Those teams face a daunting challenge, said Senator Gary Peters, a Michigan Democrat who introduced the legislation with other lawmakers.

“Every day, millions of passengers and tens of thousands of shipping containers carrying food products cross our nation’s borders,” he said, “any one of which could do significant damage to America’s food supply and agricultural industries.”

WHO says China virus 'too early' for emergency declaration

US imposes visa rules for pregnant women on 'birth tourism'

Millions on virus lockdown in China as WHO weighs response

Jasmine Harman weight loss: A Place in the Sun presenter lost over two stone – how?

Wetherspoons to open 15 pubs and hotels across UK to create 10,000 jobs – FULL LIST

Ex-pharmaceutical exec to be sentenced for pushing opioid

China locks down two cities at epicentre of virus outbreak