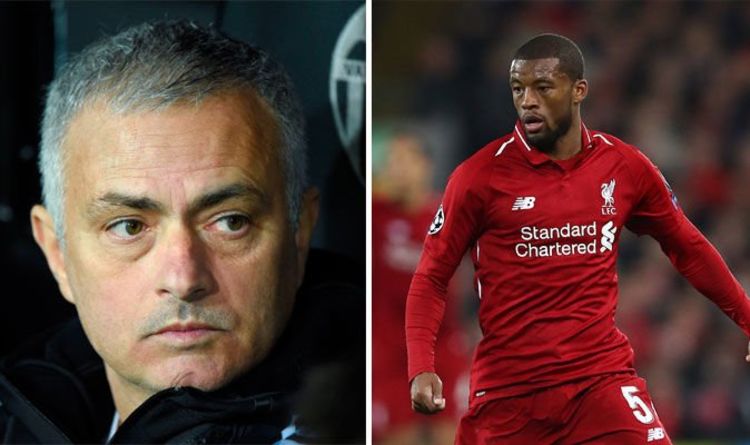 The Reds take on their old rivals at Anfield this weekend, knowing a win will keep them top of the league ahead of the busy festive fixtures.

United, meanwhile are enduring a torrid season and lay 16 points adrift of their cross-city rivals.

It is a changing of the tides for Liverpool after 30 years in The Red Devils’ shadow.

United have won 13 league titles since Liverpool won their last, but Jurgen Klopp’s men are in good shape to win their first top-flight silverware since it was re-branded as the Premier League in 1992.

Wijnaldum, who has proved an invaluable cog in the Reds’ midfield this season, has warned his colleagues not to underestimate United.

The Dutch midfielder cited Liverpool’s troubles in past seasons, saying: “Things can happen, everyone can have a bad season.

“It doesn’t mean they have a bad team: they have good players, a good manager, and they know how to manage games and win games – or not to lose games. It is going to be difficult.”

Klopp has not engineered a win over United in the league since taking over in October 2015, drawing three and losing two.

Jose Mourinho is also renowned for his ability to mastermind one-off victories when everything is against him.

Perhaps most memorable was his 2-1 victory at Anfield in 2014, when the Portuguese donned a scraggy tracksuit and unshaven beard and ruined Liverpool’s title charge with his ragtag Chelsea side.

Whereas his United side head into the match deflated after a 2-1 dead rubber loss in Valencia, Liverpool are buoyed from a 1-0 victory over Napoli, which secured them a spot in the Champions League knockout stages.

“It’s a nice game and we’ll try to put in the same performance that we did against Napoli,” Wijnaldum said.

MLB plan: No showers, no spitting and social distancing

Eto'o celebrated for much more than football in hometown

'Is it Royal Ascot without us?' Irish concern over racing's restarts

No fans but Bundesliga returns

May 16, 2020
Photograph: J. Scott Applewhite/Pool/Getty ImagesPresident Barack Obama and President-elect Donald Trump once sat together in the Oval Office. “I was immediately struck by Trump’s...

Trump seems to be planning something big. His 'Obamagate' comments are a clue.