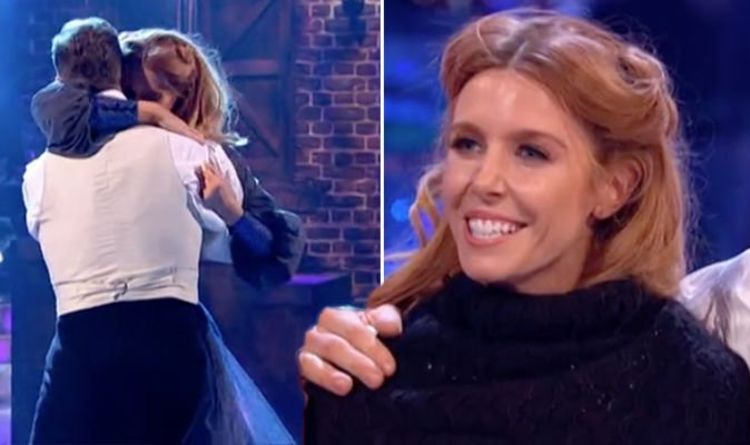 Stacey Dooley, 31, and dance partner Kevin Clifton, 36, appeared on Strictly Come Dancing tonight. The duo performed a classic American Smooth – often considered a tricky dance due to the high levels of elegance that must be conveyed. Stacey and Kevin have been tipped to win, tonight scoring a high 38 points – but what does their body language reveal about their chances? Body language expert Judi James shared her thoughts with Express.co.uk.

“If points were awarded for emotional influence Stacey and Kevin would have scored straight tens from the judges tonight, half of whom seemed to be sobbing so hard it’s amazing they could even reach for the right points paddle.

“Technically it might not have been Stacey’s best number though. She looked tense and a little wary of the lifts and the routine was more about narrative and drama than about the American Smooth that they were dancing.

“Stacey is clearly a good actress and Kevin looked magnificent as Valjean. The couple will clearly have inherited votes from fans of the show who already know the plot they were illustrating but as always Stacey also wins the night when it comes to off-floor personality.

“Forget Kevin, her winning rapport is now with Claudia Winkleman and the pair look more and more like a female version of Ant and Dec every week.

“They are funny and tactile together and are emerging as probably the most interesting duo of the series and fully deserving of their own show to host together.”

Away from Strictly, Stacey is a successful journalist and broadcaster.

But what is her net worth, and what has she done throughout her career?

Stacey first appeared on TV in a documentary Blood, Sweat and T-shirts about workers’ rights in the garment industry.

Later Stacey was given her own series, and her show Stacey Dooley Investigates was aired in 2009.

Since she has participated in documentaries focused on social justice issues including sex trafficking and underage sex slavery.

Thanks to her work Stacey was honoured with a Member of the Order of the British Empire (MBE) in the 2018 Birthday Honours.

Also dancing this week were Lauren Steadman and AJ Pritchard.

The couple were bottom of the leaderboard last week, and are fighting for their place in the final as the show continues.

Earlier today, bookmakers predicted Lauren to be the next contestant to be eliminated from the series.

She has been tipped to follow in the footsteps of Graeme Swann, who left the competition last weekend.

But what did Lauren and AJ’s body language reveal about their chances of staying? Judi James also analysed the couple for Express.co.uk

Fitness: Expert reveals the belly fat burning routine she uses to get a flat stomach

Paddy McGuinness: 'Every day our hearts break' Presenter and wife on health admission

What are the Best Search Engines?