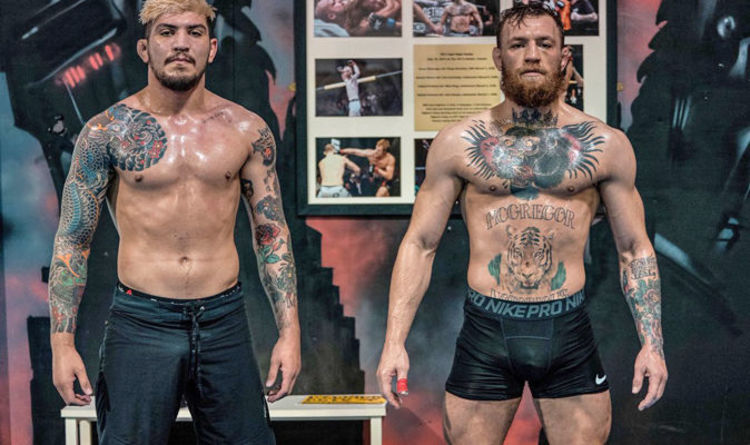 That is the view of former UFC star Dan Hardy.

The Russian attacked Danis having defended his UFC lightweight belt at the T-Mobile Arena in Las Vegas.

Immediately after the fight, he jumped the octagon fence and leapt at Danis, after the two had a verbal exchange.

Hardy explained that Danis, who is a black-belt in Jujitsu and trains McGregor, was an easy target due to his bright blonde hair.

“So Conor is sitting with his back up against the fence, he’s dejected, he was forced to tap, Khabib immediately marched across the octagon and he clearly didn’t have the closure from from the fight, he had rage in his eyes,” Hardy explained.

“He was searching for Conor’s team-mates, Dilon Danis stood up, easy to point, easy to pick out because he has that bleached blonde hair.

“Khabib focused on him, there was a back and forth between them, and security grabbed a hold of Khabib, but obviously if Conor can’t get away from Khabib, the security can’t.

“He jumped the fence and it looked to me from our position like he jumped feet first into a crowd of people aimed at Dilon Danis, and then chaos ensued.

“We then had a couple of guys jump into the octagon, one guy in a red jacket attacked Conor, I believe he is a contracted UFC fighter as well.”

This is not the first time Danis has been targeted by one of McGregor’s opponents.

Before the UFC star took on Floyd Mayweather, Danis was involved in an on-stage scuffle with members of Mayweather’s security team.

Danis brushed off that altercation, but gave a serious statement about his skills.

“They came to the front first, they were running at him (McGregor),” he explained.

“I waited for Owen (Roddy, McGregor’s striking coach) to go, I’m the young one so I thought if I go first I’ll get in trouble.

“Once I saw Owen go I thought, f*** it, then I was just flipping them off as they were trying to stare me down.

“I would have mauled them, they’re just a bunch of juice heads.

“They were trying to stare us down, but this is a different style of fighting, they would have been killed, fast.

“That was a lot of fun, that was awesome.”

Golf: European Tour to resume on July 22 with British Masters

John McGinn: 'We need to keep Villa in the league, no matter what'

'What a little man,' Anderson Cooper reacts to Trump's conspiracy