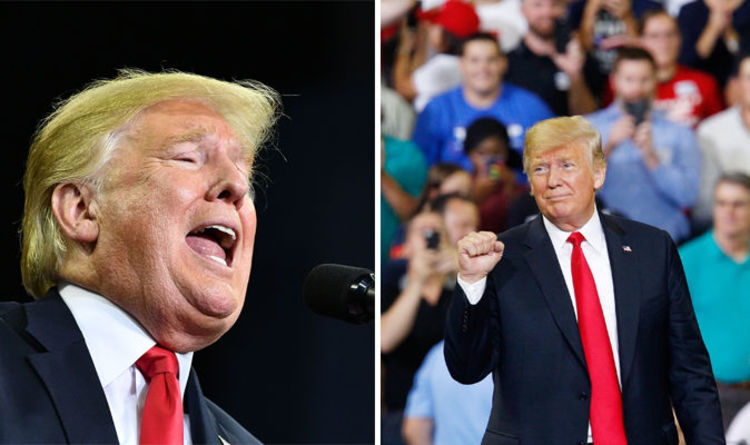 One of the President’s election officials said on Thursday, Trump will deliver a message about “our great American comeback” at the rally in Billings.

Michael Glassier, Chief Operating Officer for Donald J. Trump for President, Inc., said in a statement: “President Trump will deliver an incredible message about our great American comeback at the rally at the Rimrock Auto Arena in Billings tonight.

“Despite what the fake news media tell you, and regardless of what the Democrat obstructionists say, America is coming back stronger than ever.”

The rally comes only two days after the uproar over journalist Bob Woodward’s new book on Trump, which portrays the Trump White House as chaotic and dysfunctional.

On Wednesday, the American firebrand labelled the highly critical tell-all memoir a “work of fiction” and told reporters in the Oval Office “this book means nothing”.

At today’s rally, an audience of 10,000 is expected at the local arena.

Live updates from the rally are below. All times in BST.

01.27am update: Hundreds of Trump fans have lined up early for the rally

President Donald Trump’s fans arrived from all over the country for the rally in Billings.

The first person who began lining up arrived at 10am on Wednesday.

Randall Thom from Minnesota said this is the 39th rally he has been at for Trump and callled himself one of the “Front Row Joes”.

Mr Thom said: “We try and make sure we get to the rally early so we’re front seats.”

01.07am update: President Trump tweets he has arrived in Montana

Donald Trump has tweeted that he has just landed in Montana shortly after 7pm EST (12am BST).

U.S. states share, get creative in hunt for medical supplies

Sanders to keep staffers on health care plan through November

Spanish lockdown likely into May, though coronavirus deaths slow

April 9, 2020
Lindsie Chrisley may be estranged from her famous father, Todd Chrisley, but that doesn't mean she'll stand for such cruelty toward him.On Wednesday's episode of...

What happens if OPEC and Russia don't agree to cut production?

Horror in Spain Turns to Anger Against Prime Minister