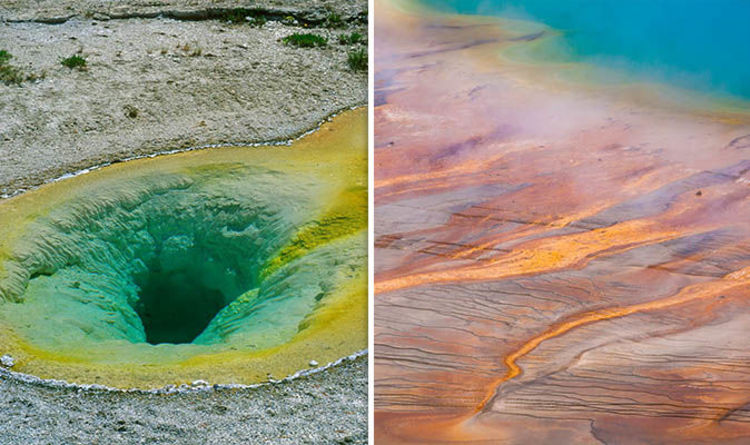 Yellowstone is among a catastrophic breed of super volcanoes which, if they erupted, could have worldwide ramifications.

The volcano is thankfully a dormant beast at the moment, pushing out geysers every now and again, and enduring light tremors.

Activity at the summit is generally little, but the volcano has in the past managed to erupt over hundreds of thousands of years.

If an eruption did occur, the volcano would be able to coat the USA in a layer of ash, and obscure the sun enough to effect plant growth.

Where is Yellowstone volcano?

Yellowstone volcano is located in the Yellowstone National Park, in the western zone of the United States.

Specifically, Yellowstone and its constituent caldera, sit in the Rocky Mountains in the state of Wyoming.

The national park itself is a world-renowned attraction since it was formed in 1872, with the world’s largest collection of geysers.

Geysers are discharges of water from holes in the ground, often high pressure and accompanied by steam, and are spurred by volcanic activity.

The Yellowstone National Park also plays host to a number of American ‘megafauna’, the largest beasts found in the domestic United States.

American bison, which were hunted nearly to extinction in the past, make their home in the park, alongside timber wolves, grizzly bears and the Canadian lynx.

The volcano itself takes up 2,805 metres of the land in the national park.

An eruption from the whole volcano could cause the ‘Big One’ – a catastrophic eruption or earthquake believed to cause untold damage.

Is Yellowstone volcano linked to the Big One?

The ‘Big One’ doesn’t specifically describe Yellowstone, rather the potential for a cataclysmic natural disaster causing horrifying damage.

Yellowstone volcano has the potential to be a major natural disaster, as previous eruptions have proved devastating.

Yellowstone’s largest eruption – which occurred 2.1 million years ago – spat out a massive 2,450 cubic kilometres of debris over North America.

The Island Park Caldera supereruption – another spate of Yellowstone activity – was so large it produced 2,500 times as much ash as the massive 1980 Mount St Helens eruption in Washington.

If this amount of ash was to blanket the United States, the result would be that crops could not grow due to reflective properties of dry ash, which could cause famine.

The results would also induce fast-paced climate change, which would put countries throughout the world at risk of extreme weather conditions.

While the ramifications could be horrifying, this won’t be happening in our lifetime, as eruptions occur over millions of years.

Full-scale eruptions are supposed to take place every million years, so we’re a ways off yet.