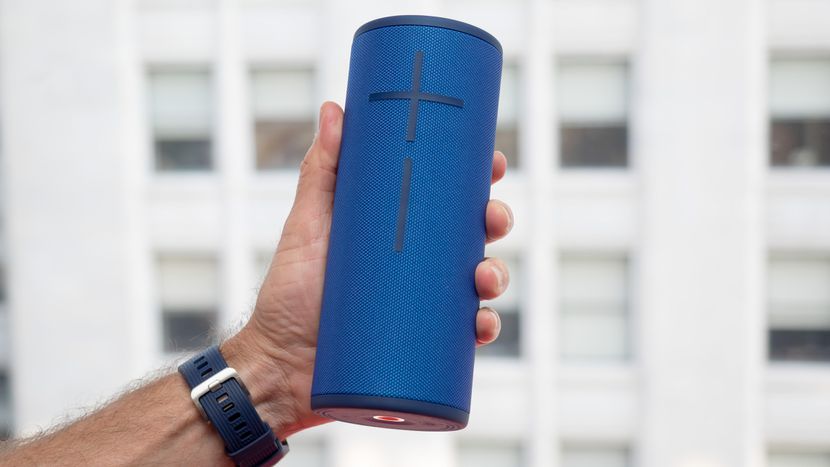 Yes, they’re the same cylindrical shape, but they’ve been redesigned, mostly for the better. The new fabric wrap is supposed to be more durable and the speaker is rated to withstand falls of up to a meter. They’re also fully waterproof and even float if you happen to drop them in a body of water.

The oversize plus/minus volume controls and their mildly religious overtones are back. What’s new is the big button on top of speaker. At first you might think that it’s the power button. But no, the power button is the one flanking it, along with a dedicated Bluetooth connection button.

That new big button is called a Magic Button because it pauses and plays your music and can be linked to up to four playlists from Apple‘s music streaming service — or Deezer, if you’re an Android user. A short press starts your music even when the speaker is off, and a long press advances to the next playlist you’ve stored in memory via the updated Ultimate Ears app. Eventually, we might see Spotify playlists get in on the Magic Button action, but for now it’s just Apple Music and Deezer.

The app also allows you to link up multiple Boom speakers in party mode and adjust bass and treble levels to your liking.

Previous Boom speakers had a threaded tripod mount and came with a metal loop that screwed into the mount. The threaded mount and metal loop are gone, replaced by an integrated canvas loop toward the top of the speaker. I kind of liked the earlier metal version, but the canvas loop seems fine where it is. Instead of the speakers being perfectly vertical when you hang them from something (I’ve attached the Boom 2 ($134 at Amazon.com) to outdoor sconce lighting as well as tree branches using a bungee cord) they now hang at an angle due to the way the speaker is weighted (they also float in water with the heavier end dipping down under the surface).

On the bottom of the speakers you’ll find a charging contact that makes makes the speakers compatible with UE’s charging dock accessory, which costs an additional $40 (£35, $AU50).

You don’t need the charging dock to charge the speaker, however. You can use the included Micro-USB cable, and I do like how UE moved the charging port to an easier-to-access location on the side of the speaker toward the bottom.
Battery life is quite good. It’s rated at 15 hours for the Boom and 20 hours for the Megaboom 3, which is pretty similar to what you’d get from earlier Boom and Megaboom speakers.

From a sound standpoint, I don’t think the Boom 3 is much of an upgrade over the Boom 2, which sounded very good for this type of speaker — particularly outdoors, thanks to its 360-degree sound dispersion. The Megaboom 3 does offer enhanced bass compared to its predecessor and clearly has fuller sound. It also sounds better at higher volumes. Unfortunately, neither of these new speakers links to UE’s Blast or Megablast Wi-Fi portable speakers, which are Alexa voice-enabled. These are not.

The Boom 3 and Megaboom 3 retail for $150 and $200, respectively. That’s less than what earlier Boom and Megaboom speakers cost when they launched. I think that’s a good move by UE because of how competitive the portable Bluetooth speaker landscape is these days. While they’re still not cheap, they’ll certainly be worth looking at if you’re in the market for a more premium model.

New Hope Club: How The Beatles provide 'a lot' of inspiration for band's newest music