The African National Congress (ANC) said that the bill which would have the power to take land away from white farmers to rebalance racial disparities needed to have further consideration.

Nonceba Mhlauli, a spokeswoman for the ANC’s chief whip, said: “The bill in its current form would need to be re-considered in light of the process of reviewing Section 25 of the constitution for the expropriation of land without compensation.

“Were the bill to be re-introduced, it would contain a clause or clauses reflecting expropriation of land without compensation if that is the way that South Africans have chosen to go.”

The government is trying to change the status quo where the white community who only make up eight percent of the populations own 72 percent of the farms.

President Trump tweeted: “I have asked Secretary of State Mike Pompeo to closely study the South Africa land and farm seizures ad expropriations and the large scale killing of farmers.”

Theresa May had pledged her support for the land reform in South Africa but she has emphasised the need to conduct farm appropriations in a “legal and fair way”.

Mrs May has said yesterday: ”The UK has for some time now supported land reform.

“Land reform that is legal, that is transparent, that is generated through a democratic process.

I have asked Secretary of State @SecPompeo to closely study the South Africa land and farm seizures and expropriations and the large scale killing of farmers. “South African Government is now seizing land from white farmers.” @TuckerCarlson @FoxNews 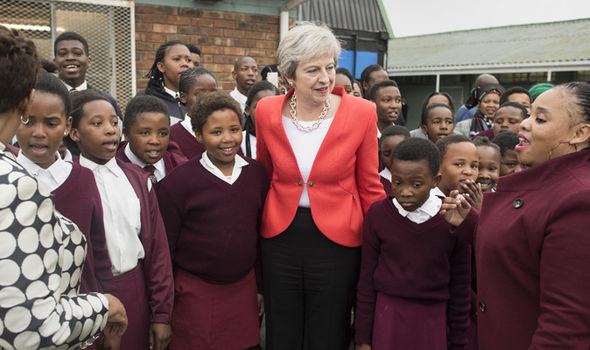 Theresa May has also called for clarity on the new land reforms (Image: GETTY)

“It’s an issue that I raised and discussed with President Ramaphosa when he was in London earlier this year.

“I’ll be talking about it with him later today.” 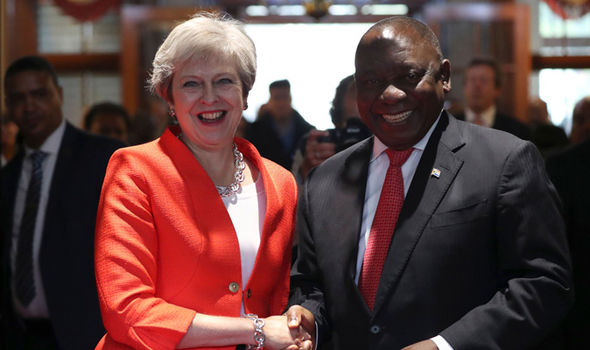 Theresa May has met Cyril Ramaphosa during her visit to South Africa (Image: GETTY)

Nearly 25 years after apartheid ended in South Africa, the issue of land ownership continues to be a divisive one in the country.

The South African government had started to seize land from white farmers, initially targeting two game farmers in the northern province of Limpopo after talks with the owners Akkerland Boerdery broke down over a huge differences in its estimated value.

There has been a rise in violent attacks against farmers in South Africa and between 2016-7, there were 74 farm murders and 638 attacks, mainly against the white farmers.

Keeping Up With The Kardashians is OVER after 14 years on air, Kim announces

Under Armour to lay off 600 employees globally

Plasma should not be considered standard care for coronavirus, NIH panel says