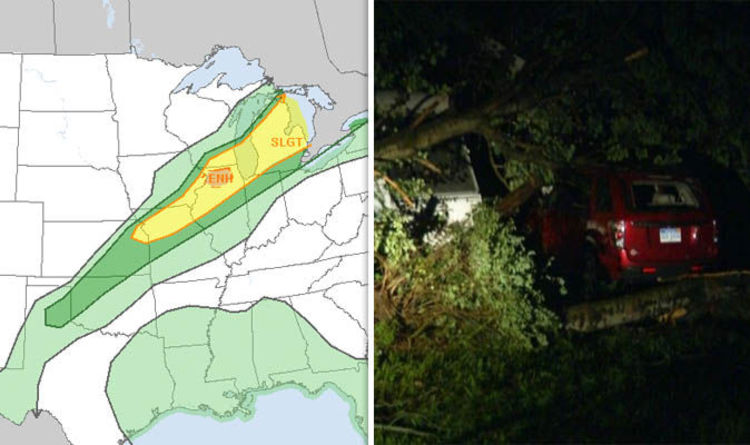 A line of strong thunderstorms is expected this evening from northern Missouri to lower Michigan.

NWS’ Storm Prediction Center has placed parts of Michigan in an enhanced risk for severe weather in a release issued August 29.

The report by NWS also said that isolated severe thunderstorms may develop across parts of the northeastern United States.

“Thunderstorms associated with marginal wind-damage threat may impacts the south-central Plains through the Ohio Valley and lower Great Lakes region”, it said.

The areas with the highest risk of being affected are Traverse City south, Clare, Manistee, Ludington, Muskegon and near Grand Rapids.

Grand Rapids, Michigan was put under a flood watch Tuesday and was extended to Wednesday last night.

According to NWS, damaging winds and hail are the primary threats, but there is a risk of flooding rains and tornadoes as well.

The line of storms may weaken on the east side of the state, but some areas in central and southern Michigan could get four inches of rain.

NWS said: “A deep surge of warm, moist air is being advected in from the Gulf of Mexico, which is clashing with the colder airmass to the north.

“This is resulting in scattered to numerous showers and thunderstorms along the frontal boundary.

“These showers and thunderstorms are being exacerbated by a strong area of low pressure embedded within the boundary which is currently located over the Great Lakes region.

“It is expected to move towards the Northeast throughout the day.”

Michigan’s continued risk comes after a ‘bow echo’ tornado that raged through the state on Monday left thousands without power.

A bow echo, also called a quasi-linear convective system (QLCS), is shaped like an archer’s bow and can produce severe straight-line winds occasionally leading to tornadoes.

They are most common during the spring and summer and are known for causing major damage.

Mark Torregrossa, an NWS meteorologist told MLive.com yesterday: “The tornadoes are rain-wrapped and what you experience is a two-phase severe weather event.

“You would be hit by a strong gust of wind as the thunderstorm starts, and then the rain really picks up, and the wind intensifies.

“Finally, the wind-driven rain is blowing horizontal and coming from various directions.

“It’s a short-lasting event, only a minute or two.”

Over 100,000 have been without power on Monday, and although some electricity has been restored, the energy companies fear for more power outages.

Consumer Energy, who provides power in Michigan, said because more storms are moving in, it may complicate repairs.

“We will work safely around the clock until every customer is restored,” Tim Sparks, Consumers Energy vice president said in a release.

Power is expected to be fully restored by the end of Friday.

Phil Mickelson returns to scene of his most crushing defeat aiming for career grand slam at U.S. Open

Protesters in MAGA t-shirts and hats march maskless through Target shouting 'take off your mask!'

High blood pressure symptoms: Are you struggling to perform in this way? Warning sign

James Bond: Bond girl MISSED OUT on a spin-off after film success – 'It was disappointing'